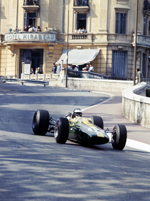 Jim Clark remains an enigma. Forty-one years after his passing, racing fans are still fascinated by the greatest driver of the 1960s, but how much do we really know about this intensely private man? Well, if you read Motor Sport this month you’ll gain a rare insight into the true character behind the legend.

Sally Stokes was Clark’s girlfriend during the height of his fame from 1963 to ’66. Although she’d married touring car ace Ed Swart by the time of Clark’s death, she remained close to the double World Champion and cherishes her memories of their time together. But she has long since withdrawn from the public eye and rarely speaks about those heady, exciting days when Clark ruled the motor racing world.

So when Ian Wagstaff approached us with the offer of an interview with Sally, it didn’t take us long to say yes. We knew this could be a rare chance to gain some insight into Clark the man, and so it proved. Ian’s interview with Sally is touching, humorous and very revealing. If you revere Jim Clark, as I know so many of you do, you’ll love this interview.

We’re approaching the height of the racing season and the July issue of Motor Sport reflects that. Nigel Roebuck takes a nostalgic look back at his most memorable moments at Silverstone, which is preparing to host what could be its last ever British Grand Prix – although as I write those words I can’t help thinking they are so very hard to believe.

We also look forward to the Goodwood Festival of Speed, but this is no normal preview. As a bit of a coup for the magazine, event founder Lord March kindly agreed to give us his personal guide to this year’s event, naming the nine cars (and one motor bike) he is most looking forward to seeing blast up his drive on July 3-5.

Elsewhere, we have another coup: an inside viewing of Bernie Ecclestone’s incredible collection of Grand Prix cars. Rob Widdows travelled to the Bahrain GP, where Ecclestone put on a display of his cars for the first time. The collection is clearly a great investment, but from Bernie’s reaction to seeing the display it seems he does have a sentimental side after all.

There’s plenty more (as ever), but I must recommend the latest in Simon Taylor’s excellent Lunch with… series. For the first time he has interviewed a contemporary racing driver, and a man currently at the top of his game, too. Allan McNish is a modern sports car great and talks to Simon about the incredible highs and lows of his career. I must admit, I’ve always been a huge admirer of McNish and have been lucky enough to get to know him over the past 10 years. His performances at Le Mans and Petit Le Mans in 2008, and at Sebring this season, have cemented his stature as a modern racing hero in my book. He’s also one of the nicest, most eloquent blokes in racing – as Simon found out.