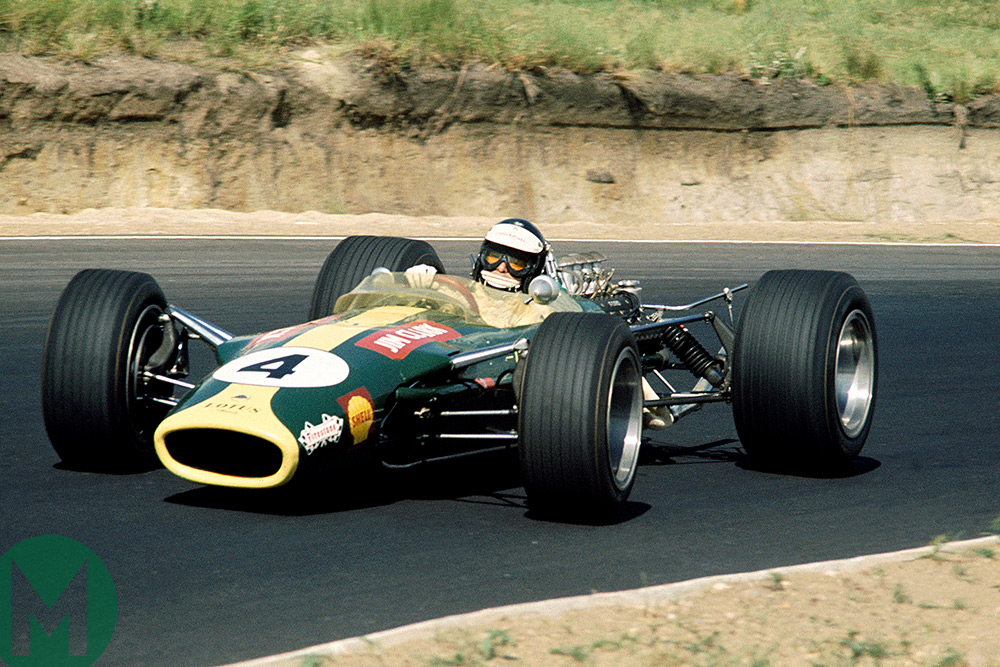 The 1968 South African Grand Prix at Kyalami marked a New Year as well as a new season.

It was also the end of an era.

Within weeks of his consummate victory – his 25th from 72 starts, from his 33rd pole position and incorporating his 28th fastest lap – Jim Clark had driven a Lotus 49(T) resprayed (by a Ford dealership in Canterbury) in Gold Leaf’s handsome livery.

Budgets – and a sponsor’s demands – were on the up.

Clark would also come within an irate phone call of driving a Lotus fitted with a rear wing.

Inspired by his positive experience of driving Rolla Vollstedt’s Indycar in November 1967’s Rex Mays 300 at California’s Riverside and fashioned from a section of helicopter blade, the item was removed summarily when my-car-my-rules Lotus boss Colin Chapman got wind of it.

Force was on the down even so.

The sport, Formula 1 in particular, was on the verge of a paradigm shift even before Clark’s sea change death.

It would be a gruesome year: Clark on April 7; his Lotus replacement Mike Spence during Indy testing on May 7; Ludovico Scarfiotti at Germany’s Rossfeld hillclimb on June 8; and Jo Schlesser in the unsorted air/oil-cooled F1 Honda at Rouen on July 7.

The innocence of Kyalami already seemed an age ago.

Some drivers had arrived late in Johannesburg because of delayed flights and so missed the first practice session.

Just as it didn’t seem to matter which tyres – nobody blinked when he tried Dunlops in place of official partner’s Firestones – were fitted to Clark’s brand new car during practice. He was fast enough on either rubber but eventually set pole – one second quicker than team-mate Graham Hill – on Firestones.

After a late panic, while an oil leak was traced and cured on race morning, Clark took the lead on the second lap of 80 and was the epitome calm under a torrid sun thereafter.

His final margin over Hill was 25.3sec and his average was 10mph higher than that of Pedro Rodríguez, surprise winner for Cooper, from the previous year. 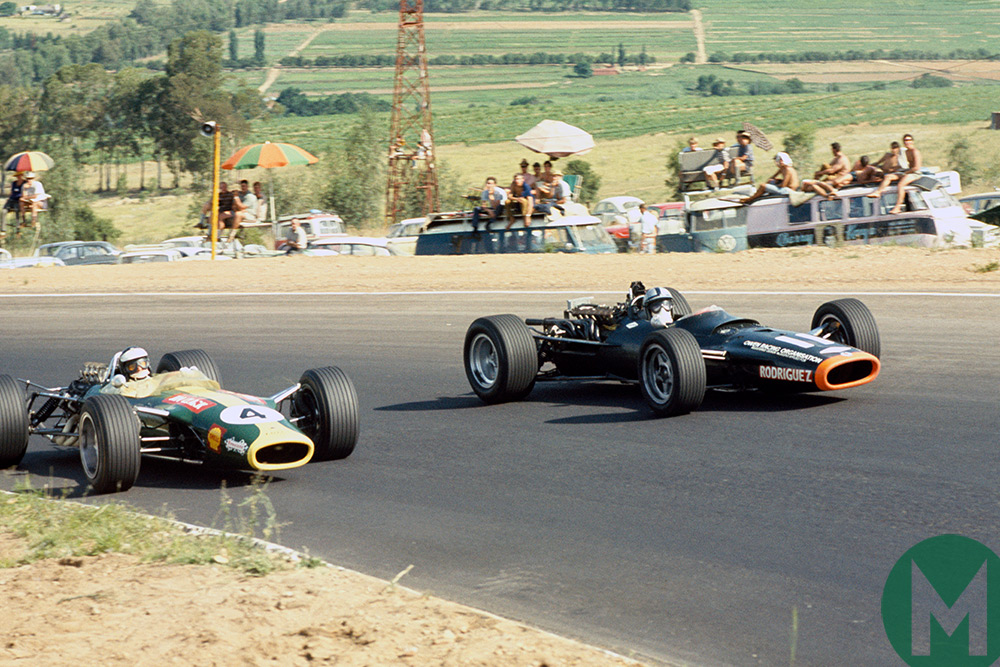 The track had been widened and resurfaced between times, changes reckoned to be worth 2sec per lap. Yet Clark had sliced more than 6sec from the qualifying and race lap records.

The Return to Power of 1966 was finally hitting home. And The King was on his throne.

The Pretender, however, had been re-empowered too.

Ford, realising the inevitable torpidity of an F1 dominated by Clark in a Lotus blessed with exclusive use of Keith Duckworth’s V8, had widened DFV’s circle.

In doing so it had kept Jackie Stewart from Enzo Ferrari’s clutches. Instead he signed for Ken Tyrrell, a man of solid convictions and whose firm handshake was his bond.

As captain of Uncle Ken’s tight ship, Stewart would become the epitome of the professional racing driver of the subsequent era.

In the shorter term Matra’s new car – Tyrrell was reluctant to become a constructor – was not ready and so Stewart drove an unpainted interim machine based on an F2 chassis in South Africa. He qualified it on the outside of the front – now arranged 3-2-3 – and led the opening lap.

Second until passed by the hesitantly starting Hill on lap 27, he was holding third when on lap 43 a conrod punched through the block.

Clark no doubt commiserated with his compatriot and friend while making a mental note: the pupil was close to graduation.

He had neither the need nor time to stew on such matters, however, for two months of fun in the winter sun beckoned. The New Zealand leg of the Tasman Series would begin in five days’ time.

Clark, his car still in traditional BRG with broad central yellow stripe – and running on Dunlops because of an embarrassing shortage of Firestones – led the opening round at Pukekohe until its adapted 2.5-litre DFW suffered valve-gear failure.

Rare mistakes at Levin and Invercargill were then sandwiched by victory at Canterbury’s Wigram Trophy.

Joined by Hill for the Australian leg, Clark scored the hat-trick – at Surfers Paradise, Warwick Farm and Sandown Park – that gave him the title ahead of Ferrari’s Chris Amon.

He would not race again for another month, however, as ‘real life’ closed around him once more. 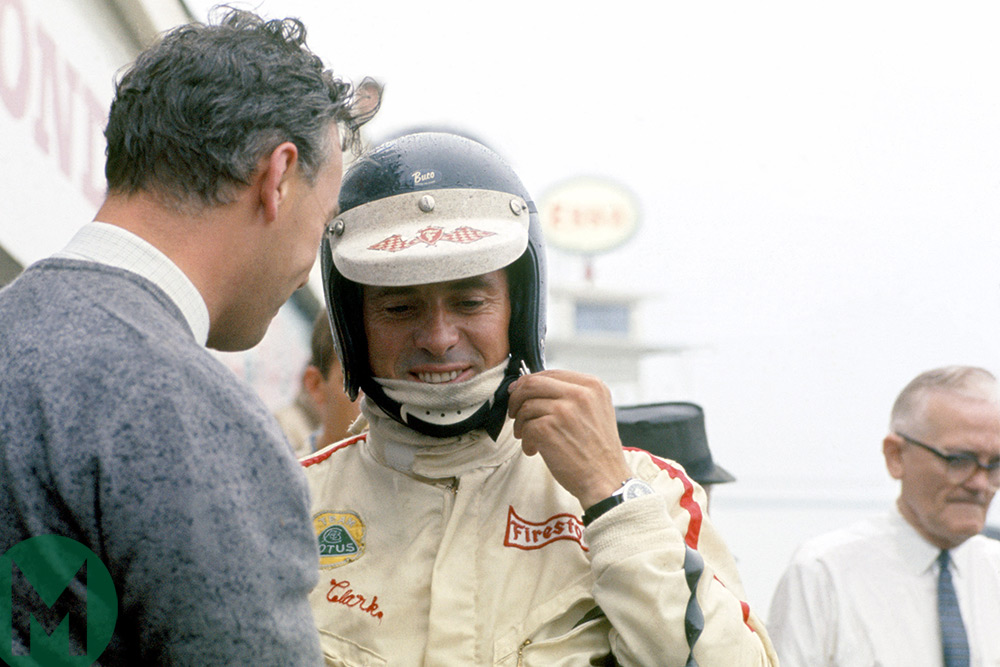 Unable to visit the UK for tax reasons, he would miss March’s Race of Champions at Brands Hatch.

And talk of his contesting the BOAC 500 sports car race at the same circuit in Ford’s new Alan Mann-built F3L had become a tangled web. Renowned for not being able to make up his mind out of the cockpit, the increasingly independent Clark put the story to bed by deciding to contest a clashing Formula 2 race at Germany’s Hockenheim instead.

It was as if his old car knew…

His Kyalami winner had been immediately transferred to Rob Walker’s privateer outfit and driver Jo Siffert, desperate to impress now that he had a competitive car on his hands, promptly crashed heavily during practice at Brands.

The wreck was returned to the team’s Pippbrook Garage near Dorking in order that it be stripped prior to a rebuild in readiness for the International Trophy at Silverstone in April.

Unfortunately, a spark from a drill ignited fuel vapour and a blackened chassis R4 was seared, twisted and ugly, into the ashes of motorsport history.

The near future held even darker days.

From the Archive: The shock of the news