This weekend’s Italian Grand Prix marks the 40th anniversary since the death of Jochen Rindt, who was killed at Monza in practice for the 1970 race. Having been that season’s dominant driver for Lotus – first in the 49B, then in the 72 – he came to Monza with 45 points and a 20-point lead over nearest rival Jack Brabham. It would be enough to confirm him as champion two races later when Ferrari’s Jacky Ickx, by then the only man who could overhaul Rindt, finished fourth at Watkins Glen. The three points he scored meant Rindt would remain out of reach and become Formula 1’s first posthumous World Champion. 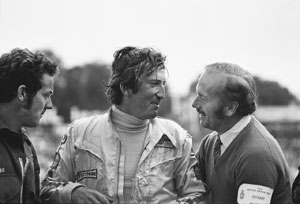 He was also Austria’s first World Champion, and in his home country he remains feted to this day.

A hugely charismatic figure, Rindt was not, however, universally popular and some of his rivals, in particular, considered him aloof, even arrogant.

Fifteen of the 26 drivers entered for the 1970 Italian GP are still alive and to commemorate a majestic driver, cut down in his prime, we’ve spoken to all but one of them. Here are some of their recollections, with more to follow in the run-up to this weekend’s race at Monza. 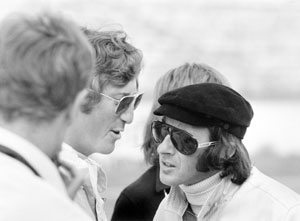 “By the time the race came around a lot of the immediate emotion had somewhat reduced. The day before had been very traumatic. Helen went to the hospital with Nina and that’s never a nice thing for a wife to do, to look after another wife.

“I think I finished second. I can’t remember where I was on the grid [he was fourth]. I went out and did quite a good qualifying after Jochen died. It’s in Winning is not Enough. Tried the March, went back to the Tyrrell, and then the March. As a racing driver, when the visor goes down and the lights go out, you have to get on with it. Driving a car, you are so totally consumed by what you are doing, you’re never allowed to be distracted. In that respect it was maybe it was one of the advantages I had: being able to block things out. I always tried to remove emotion and I was able to do that. I had won the championship the year before. From about halfway through ’68 I suddenly matured mentally and was able to manage everything better in my own head.

“That was a bad year, 1970. Bruce McLaren and Piers Courage were killed, and of course Jochen. It was quite difficult to deal with these things, because it’s not just at the track, and seeing the things I saw. It’s brought back to you the next week because of the funeral, and two months later there’s a memorial service. Monza was one of those circuits where we didn’t have a problem with safety. We’d refused to go to the Nürburgring and that was a big deal. Jochen was part of that with me.

“There’s always emotion involved at the start of the race. I was lucky enough to be able to remove most of it. I can’t remember much about it. To finish second in the March was a good result.”

And the Coke bottle-smashing incident after qualifying?

“I make no excuses for that. I’d been to Jochen. I’d been to him and come back to Nina, who had disappeared with Helen. Then Ken…

“Going back out was the right thing to do. The barrier had been fixed, but I suppose because of what I had seen when I went out I was in tears. But when I had the visor down that was when I did my qualifying time, which was the best lap I had ever done at Monza. I didn’t have a death wish. But as I came back in, my best friend John Lindsay handed me a Coca Cola. I took a drink and I will never forget I had it in my hand and I was so angry, I took the bottle and smashed it against the concrete wall that separated the pits from the track. That was my emotion. But not in the race. That’s what I remember.” 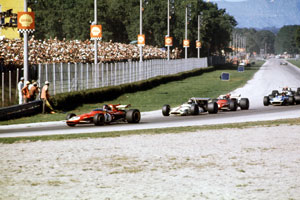 “I remember that most of us were staying the Hotel de Ville on the edge of the park. I had breakfast with Jochen’s wife and we went to the circuit together. We certainly all knew each other.

“Jochen had certain people he wanted to associate with and others he didn’t. He tended to be very self-centred, which isn’t unusual in a successful racing driver. I wouldn’t count him as a friend. He associated with people, I believe, who were as good as him and then he’d make a judgement on the others and didn’t give them space in his life.

“We raced together in Formula 2 the year before and then again in F1. Colin Chapman, Jochen’s boss at Lotus, saw Jochen as a replacement for Jim Clark, and he was probably right about that.

“It was a very dangerous period for motor racing. Lots of us were getting nailed. The cars were not as safe as they are now. They tended to catch light in a crash. No fuel bags. In that situation, it was a bit like being in the military, I imagine. There was no point in dwelling on it. If you were dwelling on it for too long, you weren’t doing a good job. You were better off doing something else.

“I didn’t dwell on it. I knew there were people dealing with the situation so I shut myself down. A few drivers were able to engage with the death of another driver, perhaps because they needed to immerse themselves. Certainly Jackie Stewart felt he had to be involved because he was pushing to get improved safety standards. But I just went my own way and thought ‘there’s another one of us gone and it will never happen to me.’

“No remorse. No sadness. No tears. As far as I was concerned Jochen was just gone. Looking back it was probably an inappropriate way to behave, but I suppose a number of others were exactly the same.” 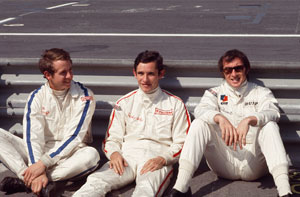 “Not winning at Watkins Glen was such a release. How could you beat someone not able to defend his own chances? The fact that Jochen won the World Championship was the most perfect solution. As for me not having won, it doesn’t create any kind of sorrow at all. Now, when I think back, I feel so sad for all those around me – probably more talented than I was, and certainly more dedicated, who didn’t have that extra piece of luck that made you a survivor. That was the great thing about that era – survival.”