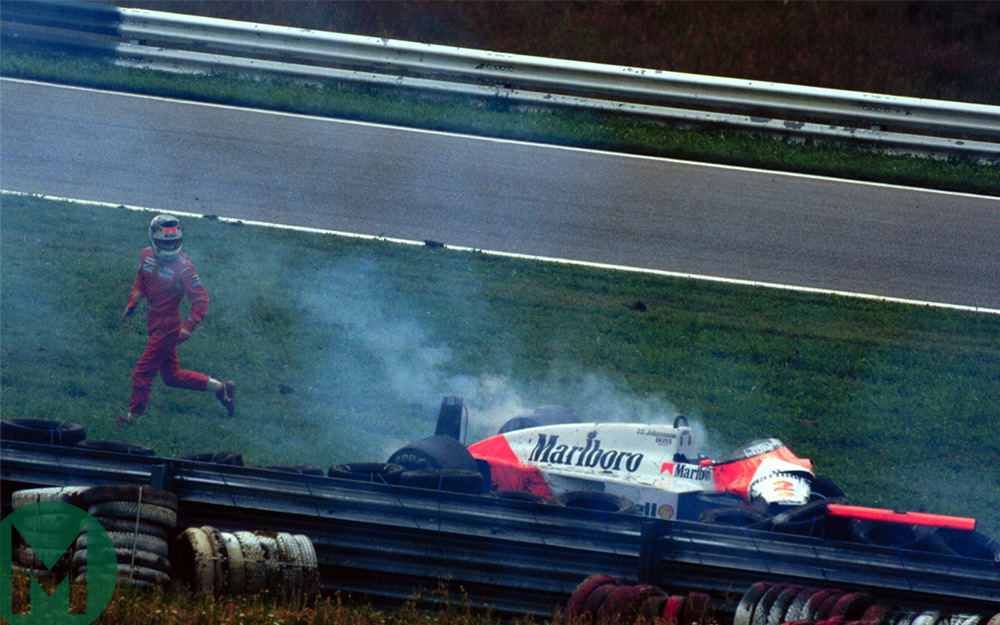 There was a pastoral feel to the old Österreichring. Nestled in the foothills of the Styrian Alps, its run-offs were lush meadows, its spectator banks speckled with wild flowers. One half-expected Bambi to gambol across the track…

“It was very small, thank God!” says Stefan Johansson, the disbelief and relief still in his voice 30 years after the fact. “Even so, another couple of feet to the left. No, less.

“I had no time to react. None. The signal from my brain to brake didn’t even reach my foot it happened that quickly. I was doing 170mph over a brow and the deer’s just sat in the middle of the road.”

It was during Friday’s first practice session for the 1987 Austrian Grand Prix that Sweden’s ‘Little Leif’ met the local fauna on the approach to Rindtkurve.

“It tore off the left-front suspension – there were four gaping holes where the pick-up points had been – and that corner carried back and sliced off the sidepod and rear suspension. The whole left side was pretty much gone.

“It was morning and the grass was moist. In those conditions you accelerate when you leave the track. But there was quite a long run-off and so I had plenty of time to think about it. I prefer accidents when you spin and – boof! – you’re in the wall.”

Though his McLaren MP4/3 was wrecked and he’d broken a rib, Johansson knew that he was lucky to be alive. The poor deer was not so fortunate.

Johansson: “Apparently it had been walking around for a while. So it was a mystery why the session hadn’t been stopped.”

Team boss Ron Dennis was furious, and the pilfering of salvageable parts from the wreckage further soured his mood.

This was the start of the crazy weekend that consigned this beautiful, challenging venue to history.

Two start-line pile-ups on a section of track hemmed by Armco caused no injury other than to the Österreichring’s reputation: a deer in the headlights of an impatient global TV audience.

“The whole weekend was a disaster,” says Johansson, whose second chassis was one of 10 cars damaged in the second track-blocker. Luckily, McLaren had dashed, by thrashed Ford Transit, for a spare spare tub. It arrived Saturday evening and was built up overnight.

In it, Johansson was running ninth on the second lap – after a third start that was chaotic rather than calamitous (see below) – when he collected a puncture and was forced to pit.

“I got sent out too early [by Dennis],” he says. “One of the wheels hadn’t been tightened and the whole thing followed me: the mechanic, the gun, the nut [which struck an Arrows mechanic]. And then the [right-front] wheel fell off.

“I crawled back to the pits.”

He had finished on three wheels as runner-up in the German GP at Hockenheim. In Austria, however, he dropped to last.

As he had after his Bambi carambolage – he was fifth-fastest in Saturday’s wet session – he exhibited the spirit that epitomised his career: “That’s just what you do: get back in it and get back on it. If you start thinking about it, doubting, it’s probably time to stop.”

Setting his fastest lap on his last lap, Johansson finished seventh, two laps behind the victorious Williams of Nigel Mansell – contesting his 100th GP – and one place behind team-mate Alain Prost.

The latter had started from the pitlane along with five others. Their rush to beat the course cars to the first chicane smacked of Keystone Kops.

Johansson’s had been a gritty performance that deserved – but did not receive in less munificent times – a championship point to alleviate the pain of that rib grinding through this 150mph track’s high-g right-handers.

“Willi Dungl was doing the physio for us and he strapped me up as best he could,” says Johansson. “He then did this reflexology thing on my feet. It’s extraordinary how much that eliminated the pain for a period of a time: about 40 minutes.

“Being strapped in the car was almost like being in a cast and that helped a bit, too.

“But I loved that track even so. It was probably my favourite. Superfast, you were balancing the car on the limit the whole time. In a turbo F1, it was fantastic, awesome in every way. Very cool.”