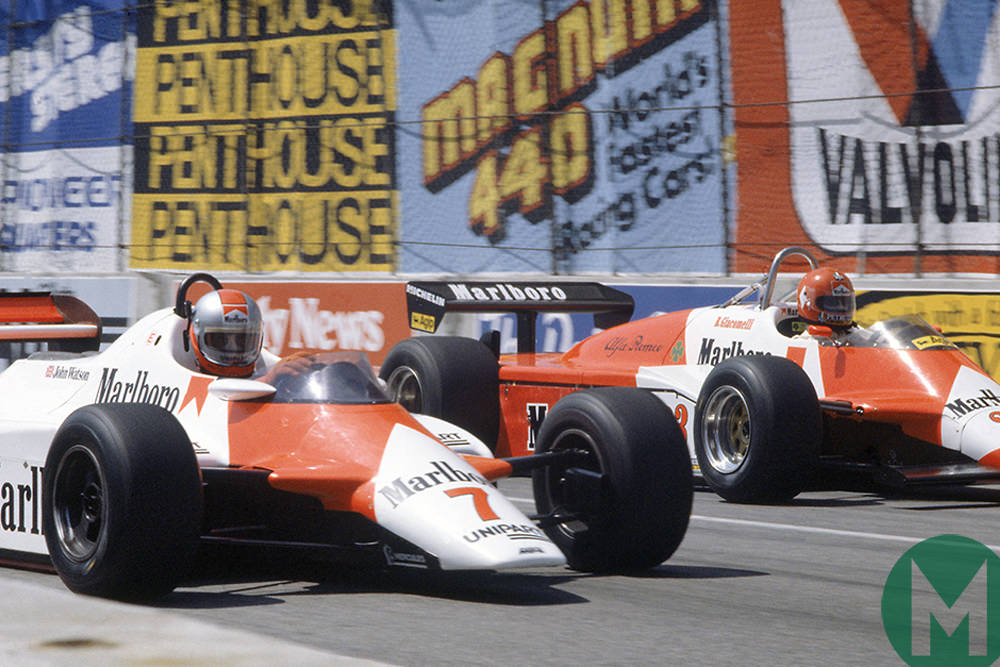 Already I’ve stumbled across what is sure to remain my favourite stat of the year.

It refers to John Watson’s points finishes for McLaren in 1983 – and it is this: an aggregate improvement of 102 places over his grid positions across those six races.

Had he softened his MP4/1C’s rear anti-roll bar earlier than he did in Detroit, it would have been 103: “Suddenly the car was much better. Not as loose. I’m not sure I’d have caught Alboreto for the win though.”

He finished third that day from 21st on the grid – and set fastest lap with five to go – yet it’s a performance overshadowed by his 1982 Detroit victory from 17th.

At Long Beach in 1980, for instance, he finished (a lapped) fourth from 21st: “I don’t even remember finishing that race.”

To be fair it must have been a bit of a blur.

Period unreliability played its part no doubt – but, on the other hand, there was no DRS.

‘Wattie’ will concede that probably he ought to have been a row or two or three nearer the front – like team-mate Niki Lauda tended to be – but that’s not to say he couldn’t qualify: for a goodly chunk of 1977 only Mario Andretti’s Lotus 78 ‘wing car’ was consistently faster over a single lap than the Ulsterman’s Brabham BT45B-Alfa Romeo.

But some ho-hum McLarens – “M28 was a disaster and M29 not much better” – and the rise of the turbos limited his chances to shine in what many consider the final arbiter of speed and therefore a GP driver’s worth.

And today he’s somewhat cheesed about it – on Daniel Ricciardo’s behalf: “He’s an outstanding Grand Prix driver: the best overtaker in the field. Yet Red Bull is placing its chips more on Max Verstappen.

“What’s more important: being a tenth or two quicker or winning races?

“Daniel’s got a good racing brain. He understands a lot about what makes either the car work or how to use its/your advantages during a race.

“Last weekend’s was a copybook race for a guy starting on the third row and winning: he didn’t bump wheels or bang into anybody; he waited for his chance and then took it.

“He understands – like Jackie Stewart did – that you don’t need to be on pole and lead every lap to win a GP.”

Indeed all six of the charismatic Australian’s victories to date have been achieved from the second row or beyond.

So how does he do it – in a car with a good chassis hampered by a lack of power and straight-line speed?

“All his passes [in China] were made in a straight line – and that’s not by chance,” says an empathetic Watson. “He wasn’t trying to pass into a closing gap. He wasn’t trying an impossible move around the outside. He makes his passes before the other guy can turn in. He doesn’t lock up and he makes the apex.

“He comes from a long way back and so there’s a lot of positive thought in his passes. He’s fully committed.

“Ricciardo’s built a reputation and his rivals recognize it. They know who the racers are.

“Bottas was criticised for not having a go at Vettel in Bahrain. I think he did the right thing for Bottas at that time: he needed points after his Melbourne disappointment.

“Besides, would Vettel have been prepared to step aside? Probably he thought, ‘I don’t think this guy’s going to do it.’

“Whereas Ricciardo’s move on Bottas in China was about as squeaky as you can get. He [Valtteri] shut the door as much as he dared – but knew that Daniel was coming through. Had it been Räikkönen – although I’m not sure Kimi would have gone for it –Bottas probably would have closed it completely.

“It was important that Ricciardo maintained his momentum at that precise moment. That’s key. Overtaking is partly physical but also a frame-of-mind thing.

“For instance Niki should have won in Detroit in 1982. But he thought the place a waste of space – ‘You can’t overtake here!’ – and so spent lap after lap sat behind Pironi and Cheever. He’d pre-judged it.

“Then along comes silly old me – thicko John – and I pass all three in one lap: bosh, bosh, bosh! Suddenly Niki puts in another computer chip and passes Cheever and Pironi.

“Eventually, though, he collided with Keke Rosberg. Yet I’d had no trouble passing Keke [for the lead]: he knew I was quicker, saw me coming – I made a positive clean pass – and he didn’t even try to block me.

“I thought I was a better driver than Niki in terms of overtaking and racing, i.e. able to hustle a car. This in part stemmed from set-up: I preferred a car that steered from the rear and consequently that gave me more options in a race context.

“Niki wasn’t a risk-taker; he assesses and calculates. He flies ’planes by the book. It’s how he runs his life. His mantra. And it’s worked for him.

“He was a good qualifier. Very precise set-ups are good for quali but, I believe, not as flexible in racing.

“Niki’s greatest strength, however, was pulling a team around him and subjugating the other driver.”

And the incumbent Lauda summoned every last byte of that famed mental strength to beat the faster man.

Having come through from 11th to finish second in the decider.

In the penultimate round he had finished fourth from 15th.

** First two on the road disqualified