Practice in Korea suggested that Mercedes had a real shot at stealing pole position from Sebastian Vettel and Red Bull, but in the end it was business as usual as the World Championship leader made it look all too easy. 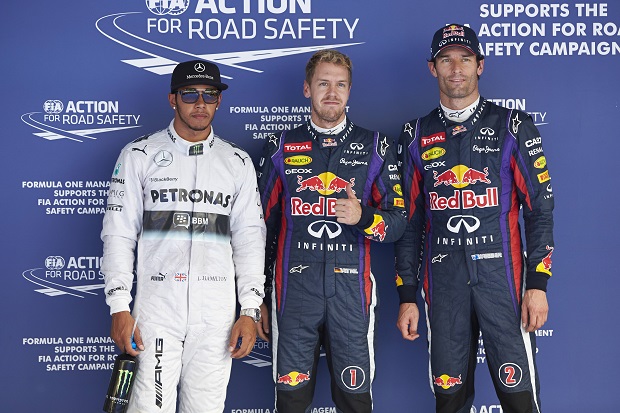 In Singapore Seb was so confident after his first run that he stepped out of his car and watched on TV as others tried to topple him. This time his advantage wasn’t so decisive after the first runs, so he headed out for a second go, leaving himself just enough to get across the line to start his final lap. Before he completed it he knew that no one had gone any quicker, so not for the first time he aborted it and cruised into the pits.

Nearest challenger Lewis Hamilton did make a marginal improvement on his second run, but it was not enough. The final margin was only 0.218s, but for Vettel it was a third consecutive pole – and the 42nd of his career. Mark Webber, who might have had a shot at beating his team-mate, also aborted his lap, because he made a mistake and would not have gone any quicker. He still managed third, but thanks to his Singapore grid penalty, the Aussie now tumbles down to 13th.

With due respect to Vettel and his team and the great job they are doing – and here they had to deal with the fact that the super soft tyre couldn’t last a full lap – it’s fair to say that most observers would have liked to have seen an alternative outcome. Not that a more interesting result would have added much to what is likely to be a very small crowd on Sunday… 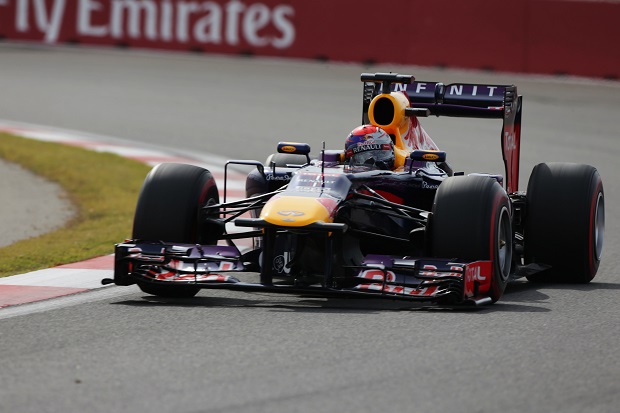 However, we still have the prospect of an entertaining race. The chance of rain appears to be receding, but even if the dry there’s plenty of evidence to suggest that there will be a lot going on. This is after all a track that, helped by consecutive DRS zones in the first sector, encourages overtaking. The tight corners that follow those straights also encourage contact, as we have seen many times in the past, and given that in many places run-off is limited there is also the prospect of safety cars being added to the mix. And inevitably tyres will be a major factor.

The DRS zones mean that Vettel could be under threat if Hamilton or anyone else manages to hang on to him.

“To be honest with you, it largely depends on tomorrow’s conditions, the wind,” said Vettel. “I think we had a race two years ago where there was a massive head wind. It’s a long straight from turn two down to the hairpin in turn three. Obviously it gives you flexibility to have the DRS zones right after each other, also on two quite long straights, so we’ll see. I think you can pick your corner, but there’s another straight after that where you could lose the position in case you gained it in the first place, so the same goes for turn one as it does for turn three.”

Starting alongside Vettel, and having shown good race pace in practice – this is a track which is front rather than rear limited, and that favours Mercedes – Lewis looks pretty well placed. But when I asked him if he thought he had the pace to get ahead of Vettel, he was cautious. 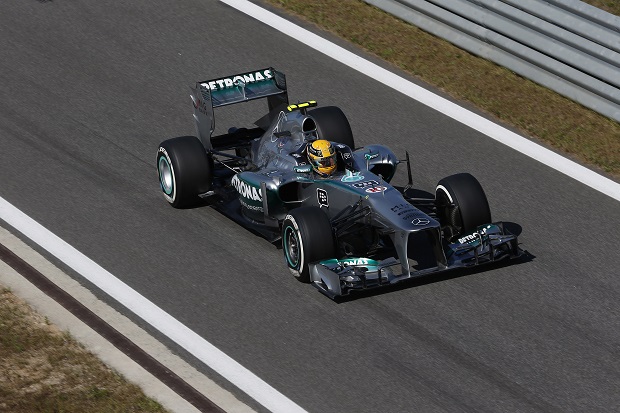 “It’s going to be very hard,” he said. “That’s what it seemed a couple of years ago, or the last couple of years, to follow a car that is that competitive. Most likely if he gets away in the first lap, that’s it, unless he has a problem. So I’ve got to try to get him before that. The start of the race is crucial.”

Red Bull and Mercedes may have secured the front row spots, but both are casting a wary eye on Romain Grosjean. Bumped up from fourth to third by Webber’s penalty, the Lotus driver could be the real dark horse, given the good long run pace that the car showed on Friday. After a mistake in Q3 Kimi Räikkönen starts only ninth, but with a good strategy he could yet work his way up the field.

Fernando Alonso and Ferrari can’t be ruled out, certainly for a top three finish. In the last three races the Spaniard has gone ninth to second, fifth to second, and seventh to second. Here he starts fifth, so don’t bet against him standing on the podium at the end. He’s been brilliant at making places off the line this year, but he admits that here it’s the later corners on the first lap that could give him a chance to gain ground. 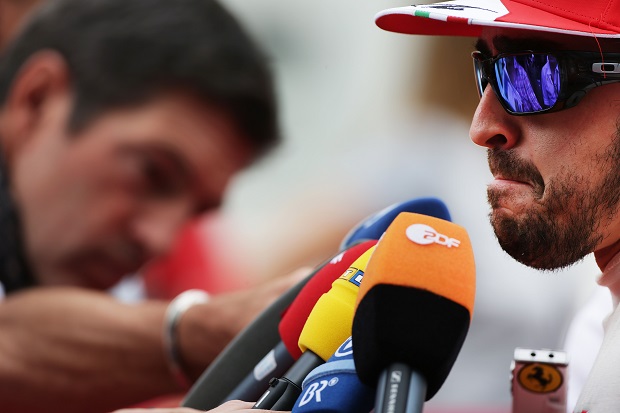 “It will be one big opportunity for us,” he said this afternoon. “The start normally is good. It’s true that here the first corner there is not enough space to really attack, we pass one by one in Turn One, so we will try to attack in Turn Three and Turn Four, there is always some action in the past here. So we’ll see what we can do.

“But the race will be long, and apart from the start, whoever has the pace tomorrow, it will be not to difficult to overtake with the two DRS points. The start will not be as crucial as maybe Singapore or whatever, that the positions are more stable. We need to do a good start, that’s for sure, and then we need to keep a pace that today we didn’t have, and yesterday we didn’t have also. Normally on Friday we saw some optimistic pace for Sundays.”

In other words he’s not entirely confident that he will be able to take the fight to those ahead.

“We need to see tomorrow, because it’s still very open. We can be in the podium or we can be out of the points, depending on how is the pace in the race. For this we need to prepare really carefully for tomorrow’s race. It’s not so straightforward that on Sunday Ferrari will improve and we will have a good degradation and pass people. It’s not so clear this time, and we need to work very hard.” 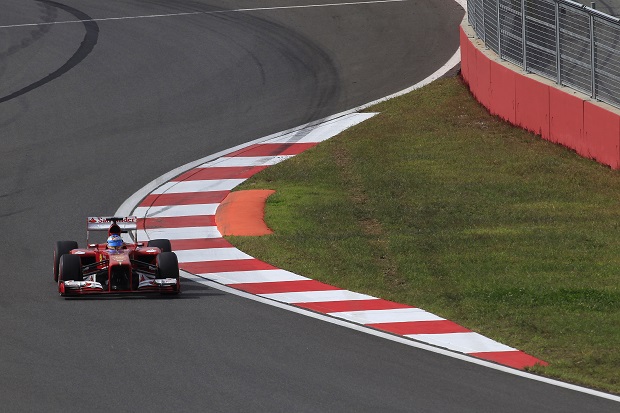 Alonso for one believes that we will see some passing: “If you have the pace it’s not too difficult to overtake, you catch the car in front of you in the first one, and then you attack in the second, it should be not too difficult to pass. It’s good to see some action tomorrow in the race. As I said if you have a quick car tomorrow in the race you can perform really well, and this is one of the things we have to look at. For example Webber starting at the back, with the possibilities of overtaking more or less easy here, he will be strong in the race.”

Indeed Mark could provide a little cameo tomorrow, although it won’t necessarily be easy for him to progress, even with a car as quick as the RB9.

The bottom line is that there’s potential for excitement up and down the field, so it will be worth getting up for on Sunday.

“If we look at Friday, then I think we can have quite an exciting race,” said Ross Brawn when I asked for his views. “The difficulty is projecting what we saw on Friday into tomorrow, and if we can hold that up. I think today the times are pretty close, and we’re encouraged by our pace. I don’t think we’ve seen Sebastian’s true pace yet, but hopefully we won’t get a repeat of Singapore…”