There were definitely more plus points than negatives about being a student, from what I remember. The biggest downside, of course, was a severe lack of cash and correspondingly, the total absence of wheeled transport. I didn’t even own a bike and used to walk everywhere, which with hindsight was strangely liberating.

The knock-on during those increasingly dim and distant three years was that student life put a cap on trips to race tracks. Twenty years ago, as Ayrton Senna was pulling off one of the greatest opening laps in Formula 1 history, I was watching on TV – in a rage of growing jealousy. 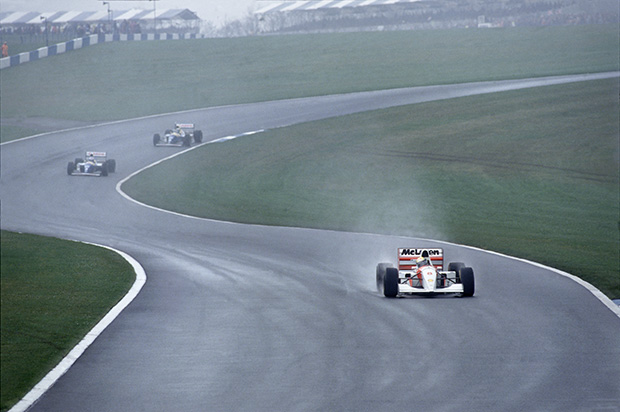 The crowd at Donington Park on that April day was small by F1 standards, largely because of the horrible weather. Those hardy souls on the banks of the Craner Curves, the Old Hairpin and McLeans were a sorry sight – and boy, how I wished I was among them.

Those thoughts came flooding back as I read Simon Arron’s story about his memories of the European Grand Prix of 1993. While I was scratching my head trying to decipher Beowulf, he was already more than 10 years into his race reporting career. He had a job to do that day, but from his position on the inside of Redgate that didn’t stop him marvelling at what he was witnessing first-hand (damn him).

Senna’s performance that day and his humiliation of the Williams team became defining moments of both his career, and perhaps even more of the wonderful parkland circuit he mastered. Donington’s greatest days were probably the pre-war ‘Silver Arrows’ GPs of 1937 and ’38, but post-war – at least in terms of cars rather than bikes – this was it. And of course, it would never be repeated.

Today, we’re just thankful Donington has survived after the British GP debacle of a few years back. The place is getting back to its best, thanks to the hard work of Kevin Wheatcroft and the team led by Christopher Tate, and the historic festival on May 3-5 is a shining example of how things have changed for the better in a relatively short time.

Quite rightly, to mark the 20th anniversary of that incredible day the festival organisers have chosen Senna as the main theme this year – as we do with the cover story of the May issue. Fittingly, it’s also 30 years since the great Brazilian made his F1 debut at the track, in a test for Williams. Along with the article on 1993, Simon has also revisited that groundbreaking day 10 years earlier, witnessing the return to the track of the FW08C in which Senna so impressed Frank Williams – albeit not enough to sign him straight away! 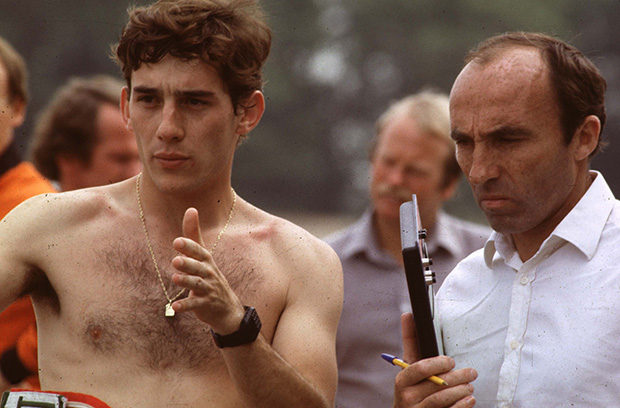 Simon’s words spurred me to revisit the late Tom Wheatcroft’s memories of that European GP in ’93. Back in 2007, he had lunch with Simon Taylor and here’s what he recalled of that special day. It’s a grand tale.

“I shouldn’t have been there. I was very ill in hospital because I’d just had a heart attack, then I’d had an operation, the whole do, but on the Saturday I told the specialist I had to go because I had a Grand Prix on. I got to the track and I saw Bernie. I could see from the way he looked at me he thought he’d better get his money quick before I snuffed it. Rrrrr rrrrr [Simon’s best attempt at putting on paper the sound of Tom’s unique laugh…].

“Then on Sunday someone said I should drive the W154 Mercedes in the demonstration laps before the race. After all the struggles to get the race to happen, I wanted to do it. The specialist were very unhappy: he said I were mad, but he told me whatever I did not to let any cold air get to my chest, to wrap a silk scarf around my mouth. Off we went, and it were raining heavy. I couldn’t see much, and I’d never driven the W154 before, but down through Craner Curves we went, and I thought, ‘This is grand’. Then all of a sudden I can’t breathe. I pull the scarf off my mouth, and when the cold air goes in it’s like a hundred little bayonets inside me lungs jabbing to come out. Then I realised I was off line, and I thought, ‘you booger, you’re going to stuff it’.

“I tried to brake, and then we were in the gravel. They hooked me out with a tractor and I carried on for my four laps, got it back to the paddock, and I were just finished. I were gone. They lifted me out of the car, took me to the medical centre, took my overalls off, put oxygen in me. I tried to fight it, then I passed out. 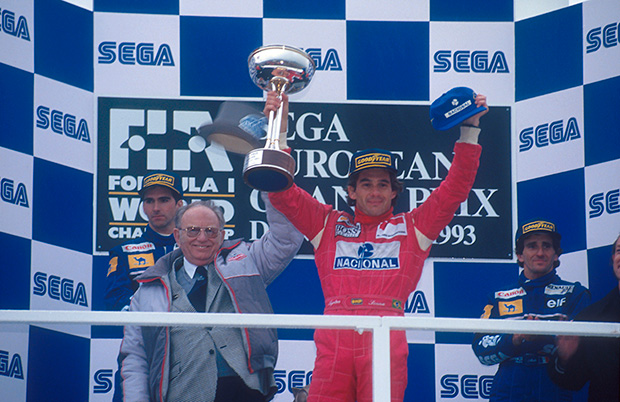 “I didn’t think I’d make it to the podium to present the prizes, but I did get there, and once I was up there with Senna, wearing me top hat, I felt as strong as a bulldozer – 18 years old again. Then I went home to bed.

“Of course, because of the dreadful weather and the cold, we only got 50,000 spectators. Between you and me, I lost £4.2 million that weekend. But it were bloody wonderful. At the FIA prize-giving in Paris that year we got the trophy for the best-organised race. Really tickled me up, that did. Max [Mosley] came out of the curtains one side of the stage, Bernie came out of the other, trophy were so big it were all he could carry.

“When I went up for it, everybody stood and cheered. Afterwards Bernie come up and he said, ‘Tom, you can run the grand prix next year. I can get rid of Silverstone’. I said, ‘No thanks, Bernie. It’s proved two things to me: the circuit’s no good for a grand prix unless I put the structure in and spend the money, and you can’t run two grands prix in one country. Even with good weather I’ll still lose £2m, maybe two and a half.” 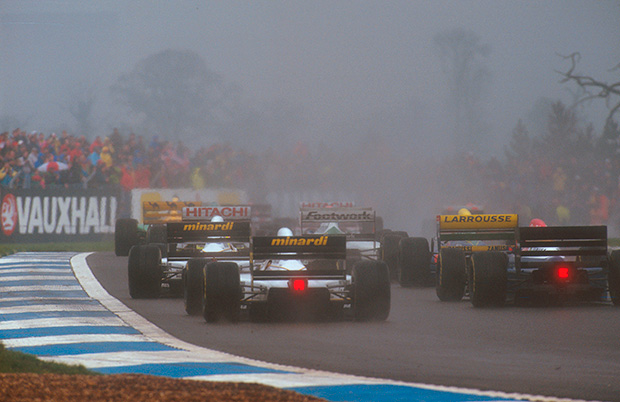 No wonder we still miss him, eh?

Elsewhere in the issue, Nigel Roebuck reflects on the Australian Grand Prix (we closed for press before Malaysia – for the outrage about S Vettel, see the website!) and 40 years of friendship with Chris Amon; Former Guardian journalist Richard Williams takes his Motor Sport bow to recall his visit to the last true Targa Florio, again 40 years passed; and Tony Brooks finally has lunch with Simon Taylor. I say finally, because we’ve been asking this wonderful racing driver and gentleman to take a bite with Simon for years. Now his autobiography has been written and published, he was happy to oblige.

You’ll also notice a few changes to the magazine this month. Yes, we’ve given it a facelift.

Why? After all, from what many of you have told us there was little wrong with how it used to be. The trouble is there are not enough of you out there!

The magazine market is getting ever tougher, especially when it comes to newsstand sales. Motor Sport simply cannot afford to stand still, to accept that we produce a magazine that cannot be bettered. That will never be the case.

The trick we have to pull off is to keep our loyal readers satisfied with a mix of stories from every corner of the motoring world – while also appealing to those who used to pick it up, but haven’t done so for years, and perhaps more importantly those who’ve never considered buying it before.

The new look is our attempt to make the magazine a little more accessible, without losing our voice that speaks directly to a knowledgeable and well-informed readership. There are no fewer words in the May issue than there were in the April edition – in fact, there might even be more. And the mix of content is eclectic as ever.

Change is hard, especially with a magazine that is so well loved. But we’re excited by the tweaks. We hope you like them, too.