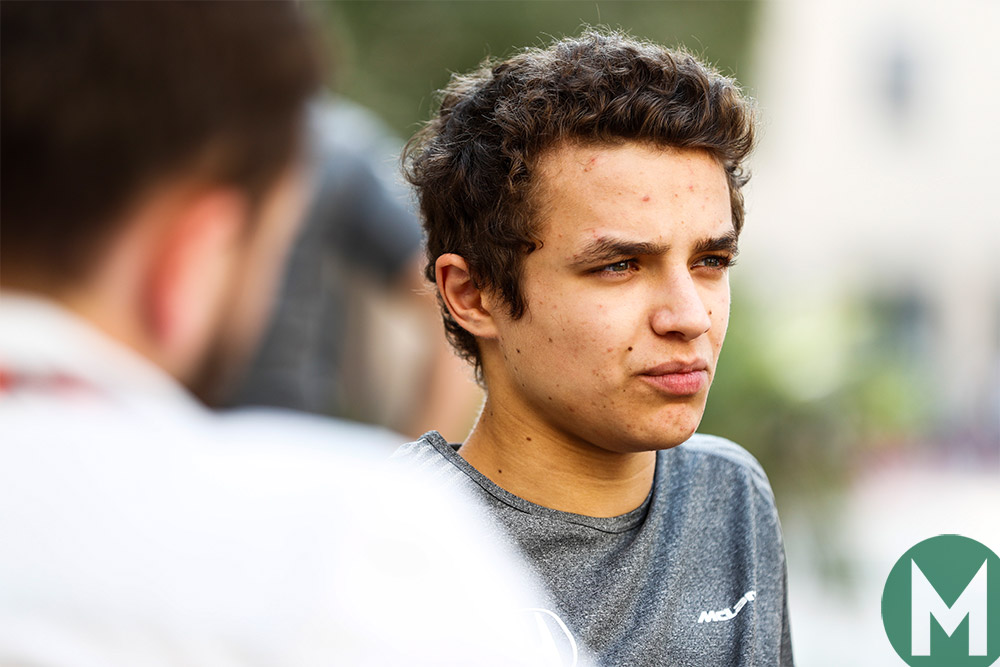 This is Formula 1’s Next Big Thing. McLaren’s star in the making under the wing of Zak Brown, marketing man and supposed star maker, and spending his early career at close-quarters and absorbing the star quality of Fernando Alonso.

It’s no wonder he is fidgety, as we sit in the metropolis of skyscrapers-with-wheels in the vast paddock of Daytona’s International Speedway RV park. He’s on the verge of what is arguably his biggest stage yet, with more eyeballs arrowed at him, under more scrutiny than ever before, with the toughest benchmark against which to measure himself.

Sat across the small and cramped table is Lando Norris, dutifully and openly answering questions, all the while clicking his laptop open and shut.

His team-mate had just nosed their United Autosports-prepared Ligier into the barrier, costing valuable seat time for the whole team, and Norris wastes no time in a making a light-hearted dig. It’s well received, no hint of malice; what we see on social media is what we get with Norris, it seems. There’s no corporate mask, and maybe Alonso’s recently relaxed aura has rubbed off on him too.

Norris could be excused for a slight grumble about his car’s relative – and unrelated to the off – lack of pace. “Zak knew we would have a good team in both cars,” he says, adding with a touch of irritation: “but we didn’t know the car would be so off the pace. Obviously sometimes your tyres or set-up doesn’t suit the track, but it’s rarely 1.7sec off. Most people will know that 1.7sec means it isn’t just the drivers…”

The line-ups in the two cars, despite a lack of experience, wouldn’t ordinarily be almost two seconds off: Norris, Alonso and Hanson were alongside Paul di Resta, Bruno Senna, Hugo de Sadeleer and Will Owen in the United Autosports pits.

“Zak just wanted some good drivers in the car,” continues Norris. “Fernando was given the opportunity to do things like Indy, but he wouldn’t have if he was battling for the world championship. But there still aren’t any other drivers doing things like that. Zak has been the guy that’s pushed for it; he wants to push McLaren out into other countries like America.

“Obviously he wants his team to do well, too. He wants to expand everything, not just McLaren but his own team United Autosports. When I agreed to do the race I didn’t know Fernando was going to be doing it, but I guess Zak did.”

As it was, the rate of attrition at the 24 Hours of Daytona was high because of a relentless pace of the front-runners. It evened the playing field, with cars dropping out and countless punctures throughout the field bringing both cars into contention. And then Norris flew. Rain came, and Norris outpaced all on track and announced himself to the sports car world. Brake issues dropped them back, and out of what was probable podium contention.

Most importantly, the event was a valuable learning exercise for Norris, working closer with Alonso and in a new environment. Further sports car racing outings having been ruled out, for now.

“I’m trying to get to F1, and he [Alonso] can teach me about that. I’m seeing how to go about a race weekend, how to develop the team, and how he drives. He understands this is a team game [at Daytona]. And even it wasn’t, I’ve been in the F1 debriefs and he’s open. He still tries to help everyone ­– even Stoffel [Vandoorne] – he doesn’t hide anything because he has got nothing to lose. He’s out here to do something different and enjoy himself. Therefore he’s helping everyone as much as we can, especially with us struggling.”

From Daytona, it was a trip to Saudi Arabia for the Race of Champions and then it will be on to Barcelona for pre-season F1 testing as McLaren reserve driver. It will be the first public on-track appearance for the McLaren-Renault partnership, and the change in atmosphere it has brought.

“There is an excitement,” he reveals. “The team has high expectations, they know how much of a difference it is going to be now with Renault. They know how much time they can find and they are very motivated to do so. There could be wins again. They’re not the favourites, and there are things to work on, but this is a step in the right direction.

“Being at the front brings a very different atmosphere, when you’ve put as much effort in, and struggled as much over the past few years, you get tired.”

For Norris, being anywhere other than at the front is uncommon ground – his career up to this point has been one of many wins and few disappointments. His cabinet houses the 2015 MSA Formula trophy, two Formula Renault titles and most recently the FIA Formula 3 Championship pot. So he’s earned his stripes to be in the promising position he is right now.

His next step career-wise – Formula 2 with series newcomers Carlin – has been left a high bar set by Alfa Romeo Sauber/Ferrari-bound champion Charles Leclerc. If Norris is to fulfil his obvious potential he has to follow Leclerc’s lead and set the series alight.

Except F2 is notoriously difficult for rookie drivers, let alone rookie teams. Only Nico Rosberg, Lewis Hamilton, Nico Hülkenberg and Leclerc have won it in their debut year. “That’s the benchmark, though it was slightly different circumstances for Leclerc with the dominant Prema squad. But when first entered the series it soon dominated, so there’s no reason why Carlin couldn’t come in and do the same, especially with a new car levelling the playing field.

“At the same time if we don’t start off quite so well, at least by the middle of the season we will know where we are and there will be no excuses not to be winning and beating other teams by the end. Initially, it might be tough, but Leclerc did it last year.”

Until the wins come, Norris has his own mature and grounded – but no less career-making – expectations instead. “It is an opportunity to learn how to push and build a team. McLaren wants me to learn and develop as a driver so that when I get to F1, I will have experience of the things many only think of when they’re in F1. It will make me more ready when the chance arrives.”

His options were open when he dominated the F3 championship. He could have followed Vandoorne and Pierre Gasly to Japan to contest Super Formula, and might Carlin’s move into IndyCar offer a possible holding ground if no F1 seat is vacated?

“IndyCar is something I would want to do,” he admits, having mulled it over. “It depends on McLaren, if they think it is a good idea to go and do it in year two. It could help me develop, it’s a big car and fast, but it’s very different to F1. It would be a case of working out whether it’s better to be building up those racing skills or to go to every F1 race, be with the team in the background and learn more that way.

“Super Formula was a serious option for 2018, though. Stoffel and Gasly have both said it’s a good car to learn in, it’s similar to F1 in terms of downforce and speed. In previous years they were just as fast in sector one at Suzuka as the F1 cars. It would have given me experience of driving a faster car with lots of downforce, pitstops and long races.

“But once we knew we could go with Carlin in F2 and put everyone together that we needed to, on Pirellis, on the Grand Prix tracks, in England and with the team, then F2 was the only option.”

Whatever happens in F2, the next step must wait and for the first time things are out of his hands. But he seems confident he’s ready, and has been ever since he tested a McLaren as winner of the McLaren Autosport BRDC Award. “Fernando is obviously going to do a better job than I could this year. But I am more prepared as a driver than I was two or three years ago, but I feel I could have driven an F1 car.

“What Max [Verstappen] has done by going from F3 to F1 is really impressive. When I think about my first days in F1 it is understandable how you can make that jump if you have the Friday sessions. Going from karting to F1 in basically two years?

“I feel like I could have been able to do almost as well as I have now, though now I’m physically ready for F1. In the short term, it depends on what Fernando does. I’ll know by the end of the year what the future is.”