Billed as the best ‘bang for buck’ team in Formula 1, Force India is now in administration – but it’s been in a similar position before 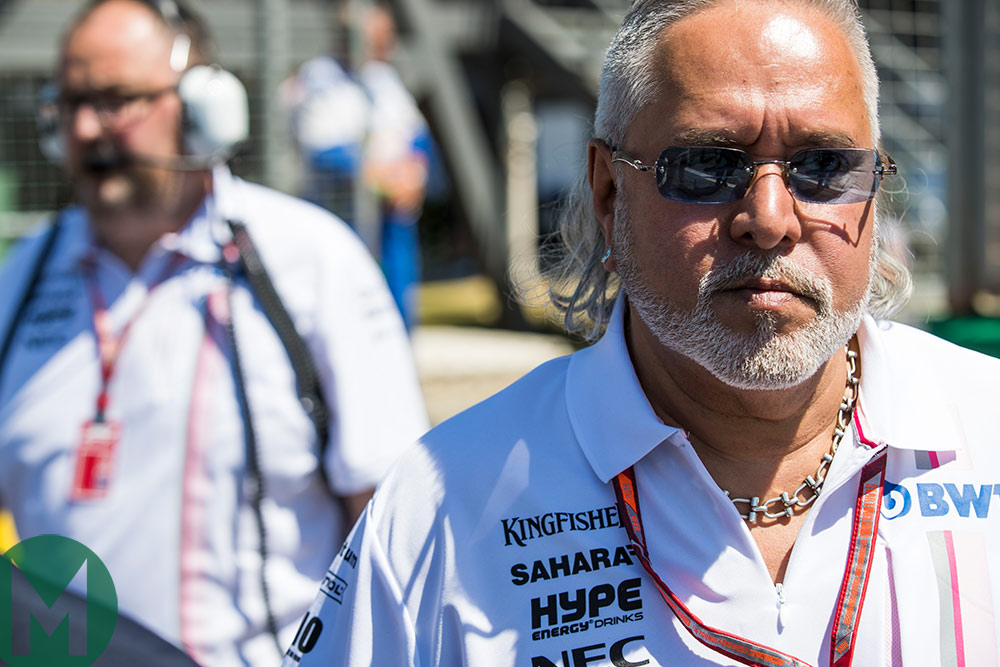 “Sahara’s problems, and my problems, are not new problems. They have been going for more than three years. And within that period we have finished twice in fourth position in the Constructors’ Championship. This team is independent. It’s professionally managed. And it performs. So, whatever difficulties the shareholders may or may not have, it doesn’t impact the team…”

Except now it very much does.

That opening quote stems from Force India owner Vijay Mallya, given to the Reuters news agency during the 2018 Formula 1 British Grand Prix. Given the events of the last few weeks for his embattled team, there are now two ways to read it.

Firstly, it’s true. Well, at least the performance element of it is. Force India has been a rare case of backmarker-turned-model professional. The squad regularly punches way above its weight on track, regardless of the turmoil behind the scenes.

Secondly, though, Mallya’s quote could be interpreted as a refusal to acknowledge the inevitable. Almost a stubborn self-induced blindness to reality. An F1 team cannot operate without adequate finances, and there comes a time when the taps that are already reduced to a drip, get completely shut off and things cease to flow.

Driver Sergio Pérez, together with his manager Julian Jakobi, Mercedes-AMG and chief sponsor BWT, last week forced the issue by collectively calling in debts that placed the entire Force India team into administration. The various factions say it has been done to safeguard the future of the team and its 400 staff, primarily by easing control away from Mallya and his fellow stakeholders, forcing a sale and a change in ownership.

With Force India placed into administration, Mallya now has no say on the potential sale of his team, meaning it can continue to operate – and race – while a new owner is found as opposed to the squad’s assets being frozen and its cars placed under sheets for the remainder of the year – something nobody wants to see.

But this is the boiling point of a longer-running struggle for Force India, which – as Mallya says – began almost four years ago.

Mallya formed Force India in 2008, having bought the assets of the defunct Spyker team. Three years later, in 2011, Indian business conglomerate Sahara Group invested $100m into the team, ensuring it could expand and grow into the squad we see now. Going from the back of the grid to become a multiple podium finisher, beating many of the sport’s ‘heavyweights’ in the process,

That deal with Sahara caused the team to be retitled Sahara Force India F1 Team from 2012, with the firm taking up a 42.5 per cent ownership. Mallya too holds a 42.5 per cent share, with Dutch entrepreneur Michiel Mol holding the other 15 per cent.

Troubles began when Mallya’s Kingfisher Airlines had its operations suspended in October 2012, before being wound up in February 2013 amid crippling losses and debt. Then began Mallya’s personal legal issues.

Currently, a group of 17 Indian banks is seeking to collect approximately £1.15 billion in loans from Mallya, and several high-profile law agencies have begun investigations into potential money laundering and financial fraud. Mallya left India in 2016, and is domiciled in the UK, but has had his passport revoked and is unable to travel. Indian authorities are still seeking his extradition to face charges in his home country.

In May, Mallya resigned as Force India’s managing director, to be replaced by his son Siddarth. Mallya said the decision was made so he could focus on his legal difficulties. Vijay Mallya still holds the post of team principal.

Together with the financial trouble surrounding Vijay Mallya’s half of the boardroom, Sahara’s side has also suffered. The firm’s director, Subrata Roy, was imprisoned for financial irregularities in 2014, and Sahara has since sought to sell a swathe of assets to clear its debts – one of those assets being its stake in Force India, but no sale has been completed.

So, with 85 per cent of its shareholders embroiled in legal issues away from the team, Force India has continued to operate with a brave face, its success on track masking the gathering storm.

Sponsor BWT’s claim is interesting. Since it joined Pérez and Mercedes in petitioning for the team to be put into administration, it has come to light that the water treatment company agreed to back the team by providing it with loans alongside its branding, which it says have not been repaid. This sounds like the antithesis of a traditional sponsorship deal, surely made just to try keep the squad afloat in the short term.

Mallya has refuted BWT’s claims, telling Force India staff in a letter: “Surprisingly BWT jumped in and claimed that its sponsorship amounts were loans, which is ridiculous as our entire car is pink with BWT branding.”

During recent years there have been clues that the team was in need of a boost. It announced a plan to change its name to drop the India link in the hope of attracting global sponsors. In 2017 the name Force One was registered with Companies House, but never came to fruition after difficulties with it being too close to the ‘Formula One’ trademark and cyber squatters buying up website domain names featuring the name.

British company Rich Energy has also publicly stated that it has made several attempts to buy the team from Mallya and Sahara. Originally a figure of £150m was reportedly tabled, before that was reduced to £100m, but Rich Energy had been dismissed as a credible outright buyer. When news was released of Force India entering administration, the firm posted on social media that it had offered a £30m sponsorship deal instead, understood to be made in two £15m instalments. But this was viewed as insufficient to guarantee the team lengthy survival.

Mercedes motor sport boss Toto Wolff reckons the team won’t face the same fate as that of Manor, which was desperately seeking a buyer in the face of huge odds. Due to Force India’s competitive nature and strong links with engine supplier Mercedes, it faces a much better chance of remaining on the grid.

Wolff told Autosport: “First of all, credit must be given to Vijay for 10 years or so of funding the team. And having been not only a shareholder – the key shareholder of the team – but also having had the enthusiasm to support the team and fund it.

“Obviously things have turned more difficult for him and that has had an effect on the team. Now that the process has been kicked off by the administrator, there are many potential buyers with great interest, with deep pockets, [and] with an understanding of what kind of spending levels are needed in order to perform in F1. It’s something that is positive for the team, and for all its employees, I would say.”

With Mallya and Sahara now reduced to onlookers as the legal machine takes over, the future of the team is up in the air.