Another eventful session saw Sergio Perez top the time sheets as the Formula 1 field got its last bit of practice in before qualifying for the Miami GP.

The Mexican had set the lap amid a flurry of later faster times coming in, the sun going behind a cloud meaning the track instantly became more favourable towards fast laps. Leclerc was 0.2sec off Perez, Verstappen 0.3sec and Alonso fourth, 0.7sec away.

Things weren’t so smooth for the Spaniard’s Alpine team-mate though – Esteban Ocon crashed heavily at Turn 14 a quarter of an hour into the session, leading to a 15-minute stoppage, whilst a spin for Verstappen saw him almost in the barriers too.

Here’s how all three practice sessions panned out:

Several cars got out early to gain as much experience of the Miami International Autodrome as possible on a track which was at 54C at the start of practice.

Pit history repeated itself when Esteban Ocon was released into the path of a Mercedes — as he had been at Imola. This time he nearly collided with George Russell rather than Lewis Hamilton, despite an Alpine mechanic signalling to him to stop. 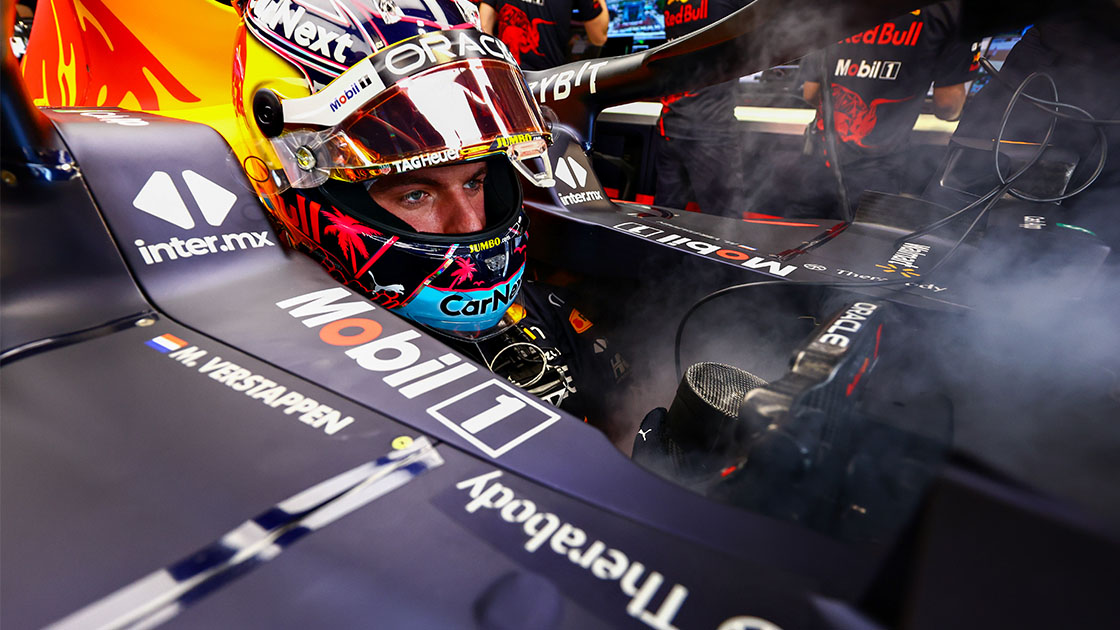 Yuki Tsunoda got the earliest fast lap in, setting a 1min 36.920sec on the medium tyre.

It wasn’t long till the recent order was re-established though, Charles Leclerc going quickest with a 1min 34.846sec before the Autodrome quickly became crowded; the Red Bulls next to hit the top of timesheet.

Verstappen breached the 1min 33s with a 1min 33.449sec, 1.2sec clear of his team-mate. And as the session wore on, the Maranello and Milton Keynes kids were repeatedly trading quickest times. Leclerc was next to head the timing screens, a 1min 34.330sec just pipping Verstappen. 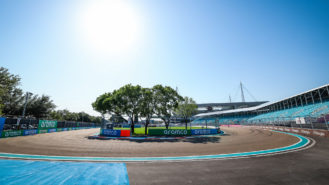 Down the not-so-sharp end of the field, neither Haas had set a time with over ten minutes gone, whilst perennial back-marker Nicholas Latifi was propping up the rest of the field, 3.4sec off Leclerc.

He would soon be even further off the pace, as Sainz, looking for redemption after a couple of torrid races, clocked a 1min 33.163sec to be fastest man on track.

Leclerc then went two-tenths faster on the mediums, whilst George Russell utilised the same compound to be just 0.001sec off the Ferrari.

Lewis Hamilton hauled himself up to fifth with a time six-tenths off the pace, as Perez was then fastest – the Mexican posting a 1min 32.759sec lap.

The narrow confines of some parts of the track meant there was various bits of squabbling, with Schumacher nearly rear-ending Daniel Ricciardo and then the German put into the run-off by Sainz at the second chicane. 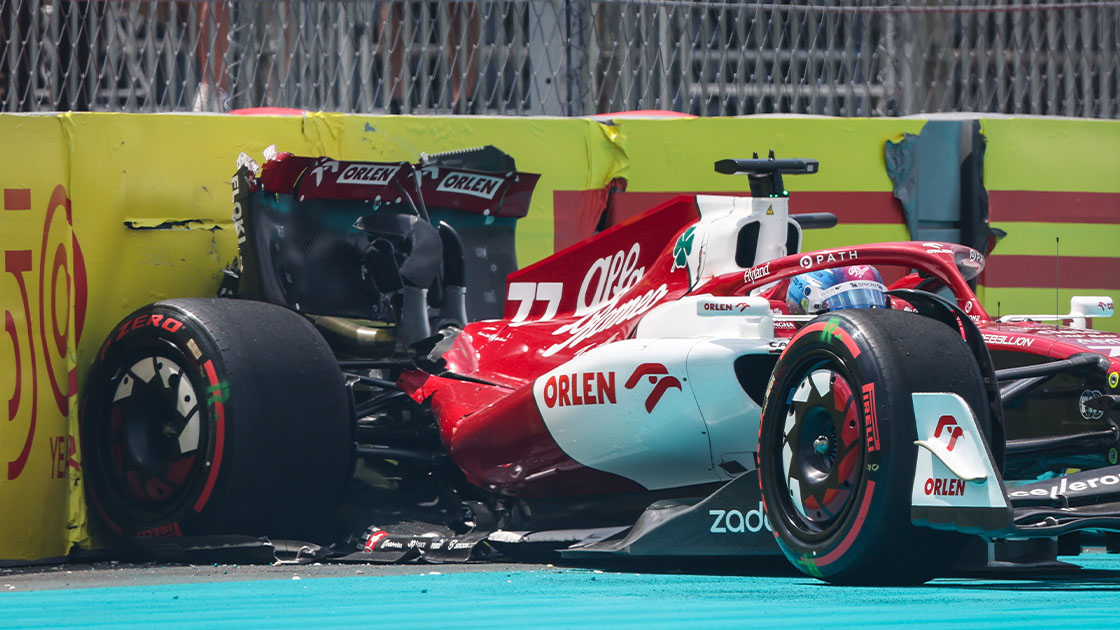 Bottas’s FP1 ends with a crunch

The tricky character of the track was emphasised when Lance Stroll was shown the black and white flag for crossing the pit lane exit, as Verstappen was then called in due to his car struggling with overheating.

Vettel was then shown the same warning as his Aston Martin team-mate for crossing the line at the pit entry.

Proceedings came to a sudden halt with 25 minutes left, after Bottas lost the rear of his Alfa Romeo in Turn 7, heading into the barriers backwards – the damage serious enough to end his session.

As the Finn removed his special Friday-only Miami edition helmet after just half an hour’s use, the other drivers headed back out to try and gain more evaluable track time.

Hamilton was the early mover on the restart, using the soft tyre to post a 1min 32.464sec and go second.

Sainz was also using softs, but his afternoon was soon deflated by a puncture on his front right, caused by a wild spin at Turn 4. Though the Ferrari was able to limp back to the pits, it appeared the team limited him to long runs for the rest of the day.

Alex Albon then surprised everyone by going second, half a second off Verstappen – the Dutchman was now the fastest with a 1min 31.350sec.

Both Mercedes were looking more and more promising throughout the session – Russell showed this again by lapping just a tenth slower than Verstappen.

Leclerc had spent several laps winding up to a quick lap – he finally delivered it with three minutes left of the session. He very nearly broke into the 1min 30s with a 1min 31.098sec, leaving the Monégasque fastest. 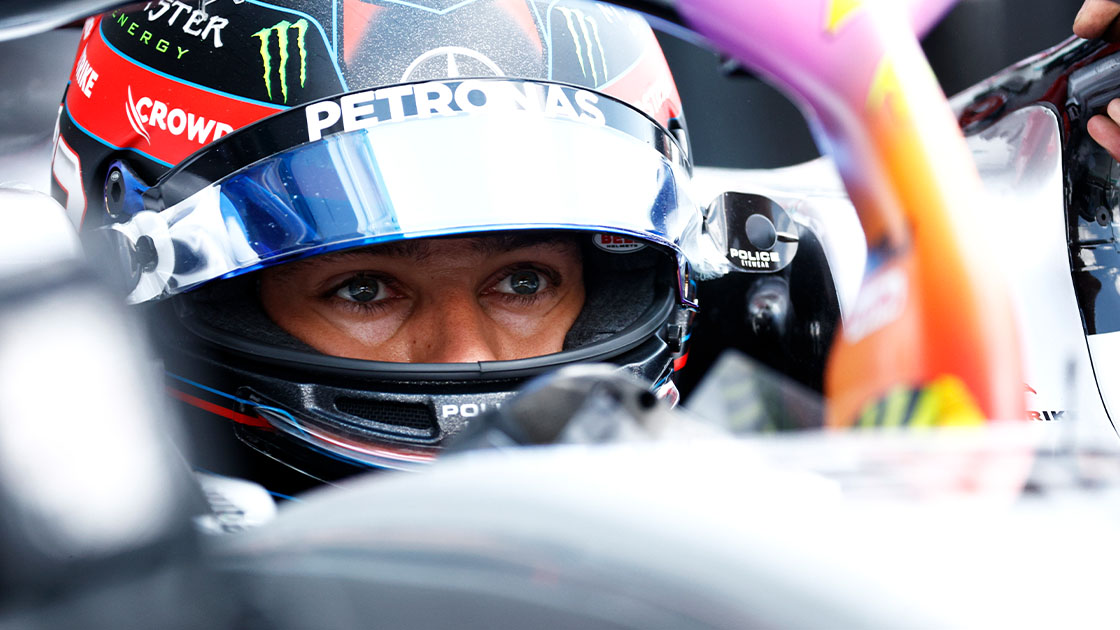 He remained quickest as the chequered flag fell, with the impressive Russell just behind.

The two Red Bulls followed them in third and fourth, with Gasly and Sainz fifth and sixth.

As the cars headed out once more on medium tyres, Bottas’s car remained in bits in the pits, as did Max Verstappen’s: the team making a precautionary gearbox change after a bump with a barrier in the previous session.

Carlos Sainz led the timesheet following the first ten minutes, with a 1min 31.463sec lap. Mick Schumacher wasn’t setting any times after his sidepod became detached and the Haas driver had to pit after just three laps of the session. 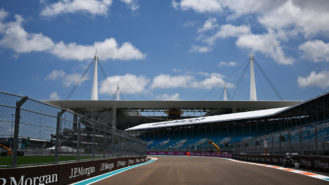 Now or never for Merc: 2022 Miami Grand Prix what to watch for

Sergio Perez spun in the long Turn 7 but avoided the walls and continued on, setting the second-fastest time with 15min gone, just 0.065sec behind Sainz who had continued to improve and was the first to dip into the  1min 30s.

But it was a now-familiar story for the Spaniard soon afterwards, as he lost the car at the fast Turn 13, heading towards the 14-15 chicane, spun and skidded into the barriers, his left-front suspension destroyed and his session over.

After crashing out in Australia and Imola, the Ferrari driver had been looking for a smoother weekend in Miami but was still top of the table when he crashed out and triggered a red flag.

It took 12 minutes to recover the Ferrari and reset the barriers, leaving 30min left in the session, which began with a series of soft-tyred runs. 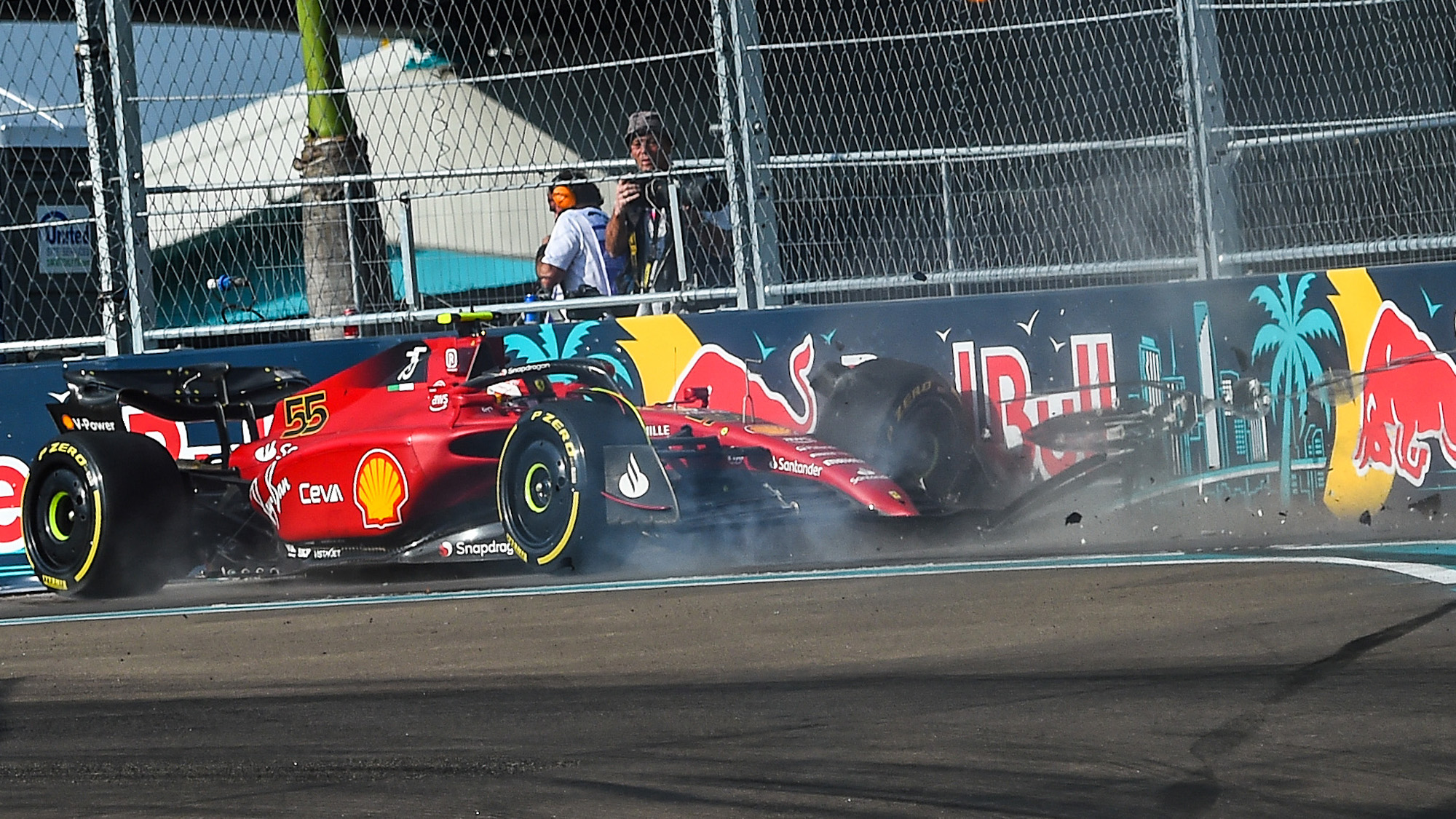 The pause allowed all of Red Bull’s mechanics to focus on Verstappen’s gearbox change. The reigning champion headed out for the first time in the session only to complain of being unable to steer with a hydraulic issue. The car was visibly difficult to manoeuvre and Lance Stroll only just avoided a collision with the lumbering Red Bull; Verstappen heading back to the pits so slowly that his rear brakes overheated, with flames licking the rear wing. He would not re-emerge.

At the same time, Mercedes drivers once again found themselves in unusual territory for 2022, despite their continued violent porpoising. George Russell became the first to go below 1min 30sec with a 1min 29.938sec lap on soft tyres, and Lewis Hamilton was 0.24sec behind.

That time was still fastest when Nicholas Latifi pulled over at the side of the track with 12min to go, complaining of a strange balance.

The Williams was quickly pushed to safety and the session restarted with 9min remaining. Most chose medium tyres and heavier fuel levels. Russell complained of bouncing that was even worse than on soft tyres. 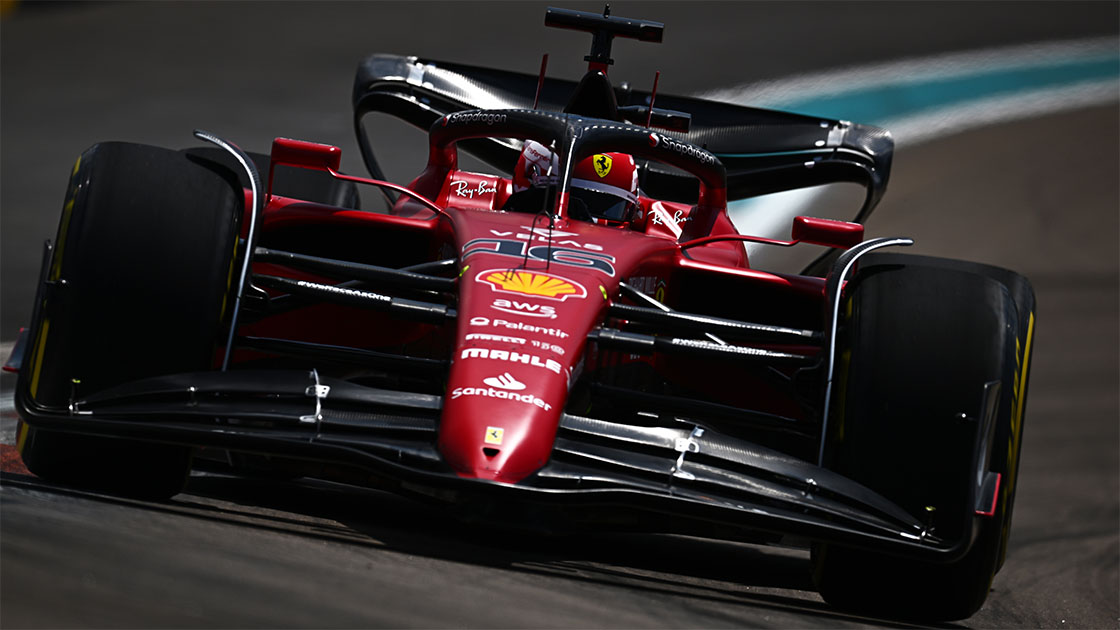 Drivers continued to struggle when they ran offline onto the dirtier sections of track. Perez missed his braking point and heading into the run-off while trying to pass Sebastian Vettel and Kevin Magnussen was caught out when running wide in Turn 7. Both cars emerged unscathed.

Russell remained at the top of the timesheet in a Mercedes resurgence, with 0.2sec covering him, second-placed Leclerc and Sergio Perez who was third

Drivers were again very keen to get as much track time as possible, with both Red Bulls heading out immediately.

Verstappen set a 1min 34.037sec, apparently representative of the best race pace set on Friday, but this was immediately bested by Charles Leclerc as he clocked a 1min 32.250sec.

The Dutchman soon closed up to two tenths off, but for Lewis Hamilton things weren’t going so well – the Mercedes driver had to abort his first flying lap after getting a huge amount of oversteer at the start. 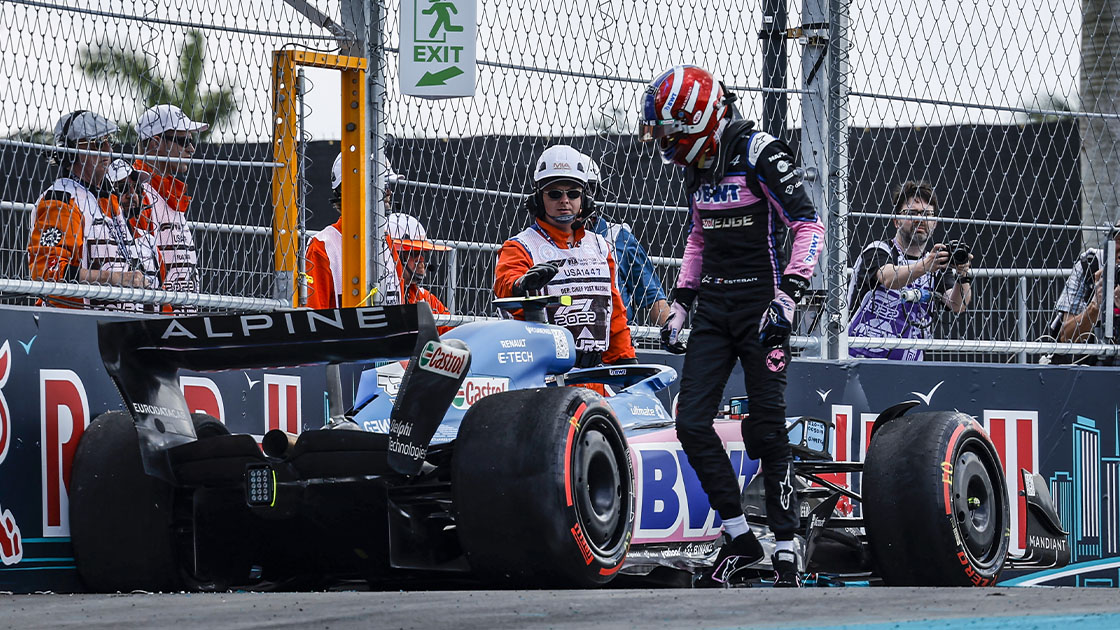 Pierre Gasly continued to look impressive, the AlphaTauri driver going third on 1min 33.760sec, but more times were flooding in: Mick Schumacher shuffled him down before then spinning briefly later, and the Mercs started to show some pace too: 1min32.35sec meant George Russell was now third fastest, with Hamilton half a second off.

Verstappen got down to business, fastest with a 1min 31.355sec, but proceedings soon came to an end: the red flag was thrown out when Ocon had a heavy crash identical to Sainz’s shunt the previous day.

After a big clean-up things got back underway on 32 minutes, with most cars on track and space limited.

Some drivers were focusing on longer runs, but Bottas was on the move, the Alfa Romeo registering a 1min 31.885sec to put the Finn third.

Both Haas were looking solid, with Kevin Magnussen moving up the order sixth with a 1min 31.178sec.

Leclerc then put on a set of new set of softs looking for some faster runs, but others were struggling for grip. Norris almost hit the barrier after a big moment of oversteer, and Russell had to abort a lap as he struggled to put the power down early out of the opening turn.

The Ferrari’s fresh tyres paid dividends, and despite a moment running wide a 1min 30.981sec meant Leclerc was now fastest.

Russell again had oversteer, radioing in to tell the team: “Tyres are nowhere.” Gasly was having no such issues though: the Frenchman was now fourth fastest with a 1min 31.901sec.

Hamilton improved also as he managed to set a 1min 31.890sec, but he was no match for the Red Bulls who put on softs late on.

Both Milton Keynes boys topped the table – Verstappen with a 1min 30.649sec and Perez 0.05sec away.

More fast laps were flooding in soon after: Albon did a late flyer similar to FP1 meaning the Williams driver was 1.1sec off the ultimate pace, before Ricciardo then went slightly faster, a 1min 31.756sec putting him fourth briefly before more laps shuffled them down the order.

This was due to the sun going in and the track cooling – Perez emphasised this by going quickest with a 1min 30.304sec, whilst Vettel went fourth, 0.745sec off the Mexican.

Verstappen then scared himself by bouncing over the uphill chicane and losing the car, managing to get it stopped a couple of feet away from the barrier.

A bit of reverse gear and the Red Bull was on its way, the car undamaged.

As proceedings came to an end, it was Perez who was top, with Leclerc just under two tenths off, Verstappen 0.345sec off in third and Alonso 0.75sec off the Mexican.