McLaren has been here before.

The day after the death of its founder in 1970 it bravely decided to continue – because Bruce would have wanted them to. 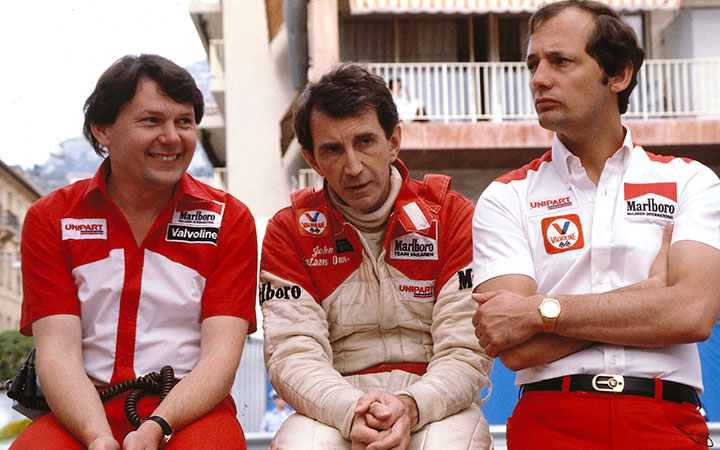 It won its first two Formula 1 World Championships in 1974 and added a third two years later.

By the decade’s end, however, it was in crisis once more.

When along came an ambitious, 32-year-old junior formulae team owner and a bright young designer returning to the fold.

With their eye for detail and the bigger picture, plus Marlboro’s backing and promotion, Ron Dennis and John Barnard not only transformed the team but did so with a car and practices that provided templates for Formula 1’s future. 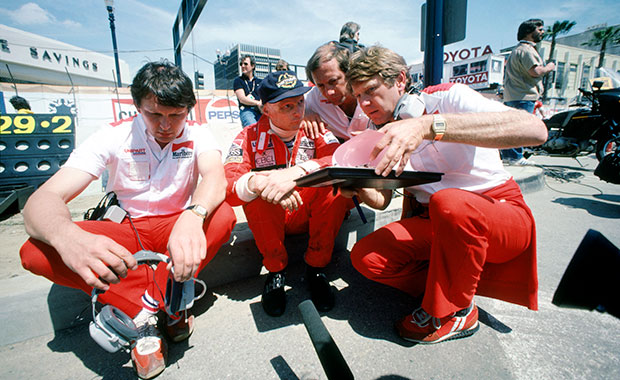 With the surprise signing of a no-nonsense star driver – for Alonso read Lauda – and an exclusive engine deal – for Honda read TAG-Porsche – they embarked on an extended run of success.

“I joined Ron’s Project Four at the end of 1979 and started designing an F1 car, the carbon monocoque [the eventual MP4/1],” says Barnard. “He couldn’t get the budget to finish it, but John Hogan of Marlboro was very interested; he was also very disappointed with the way that Team McLaren was going.

“It was ‘Hogie’ who stitched the teams together. The directors and shareholders were: Ron, myself – though I only had nine per cent at that stage – and Creighton Brown; plus Teddy Mayer and Tyler Alexander from Team McLaren. That was the [original] make-up of McLaren International.”

John Watson, who had switched to McLaren from Brabham in 1979, noticed an immediate impact: “John [Barnard] attended the last two GPs of 1980. Teddy, who could be a very effective race engineer, was running Alain Prost in M30 – Team McLaren’s last-gasp bid to stop Ron and John coming in – and so I got John’s undivided attention on M29.

“I thought he was nuts when he raised its front ride height in Canada. But I went out… an unbelievable improvement. He‘d activated the underbody venturi and I had a very strong race. 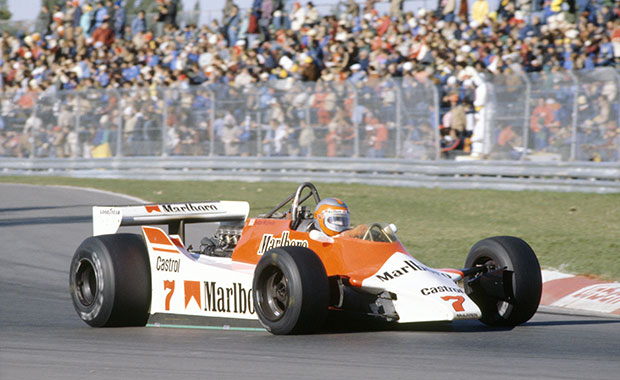 “Ron was the focal point: his drive, his ambition. He said there’s no such thing as bad luck, just bad driving, bad design, bad manufacture. He’d chosen well in John and, once the deal had been mapped out, I could never see Teddy and Tyler regaining control.

“[But] John’s was the only head doing any butting. In the 1960s and ’70s, the guys working on the cars influenced a lot of their design. That was Team McLaren’s culture. John stopped its habits of telling a designer what to do, of making little brackets and pop-riveting them everywhere.

“With him, it was my way or the highway. His car, his project, he didn’t want anybody muddying the waters.”

Barnard
“Everything that got made and done, how the car was put together, came from the drawing office – and I ran the drawing office. That put a lot of Team McLaren people’s backs up. But they’d fallen off the technical bandwagon.

“Ron was bringing the money in – he did deals that Teddy couldn’t – and I brought the technical. We upped their game.”

Watson
“Everything about the design, manufacture and construction of MP4/1 was of magnitude that I’d never seen before. It was a piece of Fabergé jewellery. Its accuracy, its repeatability – it had none of the inconsistencies of the old method of construction.

“John virtually had carte blanche in engineering terms. I suspect that his remit from Ron was: I want to win every grand prix. They had to go to America to get the technology and his uprights, and the like, were thus lighter, stronger and shed-loads more expensive.” 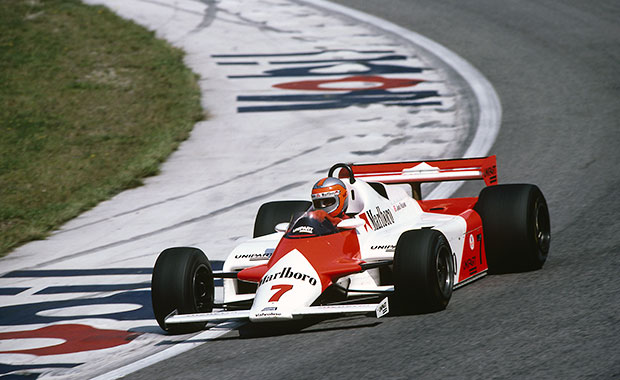 Barnard
“Wattie won the [1981] British GP in the first year of the new company. So Marlboro was happy, and Ron gave us the ability to do things like the TAG-Porsche turbo. Teddy kept showing me drawings of Renault’s engine, fundamentally a road car block. He said it was good enough for Lotus…

“Our thinking was that we could do better.

“Teddy had always wanted to be a designer and he got under my skin. When I told Ron that I wanted to leave, he said, ‘I’m with you.’ He went away and did a deal at the end of 1982 whereby we bought out Teddy and Tyler.

“We now owned McLaren International: I had 43 per cent, so did Ron, and Creighton had the rest.”

Followed by four more of each, in consecutive seasons with Honda power, as from 1988.

By which time Barnard had left to work with Ferrari, albeit strictly on his own terms.

“By the end of 1984 – and, if you ask me, I’m not entirely sure why – I wanted to sell my shares,” he says. “Ron and I had put our houses on the line to get the bank loan to do the deal. That was a big commitment. I was married and had two children and didn’t like taking financial chances. So Ron did a deal on my shares with Mansour Ojjeh of TAG.” 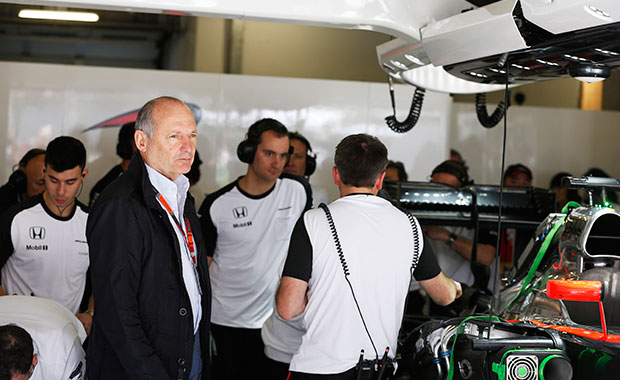 Barnard
“Ron doesn’t like the idea of a technical chief. He doesn’t want one. I think that’s a mistake. He’s got these groups that have to talk together and agree.

“There’s a parallel. Teddy was bossing Team McLaren to a large degree, although [chief designer] Gordon Coppuck was there. He would say, ‘I’ve seen this on such-and-such car and I think we should try it’, and Gordon would draw one and get it made. That’s the way it was at the death throes of Team McLaren.

Watson
“McLaren’s business management model isn’t a pyramid, which is what I’ve always believed an F1 team should be, because that’s how I’ve always worked with them. Instead it’s a group of individual managers all at the same level, with no one person having autonomy.

“There are still lots of exceptional people at McLaren. If there’s a new Barnard or Adrian Newey there – and this is where I disagree with the company – you need to let them have their day in the sun.

“Ron demands exceptional loyalty from his employees, but he’s very loyal, too. It’s the brand that’s all-important to him. I happen to think that he could be a little more chilled about it because all that matters is winning.

“He’s not in danger of becoming a Teddy. He’s like any captain of industry: chairman of the board of God knows how many companies.” 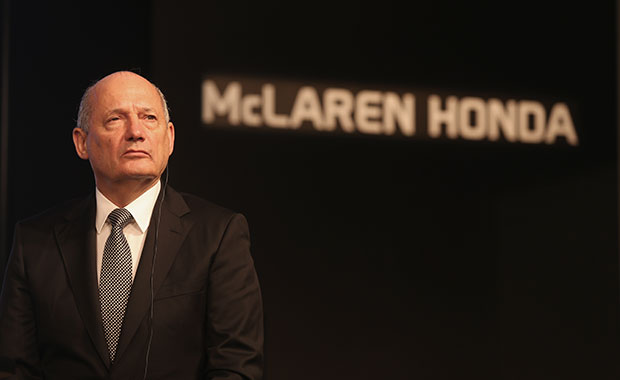 Barnard
“We were approached on a couple of occasions to do road cars and I refused. We were a much smaller outfit back then, true, but I thought it would reduce the focus.

“I think that’s happened to Ron. He’s going after the Porsche market and I cannot believe that he doesn’t spend a fair proportion of his mind on that [road car] project.

Watson
“At the beginning of 2015, journalists and ex-drivers reckoned that McLaren would be on the podium at some point and probably end the year as the fourth-best team…

“You would have to put 90 per cent of the blame at Honda’s door.”

Barnard
“[But] what were Ron’s options? He wasn’t going to get the same as a works Mercedes. He won’t go to Ferrari on principle. Renault – well, who knows? So he went to Honda – I would have agreed with him had I been there – because they are renowned for making good engines.

“I get the impression that they came in with too much expectation. They’d had everything going for them in 1988: in the middle of a rule change they were the only ones to produce a proper turbo; they had the world’s best drivers; and the McLaren was a decent car. 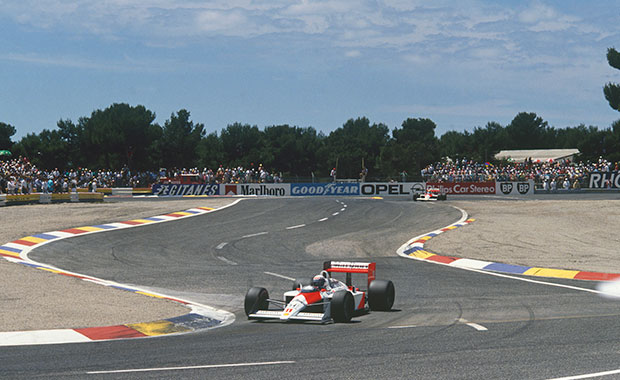 “They forgot that that was a one-off year and completely underestimated what’s required today.

“It’s very easy to sniff the glue of success.

“I suspect that Honda will get there. The problem is when. [Meanwhile] McLaren are losing sponsors. And they’re not five-minute sponsors, these are seriously long-term people.”

Watson
“I was with McLaren when the Boss deal was done. And I don’t understand TAG going to Red Bull. I don’t know how that could ever have happened.”

Barnard
“Ron likes having one big name so that he can have a nice, clean-looking car, but that’s more difficult to do because of the size of today’s budgets. That’s a fundamental problem. You have to get the money before you can do the job.

“He can’t afford another year like this. McLaren has already lost a lot of its reputation. There are whispers about how good its car is. Would it be in front of Williams if it had a Mercedes engine? Sometimes yes, sometimes no.”

Watson
“How do you judge it? It didn’t stand out in the wet. That’s how you usually tell. With a better engine it might have been in the mix with Force India, Williams and Lotus, but you wouldn’t have expected it to beat Ferrari. 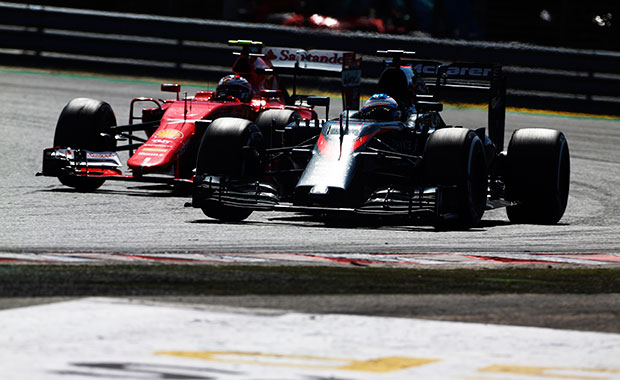 “That pains Ron. He’s going through the worst toothache you can imagine. He didn’t see the down of 1979, he profited from it. No, no, no, this is bad. This is his biggest challenge, without question.”

Barnard
“He needs to get into Honda and say, ‘Look, what are you doing? What’s your next move?’ He might be saying this but is it having any effect?”

Watson
“I don’t believe anything that has occurred this year will directly influence any Honda improvement. They’ll have a three- or five-year programme and you won’t make them change. Ron hasn’t got that sort of leverage.”

Barnard
“He’s fighting on all fronts and hasn’t got too many fighting for him.”

Watson
“He’s a consummate self-promoter and salesman and he persuaded the board to give him the mandate to retake control. That was a good thing in many senses because he understands an awful lot. Maybe he doesn’t help himself sometimes, but he’s not a fool.

“I don’t think his position is threatened. I don’t think people are conspiring against him. It’s just tough out there. There are lots of reasons why teams go through bad patches. It’s cyclical. Look at Red Bull.

“Gradually, new, younger people will come into McLaren and bring what Ron and John brought.”

Barnard
“[But] we turned round a river cruiser. Now they are trying to turn round an oil tanker.”