You could argue that the best racing at the Circuit de Catalunya came just five laps into its inaugural Spanish Grand Prix in November 1991.

It was Mansell vs Senna, Williams vs McLaren and Marlboro vs Camel: 1990s Formula 1 racing summed up in a single image that photographers had seven seconds to capture.

For a track that has since earned a reputation for more processional racing, it was an explosive debut, just as the season was looking settled.

A Williams pitstop glitch at Estoril a week earlier left Mansell stranded in the pitlane on three wheels, and then disqualified after mechanics fitted the missing tyre in the fast lane.

Mansell was 24 points adrift of Senna in the championship, with only 30 points available from the remaining three races.

The first days of the Barcelona weekend didn’t bring much more hope for Mansell who injured his ankle in a football match on the Friday, and had a heated row with Senna in the drivers’ briefing.

He qualified on the front row of the grid, behind Gerhard Berger’s McLaren and ahead of a seemingly cautious Senna, who just needed a steady result to all-but confirm him as champion.

Mansell lost ground during the wet start, finding himself overtaken by Senna, in second place and Michael Schumacher in third, but there was plenty of speed in his Williams FW14. 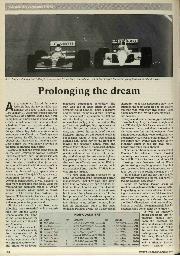 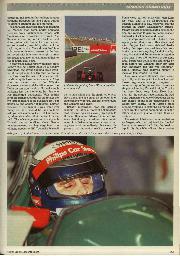 Prolonging the dream As a venue we feared the worst, worried that, literally, it might have nothing; as a race, it had it all. The 1991 Spanish GP was one…

“It didn’t take him long to work back on to Senna’s tail, as Berger built up a healthy advantage, and it was a racing brain working at its optimum,” wrote David Tremayne.

After a brief attempt to overtake on Lap Four, Mansell entered the main straight on the following lap in the ideal position.

“A lap later he ducked out of the MP4/6’s slipstream earlier, and the Williams and the McLaren ran side by side,” continued Tremayne. “Normally such incidents last but moments, but this one was prolonged deliciously.

“With sparks scraping from their undercar skidplates the two fastest drivers in the business sat it out alongside one another at 195mph, neither prepared to give an inch.

“It was Grand Prix racing just as it should be, and to their lasting credit neither of them let their morning altercation affect their conduct on the track. The advantage was fractionally with Mansell, but as he dived ahead Senna counter-attacked as they negotiated the left-hand section of Elf. Tactically Mansell ran a little wider than he might otherwise have done, and as Senna, on the outer line, had to move wider still and lost momentum, the Williams was away.”

Not for long, though, as Schumacher – in his fourth Grand Prix – began harrying the pair, and it was soon time to stop for slicks.

With the shadow of the previous race still hanging over Williams, Mansell’s stop was slow, and Senna gained track position once more.

But the Brazilian’s choice of harder tyres proved a mistake and he spun. “It was both uncharacteristic and dramatic, for as the McLaren looped towards the pit wall he had the brakes hard on, and even before the full momentum had been exhausted he had hooked reverse and shot back across the track, on to the outfield,” wrote Tremayne.

“In doing so he narrowly missed Mansell, who scraped through on the outside, and Schumacher, who thus had a clear inner line for which to aim. It was cool-headed car control par excellence.”

Tremayne described Senna as lucky; the manoeuvre could easily have ended in the same way as Romain Grosjean’s recovery spin in 2018 at the same track, but any hope of victory was gone.

With more light drizzle, Mansell took the lead from a slithering Berger and when the Austrian retired, Mansell faced little competition, winning by 11 seconds – apparently against the odds, if you believe his post-race comments.

“Afterwards we heard the familiar tune, as he limped in on his football-injured ankle and spoke hoarsely of his developing laryngitis,” wrote Tremayne. “No Mansell finish ever seems quite complete these days without some medical ailment.”

Behind Mansell was a disgruntled Alain Prost who was convinced that he could have won, had he started on slicks, but the team had refused his request five minutes before the race.

It would be Prost’s penultimate race for the Scuderia, which replaced the Frenchman with Gianni Morbidelli for the season-ending Australian Grand Prix.

By then, Senna had been confirmed as world champion. But with Williams’ FW14B waiting in the wings for the 1992 season, Mansell’s time was about to come.