Blimey, that was cagey. Monte Carlo is restrictive at the freest of times, but with the most talented Formula 1 grid since the 1960s resigned to playing the long game in this most unpredictable of seasons, the top six, tightly packed though they were, had clearly decided to stick rather than risk a twist.

Mark Webber promptly asserted that wins – as and when you can grab ’em – are what will secure you the title. Lewis Hamilton, who has so capably amended his style and mindset – it’s what the great drivers sometimes (have to) do – since team-mate Jenson Button’s drubbing of him in Australia, remains consistent about the benefits of consistency. 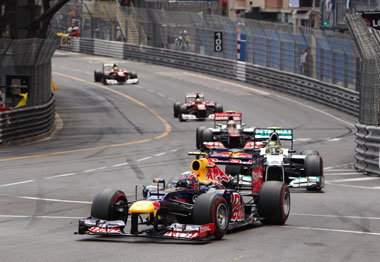 A pattern one way or t’other must surely emerge – though it never did in 1982 – as teams get to grips with their Pirellis. Although the latter has copped plenty of flak for its wares’ wear, Monaco was the first time this season that the Italian tyre company has obviously miscalculated: its tyres were too good in the duration sense. Foisting a two-stop strategy on teams otherwise fiercely protective of track position would have mixed it up nicely.

The teams, meanwhile, twitchy and suspicious, misread this opportunity. Pleased to have apparently picked off Hamilton by staying out a lap longer on the super-soft Options, Ferrari called Fernando Alonso in for his only stop. It was sharp, snappy and got the job done. Yet driver and team later admitted that they should have stayed out longer still and picked off Nico Rosberg too – and perhaps even Webber.

The Spanish two-time world champion is most people’s current pick of this juicy bunch. I am beginning to wonder, however, if his Ferrari is/was as bad as it is/has been made out to be. Indeed, precisely which is the best car is an imprecise science at the moment. F1’s 24-7 crunching of numbers is providing the occasional crumb of comfort but no more. This scenario would pall were it always so – but it won’t be, and so I can see no reason not to enjoy it. Think of it as Schadenfreude minus the crowing glee.

Clearly not everyone agrees: a Monaco GP that had much to (sit back) and admire, if not have you jumping from your seat, was viewed in some living rooms as a snore-y bore-fest. Calls for this gloriously anachronistic race to be dropped from the calendar are still in the minority but have, to my ears, never been louder.

Well, there was a time when it wasn’t the date around which the calendar pivots. From 1951-’54, there was no Monaco GP as we know it. The ersatz F2s of 1952-’53, which would have suited the track, did not suit the race’s high-rolling organisers and so never set a wheel in the place.

There was, however, a Monaco GP during this period: a race for sports cars in 1952. Stirling Moss drove a Jaguar C-type and led; Robert Manzon’s nimble Gordini tracked down Moss and passed him; and Vittorio Marzotto’s Ferrari won after the nose-to-tail leaders spun out on oil spilled by Reg Parnell’s Aston Martin.

This experiment, however, is ‘best’ remembered for the death of Luigi Fagioli. For a still unfathomable reason he lost control of his Lancia Aurelia exiting the tunnel during practice for the Prix de Monte Carlo, a support race for 2-litre sports cars. The Italian veteran was thrown from the saloon and knocked unconscious. He awoke four days later and seemed to be on the mend, a horribly mangled knee notwithstanding, when he suddenly deteriorated and died three weeks after the crash. He had just turned 54. 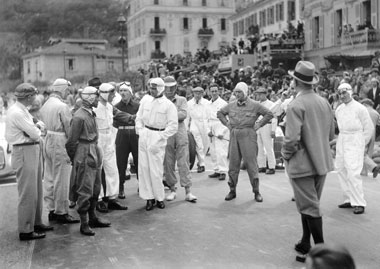 The drivers’ briefing at Monaco in 1935

Fond of Webber-like stubble and casual attire – i.e. jerkin, beret, no tie – he stuck out like a sore thumb in the double-breasted, fedora-ed paddocks of the 1930s. A man of contradictions – wealthy and well connected, he studied accountancy, boxed and wrestled – his furious temper sat uncomfortably with a love of winning. Consistency was not his bag – at least not in the pre-WWII part of his career.

Ordered to hold station behind Mercedes-Benz team-mate Manfred von Brauchitsch on the race debut of the ‘Silver Arrows’ at the 1934 Eifelrennen, he parked up on the last lap and stalked off grumbling about a ‘misfire’ that only he had heard. At the 1935 Belgian GP, faced with a similar scenario – this time Rudi Caracciola was in his cross hairs – he leapt from a healthy car during a heated pit stop debate and von Brauchitsch, already retired from the race, had to be found and retrieved to bring it home in second place.

Yet in between times he could be a picture of measured calm. He won the 1934 Coppa Acerbo and Italian and Spanish GPs. The following year he won the Avusrennen and Monaco GP – more wildly contrasting races you could never hope to find – plus the Penya Rhin GP in Barcelona’s Montjuich Park. He will forever be the first man to lead a Monaco GP from start to finish: peerless, Webber-like precision.

But the bad behaviour eventually outweighed the good results. As Caracciola increased his strength and competitiveness – he had badly bust a hip during the newfangled timed practice at Monaco in 1933 – and Hermann Lang, Fagioli’s mechanic, was handed, and resoundingly took, his chance at the wheel, the Italian was always going to be shown the door by a team that gave methodical organisation and strategy to the sport. He would end his racing decade early, embittered – and crippled by rheumatism: yesterday’s man by the end of 1937. 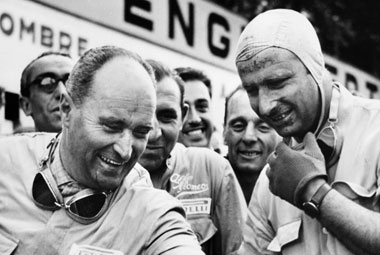 Yet he was to become the third, and slowest – but most consistent – of Alfa Romeo’s famous ‘Three Fs’ of 1950. Healthy once more, he appeared content to sweep up a succession of second and third places in the turbulent wake of the Juan Fangio/‘Nino’ Farina battle. His final Alfa outing, a 1951 one-off in the French GP at Reims, brought him his singular World Championship win: a share in a victory orchestrated by Fangio (above with Fagioli). At 53 years 22 days, he remains the oldest winner. Only one-hit wonder Dorino Serafini – a shared second place with Ferrari’s Alberto Ascari at the 1950 Italian GP – has a better start/podium-finish hit rate than Fagioli’s 85.7 per cent: that’s six from seven.

This transformation from rolling boil to bubbling simmer was 14 years in the making. Webber and Hamilton – plus the seven other drivers with a realistic chance – have just 14 more rounds to prove the worth of their decision: old or new ‘Fagioli’ for the title?

I reckon that it will require a bit of both – and that Alonso has been working on this basis from the off.