Max Verstappen dominated the 2021 Austrian Grand Prix to take a fifth win of the season.

Valtteri Bottas was second after Lewis Hamilton dropped back due to damage to the left rear of his car, and Lando Norris put in a mightily impressive drive to finish third, after picking up an early 5sec penalty for easing Sergio Perez off the road as they fought on track.

It was a strong start for Verstappen on lap one with Lando Norris tracking him closely.

Lewis Hamilton got the jump on team-mate Valtteri Bottas before attempting to go round the outside Sergio Perez at Turn 4.

A safety car was called out after Esteban Ocon was sandwiched between the Haas of Mick Schumavcher and the Alfa of Antonio Giovinazzi. The Italian’s left rear hit the right front of Ocon, putting the Frenchman out with suspension damage. 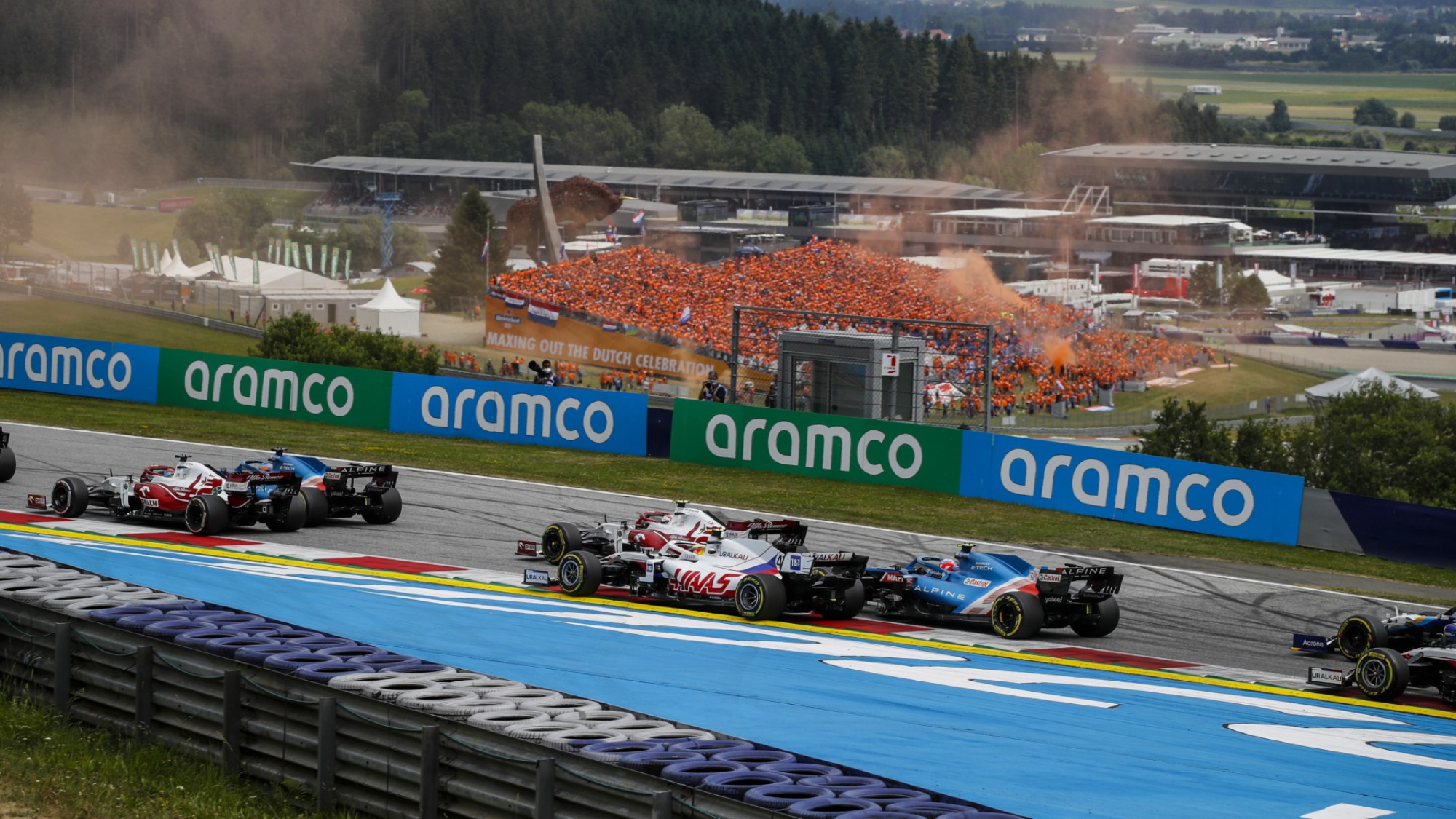 Ocon gets trapped in a suspension-damaging sandwich

On the restart on lap four, Verstappen massively backed up the pack before setting off, giving Perez a run on Norris.

The battle went on up to Turn Four, until Perez attempted another outside pass. Norris gave the Mexican little room, with the Red Bull going into the gravel and falling to 10th.

Hamilton managed to fend off Bottas before he set his sights on the McLaren.

Verstappen was putting in laps at a blistering pace, clocking in a fastest lap of 1min 09.282sec on lap eight, with the gap to Norris now over 3sec.

“Yeah OK, I don’t care” was the McLaren man’s answer when he was informed of his main potential rival Gasly’s lap times, as he still had two Mercedes buffering himself from the AlphaTauri.

Hamilton got close to Norris at Turn Four on lap 10, but Norris perfectly placed his car to fend off the reigning champion.

Bottas was falling away meanwhile, his gap to Hamilton and Norris over 3sec.

Yuki Tsunoda pitted on lap 12, looking to move the AlphaTauri to a two-stop strategy as he put on the hard tyre. His team-mate Gasly came in the next lap.

Charles Leclerc tracked Perez into Turn Four, got before Perez ran deep trying to defend down the inside. The Monegasque then switched back, taking seventh off the Red Bull.

Lance Stroll ditched his soft tyres on lap 15, whilst Verstappen was simply going faster and faster on the mediums, posting a 1min 9.070sec on the same tour. 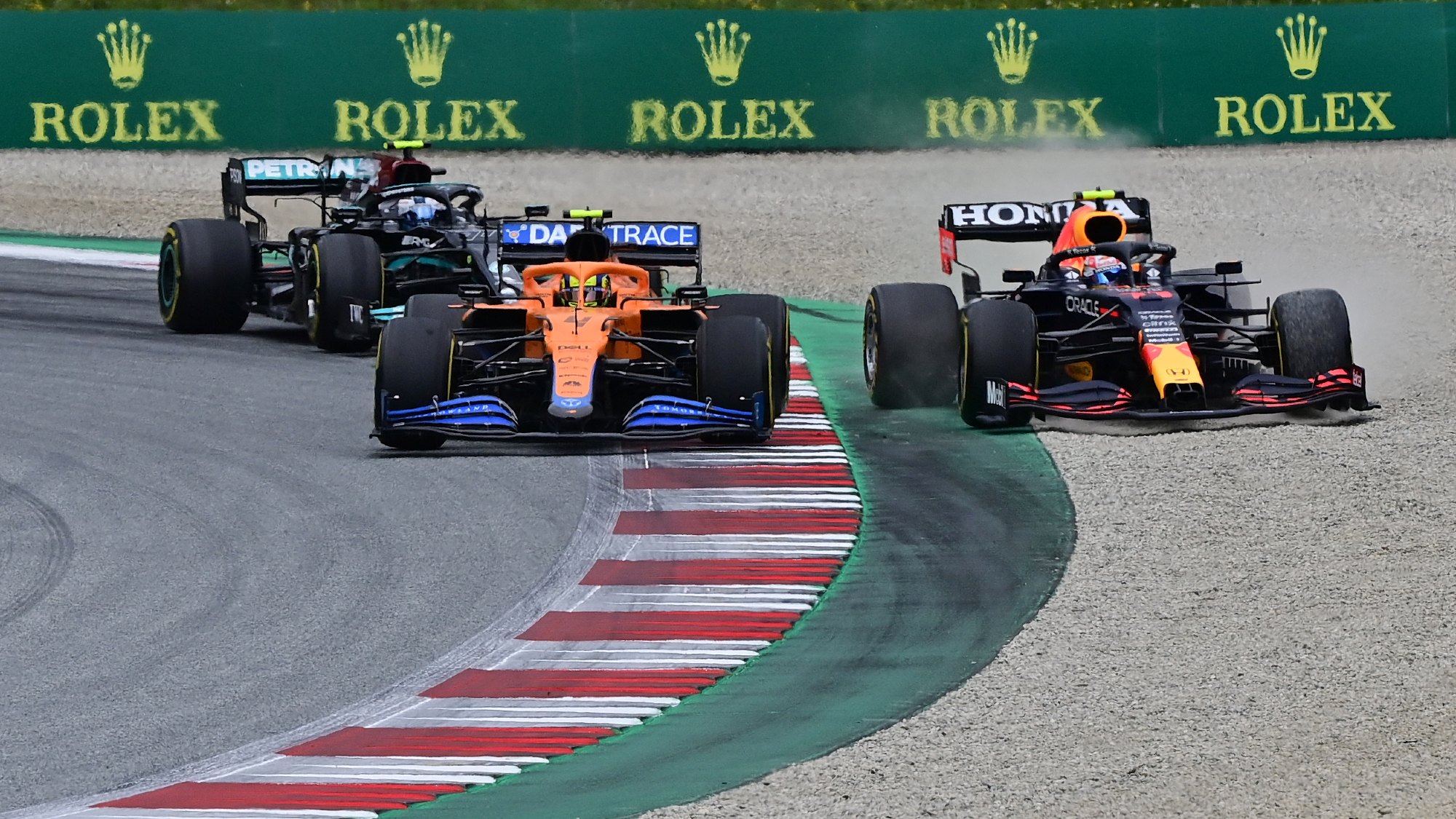 Ricciardo used his DRS to sidle up to Sebastian Vettel on lap 18, going round the outside of the Aston Martin as they headed into the fourth corner.

Vettel responded by pitting as he moved onto the hard tyre.

Norris was handed a 5sec penalty for the Perez incident on lap 20, his misery compounded as Hamilton then got past him at Turn Four.

Tsunoda was handed a 5sec time penalty for crossing the line at the pit entry on lap 21.

Verstappen was in a world of his own up front, his lead over 10sec by lap 25.

On lap 29 Perez was still behind Leclerc, looking for a way past but with no real chance of an overtake.

Ricciardo came into the pits on lap 30, emerging in 12th behind Gasly.

Norris and Bottas both came into the pits on the same lap, Norris having to be held for 5sec to serve his penalty meaning the Finn came out of the pits ahead of him.

As Verstappen came upon a train of cars to lap, Mercedes decided to react by bring in Hamilton to do as much damage as they could to the Red Bull on new tyres on lap 31.

Verstappen pitted at the end of the next circuit, his seamless pitstop meaning he maintained a 13sec interval over the Brit.

Tsunoda was rising up through the field, passing Latifi for 11th on lap 33.

Leclcerc pitted on lap 35, but Perez’s undercut was effective, the Ferrari falling behind the Red Bull.

Hamilton was told on lap 37 that he may have damaged the left rear floor of his Mercedes running over the kerbs, to which he replied “Yeah, the rear doesn’t feel good at all”.

Three laps later, George Russell managed to nose his Williams up the inside of Lance Stroll at Turn 3 for 13th in an impressive drive from the British driver.

Ricciardo was exploring opportunities to pass Gasly on lap 39, with Perez and Leclerc close behind in a 200mph gaggle.

Leclerc tried to go round the outside of Perez on the next lap, the Mexican doing to the Ferrari what Norris had done to him yet with even more force, shoving him into the gravel on the exit.

Perez was handed a 5sec penalty for his mirror image incident, as the Ferrari team told Leclerc his car was undamaged. 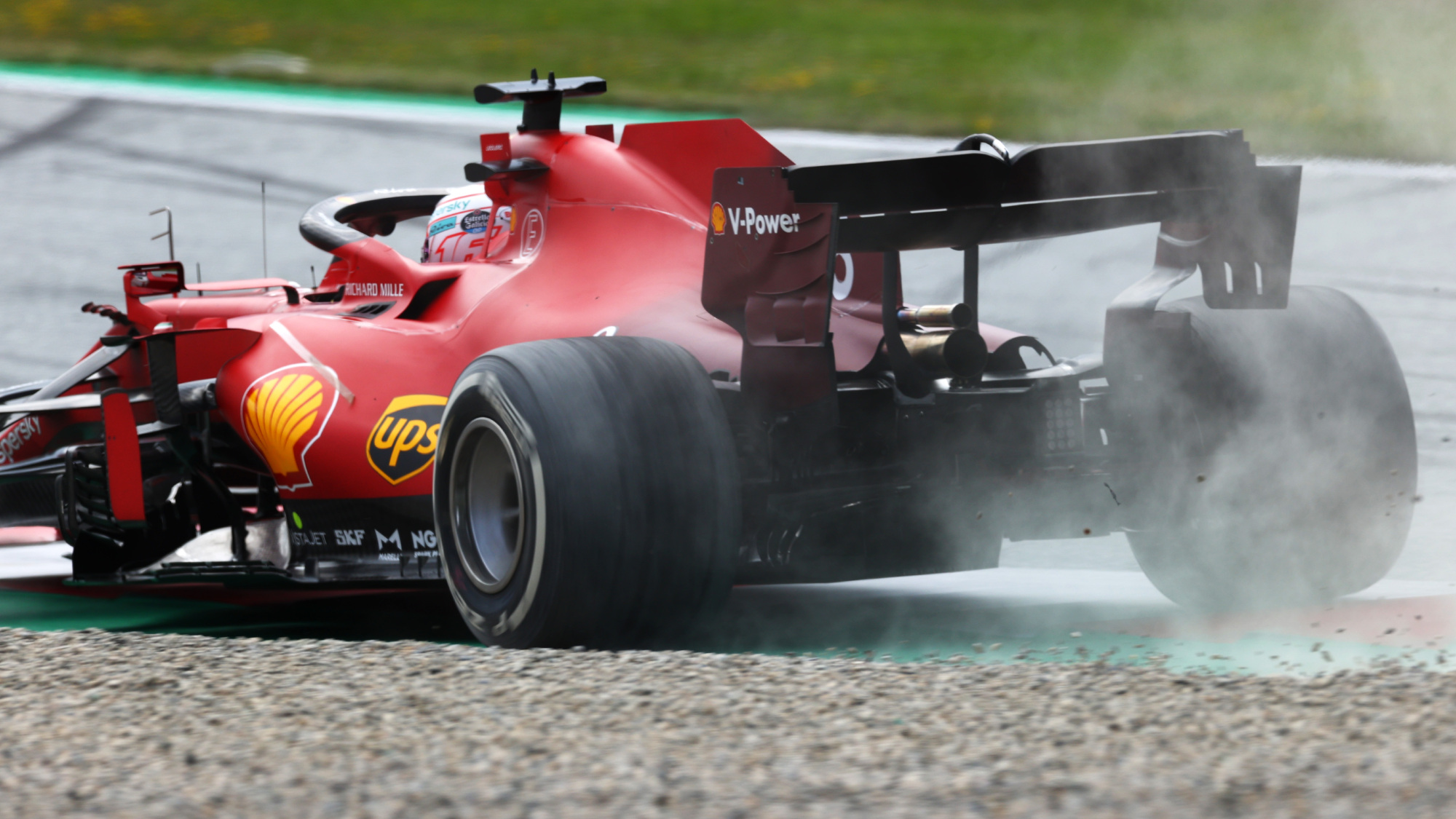 Hamilton told his team on lap 45 that the damage was preventing him from going any faster, as Bottas closed up to him – yet Norris was going even faster. Half a second per lap faster than the Mercedes’s, Norris was only 4sec behind Hamilton.

Ricciardo was increasing the pressure on Gasly, but by lap 46 he didn’t need to make a pass as the AlphaTauri came in for new hard tyres.

Leclerc tried to overtake Perez round the outside of Turn Five on the next lap, and once more the Red Bull forced him into the gravel. It meant another 5sec penalty for Perez.

Bottas was instructed on lap 50 by his team not to overtake Hamilton, and McLaren subsequently told Norris his chance was now overtake.

Mercedes immediately then relented and told the Finn he was free to race his team-mate as they tried to fend off Norris.

Verstappen had no such worries on lap 52, setting a fastest lap of 1min 08.439, but this was then immediately bettered by Bottas when Mercedes told Hamilton to let his team-mate past.

Norris then closed on Hamilton the lap after, going round the outside of the Mercedes at Turn Four, before managing to get him on the next corner – the McLaren was now in the podium places.

Hamilton reacted by coming in to take on fresh tyres, but it was Pierre Gasly who set the new fastest lap on on lap 56, but Verstappen then immediately went faster with a 1min 08.012sec.

Yuki Tusnoda was handed another 5sec penalty for crossing the white pit entry line again on lap 57, whilst Leclerc and Ricciardo began squabbling, almost coming together. 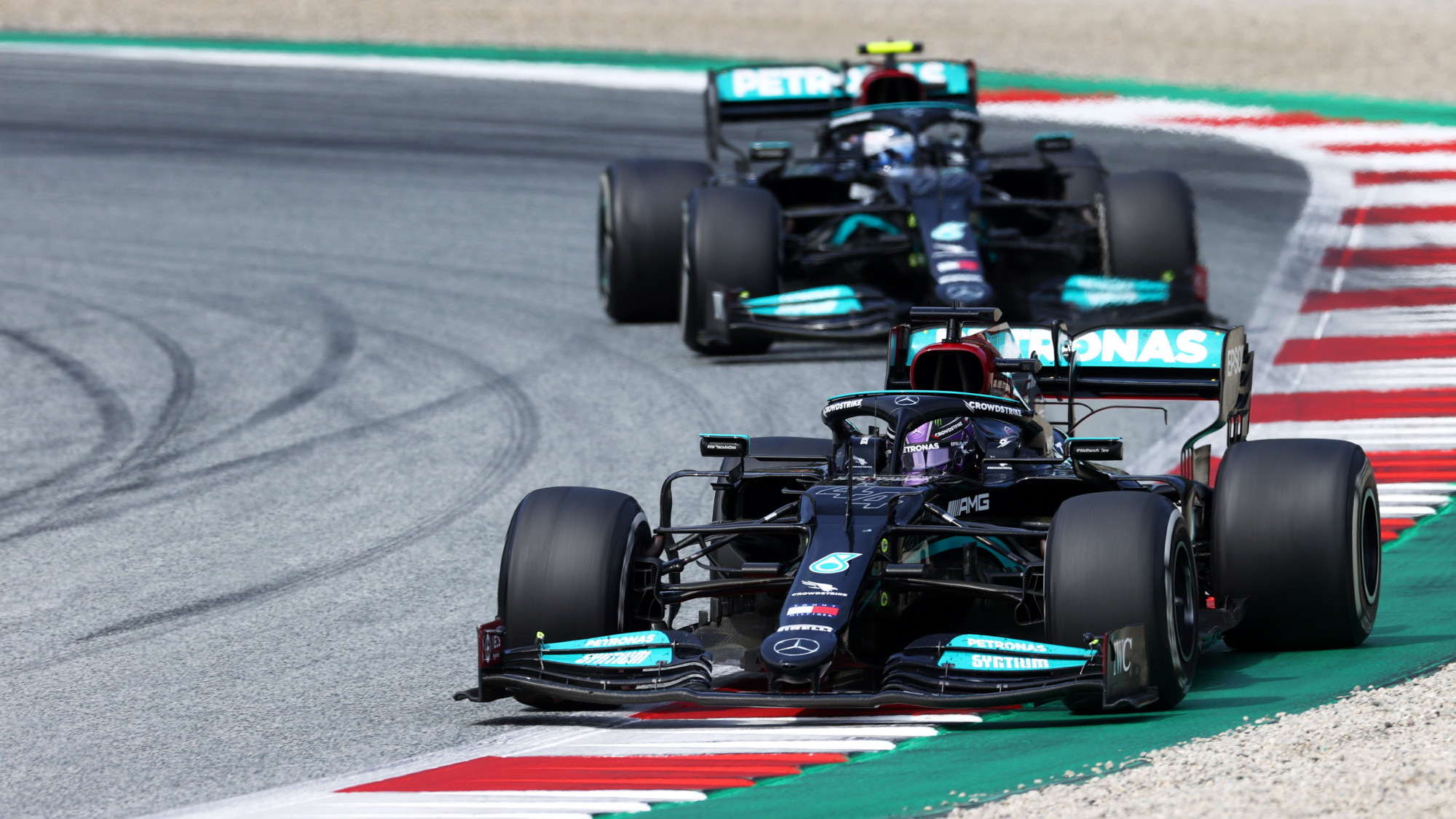 With 11 laps to go, Alonso was closing in on Russell, with the gap down to 0.8sec as they fought for the final points-paying position.

Red Bull then called in Verstappen on lap 60, in an attempt to settle the fastest lap debate once and for all and also ward off any tyre blowout worries, later telling him there was a cut on his rear right.

Alonso almost got round the outside of Russell at Turn Five on lap 61 before the Spaniard ran wide at the first turn of the next lap as he tried to get by.

Verstappen then lapped the pair, delaying Alonso slightly, but the Spaniard was right back on the Williams’s gearbox afterwards.

Sainz scythed up the inside of Leclerc at Turn Three, as the team instructed the Monegasque to let his stablemate past.

Alonso finally got past Russell at Turn Four on lap 68, using his DRS to sail past.

It was an easy Sunday drive for Verstappen though, who set scarcely believable fastest lap of 1min 06.200sec towards the end to claim his fifth win of the season.

A final lap tangle for Räikkönen and Vettel sent the pair tumbling down the order as the race leader took the chequered flag.

The Finn had tried a cutback after losing 12th to Vettel at Turn Four but got a little too close for comfort and collided with his former Ferrari team-mate.