Lando Norris has given the 2021 McLaren MCL35M its first run out at a rainy Silverstone.

The team unveiled its new car last night via live stream at its McLaren Technology Centre in Woking, and is now running a 100km filming day ahead of pre-season testing in Bahrain next month.

Norris was the first driver to turn a wheel in the new McLaren Mercedes era, taking the car onto a wet Silverstone circuit for a shakedown. Teams are able to conduct two filming days during a season, with a 100km-distance limit in each.

The appearance of Norris in the McLaren was a surprise, following the launch event where Daniel Ricciardo was named as the first driver due to get behind the wheel of the new car.

However, on a rainy February day at Silverstone, there was no initial sign of the Australian.

Speaking at the MTC yesterday ahead of the launch, Norris said that he was focused on making another step up in performance following a strong year in 2020.

“I’m really excited to be back working with the team ahead of my third season in Formula 1,” he said.

“Every time I get into the car I feel like I’m growing in confidence and experience, which helps me build my performance year-on-year.

“I’ve been working hard personally throughout the off-season to be as sharp as I can when we get to pre-season testing, and I can’t wait to get back in the car soon.” 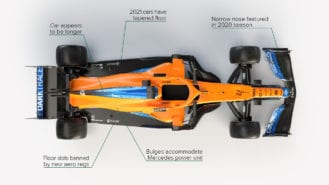 Despite the token system limiting McLaren’s ability to develop their car between the ’20 and ’21 seasons, the team has focused on accommodating the new Mercedes power unit in the back of the car.

McLaren technical director James Key said that the team had to fit the M11 power unit into the car while making limited changes elsewhere as to remain within the homologation rules.

“We had to respect the homologation process by not changing things that didn’t really need to change.

“Fundamentally, the architecture of the car is quite different, but the homologated areas are as similar as possible. Among all of the other challenges it added an extra dimension which probably led to a slightly suboptimal approach compared to if you are absolutely free.”