From the start of the F1 season, Mercedes has been adamant that its 2022 car has strong underlying pace: it just hasn’t been able to find the key to unlock it.

That changed in Spain, where Mercedes was right in the mix with the frontrunners, despite Lewis Hamilton’s lap 1 clash that left him 50sec adrift of the leader.

Neither Ferrari nor Red Bull had smooth races either, but analysing the data shows that George Russell made the podium on merit with race pace that was often comparable to Max Verstappen.

It bodes well for the coming weekend in the narrow, twisty streets of Monaco, as well as the following race in Baku, which combines long straights and tight corners.

Alpine, too, will have left Spain enthused about the season ahead, as the team showed that its drivers could fight from the back and the front of the field. 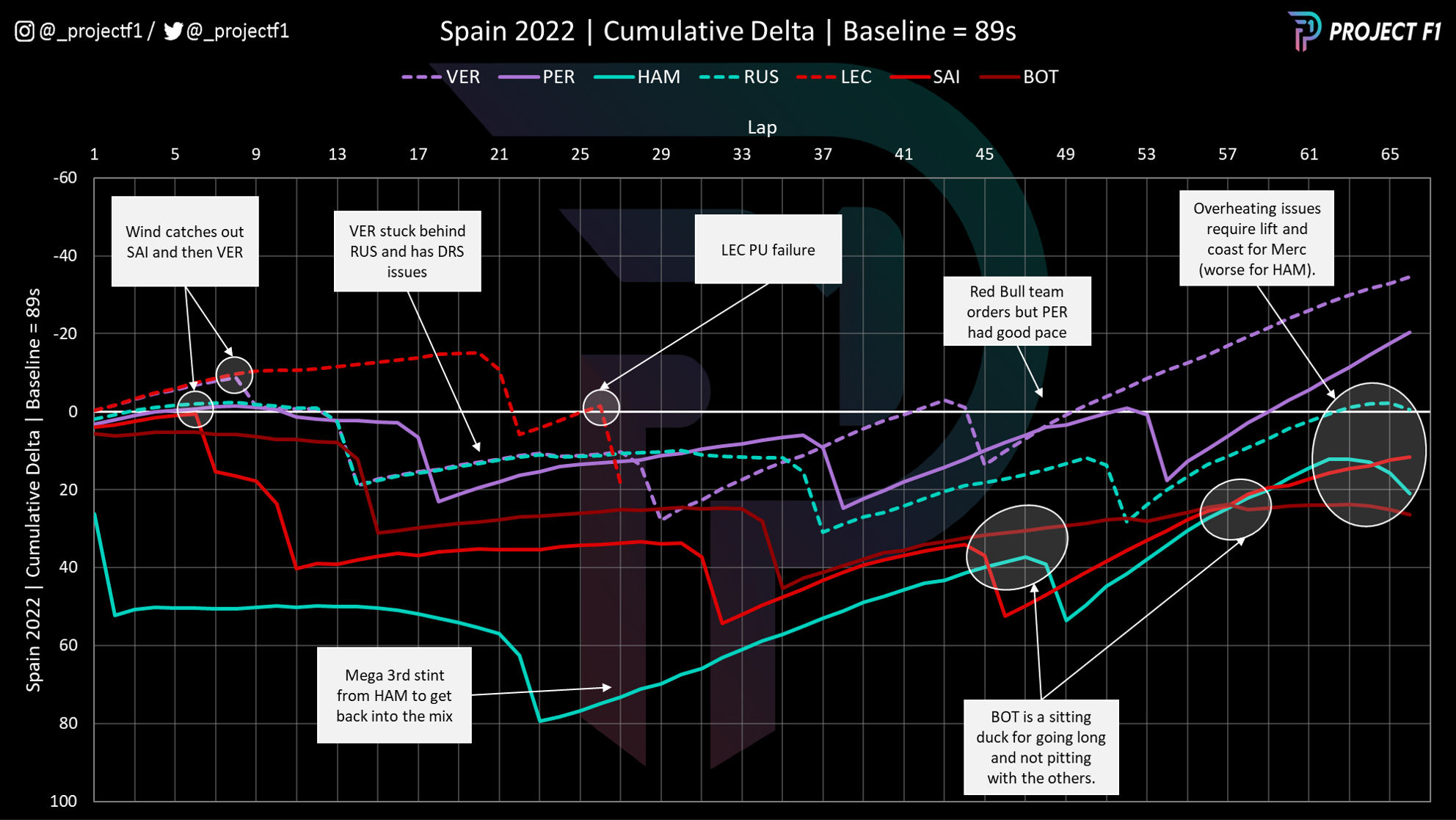 Russell muscled his way into third place at the start of the race, and the cumulative delta chart above shows how his initial pace was enough to keep Sergio Perez at bay.

Lewis Hamilton immediately lags way behind, as his lap 1 clash and subsequent pitstop for a puncture slows his average time. During the first stint, the line is flat as he hunkers down for a phase of tyre management to set himself up for an aggressive third and fourth stint, which brings his average lap time tumbling, putting him back in the fight with the Ferrari of Sainz.

At the front, Charles Leclerc and Max Verstappen pull away from George Russell, with Perez in fourth unable to make it past the Mercedes.

Then the blustery Turn 4 catches out Sainz and Verstappen; the Red Bull driver dropping back behind Russell. The Mercedes is clearly holding up the defending champion, but Russell’s ability to maintain position indicates the car’s potential, both in its its pace through the tight and twisty sector three and along the long main straight: a proof point that Mercedes has taken a step forward in its issues with drag.

The caveat is that Verstappen was hampered by an intermittent issue with his DRS flap. The benefit of his early second stop, committing himself to a three-stop strategy, is shown in the data: the Red Bull’s average lap time tumbles and he pulls away from Russell in clear air. 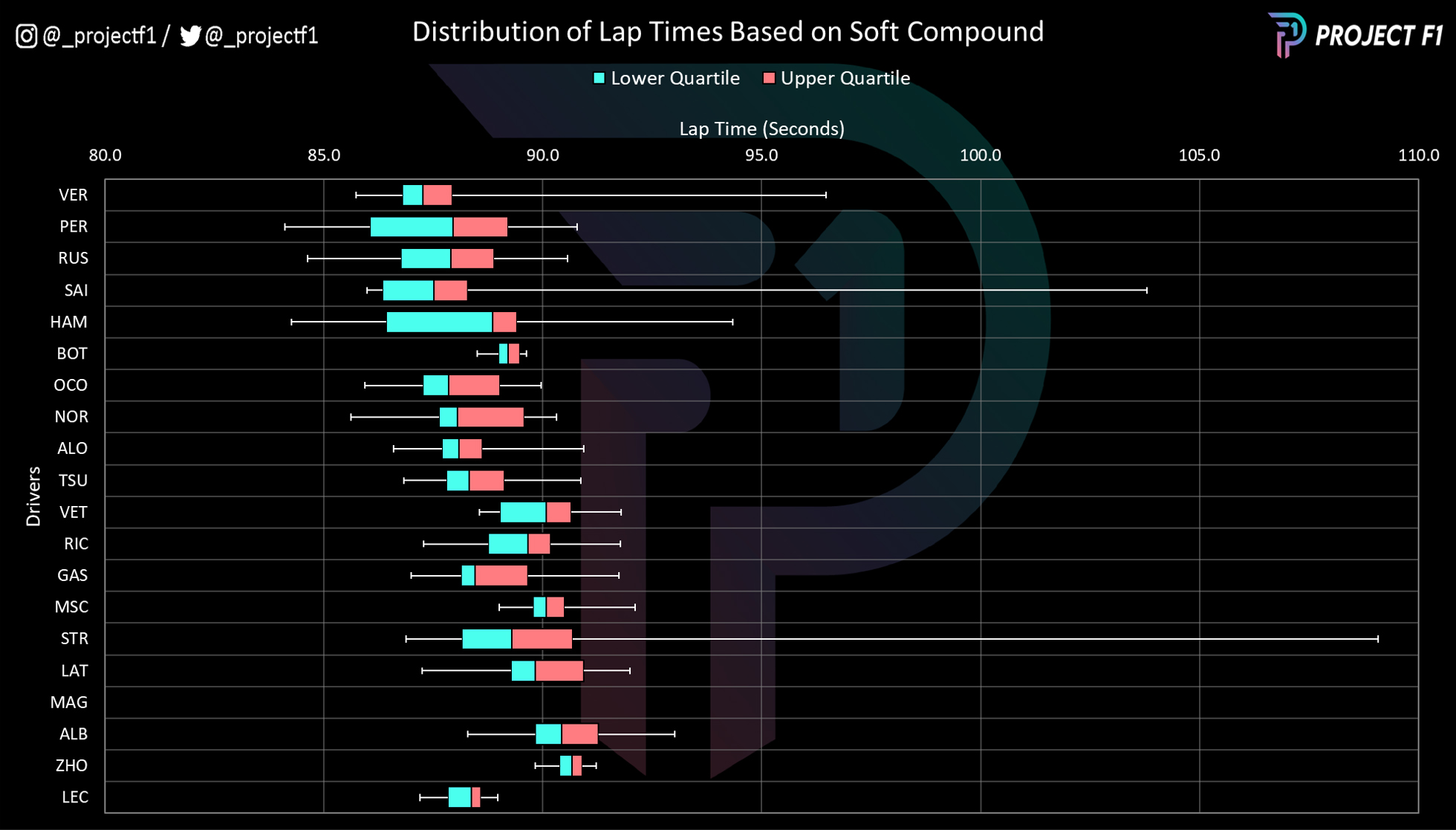 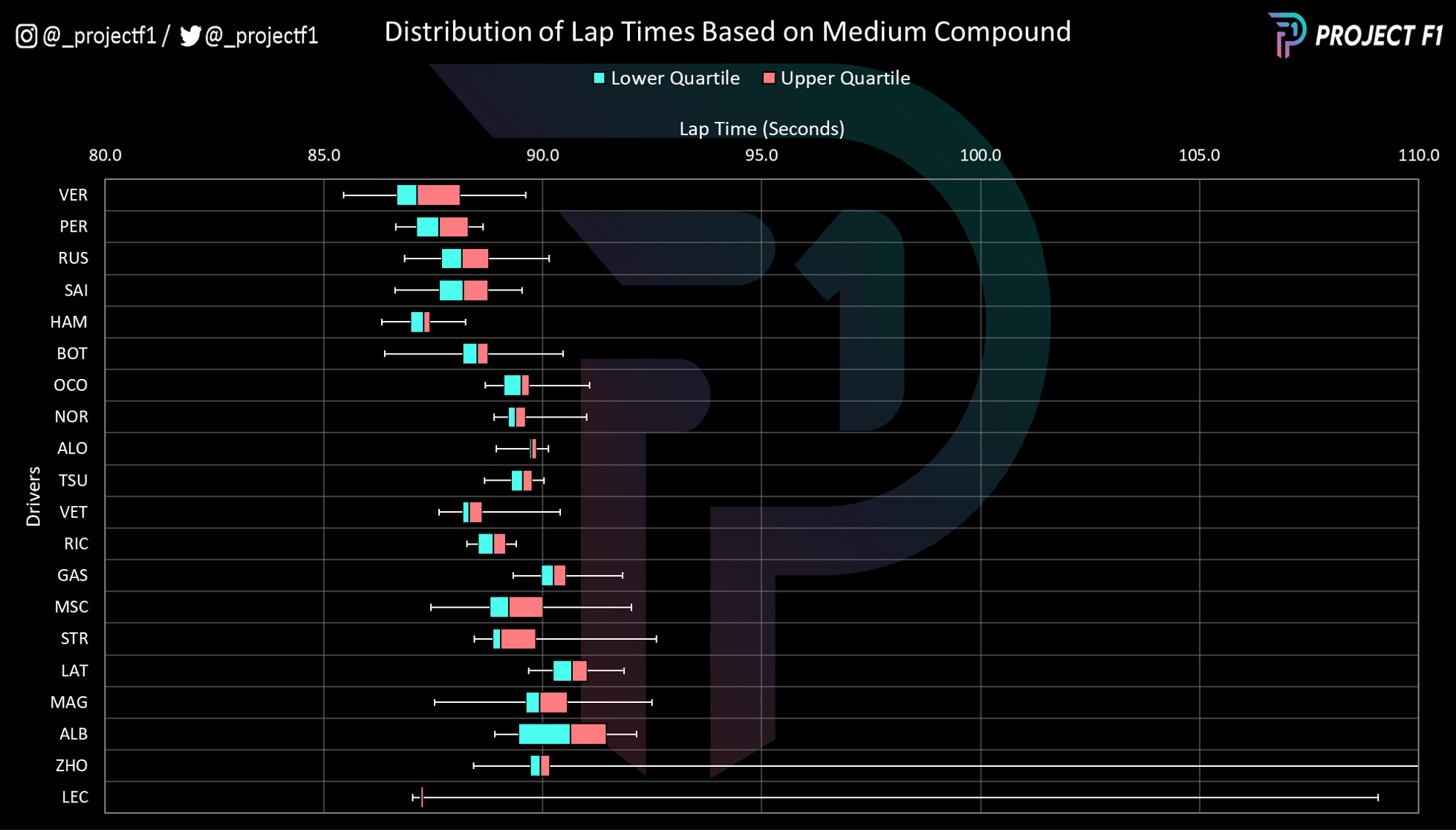 Comparing the lap times set on both soft and medium tyre compounds (only Magnussen used the hard) helps to show pace and degradation. Here, Russell’s performance on the soft compound was on par, if not, slightly better than that of Perez.

However it is worth noting that Perez had gone longer on the first two stints and had to sacrifice some pace in order to the optionality of a 2-stop strategy open.

Regardless of this, the headline pace of the Mercedes from a good qualifying position was impressive – and certainly enough to put the cars up there with the front two teams.

While Hamilton’s pace is further off and closer to that of the midfield on soft tyres, it’s worth putting this in the context of the early impact in the race and his slower first stint.

His medium-tyre pace is a match for Verstappen, which team boss Toto Wolff may have had in mind when he said that Hamilton could have been in line for the victory. 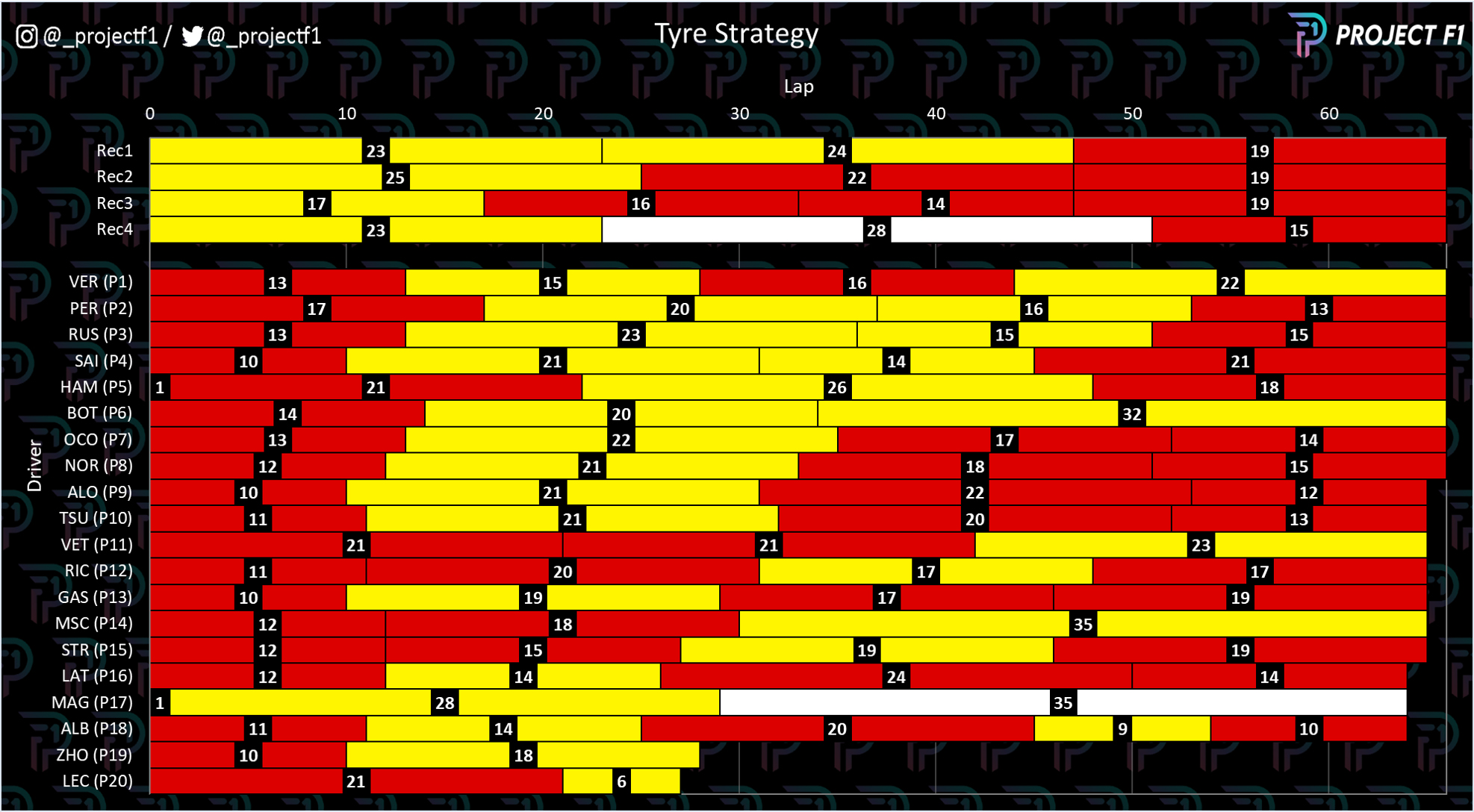 Pirelli’s recommended strategies are shown at the top of the chart and were almost universally ignore by the teams, who largely started their cars on soft (red) tyres and opted for a three-stop race.

Hamilton was the only driver to get an effective two-stop race to pay dividends (if you ignore his lap 1 stop). The only other point-scorer to take this approach was Valtteri Bottas who became vulnerable in the closing stages of the race – despite having the opportunity to pit a third time and avoid the predicament.

Vettel was the next best finisher on this approach but was just outside of the points after seeming to go backwards in pace relative to the field.

Taking this context into account makes Hamilton’s drive all the more impressive, particularly when considering his pace on the yellow mediums relative to the rest of the field (see chart 3). Hamilton was able to be competitive with Verstappen despite having a 26-lap stint on the tyre. 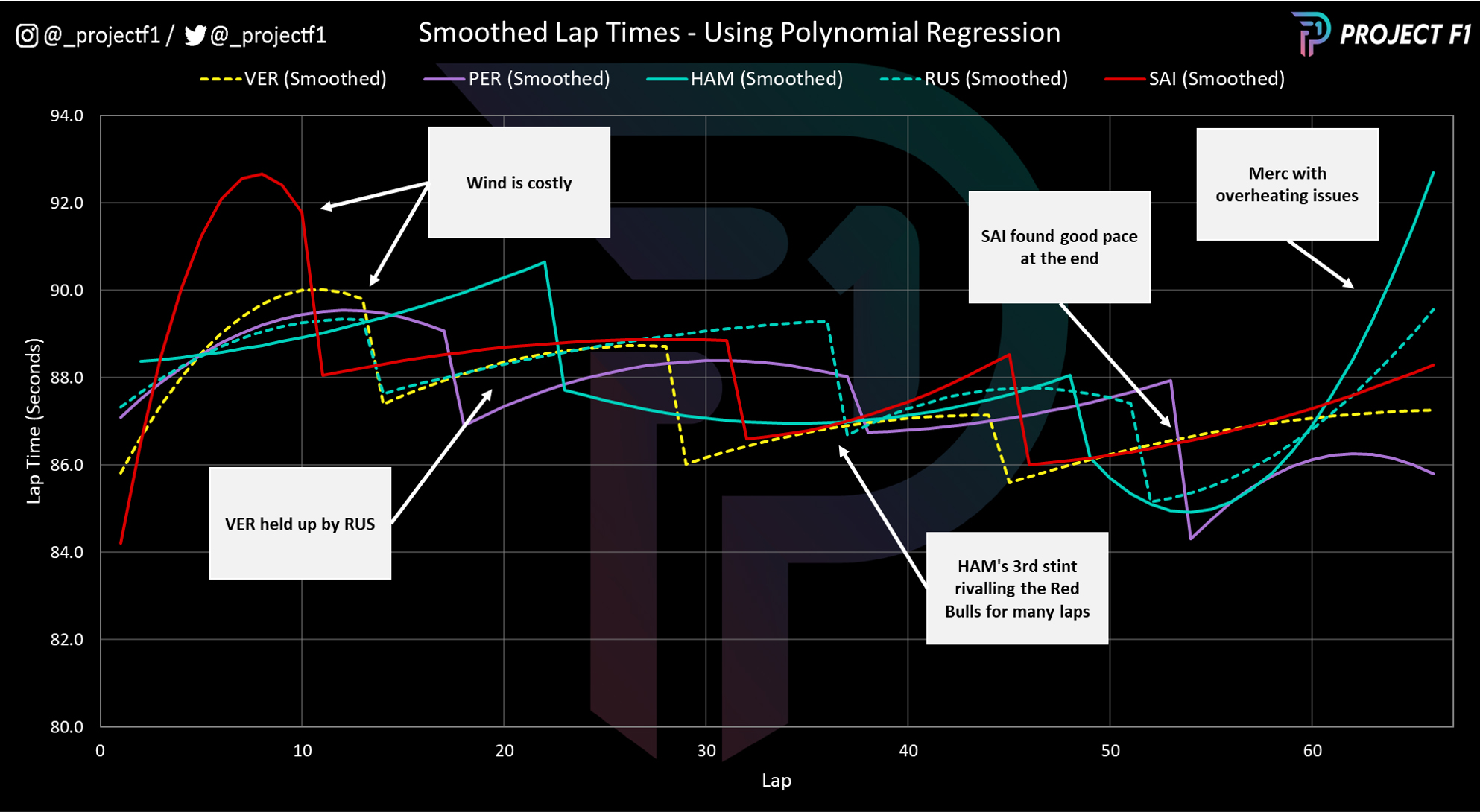 Still not convinced by Hamilton’s mid-race pace? This smoothed plot of each lap time demonstrates how he was lapping at a similar rate to Perez and Verstappen during his second and third stints until his overheating issues caused him to slow.

Russell suffered the same fate at the end of the race too, but still showed competitive pace compared with Perez through most of the race. 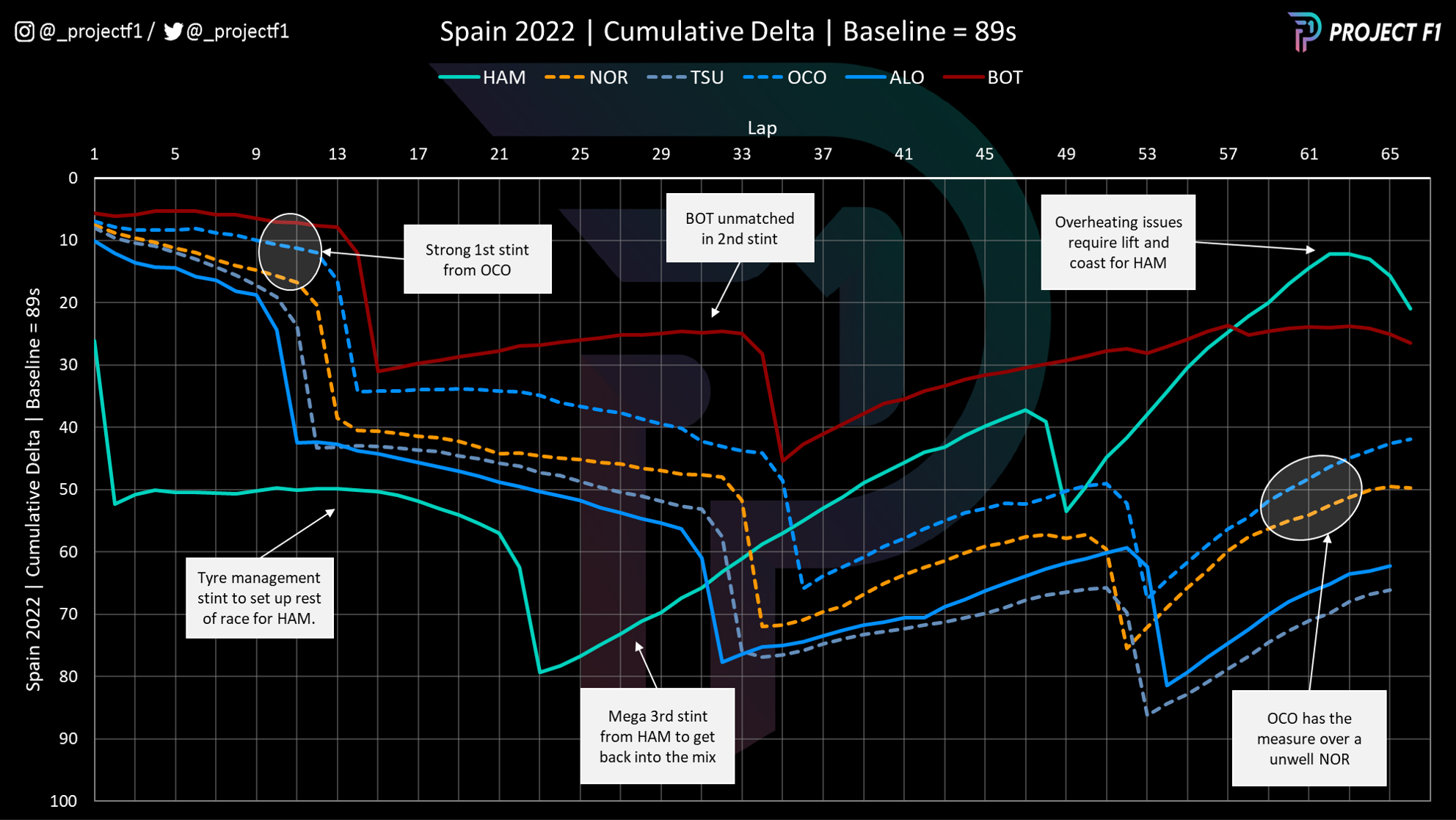 Mapping the cumulative lap data further back in the field shows Alpine following a similar — if less-dramatic — path to Mercedes.

Ocon, like Russell, was able to demonstrate what the French manufacturer is capable of from a representative starting grid slot. While his race was a bit anonymous, he remained clear of the ailing Lando Norris’s McLaren but without being able to match the pace of Bottas.

Following Hamilton’s trajectory, Alonso could showcase what the Alpine was capable of from the back of the grid. He was able to climb through the field and get the undercut on Yuki Tsunoda to bring the car into the points.

The graph shows that Bottas had an opportunity to make a third stop when Hamilton pitted, with enough time to get out ahead of the Mercedes, but that this window rapidly closed as Hamilton surged closer, and then past the Alfa Romeo. 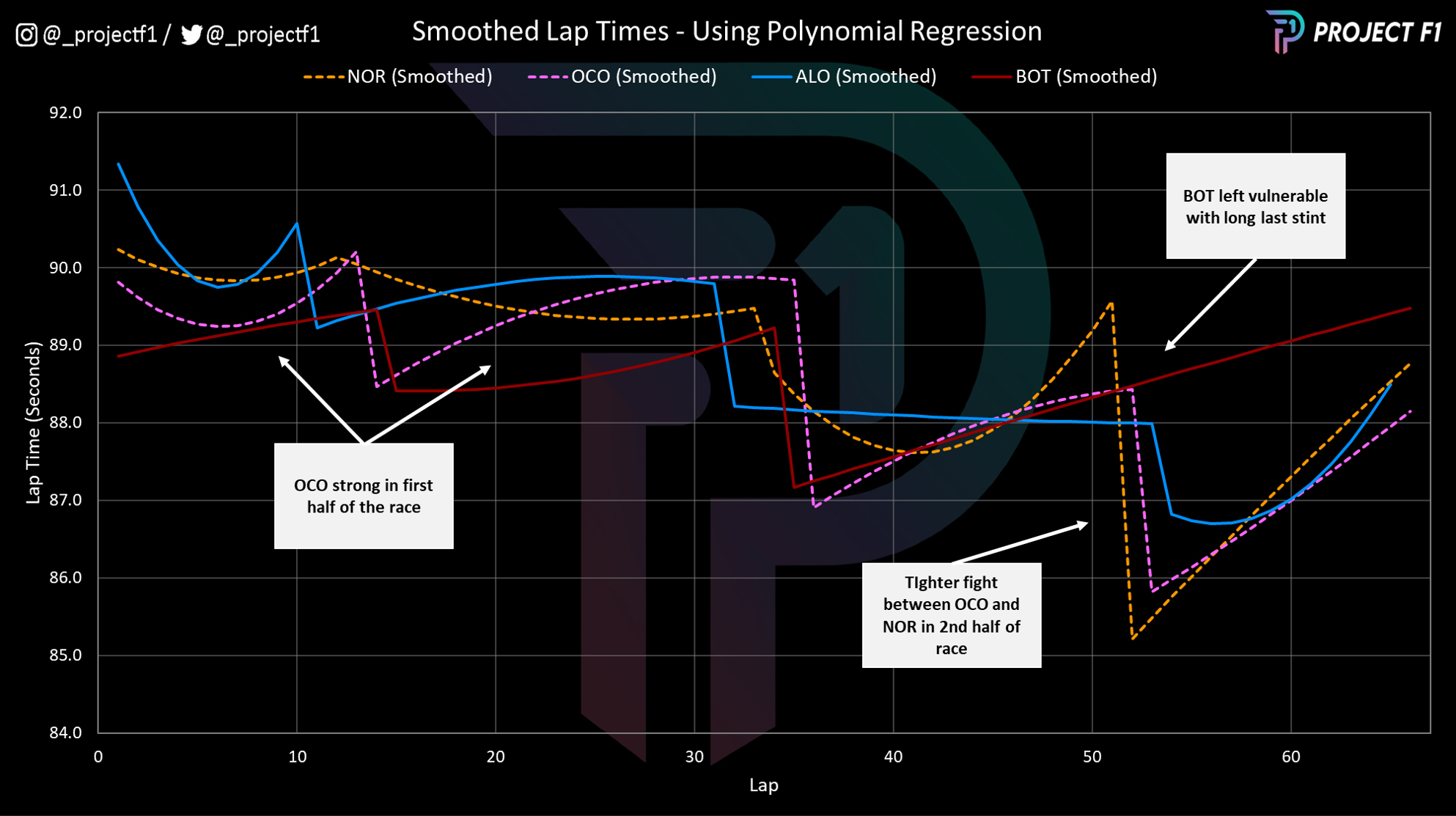 Looking at each lap time brings attention to how Ocon’s race was made by a very competitive first half that allowed him to match the pace of the Mclaren after the cars had lightened up due to fuel burn.

Alpine’s strategy department also made the right decisions for both drivers, ensuring they didn’t endure the same pain as Bottas who was stuck in no man’s land in the final stint.