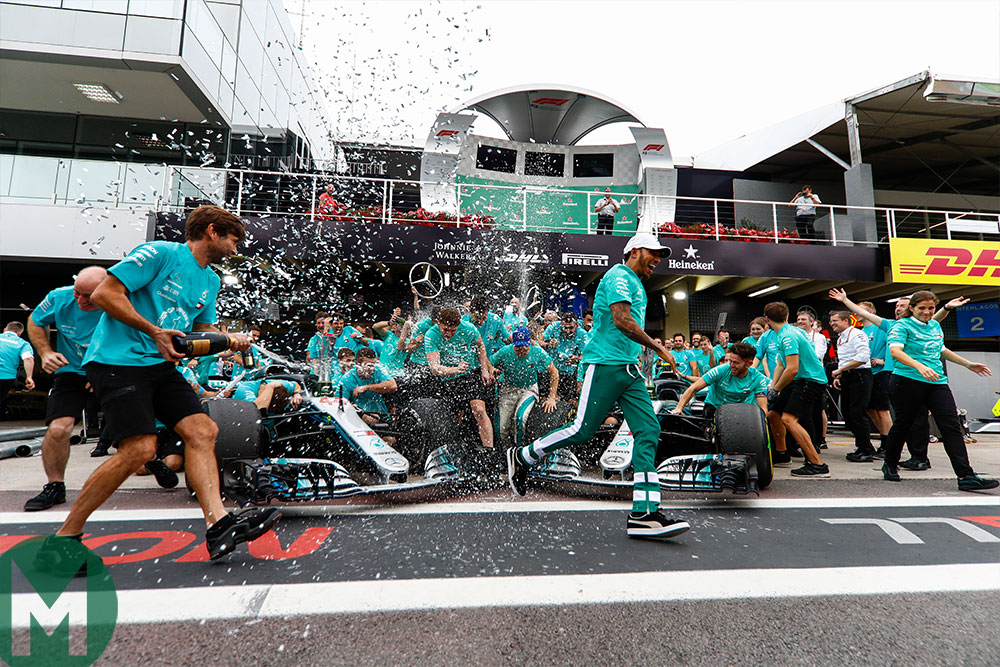 For the first time in several years Mercedes did not build the fastest car in Formula 1.

That honour went to Ferrari, which seemed to make a car suited to every circuit.

And yet Hamilton is a five-time world champion and Mercedes has just taken its fifth constructors’ title. But next year, Mercedes will have to reach new levels of perfection, Red Bull-Honda will be hoping to challenge from the start of the season and Ferrari will be baying for revenge.

This year, there were at least five occasions where strategy calls shaped the Silver Arrows’ season. Here they are.

Albert Park is one of the hardest tracks to pass on and it’s demanding when it comes to fuel usage as well, which means that track position is key.

Hamilton and Mercedes were slightly faster than Ferrari, so Lewis was able to retain pole position and take control of the race from the front.

In response, Ferrari pitted Räikkönen as early as it could afford, which meant that the Finn came in on lap 18. Mercedes covered off the move by pitting Hamilton on the next lap.

This sequence of pitstops left a window of opportunity for Vettel and Ferrari: if a safety car or virtual safety car came out before Vettel stopped for tyres, Hamilton could lose his lead.

And that’s exactly what happened when Romain Grosjean ground to a halt because of a loose front-left tyre as Haas botched a second pitstop. The VSC was called into action.

In order to calculate the lead that Hamilton needed in case of a VSC, there was an intense amount of data and calculation needed, much of that accrued through practice sessions across the weekend.

Mercedes thought it had worked out that gap correctly; it turned out there was a bug in the software, which meant that the gap was wrong all along. In the seven laps before the VSC was deployed and Vettel pitted, Hamilton managed his pace – but the data was incorrect.

In stopping under a VSC you lose less time compared to the cars still on track – around half as much in fact because those not coming into the pits have to slow to a fixed speed – which means stopping costs you less time than usual.

It was a painful mistake for Mercedes, one that led it to lose the opening race of the season for the second year running.

Bahrain Grand Prix: Mercedes fails to go for the jugular

The pace of the Ferrari in Bahrain was clear.

It sealed a front row lock-out ahead of Bottas, who was on his own as Hamilton started in ninth after a gearbox penalty was applied.

Räikkönen pitted on lap 35 in a stop that left Ferrari mechanic Francesco Cigarini with a broken tibia and fibula after he was struck by the car. This left Vettel on track – he couldn’t pit – and he had to extend the life of his soft tyres by around 30 per cent.

To account for Ferrari’s unfortunate pitstop, Mercedes could have pitted Bottas or Hamilton and gone for the jugular. Whether it was a show of sportsmanship or (more likely) obliviousness, perhaps not realising that Vettel had just enough life in his tyres, Mercedes didn’t pit either of its drivers.

That left Bottas with one chance to overtake Vettel who, by this point, was running on extremely worn tyres. When Bottas caught Vettel at turn one, the Ferrari almost two seconds a lap slower at this point, the Mercedes driver’s overtaking manoeuvre was executed without conviction and he ended the race behind the Ferrari.

This race wasn’t so much down to a Mercedes mistake but brilliance from Red Bull.

Ferrari locked out the front row, Vettel on pole, but Räikkönen didn’t get away cleanly, which lead to Vettel having to fend off Bottas for the lead.

The safety car once again contributed to the race result.

A perfect call to box and a clinical pitstop from Mercedes gave Bottas the lead, while Vettel’s team – cautious after the calamity in Australia – gave itself a bit more time for its stop.

The safety car came out 21 laps before the end of the race as the two Toro Rossos collided and it took a couple of laps for race director Charlie Whiting to make a call.

When Whiting did decide to bring out the safety car, it was too late for the leaders – Vettel and Bottas – to pit, but Red Bull decided to pit both of its cars. Pitting under the safety car lost Red Bull two-thirds less time than it normally would have.

That move gave Red Bull a first win of the season through Daniel Ricciardo, and it showed just how effective the right strategy call can be.

Hamilton was not brought into the pits under the safety car and, after the race, many judged this to be a mistake from the Mercedes team. Hamilton ended up fourth, one of his worst results of the year, with Bottas runner-up.

The next major strategy talking point of the season for Mercedes came in Austria when it all seemed to go wrong for the team.

Bottas took pole from Hamilton with the two Ferraris right behind them on the grid. However, on lap 14, a hydraulic failure led to his Mercedes pulling to the side of the road and a VSC being pulled out.

Several strategists took the view that the VSC would be deployed for a short period of time, so grabbed the chance of a time-saving pitstop – in all likelihood saving themselves about 10 seconds from a normal pitstop under racing conditions.

At the time of the VSC, Hamilton, leading the race, was at turn six, giving the team (under normal circumstances) plenty of time to react and pit him.

A message from Charlie Whiting, that the VSC would be deployed for at least one full lap, clarified the situation. This was the moment Mercedes should have reacted, bringing Hamilton in for a stop – as all five cars behind him did.

The call wasn’t made in the drama of a hydraulic failure for Bottas, and when Hamilton finally came in on lap 25 he had lost the lead and emerged in fourth.

Mercedes’ chief strategist James Vowles was heard on the radio taking the blame for the decision and apologising to Hamilton.

It was all academic as Mercedes suffered a double technical retirement, with Hamilton suffering from a lack of fuel pressure. This was the first double DNF for the team since the 2016 Spanish Grand Prix when Rosberg and Hamilton crashed at the start.

Ferrari also failed to maximise its advantage and, although he took the championship lead by one point, Vettel could have had a four-point lead had Ferrari used team orders to swap him and Räikkönen.

At Hockenheim, Mercedes was hesitant to make the right call on tyres (as you’ll see in the below radio messages) and in changing conditions it was actually Lewis Hamilton’s late decision to stay out that made the difference.

This radio communication between driver and engineer paints a picture of the situation on lap 52, when Vettel crashed into the stadium section.

[Hamilton pits but makes last-second dive back onto track]

Lewis Hamilton: “Kimi is staying out.”

PB: “Negative, negative. So, staying out. Staying out.”

Lewis made the right call not to pit but his decision to cut the grass as he swerved out of the pitlane went to the stewards, where he was found not to have broken the rules.

This is a good example of when a world-class driver can help spare the blushes of a team, and it helped Mercedes secure a 1-2 with Bottas in second.

Although Hamilton won the race after Bottas was ordered to switch places with him, there was a major strategic mistake from the team.

It proved a costly mistake as Hamilton was forced into a hard fight against Vettel to the detriment of his tyres, and it led to that controversial use of team orders.

Toto Wolff took immediate action following the race and said he would try to stay out of strategy discussions.

“James flies the aeroplane and all I can do is comment and give him feedback and input but ultimately it’s his decision what to do,” said Wolff after the race.

“He’s in command at that moment even though from my ranking I’m higher up. But I will not interfere. It’s his call in the end,” said the Mercedes boss, admitting that his own input could be a distraction.

Vowles ordered “quiet on the radio” after this close call at Sochi.

Since the Russian Grand Prix and this costly learning exercise, Mercedes has had a couple of bad races where even strategy couldn’t really have helped.

First, it was the United States Grand Prix where the team prioritised its qualifying set-up, therefore compromising the race with Hamilton starting on the supersofts rather than the ultrasoft tyres of his rivals.

Despite taking pole he lost the lead off the start and, from that point on, could do nothing to stop Räikkönen from winning.

More drama in Mexico as the Red Bulls proved faster at high-altitude. It was little surprise that Verstappen won; the Mercedes chewed through its tyres like a hungry hippo and looked especially sluggish in race trim.

The fact remains that Mercedes has won five consecutive double championships now – an impressive feat – but will it be able to continue that into the next decade? Ferrari’s record from the beginning of the millennium is in danger of being broken.

Mercedes is open to its own mistakes and examines them at every turn. But next season there will be no room for error with perfection counting for so much, as always, in 2019.

Red Bull-Honda’s partnership could prove profitable and you can bet that Ferrari will come back harder than ever after this punishing season.