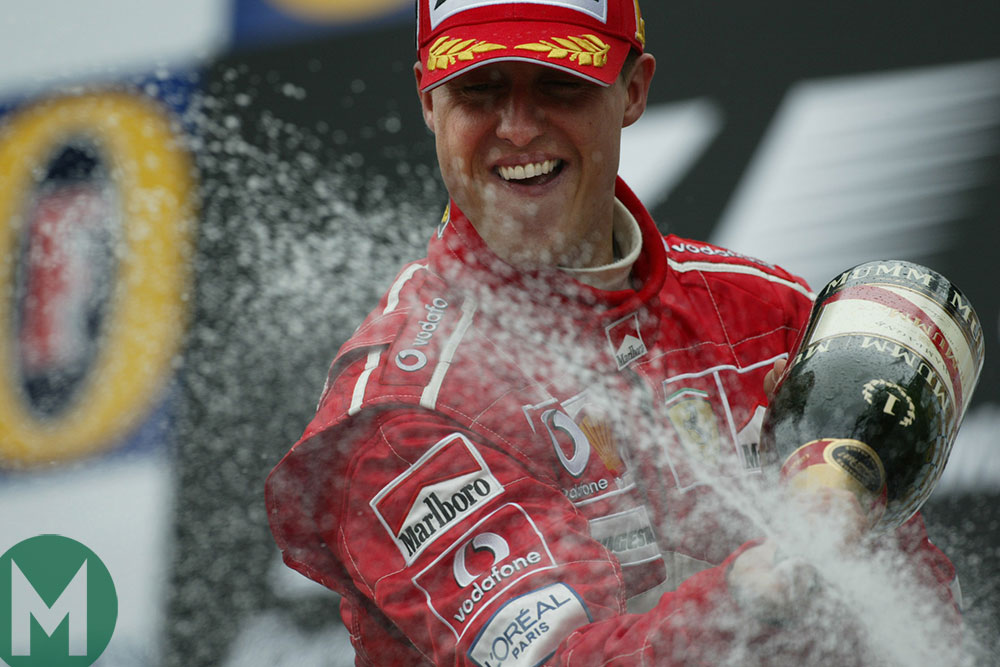 Seven world titles, 91 Formula 1 victories, 155 podium finishes, 142 Grands Prix led… whether or not such numbers are one day surpassed, Michael Schumacher’s statistics will forever mark him out as one of our sport’s most remarkable competitors.

His speed and consistency were often beyond compare, his ruthlessness an acquired taste that continues to divide opinion almost 15 years after his final coronation.

From a personal perspective, my biggest regret about his career is that he returned to racing. What should have been his final race, Brazil 2006, could have been the perfect swansong. A puncture dropped him down the field and compromised his already slim chances of taking an eighth title – Fernando Alonso required but a single point, a blown engine having stopped Schumacher in Japan – but that didn’t dilute his appetite for a fightback, its apotheosis being a thrilling late-race dive to pass Kimi Räikkönen’s McLaren into the first turn. It was enough only for fourth place, but he left F1 having underlined that he was still one of the best.

When he returned four seasons later with Mercedes, he no longer had the equipment to fight at that level – nor did he have the vim. The trademark precision had gone, too, and what might once have been an incisive pass via a closing gap became a clumsy brush of wheels while squabbling in the lower reaches of the top 10.

There would be a singular podium finish, in the chaotic 2012 GP of Europe at Valencia, but this was Schumacher Light. When he bowed out for a second time, again at Interlagos, he finished an unremarkable seventh – not quite as memorable as his original farewell.

Schumacher’s most controversial incidents – the clashes with title rivals Damon Hill (Adelaide 1994) and Jacques Villeneuve (Jerez 1997), or the blunt manoeuvre that almost put Rubens Barrichello into the pit wall at 200-odd mph during the 2010 Hungarian GP – monopolised the headlines, but there was also another side to him, unseen by the wider world, which outlined why he was often a step ahead.

Take his only Le Mans appearance, in 1991. Before the race, his Sauber-Mercedes team organised a PR stunt – a lap of the circuit on two wheels – and lent bicycles to all and sundry. While Mercedes juniors Karl Wendlinger and Fritz Kreutzpointner tried to tear away at the front, Schumacher hung back.

Reporting the event for Motoring News, my friend and colleague Mark Skewis observed the German dismounting from time to time and saw him patting kerbs and gravel traps. When he chatted to him about it, Schumacher explained that he was simply trying to establish whether the surface was firm or smooth enough to allow him to use an extra couple of inches of track here and there.

Pre-race favourites Jaguar and Mercedes were plagued by reliability problems that allowed Mazda to take an unexpected victory, but when – many years later – I asked Mercedes boss Peter Sauber whether he had any favourite Schumacher memories, he cited this race.

“Michael was our quickest driver,” said Sauber, “but it wasn’t just that. He was also much more careful with the car – he used less fuel, was easier on the tyres, easier on the brakes…”

And a former Ferrari PR man once related how he was tidying up after a media event at Fiorano, during which Schumacher had been testing for most of the day. In the evening, he noticed a light glowing in the adjacent farmhouse that contained Enzo’s old office. Wandering across to investigate, he found Schumacher unwinding from his day’s endeavours by watching a film… while wearing a crash helmet laden with weights, so that he could simultaneously do some neck exercises.

But it wasn’t all hard work. During the 1990s and early 2000s, there were occasional soccer tournaments during race weekends. Sometimes these were organised formally by a sponsor, at others – usually in Brazil – they were more spontaneous, because the hotel happened to have a couple of pitches and it seemed like a good idea. Drivers joined in from time to time, but Michael was always the most likely to appear.

Matches between British and German media (plus Schumacher) were usually the most keenly fought, but attempts to rob Schumacher of the ball were hampered not so much by his first touch as by his speed: he was lightning quick on the pitch, too. And in 1995, his second title year with Benetton, he was happy to participate in assorted paddock activities his team had organised. That’s how, at the Nürburgring, I came to be drawn against him in the first round of a darts tournament.

I’m not sure he’d ever seen a dart before, but he competed with grace and good spirit; it’s not much of an accolade, but I can claim a 100 per cent record against Michael Schumacher at darts.

Little more than a year beyond his final Grand Prix appearance, of course, Schumacher suffered serious head injuries in a fall while skiing with his racer son Mick, last season’s FIA F3 champion, and to this day continues to receive treatment at home in Switzerland.

As he reaches his 50th birthday, I can but wish him strength and reflect on his career like this. There were some who felt he made the sport predictable and, certainly, there were times when you’d board a long-haul flight fairly certain about what awaited at the other end. The overriding emotion, though, will always be a sense of privilege at having watched a great athlete at the peak of his powers.