The Chinese Grand Prix before 2006 had been far from kind to Michael Schumacher. In 2004’s inaugural race he’d finished a lapped 12th after a haphazard run. In 2005 he somehow collided with Christijan Albers‘ Minardi on his pre-race recce lap, then spun out of the race proper. Behind the safety car.

But in the 2006 Chinese Grand Prix it was as if he was making up for the previous aberrations. And then some.

It was to be the last one of his mammoth 91 F1 win total and, appropriately, the victory featured many of his hallmarks. Aggression; never giving up; wet-weather skill; relentless pace; and most pertinently the ability to tear through whatever tiny sliver of opportunity opened, even if the sliver was scarcely perceptible.

Appropriately too, in 2006’s Chinese round he had sizeable odds to overcome. Both qualifying and the first part of the race were run in the wet, and while that was usually up Schumacher’s street this time his Ferrari’s wet-weather Bridgestone tyres were not up to the task compared with the Michelins of most of his rivals. 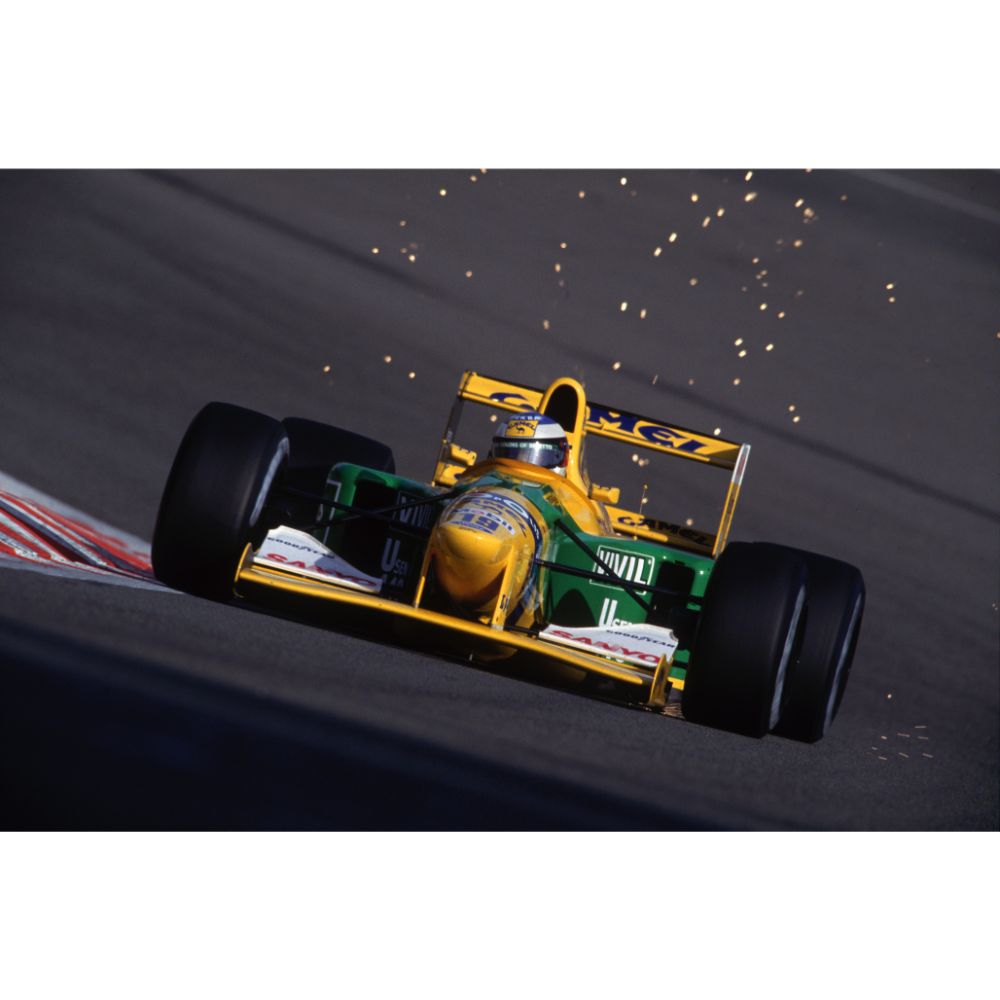 He had a formidable rival to overcome as well. Schumacher was locked in a title battle with Renault’s reigning champion Fernando Alonso. Alonso had started the year superbly, but things turned from mid-year, around the point that the FIA banned the ‘mass damper’ system.

The proscription clearly impeded Renault more. By China it was very much game on; Alonso arriving just two points ahead of Schumacher and the latter with all the momentum with three races remaining.

Alonso was feeling rather bruised; his sense of injustice increased by a harsh penalty for impeding Schumacher’s Ferrari team-mate Felipe Massa in Monza’s qualifying the previous time out.

It looked like it would matter not though as in China he took a comfortable pole, with Schumacher down in sixth, then cleared off early in the race. He was some 22.7sec clear of Schumacher after 11 laps.

Matters turned at the first pitstops: Alonso’s new intermediates refused to come in

Underlining Schumacher’s massive personal contribution though, aside from him, Bridgestone runners could be found only in the bottom nine starting slots.

Matters turned at the first pitstops however. Alonso, almost alone, chose to change his intermediate tyres with a view to the drying track, as he was concerned with his wear, bolting on new fronts. And they refused to come in.

Suddenly his team-mate Giancarlo Fisichella in second and Schumacher, now right on Fisichella’s tail in third, tore into his lead by four seconds per lap. Before long the pair were past him. 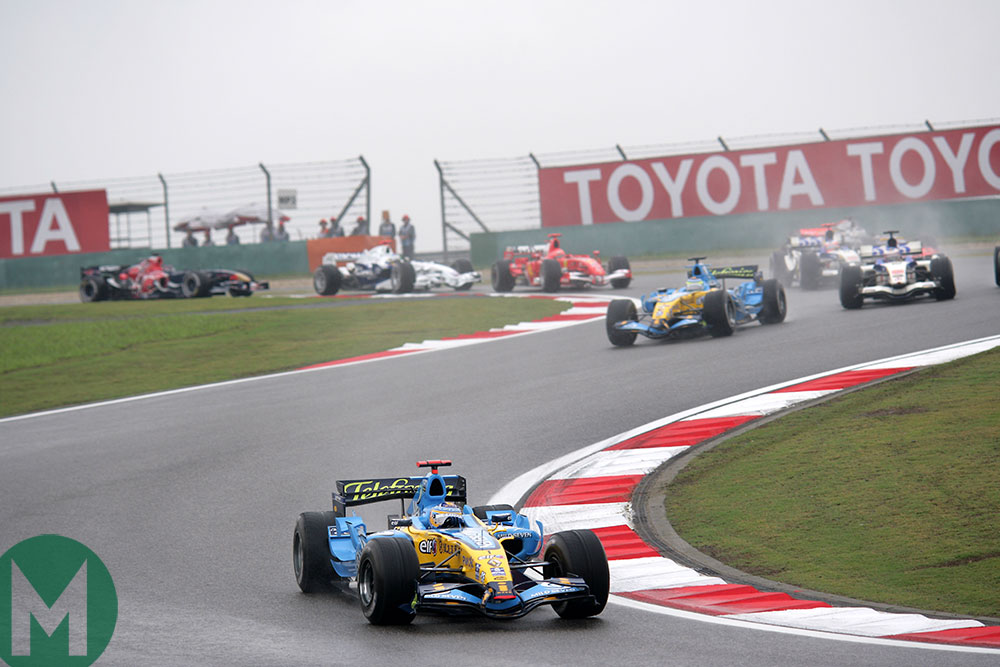 Alonso switched at the earliest opportunity to slicks – as the grooved dry-weather tyres still were known. But in that change he had even more delay, as a wheelnut fell out of the mechanic’s airgun, and this cost him at least another 13sec.

It appeared at least his stablemate would deny Schumacher victory though, but that matter also pivoted on a round of pitstops, the second and final one. Schumacher pitted first; Fisichella a lap later. 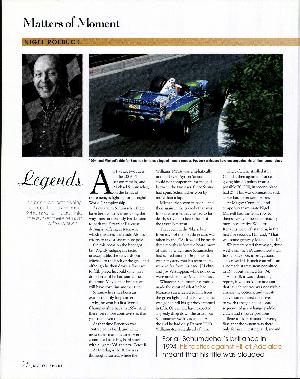 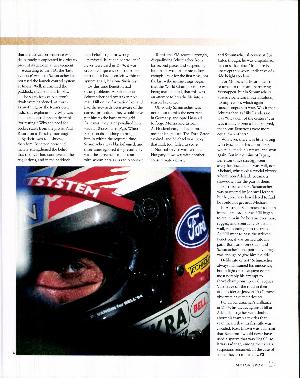 As I write, two races in the 2006 F1 season remain, and Michael Schumacher, on the brink of retirement, is fighting for his eighth World Championship. As ever with Schumacher…

Fisichella emerged apparently comfortably ahead, but immediately at Turn One ran wide where it was still damp. Schumacher was through to the lead in a blink. Fisichella’s chin then dropped.

But Alonso, just like Schumacher, was not giving up in the face of disadvantage. From being 24sec off Schumacher when the latter emerged from his final stop with 15 laps to go, he started to tear often second or more a lap out of the gap. Adding to the drama, a little more rain fell late on.

Yet Schumacher was unflinching. He likely was still in control and letting the gap fall as much as he dared. By the end he was still 3.1sec clear.

And, even better for Schumacher, as a result of his win, he for the first time that year nosed ahead in the championship table with just two races left – the pair were tied on 116 points but Schumacher was ahead on countback. 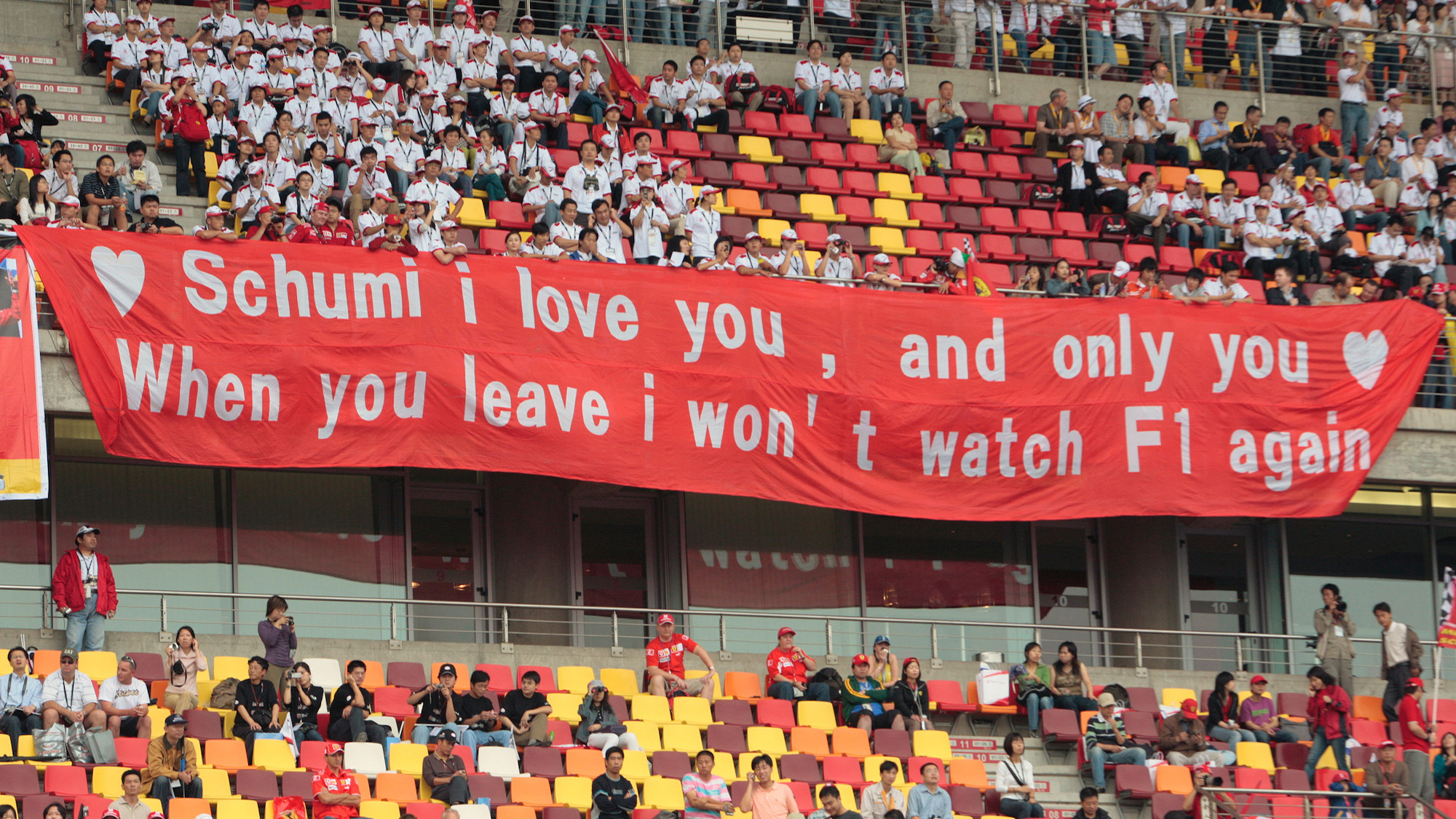 Fans used the 2006 race to send their farewells to Schumacher

A send-off title – Schumacher had confirmed his forthcoming retirement at the previous round at Monza – looked probable.

While Alonso, in a way that wasn’t usual for him then, struck out in a number of directions. This included at his own team, particularly that Fisichella was allowed to pass him when he was struggling. He declared that “on some occasions I have felt a little alone.”

His switch in luck wasn’t far away though. A late-race engine failure for Schumacher in the subsequent Suzuka round tilted the championship decisively back in Alonso’s favour. 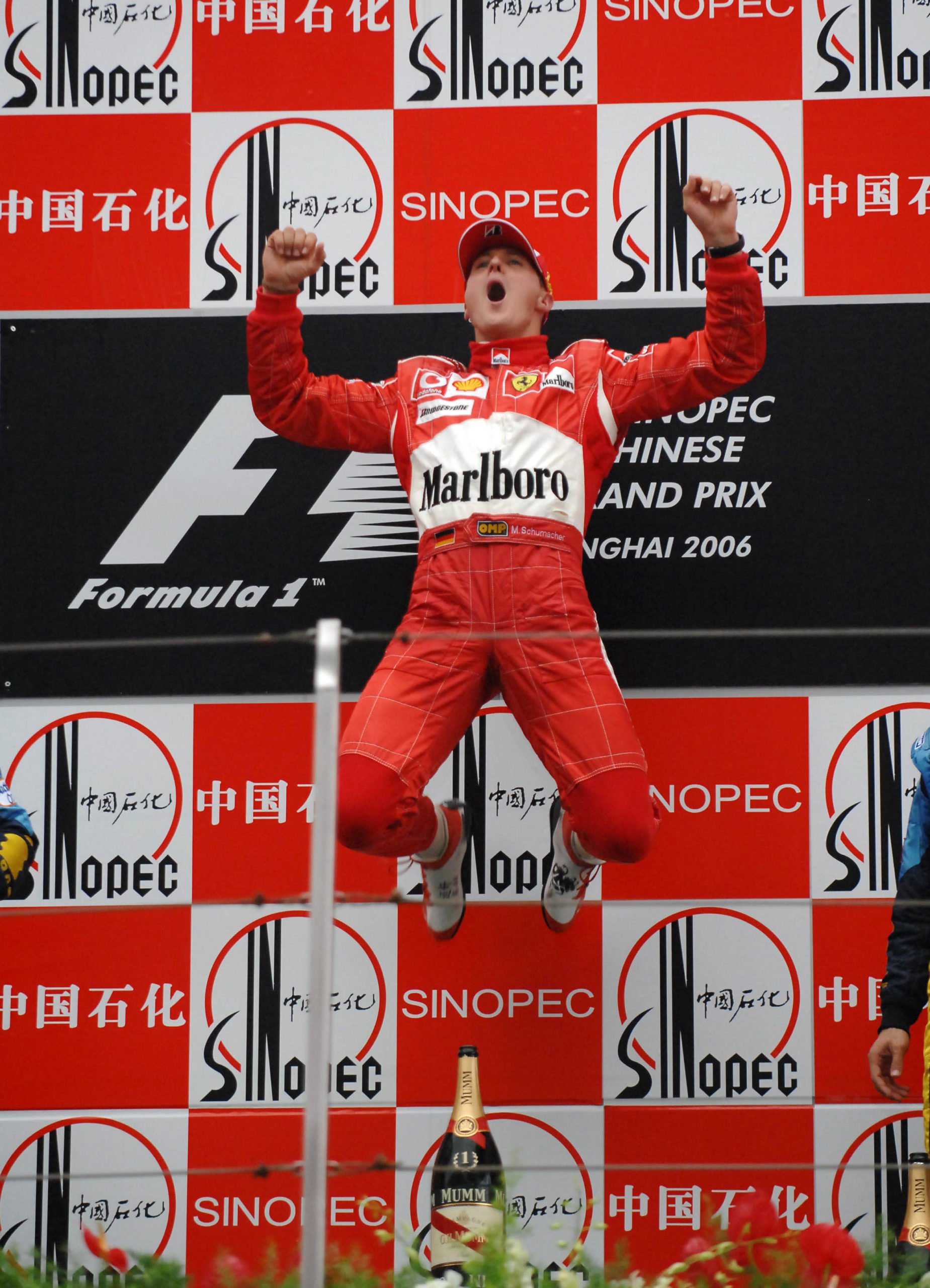 A final victory leap for Schumacher in Shanghai