The guests of honour at this weekend’s Rolex Monterey Motorsports Reunion at Laguna Seca are Sir Stirling Moss and Dan Gurney. The irrepressible Moss will make his return to US competition driving his own Porsche RS-61 following last spring’s terrible elevator accident, while Gurney and a fleet of All-American Racer’s Eagles – from F1 to Indycars, Can-Am and IMSA GTP cars – will be celebrated in a private reception at the track on Saturday evening. 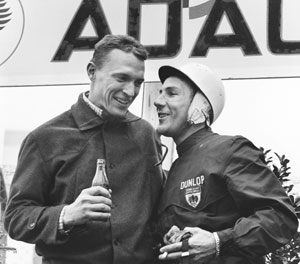 Without doubt Moss and Gurney number among the greatest drivers from the 1950s-60s. They were team-mates in Lucky Casner’s Camoradi ‘birdcage’ Maserati in 1960, scoring a classic victory in miserably wet conditions in the Nürburgring 1000Kms. But Stirling and Dan were also fierce competitors in F1, long-distance sports cars and American sports car racing. Moss introduced the Lotus 19 to North America by winning the inaugural professional race at Mosport in June ’61, and that autumn Dan gave Frank Arciero’s Lotus 19 its debut and battled with Stirling in the sports car races at Riverside and Laguna Seca. 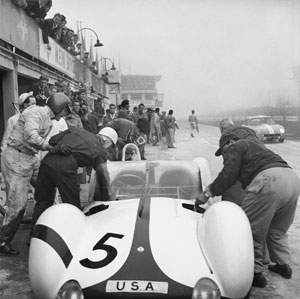 Of course, Stirling’s career was cut short by his crash at Goodwood in 1962, but at that time Dan was beginning to expand his horizons to become a team owner and innovator of the first order. It began when Dan shoehorned a Ford V8 into his Lotus 19, marking of the start of the Anglo-American chassis/engine combination that blossomed into Group 7 in Europe and triggered the creation in 1966 of the legendary Can-Am series.

At the time Gurney was hatching the first of his remarkable line of Eagle F1 and Indycars. The 1967 Eagle-Weslake V12 is reckoned by many to be one of the most beautiful and effective F1 cars of all time, and the 1972 Eagle-turbo Offy dominated Indycar racing through the early ’70s. In Jerry Grant and Bobby Unser’s hands the Eagle became the first car to lap a closed circuit at over 200mph.

Two of Dan’s proudest creations were the 1981 Eagle-Chevy Indycar and the Eagle Toyota GTP car from 1992-93. The ‘81 Eagle was designed by Trevor Harris and was a ground-effect car of a different colour, creating its downforce in a manner unlike the Lotus 79 and its followers. Harris and Gurney called the system ‘Boundary Layer Adhesion Technology’, and the different-looking car proved very quick, with Mike Mosley scoring a famous victory from the back of the grid at Milwaukee in ‘81 and Geoff Brabham running away from the field at Riverside until the car suffered a transmission failure.

The other thing about the ‘81 Eagle is that it was powered by an all-aluminium Chevy V8 built and developed at AAR’s shop in California. It was a classic case of Gurney pursuing his own path against the dominant turbo Cosworths of the day and a true expression of his American hot-rodder’s heart. Fans loved the car and engine, but over the next few years CART’s team owners, in their wisdom, decided to restrict and effectively eliminate both car and engine from the rulebook. Silly boys… 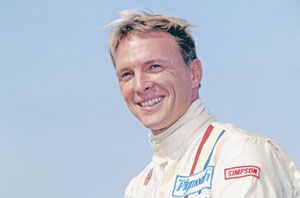 In closing, I have to add that I rate Dan as America’s greatest racing man. Why? Because he won in everything he raced – F1, Indycars, Can-Am, long-distance sports cars and NASCAR – and also enjoyed a rare second act as one of the sport’s most accomplished and innovative team owners and car builders. On Saturday evening, wherever you may be, raise a glass to toast Moss and Gurney for their many achievements as both racers and gentlemen.