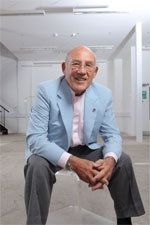 It’s not every day that you come to work and find Sir Stirling Moss sitting in your chair. But that was my pleasure – and real honour – when Britain’s greatest racing driver joined Motor Sport as guest editor of the October issue.

Stirling will celebrate his 80th birthday on September 17, a landmark worthy of recognition – even if the man himself doesn’t like to make a fuss. We’re not the only ones who feel differently, but we are the only ones Stirling was happy to work for ahead of the big day! “I’m curious to find out exactly what these editors do,” he quipped when he walked in the door. As he found out, much of the day revolved around coffee, biscuits – and a bit of chat about his favourite subject.

While Stirling was with us, we took the opportunity to put the finishing touches to a bumper package of special features, all of which you’ll find in ‘his’ issue. Nigel Roebuck discussed ideas for Stirling’s editorial column (another thing I didn’t have to do this month!), and then we quizzed him on the drivers, cars and circuits of his era.

This proved very worthwhile. We simply drew up a list of names at random, fired them at him and recorded his instant responses – kind of like a game of word association. It was fascinating to see clearly how Stirling’s racing driver brain had, many years ago, automatically judged his rivals into compartments: the ones he had to worry about… and the ones he didn’t.

Other stories include Gordon Cruickshank’s revealing interview with Ken Gregory, the man who managed Moss’s racing career; Simon Taylor on Moss’s life after his Goodwood accident in 1962; an extract from Alan Henry’s forthcoming book, which documents every race Stirling did between 1948-62; and a short piece on a new chapter that has opened up in Stirling’s life, concerning a very special little red racing car… And I don’t mean his Osca.

Aside from the Moss-related features, you’ll find plenty of the usual diverse mix. Simon lunched this month with Julian Bailey – not by any means the most successful driver of his era, but certainly one of the most frank. We also visit Pikes Peak and revisit one of the most sophisticated Grand Prix cars in history, the Williams FW14B.

Meanwhile, I look forward to seeing many of you at the Goodwood Revival, which Motor Sport is sponsoring this year. Lord March and Co will be celebrating a certain gentleman’s birthday, too.

You might have already noticed that there are four different covers for the special Moss October issue. How to sum up the great man with one image – that was our problem. So we chose four different shots that reflect different aspects of Stirling: action photos in a Maserati 250F, a Mercedes W196, an Aston Martin DBR1 and a shot of Moss in profile. If you’d like the full collection of four covers, visit our online shop for some special price offers from Friday August 28 onwards.

Watch the video of Stirling’s day in the office here!