All of the recent Fomula 1 talk has been about strategy; who was right, who was wrong, and how. A good time, then, for Sega to announce the launch of Motorsport Manager, a new computer game that will put you in charge of your own racing team.

Sport manager and strategy games have long been reserved for football, but a team of enthusiastic developers is putting this right, with the added help of gaming supergiant Sega. It has grown rapidly from small beginnings barely two years ago – Bookkeeping for Dummies acting as coaster on a side table is testament to that.

The brainchild of games developer Christian West, Motorsport Manager began as a side project while he worked on major games as part of his day job. That side project became a strategy game for motor sport fans to play on their mobile, developed in his bedroom, that was soon topping the charts.

“I was always playing Football Manager but wanted to play something like our game – a real strategy game where you’d see drivers making mistakes into corners, and you’re making decisions about staying out in the wet on dry tyres or pitting.” 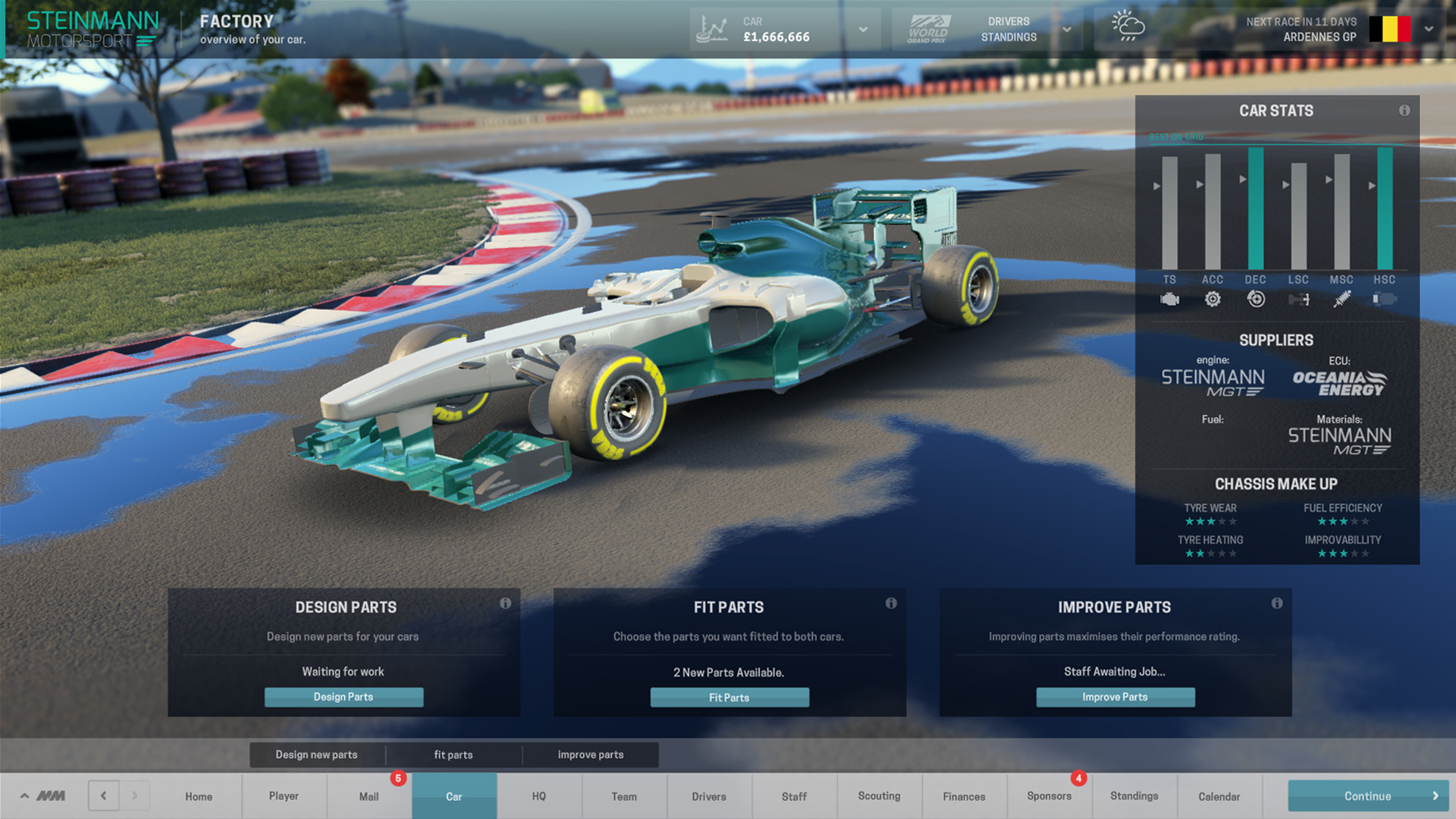 It’s been done before in the shape of Grand Prix Manager in the mid-90s on Windows but little else since.

“We played it but the world of computer games has moved on quite a lot so it’s been a long time coming. In a way this is a brand-new experience for people. We’ve all sat and watched on TV and wanted to make those decisions.”

Sega’s involvement came about almost by chance: a Tweet from the man behind the wildly popular Football Manager, Miles Jacobson, effectively put them in touch. Things rapidly moved forwards to where it currently stands, with a studio of 12 people having started from just three.

“They saw that it was a totally committed team here and backed us,” West says. “They love sport strategy games, and you can see their influence within the game. It’s gone far beyond where I expected it to – a couple of years ago I was working on this mobile game in my bedroom, dreaming it would become a PC game.”

Despite Sega’s new impetus, it has an independent feel. Hand-picked, all racing fans, the team’s enthusiasm is obvious from the off. “You see their passion for it come through in the game,”  insists Ward. “The level of detail on the tracks is pushed that bit further. They surprise me every time with the things they just add in like the flags waving in the stands, the people camping around the circuits.”

On playing Motorsport Manager, the player is thrust into their own garagista world. Parts need to be developed, as does the HQ, which then neatly affects the parts you develop. Then, once you’ve signed your driver and set up your car, it comes to the racing and you’re in total control from the pitwall. The drivers feed back to you, with no hint of the real-world radio ban. It’s easy to get immersed – and to blow an engine while ensuring you uphold Motor Sport‘s honour with a race win. You can choose your own back story, too, and incur the cold shoulder of your new team by choosing an “International Motorsport Association politico” (read FIA) background.

It’s realistic, or as good as this really can be, having called on Ward’s aerodynamicist room mate for car development and design. Meetings with those involved in the dark arts of driver deals, sponsorship and drives have ensured that side of the game is as close to life as possible.

Licensing restrictions mean you won’t be signing Fernando Alonso to Manor and winning a glorious title, and you won’t be winning the Formula 1 World Championship, either. Grand Prix Championship will have to do. You learn your trade in the official IMA-sanctioned feeder series as part of career mode, too.

Design director Rob Pearson believes the lack of licence has in fact been a good thing, rather than bad. “It has freed us up to have a bit more fun with the game. We’re inspired by reality though, like drivers becoming pop stars or having bust-ups… They all have their own characters, some are driven by success and want titles while some just want to make their money.

“We have created our own world that is authentic to itself, so similarly if you saw a famous name from 50 years ago it would then take you out of it and not allow us that.”

Not using drivers from the past leaves a can of worms unopened, no offending of legacies, no tarnishing of fans’ heroes.

And talented sons? They’re factored in too.

The ability to tweak and edit the game behind the scenes is built in, and presumably going to be used by many to get around the licensing restrictions. The hints are there as to who is who, though; an Aussie and Russian together in a purple car (Dutch by launch, maybe?), a Brit and German in Silver. Still, it’s more subtle than the David Beecham of old unlicensed football games. 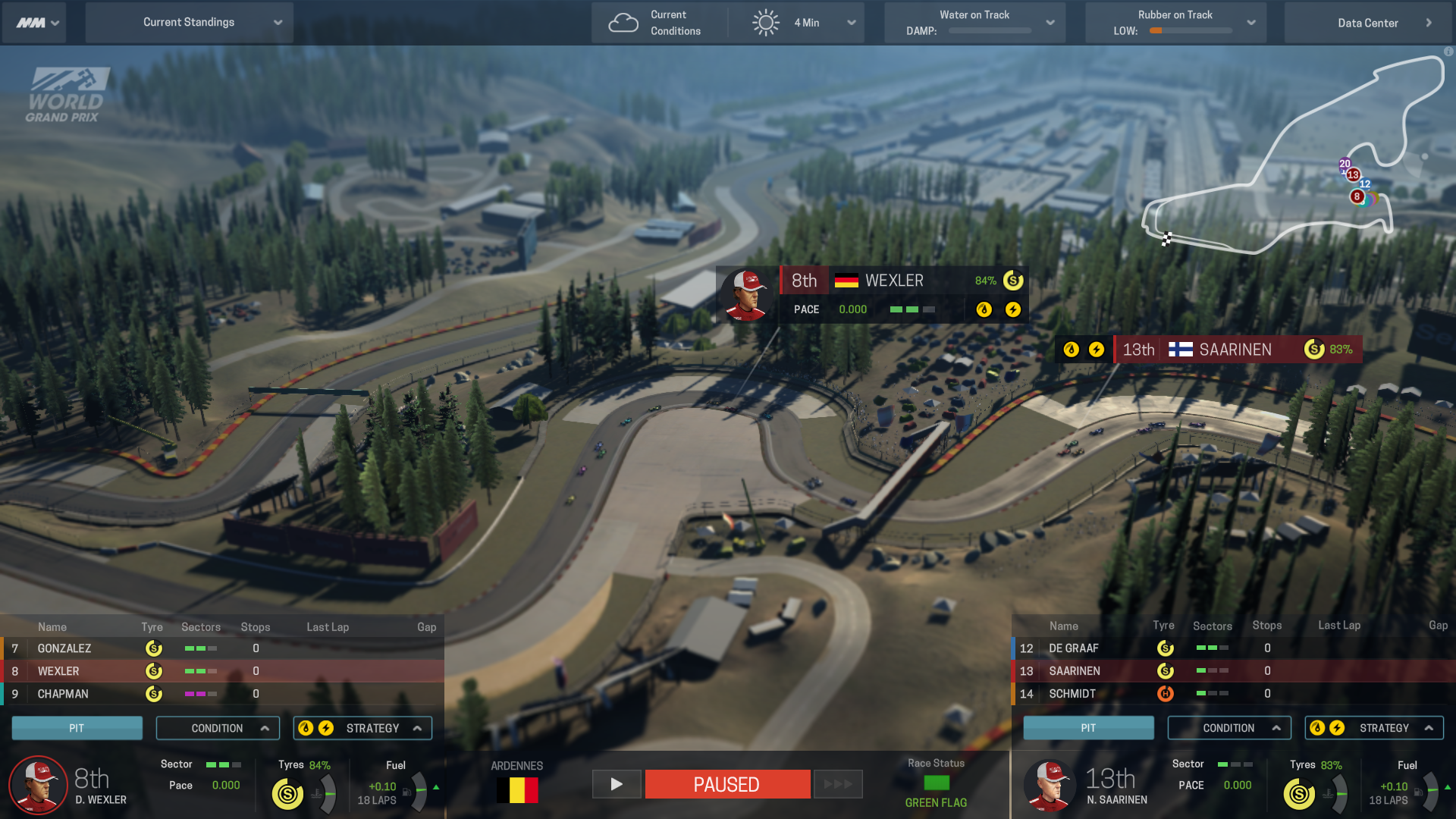 The self-made tracks have their not-too-inconspicuous influences in Bernie’s growing calendar: Ardennes needs no introduction, especially. Sam White, co-founder and art director explains: “Rob draws out the circuit and gives it to the artists. They then bring it to life with these diorama. You can sit there and watch a race and be really taken aback by it. There is a world around the circuit, like at Cape Town you see where the bus lanes are cut off by barriers; it feels like a proper street circuit.”

This expansive 3D world is the biggest benefit of the move from mobiles to PC, but with big worlds comes big strain on machines. Sega insist that’s something that will not affect most, though specs are to come nearer the Autumn launch date.

With a few months to go, now is the time for the small additions like sparks when your car is set-up too low, and smoke billowing from the exhaust when the engine finally gives up. But, as White points out, “it is heads down and work hard on this release, but it is called Motorsport Manager, so we have areas to work on in the future…”