For 60 of the 87 laps George Russell was going to win as Lewis Hamilton’s stand-in at Mercedes. But fate had other plans. A safety car to retrieve the front wing of Russell’s own stand-in at Williams, Jack Aitken, triggered a disastrous sequence of events in the Mercedes garages which saw two of the wrong tyres mounted to Russell’s car as he pitted. Front tyres allocated to Valtteri Bottas’ car were mistakenly mounted onto Russell’s who had to be pitted again to correct the error to avoid disqualification. Bottas had to be sent back out on his old tyres.

Russell fought back and in his recovery drive was able to put himself in position to win the race all over again, chasing down leader Sergio Perez after an audacious pass on Bottas. But a puncture picked up on debris – believed to be from that Williams front wing – brought Russell into the pits for a fourth time, ensuring Perez took his maiden grand prix victory in his penultimate race for the Racing Point team. Esteban Ocon took second for Renault ahead of Lance Stroll in the other Racing Point. Bottas and Russell were eighth and ninth respectively, with Russell picking up the extra point for fastest lap.

This night time race around the perimeter track of the Sakhir circuit, with its sub one-minute laps, certainly delivered on the drama and confusion that its format had suggested. Here are the factors that were set to give Russell a sensational victory and those which denied him. 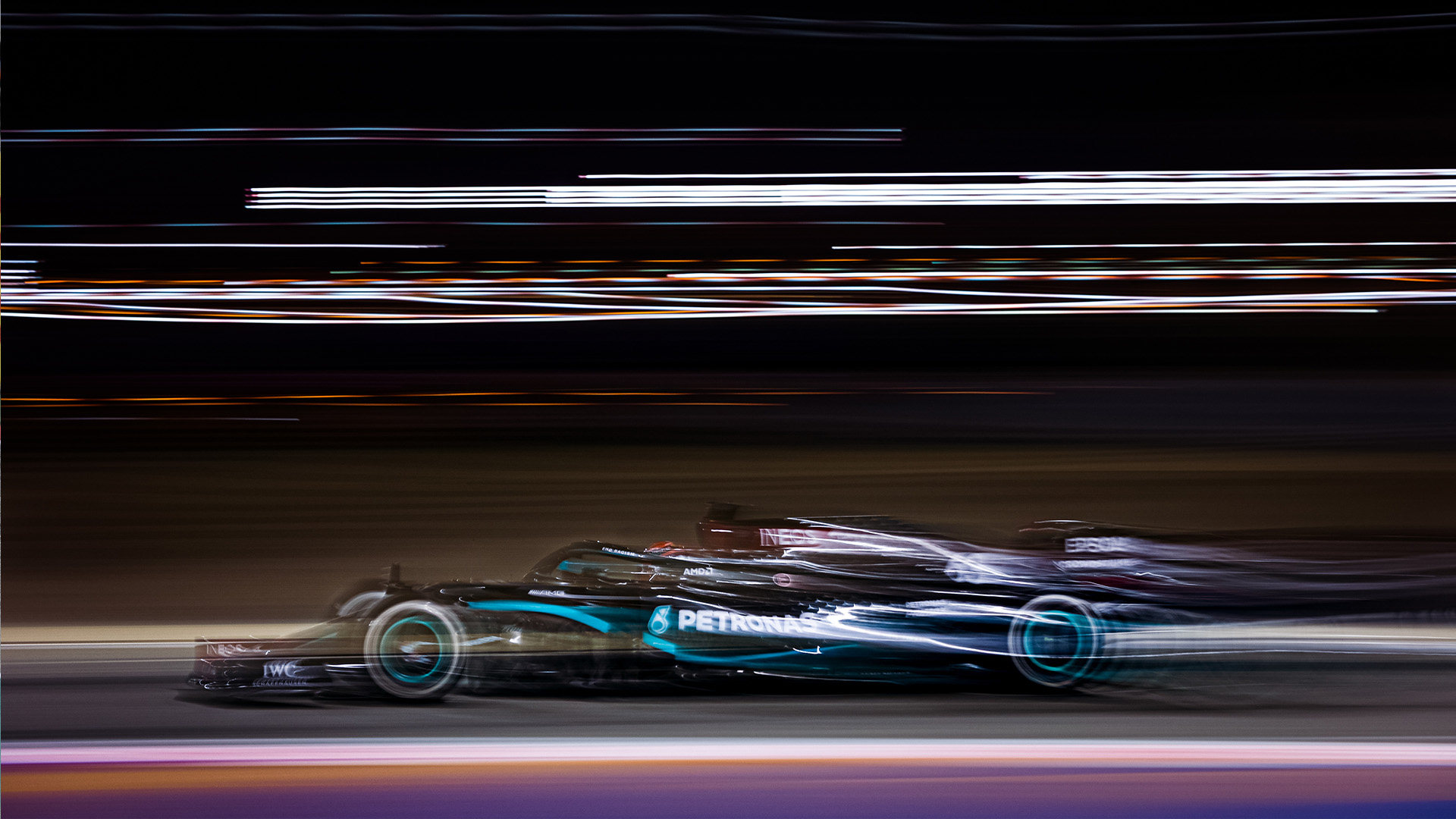 From the moment he climbed into the car on Friday and went fastest in both practice sessions, Russell served notice that he was going to be more than a safe pair of hands. “I came here with the internal target of getting within a couple of tenths of Valtteri,” he said. He did rather better than that. Bottas did manage to secure pole position, but by a scant 0.026sec from Russell. It put him in place to fight for the win right from the start, with team boss Toto Wolff having confirmed the pair would be free to race each other.
The track was super-slippery at the start of the race from several hours-worth of sand blown onto its surface by a gusty wind. Which overcame the disadvantage of the ‘dirty’ side of the grid on which Russell was starting. After initially getting away ok, Bottas suffered a sudden spike of wheelspin. “It came just on the change from first to second gear,” he explained, “and that really downgraded the change to second.” It gave Russell the advantage, and into the lead.

Perez, after his spin, was now on a better strategy than he would otherwise have been

That slippery surface then caught out Bottas again as he suffered a big oversteery moment under power on the exit of Turn Two, losing him further momentum and causing him to be under attack from Max Verstappen’s Red Bull and Perez up to Turn Four.

Verstappen surrendered early on the move, which tempted the closely-following Charles Leclerc into trying for a pass down the inside. But on the slippery surface he couldn’t get the Ferrari slowed in time to avoid hitting Perez into a spin. The hit broke Leclerc’s front left suspension, putting him out on the spot. In trying to stay out wide to avoid the accident, Verstappen got onto the most gripless part of the track and couldn’t get the Red Bull turned in. Trying to power out of the understeer that was taking him off the track just ensured he arrived at the barriers even quicker. Both cars were out on the spot as a safety car was deployed. Perez used the safety car period to get off his flat-spotted soft-tyres, rejoining at the back on a set of tougher mediums. It was a move that would win him the race. 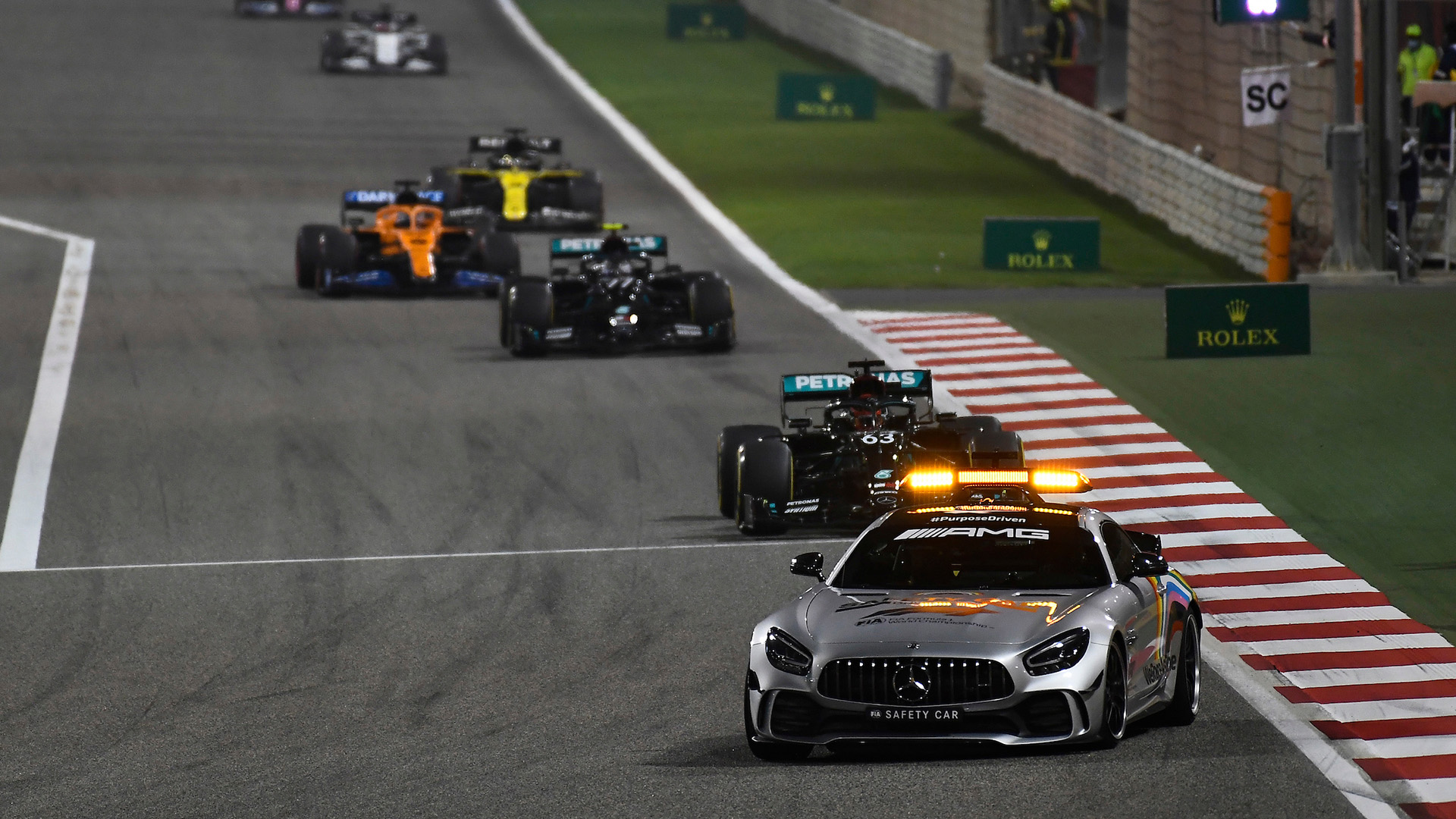 Russell was at the front of the queue behind the safety car. Perez was at the back

Russell led Bottas in the queue behind the safety car and maintained his lead upon the restart a few laps later.

Verstappen – who had qualified within milliseconds of the Mercs – had been one of the two biggest threats to a Russell victory and was out of the race. The other threat, Bottas, was behind and seemingly unable to do anything about Russell who soon built up a gap of around 2sec, with the track grip quickly building as 18 cars ran on it.

The medium tyres on which the Mercedes had been able to start would give the range required to do a one-stop race. The softs on which the rest of the top 10 were obliged to start – having not been quick enough to get through Q2 on mediums – essentially enforced a slower two-stop race. Perez, in changing onto the mediums after his spin, was now on a better strategy than he would otherwise have been and he quickly picked off the slower Alfa/Haas/Williams cars to be running with Ocon and Alex Albon not far behind the train of soft-tyred top-10 qualifiers. Perez passed Albon, got behind Ocon and waited.

Carlos Sainz’s McLaren led the soft-tyred bunch who would all be leapfrogged by the longer-running Ocon and Perez after their stops. One exception was Stroll, who got his softs to last long enough to one-stop and thereby join Ocon and Perez in the fight for what was going to be third. This fight was decided by Stroll locking up into Turn Four, allowing Perez to pounce and a lap thereafter put a DRS pass on Ocon at the same place. 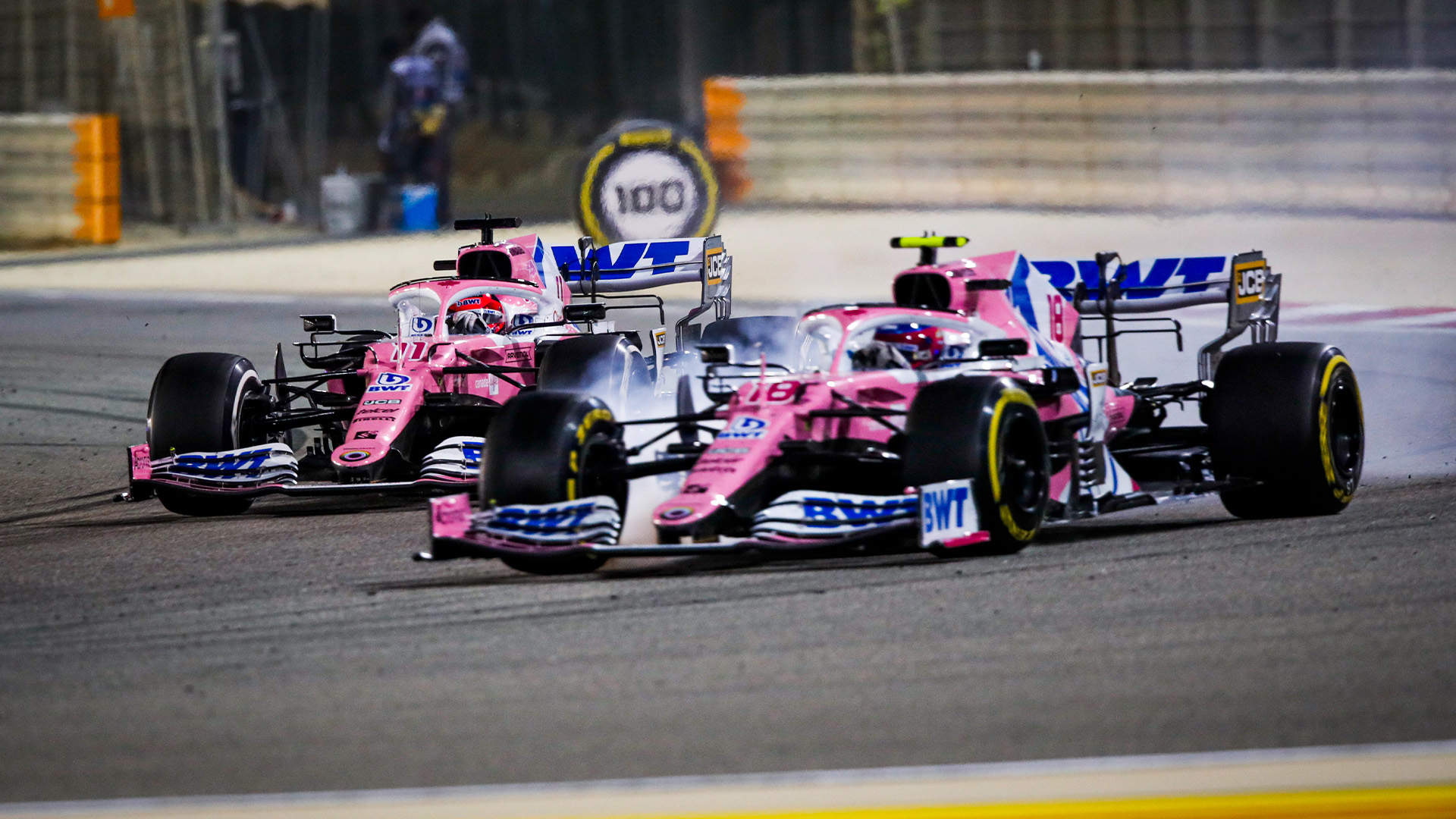 Lock-up by Stroll allowed Perez past

A long way ahead of that fight, all was routine at Mercedes. The plan was to one-stop, the second driver (in this case Bottas) would be free to offset, to run longer after the first car stopped in an effort at getting a tyre advantage in the second stint. Russell was brought in on the 45th of the 87 laps. Bottas stayed out for an extra four laps and emerged 8sec behind. With both cars now on hard compound tyres and set to run to the end, Bottas was hoping he’d be able to apply pressure to Russell in the late stages. Russell looked well up to the task of staying in front.

It all began to go wrong as Aitken, making his grand prix debut as Russell’s stand-in at Williams, was pushing hard to catch the Haas of Kevin Magnussen on lap 60 when he lost control at the final corner and spun. The front wing was knocked off and deposited on the track and Aitken made his way across to the pitlane for a replacement.

The safety car was deployed to enable marshals to retrieve the wing and sweep the track.

“We missed a key bit of the radio broadcast: half of the tyre collectors didn’t get the message”

Mercedes, with its half-minute lead over Perez in third about to be wiped out, did not want to be vulnerable on old, hard tyres at the restart – and told both drivers to pit, with Bottas stacked behind Russell. The plan was to fit both with fresh mediums, ready for the restart.

Mercedes’ Andrew Shovlin explained what happened next as team manager Ron Meadows radioed to the garage crew to ready the replacement tyres.

“The radio system knows to prioritise the messages coming from Ron because the most important thing is the tyres are there, more so than whenever a driver says or whatever someone else in the crew might say but it looks like there is a period whereby the system is deciding to let the prioritised message through, we missed a key bit of the broadcast such that half of the tyre collectors didn’t get the message and it looks like half of them did.” 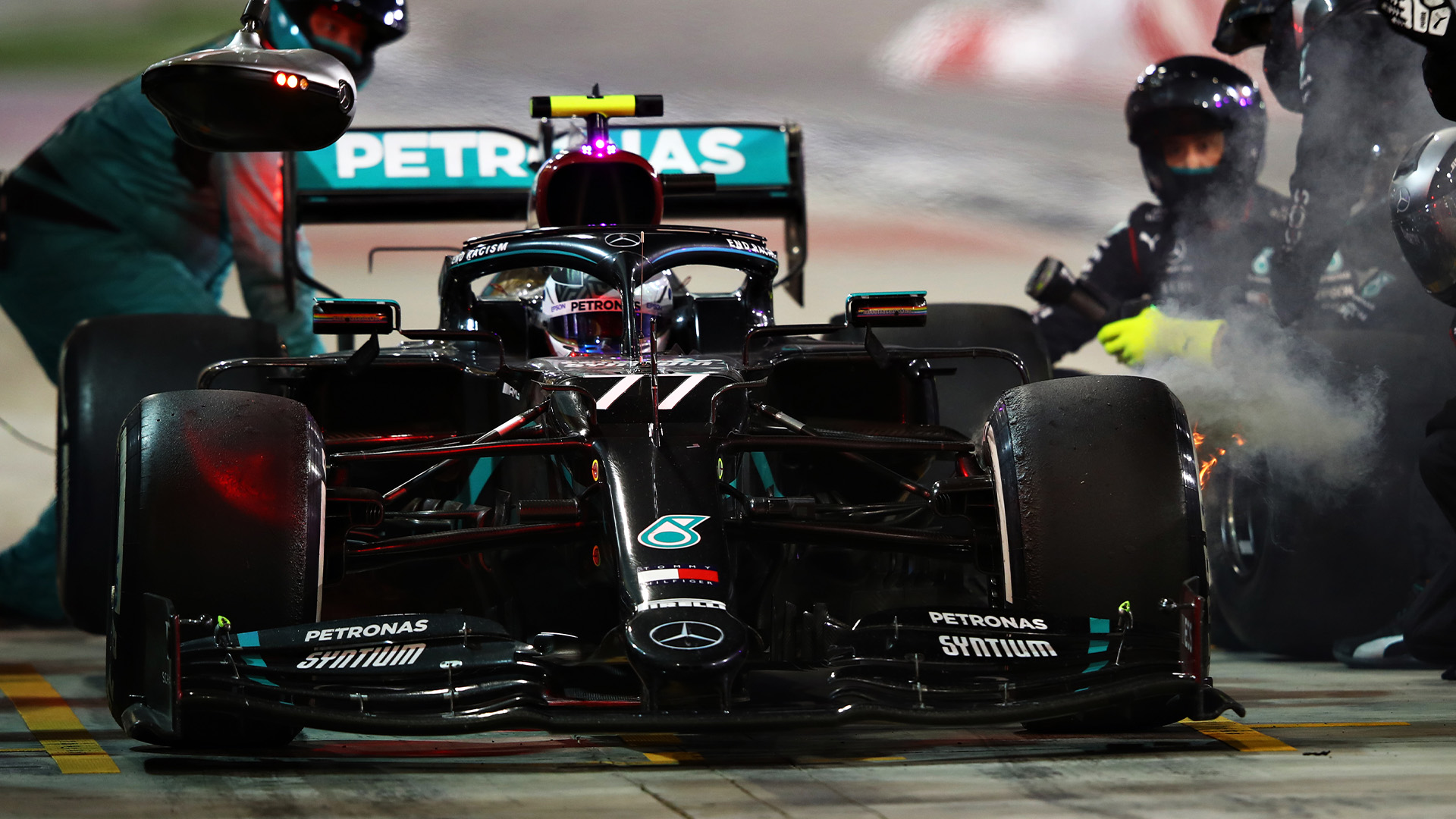 It all went wrong in the pits for Mercedes. Bottas was sent out with his old tyres

As Russell was talking on the radio, it clipped part of Meadows’ message to Russell’s front tyre men who didn’t hear the instruction to ready the tyres. Bottas’ crew had heard, as had Russell’s rear tyre men. So as Russell stopped he was fitted with the front tyres that were there – Bottas’. It was only as Bottas came to be serviced that it was realised what had happened. So the Russell front tyres that had now arrived and which had initially been fitted to Bottas’ car had to be removed – along with the others – and replaced once more by his original old hard tyres. On which he rejoined. 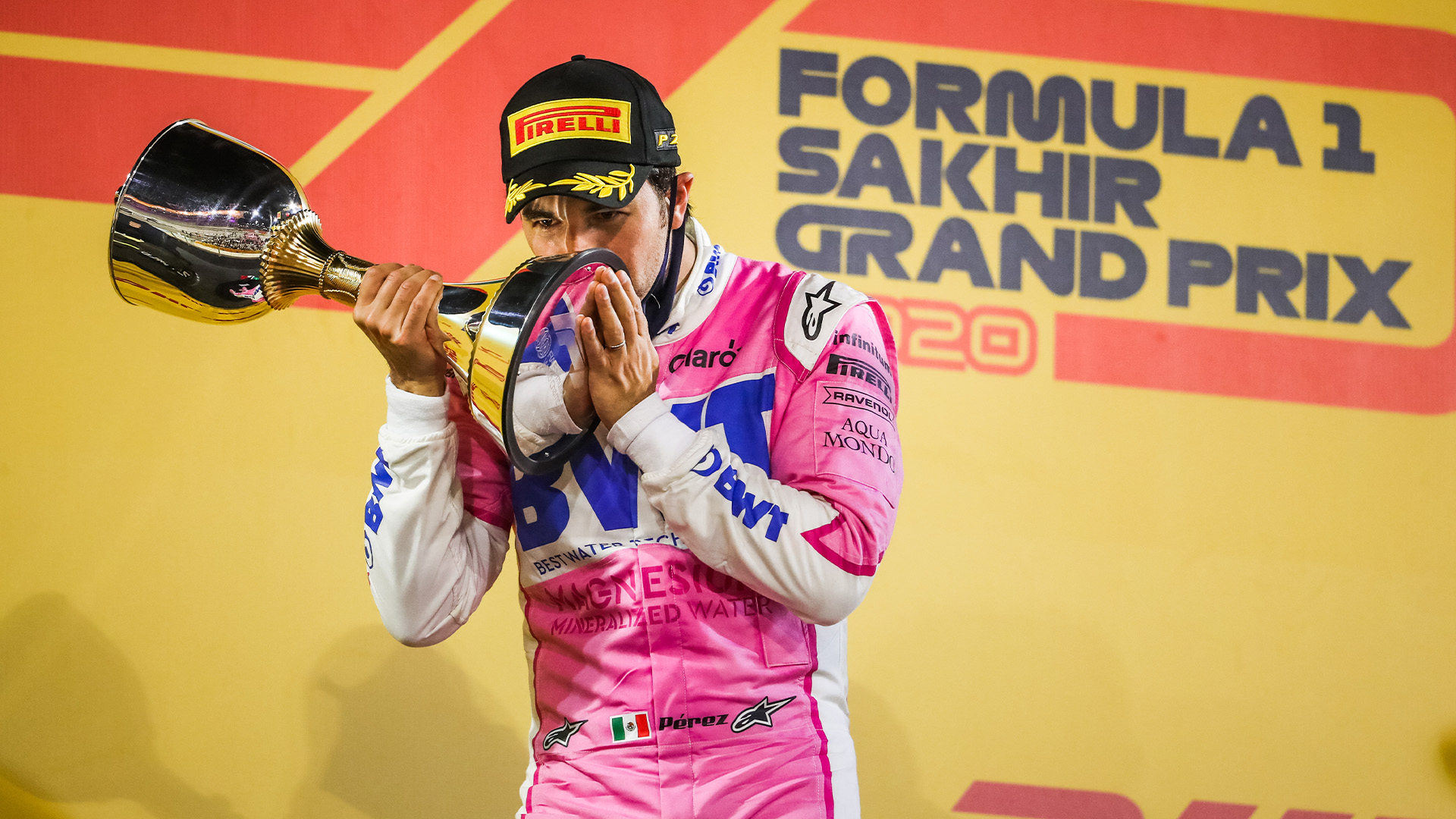 With Hamilton away, Perez has his day: F1 2020 Sakhir Grand Prix report

A Formula 1 race without Lewis Hamilton for the first time since 2006, and therefore without this season’s already-crowned drivers’ champion, but in his absence F1 still delivered something special.…

Russell was brought in again next lap and fitted with the correct tyres. This put him fifth in the safety car queue, directly behind Bottas, with Perez now leading from Ocon and Stroll.

Racing got underway with 18 short laps remaining. Bottas was ‘like sitting duck’ on his old hard tyres once their temperature had dropped. He ran wide into turn four, and Russell pounced with a breathtakingly close move into Turn Five, the two Mercs almost touching side-by-side as Russell got by. He quickly picked off Stroll and Ocon on the next two laps – leaving just Perez, who’d sprinted away impressively upon the restart and was now 3.4sec up the road. Russell began hauling him in and had the gap down to 2.3sec with 10 laps to go when the sensors told of a slowly deflating front right tyre. Russell had picked up debris at the final turn – so almost certainly something from the Aitken wing. He was pitted for a fourth time and the fairytale victory as Hamilton’s stand-in was lost.

But the fairytale win for Perez in his penultimate race for the team which has dropped him unfolded instead.