Alain Prost created a big impression by finishing sixth on his F1 debut in Argentina 1980 in an uncompetitive McLaren, having out-performed his senior team mate John Watson. But it was low key compared to the championship glories that lay ahead.

Prost had always marked himself out as a little different to the other up and coming hot shots of the late 1970s. He applied a calculating intellect to the task which, allied to a fantastic feel and balance for a car and featherweight proportions (at a time when driver weight was not equalised by ballast), brought him great success.

After establishing himself in karting – where he raced against Eddie Cheever and Riccardo Patrese – his path to the top was a typical one for a French driver of the time: winning the Winfield racing school scholarship (in 1975) and subsequently being backed through the junior categories by Elf. Prost won domestic championships in Formula Renault and Super Renault before graduating to the European F3 championship with the French Martini team, using Renault engines (forming a vital future link). In his second F3 season of 1979 he was virtually unbeatable and dominated against such as Michele Alboreto and Piercarlo Ghinzani. Off the back of this, Elf’s Francois Guiter took a personal interest in trying to get Prost a break in F1.

Guiter took the young driver to a few late-season grands prix in 1979, introducing him to Guy Ligier, patron of the Ligier team that was very competitive at the time. Guiter had also pleaded Prost’s case to John Hogan, who looked after Marlboro’s sponsorship of the McLaren team. After Prost had won the Monaco Grand Prix supporting F3 race there, Hogan was particularly receptive to the case Guiter was making.

In the second half of the ’79 season, Ligier’s second car was being driven by the veteran Jacky Ickx as a stand-in for Patrick Depailler, who had injured his legs in a hang-gliding accident shortly after winning the Spanish Grand Prix. Ickx was not acclimatising well to the demands of the ground effect cars and had been a long way off the pace of team mate Jacques Laffite. Ligier was very interested in putting Prost in his car for the last two grands prix of the season – in Montreal and Watkins Glen. But it was at short notice and there was probably going to be no place there for him for the following season, as talks with Didier Pironi were already ongoing.

Anxious that he was going to be under-prepared to be making his F1 debut without a test programme before it and on tracks that were new to him, not wanting to damage his reputation, and bolstered by McLaren’s interest in him, Prost had the confidence to turn down the Ligier offer of the last two races of ‘79. Any other up and coming driver would have jumped at the chance. Prost was different.

As he arrived in Montreal, another possibility came from the blue: Niki Lauda had decided mid practice session that he was retiring from F1 and had left the circuit after informing Brabham team boss Bernie Ecclestone of his decision. So there was a vacant brand new Brabham BT49 needing a driver. Ecclestone spoke with Prost about it, but his reservations still applied in the end nothing came of it. Ecclestone instead opted for another spectating driver, Ricardo Zunino – who at least had some F1 experience from the British Aurora series – as a stand-in.

Prost spent the first few weeks of the off-season waiting for the phone to ring, fearful that he may have missed his only opportunity by turning down the late-season drives. Eventually a call came from McLaren: could he present himself at Paul Ricard for a test? Team boss Teddy Mayer had decided to replace Patrick Tambay who’d had a disappointing couple of seasons there in ’78 and ’79. Mayer was interested in the American Formula Atlantic front-runner Kevin Cogan, while Hogan had suggested it would be the perfect opportunity to also try his preferred option of Prost.

There was a back story to the differing preferences of Mayer and Hogan. After giving Gilles Villeneuve his F1 break at Silverstone 1977, Mayer had decided to sign Tambay for 1978 rather than Villeneuve (who, as a result, went to Ferrari), despite the sensational impact Villeneuve had made at Silverstone. Hogan had very much wanted to retain Villeneuve at McLaren but deferred to Mayer’s decision – then watched as Villeneuve starred at Ferrari and Tambay struggled in the McLaren. This time around, Hogan had decided he’d have a greater say. In the end, the respective performances of Cogan and Prost in the test at Ricard (a track with which Prost was intimately familiar) made those initial preferences irrelevant. Prost was flawless, lapping faster than the target time set by the team’s regular, John Watson, and comfortably eclipsing Cogan. Mayer had a contract ready for Prost’s signature before they even left the circuit.

Prost was finally a bone fide F1 driver, but the team with which he’d be making his debut was going through a tough, transitional, time. It had fallen a long way in the four short years since it had last won the world title with James Hunt. It had not grasped the technical nuances of the new ground effect generation of cars, specifically how vastly stiffer the monocoque needed to be, how much tougher the mechanical components needed to be in their installations, how to get an effective skirt seal beneath the sidepods – and how the cars needed to be longer between engine and suspension to optimise the airflow through the downforce-generating venturis in the sidepods. 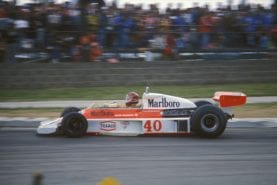 Gilles Villeneuve had barely been heard of on the international stage when McLaren entered him in a third car for the 1977 British Grand Prix. ‘Who?’ was not an uncommon…

The McLaren M29B was an updated version of the car that had been introduced mid-way through ’79 but which was still far behind the cutting edge designs from Williams, Brabham, Renault and Ligier. The 1980 season-opening race was held in the summer heat of a January Argentina weekend around the Buenos Aires circuit number 15, consisting of fast sweeps and severe bumps. But the bumps turned out to be the least of the concerns: the tarmac was being melted by the extreme heat and the tractive forces of the cars were then pulling up the upper surface. The track was repaired several times before race day. These were the tricky conditions in which Prost made his debut – and he starred. His rapport with Mayer, who acted as his race engineer, was terrific as he confidently set up the car to complement his preferred style of driving with no preconceived notions. In qualifying 12th, he lapped a full second quicker than Watson – though it was still 2.5s adrift of Alan Jones’ pole position in the Williams FW07.

As Jones blasted into the lead, Prost made up a couple of places from his grid slot, then made another as Villeneuve had a brief off-track excursion later in the lap. Prost completed the opening lap of his grand prix career in eighth place. Already the circuit was melting and Prost’s calculating brain was evident. “It was obvious there were going to be a lot of incidents,” he recalled in his later biography. “I saw it as an opportunity. My plan was to drive just as quickly but as carefully as I could in the conditions.” Others were more experienced, so he didn’t want to pit his improvisational skills against theirs when so unequipped. He had plenty of raw pace within him, but that was probably not what was going to be the important factor in this race. Consistency was going to be the most appropriate quality – for him, in these circumstances, at least. It was a very similar mindset to that which had led him to turn down those Ligier drives. Instead, he’d back away from the edge – and wait for others to have incidents.

So he was passed on the second lap by Keke Rosberg’s Fittipaldi and Jochen Mass’ Arrows, on the third lap by the recovering Villeneuve and on the fourth by the Lotus of Elio de Angelis. Sticking to his ‘calm and steady’ plan he picked up places as Mario Andretti and Mass both pitted. But by the 10th lap the circuit was thoroughly treacherous in places – and it caught him out. He spun over a kerb, losing places to Patrese and Derek Daly before rejoining. The incident had damaged a skirt on the McLaren, drastically reducing its ground effect grip for the rest of the race. He soldiered on, adapted to the changing track and compromised car and as others ahead of him retired (Carlos Reutemann, Patrese, Villeneuve, Jody Scheckter), he rose up to sixth place and thereby became one of the select group to have scored points on their debut. There was, however, only one classified finisher behind him: Zunino’s Brabham. Jones took the victory, ahead of Nelson Piquet’s Brabham and Rosberg.

Afterwards Prost was disappointed with himself. “If I hadn’t spun, I’d have been at least fourth, maybe even third,” he lamented. He’d have plenty of time to make amends. It was the beginning of a truly brilliant career.