There were all sorts of distracting features to this race, mainly related to the wet track it started on. Max Verstappen’s crash on the formation lap and his mechanics’ heroic repairing of the Red Bull on the grid was the most eye-catching. But the underlying core of the third race of the season around the long-duration Hungaroring turns was how outrageous the Mercedes performance advantage was. Lewis Hamilton and Valtteri Bottas sewed up the front row almost 1sec clear of the second row – which was populated by the pink versions of last year’s Merc. Verstappen in the tricky Red Bull had qualified only seventh. The Ferraris that started from the third row were lapped.

So only Bottas was ever going to stop Hamilton – and he was very much in the mood for taking the fight to him, having qualified only 0.1sec away. But perhaps a little too eager. Hyper-attuned, a distraction in the cockpit triggered him into blowing his start – and Hamilton was gone. Bottas wouldn’t seem him again until the post-race collecting area.

The weather in turn brought Verstappen’s race in his repaired car alive, Max straight up to third and second by the third lap. He and Hamilton were operating at a different level to the others in the race-defining first few laps.

The second row-starting Racing Points should probably have been Merc’s closest rivals, but they didn’t have Verstappen at the wheel.

Verstappen’s brilliant start cleared him of the slower traffic Bottas lost time behind. This ensured that by the time Bottas finally arrived on Max’s tail he didn’t have enough tyre grip left to pass him on track. The resultant second place was a vast over-delivery for a Red Bull in its current state. Unless the team can get to the bottom of its problematical aero very quickly, Mercedes does not have a credible rival. Certainly not Ferrari, the better of which – Sebastian Vettel’s – was a lapped sixth, the other one out of the points

The second row-starting Racing Points should probably have been Merc’s closest rivals, but they didn’t have Verstappen at the wheel. Lance Stroll took a solid fourth, a minute adrift, Sergio Perez a distant seventh.

Taken as read Merc’s massive performance advantage, the critical factors determining the actual shape of this race were: 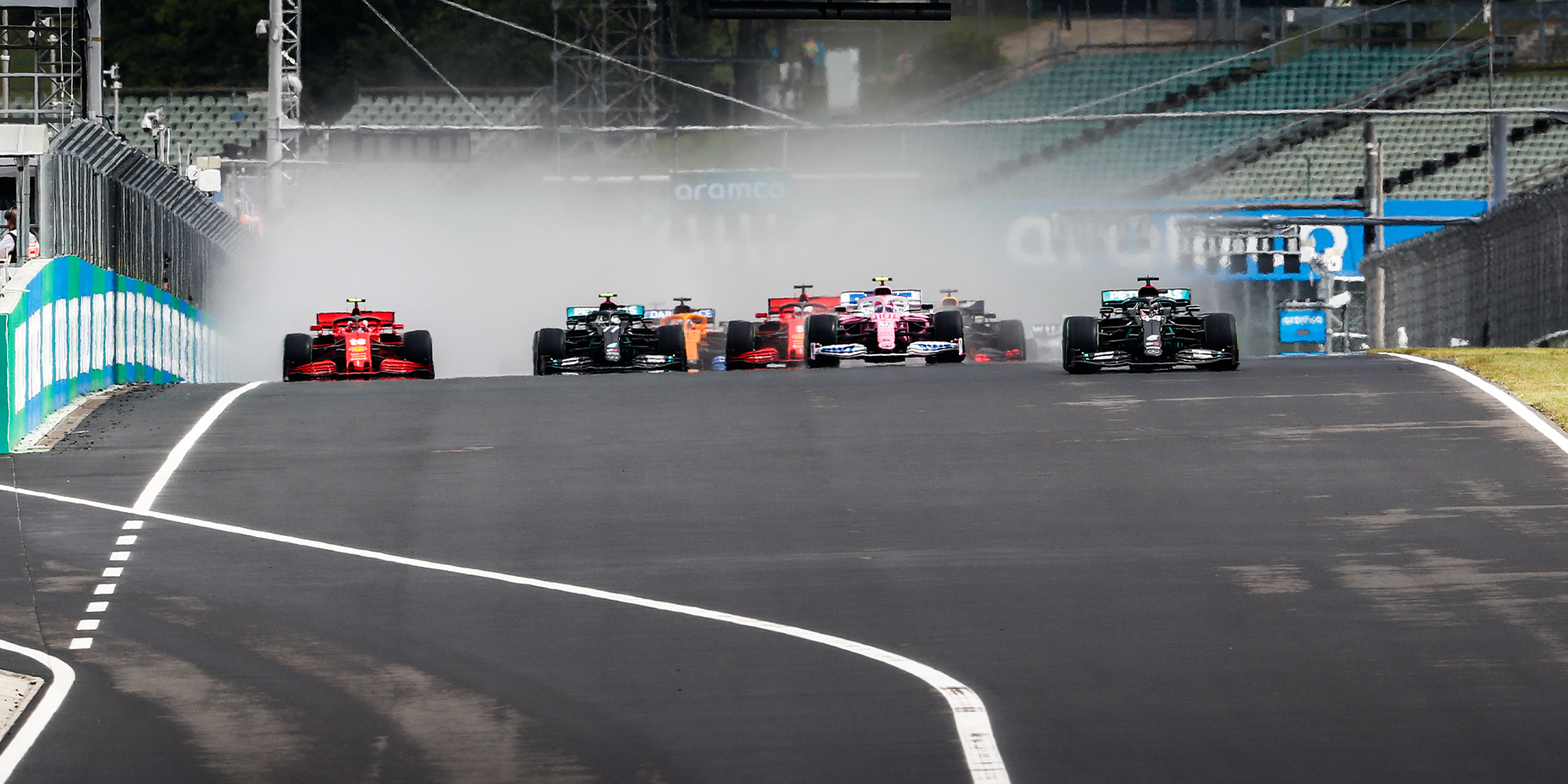 Bottas is swallowed up by the cars behind

As a visual aid to the driver, the Mercedes steering wheel display has a system whereby four lights come on when the engine revs are within the range chosen for the best getaway. The throttles are hyper-sensitive and it’s easy to have the revs set too high or low and this system is designed to help with that. As he was waiting for the gantry lights to go out, craning to get a good view of them over the cockpit halo, Bottas inadvertently allowed the revs to drop below the ideal range, causing the dash lights to go out – something which Bottas caught in his peripheral vision and sub-consciously reacted to by releasing the clutch paddle. He immediately realised his error and pulled the paddle back in. In that brief moment the car moved, but not by enough for the its transponder to trigger the sensor in the grid position. Hence he had not technically jumped the start. As the gantry lights actually did go out a moment later, he was in the wrong part of the rev range and so stuttered away with the engine bogging down. From the front row, he was sixth coming out of the first corner – and Hamilton no longer had any realistic competition. 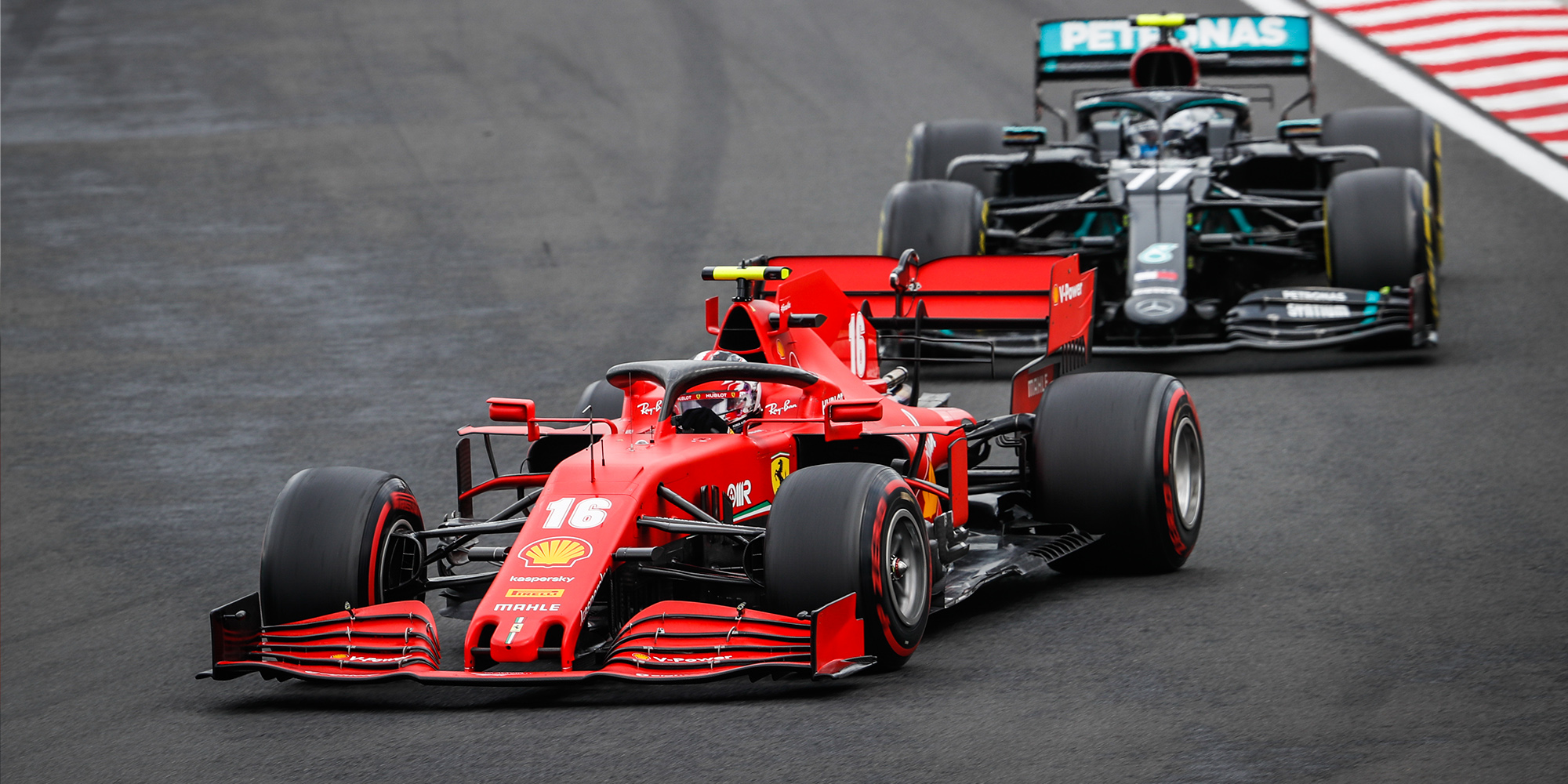 There was the hard rain that began falling about an hour and 40 minutes before the start and which lasted 20 minutes or so. And there was the forecasted shower expected about half-way through the race. The first had almost everyone starting on inters and helped facilitate the brilliant opening few laps of Hamilton and Verstappen. The second skewed the timing of the pit stops – and caused some, notably Ferrari for Charles Leclerc, to choose the problematical soft tyre as they came off the inters just a few laps into the race. The soft gets straight up to temperature better on a cool, damp track – but around here it grained its left front horribly. So Leclerc was in trouble with it almost immediately – and that delayed the following Bottas further. It was lap 10 before the Merc found a way past. Which – combined with the time subsequently lost behind the out-of-position Kevin Magnussen — kept Bottas off Verstappen’s back just long enough. The forecasted shower never did arrive.

This circuit is all about track position. In an inspired decision, Haas brought both its drivers in from near the back of the grid at the end of the formation lap to change straight onto slicks. Magnussen had actually originally opted for wets, but had realised the folly of that as soon as they began that formation lap. Hence the line of thinking which had both him and Romain Grosjean starting from the end of the pitlane on slicks. The discussion over the radio brought K Mag a time penalty as it ran him afoul of driver coaching regs, but the strategy put him and Grosjean an early third and fourth as everyone else pitted in the first four laps on the rapidly drying track.

At 2.47pm at the Hungaroring, Max Verstappen’s Hungarian Grand Prix appeared to be over. And the formation lap was due to start at 3.10pm. Then, thirty seconds before the five-minute…

K Mag’s position as a slower car obviously impacted heavily upon Bottas’ race. Further back, Leclerc’s struggles on the soft in turn kept other faster cars off the back of Magnussen – who finished a great ninth (tenth when the penalty was applied) – for a long time.

Hamilton’s pace advantage over Red Bull gave him the luxury of a pit stop’s-worth of gap over Verstappen from about half-way through the race. This gap was used to facilitate a third stop a few laps before the end to put Hamilton onto a set of the briefly-fast soft tyres, with which he set the race’s fastest lap and then bettered it further on his final time around. The extra point over Bottas may turn out to be crucial later in the year. Because Bottas is surely his only rival.