One of the biggest talking points of an F1 season in which Lewis Hamilton broke the all-time career stat records previously held by Michael Schumacher has been just how big a part the driver plays, relative to the car. It’s a greatly misunderstood concept.

First of all: obviously the car is the dominant factor in deciding who wins a race. There was an average 2.3sec per lap performance spread between the fastest car and the slowest this year (if we assume they were being driven to the same level, but at least 2sec otherwise). This is a fairly typical margin for the last few seasons, actually slightly closer than the last couple. In the same car, how much lap time would there be between the fastest driver and the slowest? We’re into educated guesswork here but let’s say, at maximum, 0.8sec. It’s actually more complex than that, of course, as the answer involves how particular car traits dovetail with particular driving styles and how much could this same car be adapted to the specific skills of each driver. But, in general terms, the car’s contribution to raw performance is something in the order of three times as powerful as the driver’s. Only because the standard of the drivers is so uniformly high.

But what that close spread between fastest and slowest driver does is put the last tenth-two tenths – of driver contribution – at an extremely high premium. Admittedly, in 2020 for Mercedes it turned out those last couple of tenths of driver input would not be particularly valuable, given that its car was round 0.7sec quicker than the next fastest. But in a more closely-matched season – like the previous three, say – it would be exceptionally valuable as it could often be the differentiator of which of two closely-matched cars won.

Which then begs the question of how do we know which, if any, drivers have that vital tenth or so of performance beyond the norm? Definitively, we don’t of course. Not in any scientifically provable way. But we see patterns, little snap-shots of genius. We also can talk to engineers who have worked with dozens of top drivers over the years and who are armed with data gleaned from telemetry, tyre loadings etc who know when they have seen something very special and can differentiate it from just ordinary run-of-the-mill F1-level excellence. You can also sometimes see it with your own eyes trackside. There are only a handful of drivers who ever reach this last two-tenths territory (almost certainly less than half of the current grid). There are even fewer who can produce it on demand. Maybe three, possibly four, of the current grid. 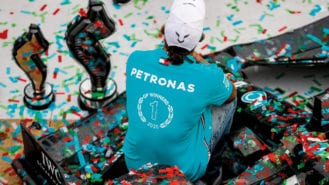 Hamilton: ‘I would win championships and races, and wonder what does it all mean?’

Lewis Hamilton has said the "short-lived" happiness of winning forced him to ask how he would use his success, in a Boxing Day episode of the Today programme that he guest-edited

So already, despite the car being three times as powerful as the driver in general terms, in reality because there is such uniform excellence, those very few who can deliver beyond that are disproportionately important in the equation. Because if you took a random driver in one of the slower cars and placed him in a Mercedes that’s 0.7sec quicker than the next-fastest car, he will of course be competitive. But if he is 0.2sec slower than the guy in the other Mercedes, he’s not going to win very often. So of course it’s about the driver, just as it’s also about the car. Then there’s the question of why has that driver got himself into the top car? Why did that top team want him in there? Because they see the patterns too, spend many hours and some very powerful analysis tools judging such things.

But we’ve discussed only one-lap speed so far. There is also the matter of putting a race together. This is where those not quite so blessed with the freakish one lap speed can use circumstances to bring themselves into contention. The biggest sensitivity in this area is tyre usage – the ability to minimise the energy you are taking from the tyres while still maintaining a competitive pace for a long enough stint to make your strategy work. Daniel Ricciardo is phenomenally good at this – and is close enough to the ultimate in one-lap pace that in combination he is one of the handful that can be the best on any given day. Sergio Perez is similarly good with the tyres but is probably not close enough on ultimate pace to be one of the absolute elite. Valtteri Bottas can occasionally reach super-fast qualifying territory, bit still takes a lot from the rubber. Carlos Sainz has shown signs of being able to put together Ricciardo-like races. Hamilton is a virtuoso at this – and has the searing single lap pace. Max Verstappen has the searing pace and is always on top of the tyres, and though we’ve yet to see any of those ‘miracle’ stints, they are probably within him. Charles Leclerc has the single-lap pace but admits there is still work to do on always getting the tyre part of the equation right. George Russell had been doing some extraordinary things with the Williams in qualifying this year. It is not a Q2 level of car but many times he put it into Q2. And many times the data was suggesting he was doing something beyond the norm. So it was exciting when he got his Mercedes chance in Sakhir. His performance in what was a thermal deg race suggested he was on top of the tyre demands too.

All this puts yet another layer on the importance of the driver – and why not just anyone could achieve the same level of success as Hamilton in Hamilton’s car. Because Hamilton will be in the other one. So to achieve Hamilton levels of success, you’d need to be able to go bat-to-bat with him on single lap pace, have as deep an understanding of the dynamics, be as in tune with the tyres as he is, be able to attack and defend as well as him, be as in tune with his engineering core as him. How many of the other 19 on the grid could do that? I’m guessing there are no more than three contenders, possibly four.

But yes, apart from all those requirements, it’s only about the car.