The occasion of Lewis Hamilton’s record-breaking 92nd grand prix victory was a virtuoso performance in a Mercedes with an advantage that was exaggerated by Red Bull’s wrong tyre choice. Ironically, Mercedes’ choice of the medium tyres for the opening stint initially disguised that advantage as they took around four laps to reach full working temperature. The tyre equation was quite complex in the first grand prix at the Portimao circuit but it was Hamilton who best solved that equation – both with a set up that worked the rear rather harder than normal and with an understanding of how to cope with the effects of a cool, damp track and a gusty, variable wind. Having lost out on the first lap to both team-mate Valtteri Bottas and Carlos Sainz (the latter in a McLaren which got its tyres up to temperature better than any other), Hamilton reasserted himself in a phenomenal performance to win by 25sec. This was like an old-fashioned dominant drubbing, not the typical modern GP controlled pace.

In fact so many facets of this race were untypical. The cars could overtake, for one. For another, they could be pushed hard. In fact they HAD to be pushed hard – or the tyres would lose temperature. This is what happens when the tyres are unable to generate excessive heat, when the track surface isn’t grippy enough to allow them to do that. It means they don’t get way too hot when you get up close to the car in front, so cars can follow closely onto the straight and have at least a chance of overtaking.

There was also a big difference in the behaviour of the two main compounds – and a big diversity of choice in the teams’ estimates of which would be better. Hence a very mixed up performance order in the early stages of the race.

What were the factors which made it like this? 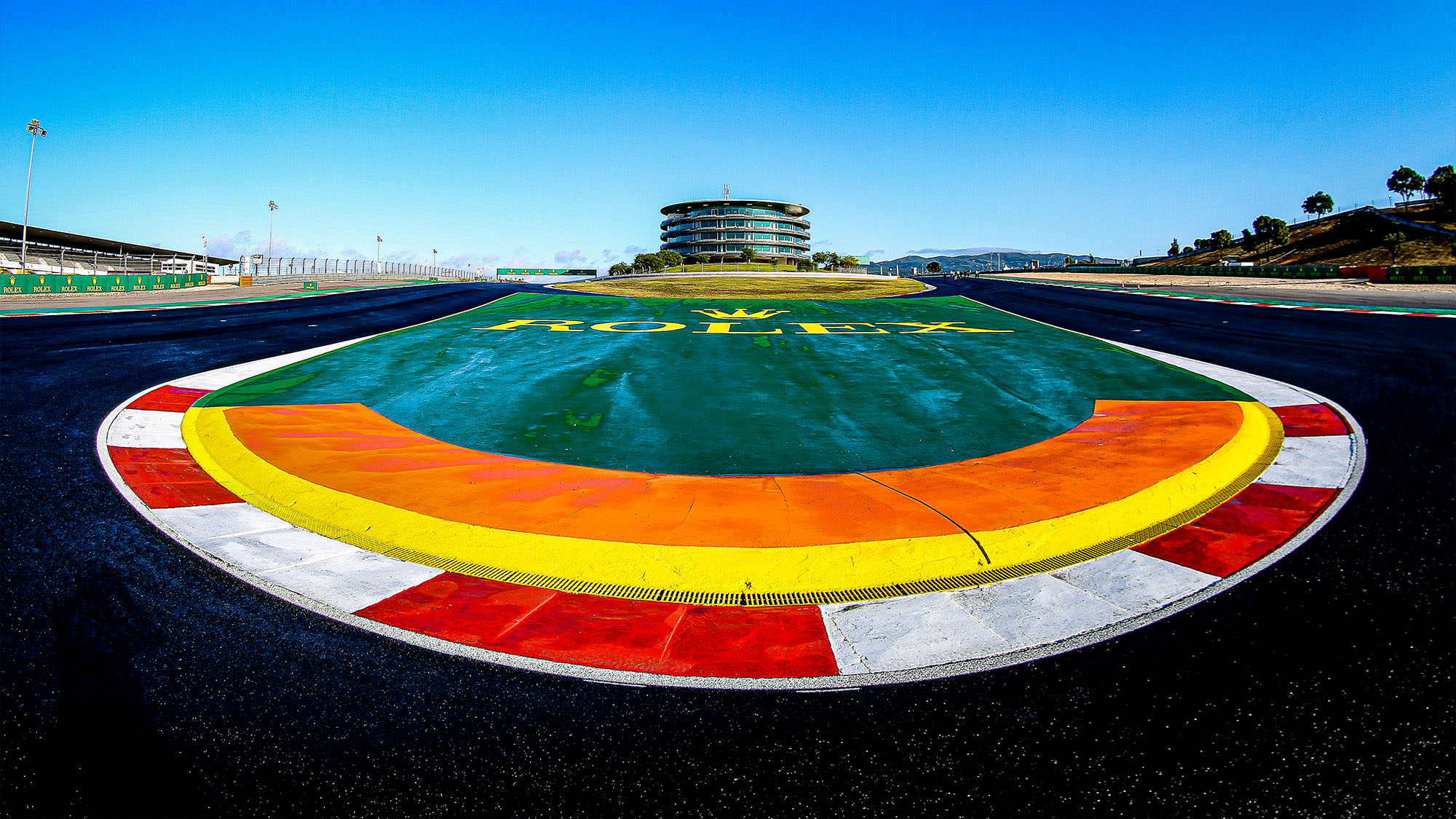 Obviously, the track wouldn’t have been on the calendar but for the pandemic. But even if it had been, it wouldn’t have been scheduled as a European race so late into the year when chances are it’s going to be colder. It also wouldn’t have been resurfaced at such late notice that the oils and tarmac smells were still rising up from it as F1 arrived here. That ensured the fine-textured tarmac was not about to interact with the tyres in any meaningful chemically bonding way. The elastomers wouldn’t be getting stretched out very far and the tyres would remain pretty frigid. “It was like driving on ice,” said Sebastian Vettel. This was as true of Sunday as it had been of Friday. There was virtually no track evolution.

Pirelli brought the hardest three tyres in its five-compound range – C1, 2 and 3. So even the softest tyre here was only really a medium. This was done on the basis of the track being estimated to impose similar tyre demands to those of Barcelona, with plenty of long-duration turns and a significant amount of braking too. Anything softer would surely grain itself away to zero tread, especially in the expected cool temperatures. Cooler usually equals more graining.

The harder the compound, the less likely it will be to overheat. Without the thermal degradation mechanism, it won’t lose much performance with wear. It will just suddenly be out of tread – like what happened at the end of the British Grand Prix, with tyres collapsing. It was to avoid such a scenario that these compounds were selected. The choice was probably about right too – for even the C3 was quite seriously graining its front left throughout the weekend. Anything softer would have grained even more. But that front-left could be nursed through the graining phase – about 20 laps – and when you came out the other side it would be very little slower than when it was new. So long stints – and therefore one-stop – were still feasible.

Even the medium (the C2) grained a little. But not so much that you couldn’t lean on it and force a hard pace. Turned out that made it much the better tyre on Sunday. It may even have been better on Saturday – as was suggested by the Mercedes drivers ditching their softs for the second Q3 runs and using mediums to better their times in locking out the front row, Hamilton ahead. 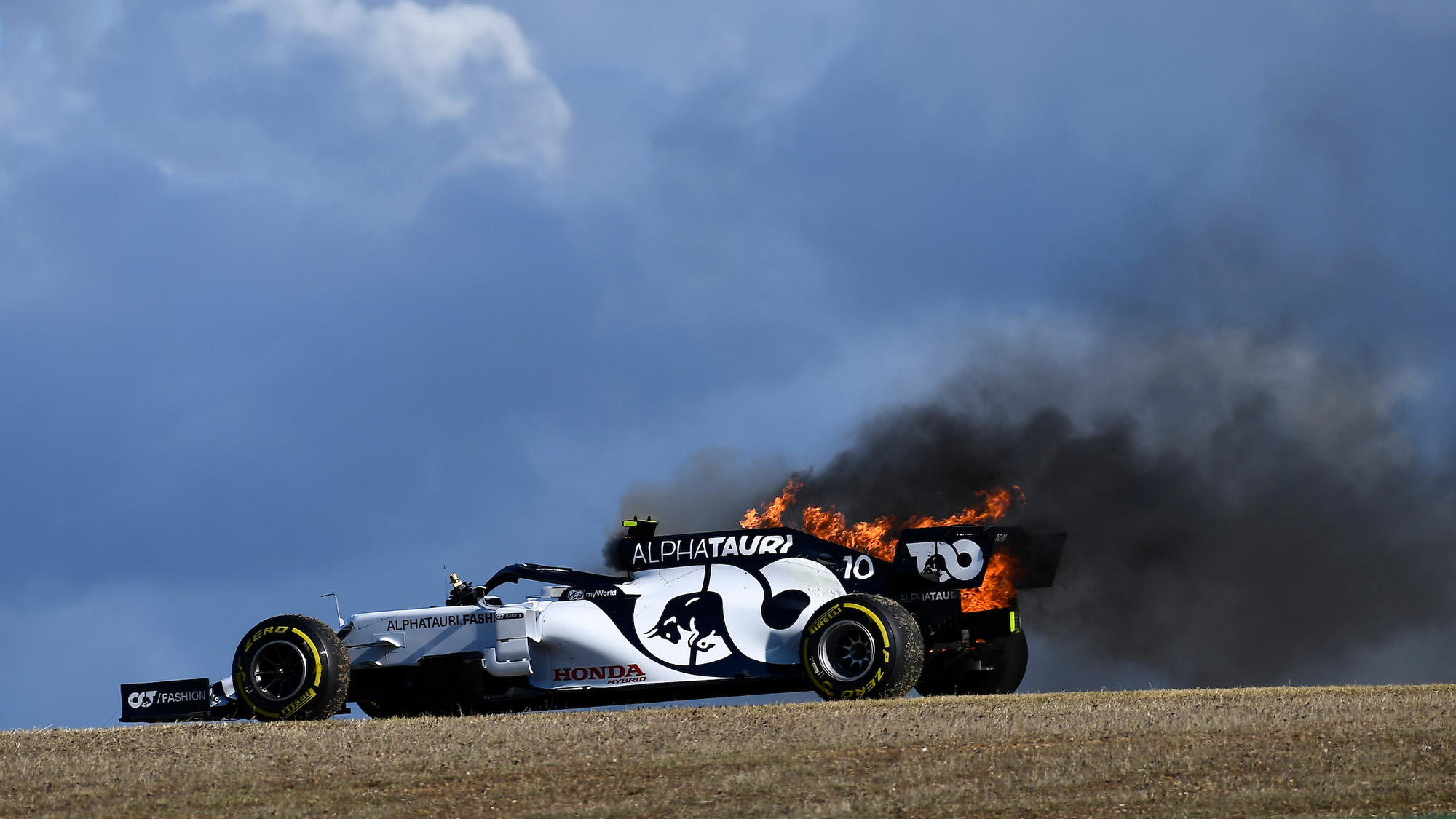 Pirelli locked out the first half-hour of the 1.5 hours Friday afternoon practice session for testing its prototype 2021 tyres. Every team had to run them in order to build up Pirelli’s data banks – and the teams were not told which compound they were.

The remaining hour was then interrupted by two red flags. One to retrieve Pierre Gasly’s fire-damaged AlphaTauri, another to clear the mess from a Lance Stroll/Max Verstappen collision. So no-one had done a long run. So no-one knew which was actually the better race tyre – the C3 or the C2. Or even how the C1 hard compared.

Most feared the C1 was just too slow. Mercedes didn’t. It reckoned the graining C3 would be the problem tyre and that the W11’s ample downforce could get the C1 working. So it planned around the C2 medium as the foundation of its strategy – qualify in Q2 on it so as to get it for the first stint, confident it would run quick for 40 laps or so. With the hard good enough to then get to the flag at 66. It might be a bit slow to get up to temperature, but the boys in the cockpit could deal with that. They were sure of it.

Red Bull really didn’t trust that hard, though. They reckoned the soft would be as quick, even if needing a little more nursing, than the medium. They also reckoned this was going to be a two-stop, as surely everyone’s graining left-front would quickly wear and enforce short stints. 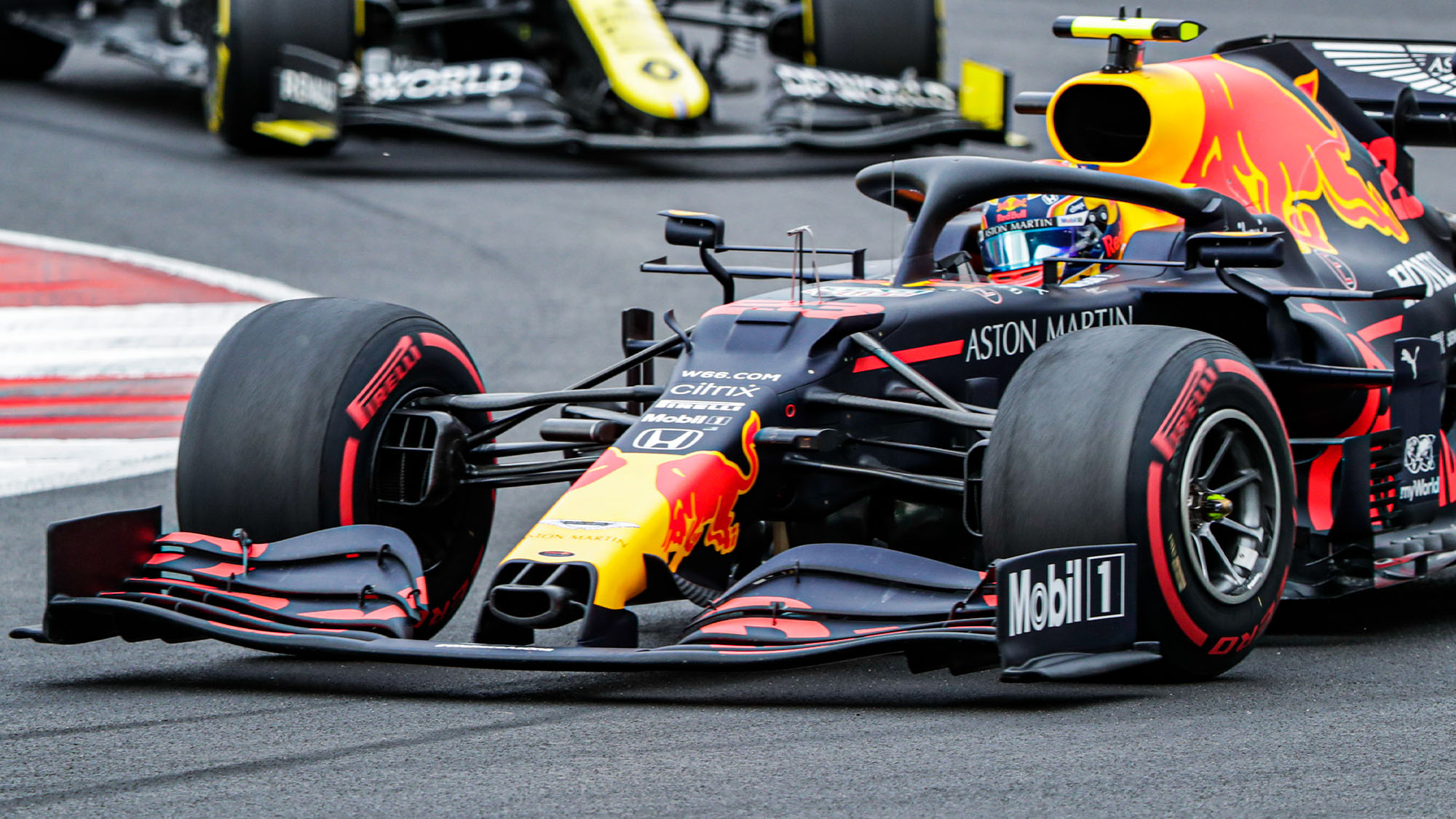 Red-walled soft tyres were the wrong choice in the race

Mercedes called it right, Red Bull didn’t. The wear of the soft wasn’t that bad at the speeds the graining imposed and one-stop was heavily favoured. Ferrari had a car quick enough (on phase three of its recent three-phase aero update) to adopt the Mercedes strategy of mediums in Q2. Sebastian Vettel could get no tune from it, just couldn’t bring them up to temperature and qualified 15th. But Leclerc had no trouble, got through to Q3 and proceeded to drive a stunning lap there that put him fourth on the grid, only 0.1sec shy of Verstappen. And on a better tyre strategy.

The soft just didn’t work very well. It retained its performance after the graining phase, sure. But it could not be pushed as hard as the medium. It would just grain the left-front away if you tried – which would have allowed the one-stop cars would be able to save a pit stop (about 24sec time loss) over you.

How it Played Out

So with slow-to-warm mediums on the Mercs, faster-to-warm softs on most of the others, the performance order was all jumbled up in the first few laps. Carlos Sainz and Kimi Räikkönen had instant temperature and initially starred. Sainz had his McLaren up to second place behind Bottas by turn 10 of the opening lap and was into the lead a lap later. Räikkönen vaulted his Alfa Romeo from 16th to sixth within the first seven corners. The Red Bulls weren’t switching on the softs as well as the McLaren or Alfa – and Verstappen briefly had Raikkonen snapping at his heels.

But as quick as the softs came up to temperature, so they began to grain. This was about four laps in – just as the mediums were finally coming up to temperature. So normal service was resumed – the Mercs moved back up to the front, Bottas – who’d got front tyre temperature faster than Hamilton and passed him on the first lap – still ahead. Verstappen was up to third but on his graining softs was being left behind by the Mercedes pair. Räikkönen too slowly returned to reality and dropped back.

Leclerc, on his mediums, quickly got up to fourth, kept Verstappen in sight, ran 11 laps longer and rejoined only 10sec behind. But the Red Bull was working much better in the second stint, now on the mediums (just underlining that it should have had them on in the first stint). The hard-tyred Leclerc thereafter consolidated a genuine on-merit fourth place, actually Ferrari’s most competitive performance of the season.

Hamilton took a few laps to work out the puzzle of how to drive the car in the car in the gusty crosswinds in a way that allowed him to retain temperature on mediums that were always on the cusp of falling below their temperature window. Bottas was struggling to do that and after about 15 laps was beginning to lose temperature in his fronts as the tread wore down. As he wrestled with the car out of the slow turn 13 on the 18th lap it snapped into oversteer, making him slower than the closely-following Hamilton through the fast final two turns onto the pit straight. With tyres that didn’t overheat like they usually do when running tight behind the car in front, Hamilton was able to stay glued to his team mate’s tail through those corners and deploy his DRS to retake the lead at the end of the pit straight. From there, he simply disappeared up the road as Bottas had no answer.
Had Verstappen chosen to emulate Mercedes by starting on the medium, he’d surely have pushed the Mercs harder. He was already trailing by 15sec as he made his first stop on lap 23 of the 66-lap race. The RB16 – which had qualified within a closer percentage to pole than at any other race this year – was much better on the mediums in the second stint and was within 8sec of Bottas at the flag. Rather underlining how it had started on the wrong tyres.