Can Charles Leclerc unlock the Ferrari SF90’s potential at the Azerbaijan Formula 1 Grand Prix? He certainly has a good track record at Baku… 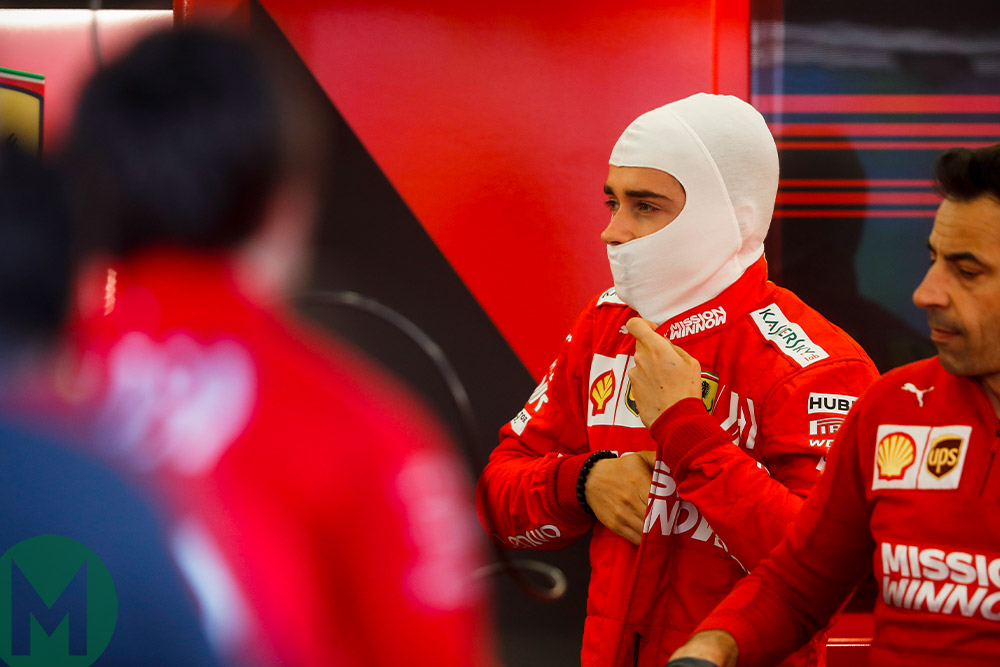 The Azerbaijan Grand Prix is obviously a bit of a crunch weekend not only for Ferrari but also the Formula 1 championship contest itself. As we discussed here last week, the Ferrari has suffered an underlying problem in all three races to date, even the one that Charles Leclerc dominated up until his late electronic problem.

Azerbaijan sees the first of what is to be a two-part upgrade but that is more than just an attempt at getting things back on course for the team before it’s too late. It’s also crucial in maintaining the momentum of the most exciting newcomer in F1 since Max Verstappen. We caught up with Leclerc on the eve of the weekend, got his thoughts on how it is operating within the massive stage of Ferrari in just his second season, the stresses of his rivalry with team-mate Sebastian Vettel and a few bits more.

“Obviously I’m enjoying it,” he says with the wry but sparkly smile. “It is a dream come true and I’m still living it like the first day.”

How does it differ from driving for Alfa Romeo? “There are a lot more people involved, a lot more resource. Things are done a lot quicker here. You ask something for the car and you get it a lot quicker. This makes a difference. It takes a bit of time speaking and working with so many people. Because when, say, you are doing a debrief there are a lot of people back home, hearing you and trying to talk to you and trying to develop the car. It’s just a matter of getting used to it and understanding who is doing what, because there are so many. And the questions are more detailed.”

But that’s just from inside the car. Obviously, it’s brought a whole new level of fame out of it. “It changes quite a bit. Especially after the first podium. F1 is a strange sport, where the people don’t see your face until you have a bit of success by going on a podium and they put a face to my name. But I’m staying a lot at home in Monaco and in the simulator there.”

One senses it’s going to be a long time, if ever, that enjoying the fame gets in the way of the focus. His focus at the moment is to be better. “With the little experience I have, I understand where I should put my focus. The team is helping me with this because they are aware I’m not so experienced.

“The talent is one thing. To be fast in F1 you must have talent, obviously. But after that it’s the work you are doing. The experience won’t make the talent more but can help the outside parameters which can help you go quicker on the track. There are some very powerful tools and these are things I’m getting better at using, things like diff settings for example. Just small things but they are powerful because they can make the vital difference. If you’re arriving at Ferrari fighting the best drivers there are, every little thing can make a big difference.”

This includes, of course, fighting the four-time champion on the other side of the garage. Leclerc’s been quick enough to cause tense moments on the pitwall at all three races so far; from his disregarding a team instruction to remain behind ‘for two laps’ in Bahrain, to making his point when asked to move aside for Vettel in China. How does he feel about Vettel being the favoured one?

“It’s as I’ve said since the beginning of the year: what I have to do on track is prove what I’m capable of and then hopefully the situation will change at one point. I’m here for that because obviously every driver wants to be the quickest. So that’s my target and see what happens then. But until then, yes I understand the decisions; it’s not easy for a driver to accept them but also I understand them. Next to me I have a four-time world champion in his fifth year with the team and I understand it’s that way for now and I’ll push to change things…. I will do whatever I am told, up to a certain point.”

This subject will only come to really matter this year if Ferrari can provide a title-contending car. Leclerc’s not yet ready to believe that isn’t what he’s got. “It’s all about trying to find the right set-up and we’re still working on it. I think we’re going in the right direction but I think it takes a bit of time to learn how a car works… We need to understand but overall if we are putting the car in the right window we’ll be strong. We have a package this weekend which hopefully will help us close the gap.”

He and Vettel are both saying the same things about the car’s weaknesses, but he acknowledges they drive slightly differently. “I’m maybe affording to drive with a bit more oversteer but apart from that we describe the same issues on the car even though we drive with a different balance. But in the end the issues are the same for both of us. Which is important for the team to go forward in the development of the car. But in the fundamentals that are not right, we are saying the same things.”

Interesting that he talks of living with more oversteer than Vettel because that’s still a lot less oversteer than he initially tried to live with as he came into F1 last year. “For the first three races I was trying to drive like I had in my junior career. With these new F1 [cars] when I first drove them what shocked me was how much understeer you need to drive these cars with. You cannot drive them with the balance I used to have in F2; it’s impossible. But compared to team-mates I’ve had until now  – and with Marcus [Ericsson] – I am driving with a bit more front compared to them.”

The breakthrough came at this very track last year, when Leclerc went from being just a promising possible star to something really rather special. “We did a big step towards understeer for here because it’s a city track and we just wanted a stable rear. I don’t think it’s the power that makes a difference; it’s just so much more downforce that when you are losing the rear you are losing a lot more downforce and it makes it difficult to get the car back and takes a lot of confidence away.”

If the car is strong this weekend, just watch Leclerc light up. His record here is spectacular: from his winning F2 performances to his sensational drive in the Sauber last year. “I don’t know what it is really. I enjoy city tracks and I’m just confident on them. I really enjoy the challenge of getting close to the walls, the adrenaline you get, the room for mistakes is very small, to get to the limit without going over it.”

If Ferrari has managed to unlock the car, stand back…