In the next issue of the magazine you can catch up with Lewis Hamilton’s reflections on his season just gone. But one part that wasn’t included – and which he says had a more profound impact upon him even than he was expecting – was the passing of Niki Lauda earlier in the year.

They’d become close – and from unpromising beginnings. “Yeah, I recall one year in Valencia when I was driving for McLaren I was being questioned about, ‘Niki has said this about you, Niki has said that, what do you think?’ and it seemed he didn’t have a very high opinion of me.”

I can interject at this point, for I recall having conversations with Lauda about Hamilton at that time. He held him in huge regard as a driver but questioned some of his choices off-track and, being Lauda and a tv pundit at the time, wasn’t shy about expressing them. You can find more details in an article from that time.

So it was only natural Hamilton was initially a little bit wary as Lauda intervened in trying to recruit him to Mercedes, pushing on a door opened by Ross Brawn but which seemed to be closing again on the run-up to the 2012 Singapore Grand Prix.

Hamilton had told both McLaren’s Martin Whitmarsh and some of his own friends that he’d been tempted by the Mercedes offer but, on balance, he was intending to re-sign with McLaren. But in the meantime something had happened behind the scenes as McLaren’s Ron Dennis tried – unsuccessfully – to manoeuvre Mercedes into being less interested in him than they were.

They indeed formed a great bond, but one where Lauda never shied from telling Hamilton when he’d screwed up

Hamilton found out about this during the Singapore weekend and was, not unnaturally, wavering between his two options once more. Enter Lauda with his blend of mischief and devastating logic. You can almost feel Hamilton’s uncertainty as they talk on the phone, then meet in his Singapore hotel room.

“So in Valencia when I was hearing all this ‘Niki said this’ stuff I thought, ‘One day when I’m older I’m not going to talk down the younger drivers.’ It still happens now, even from those who have only recently retired, which is sometimes disappointing. I don’t want to be one of those older drivers saying, ‘he is crap, he is doing that,’ and judging. All of us drivers are going through our own journey one way and another.” 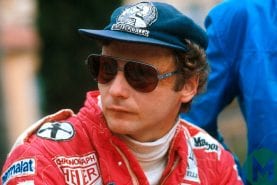 How Niki Lauda shaped his destiny

That was the Hamilton mindset about Lauda as the phone rang. A mix of that and immense respect for his professional achievements. So they each had that mutual respect in between the uncertain initial personal dynamics. “So that was a little bit worrying. Then all of a sudden I’m in this position where I need to make a big decision in my life and Niki is on the phone. On one hand I’m. like, ‘Wow, I’m talking to a three-time world champion,’ but I didn’t really know him or whether I could trust this guy. But I sat down with him and in the journey we went on I would like to think we grew to love each other as friends.”

They indeed formed a great bond, but one where Lauda never shied from telling Hamilton when he’d screwed up. Talking with Lauda a few days after the 2016 Spanish Grand Prix collision between Hamilton and Nico Rosberg that put both Mercs out of the race on lap one, he explained that he’d listened to Hamilton’s explanation, which was that he had seen Rosberg’s reduced power light and knew what it meant; that he had to attack immediately, which is why he launched down Rosberg’s inside – triggering Rosberg into squeezing him onto the grass there and all the calamity that followed.

Lauda had responded with, “If you saw he was on reduced power, it makes more sense to choose the outside, no? That was your mistake.” No-one else in Hamilton’s camp would be in a position to offer such tough love advice; they wouldn’t have the driving stature.

But they had a ball as friends. “I went to visit him [at his home] in Ibiza,” recalled Lewis. “He would often invite me, we’d fly on his plane and I’d always get him to tell me the stories. He had so many great stories. If you watch Rush he’s portrayed as the serious, dedicated guy in contrast to James Hunt. But that was only one side of him. He loved the ladies too.” 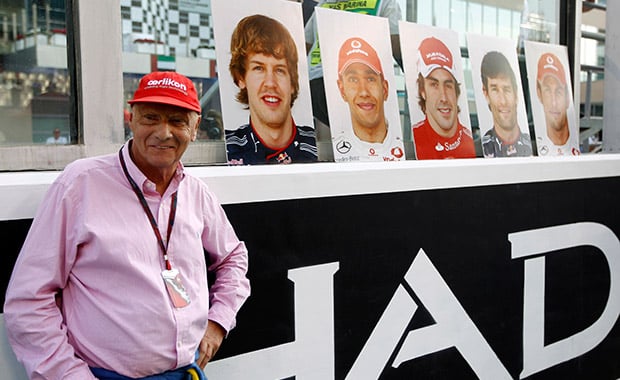 The world according to Niki Lauda

We were sitting in the McLaren ‘brand centre’, three of us, mid-season 2008, just chewing the fat one grand prix Saturday, qualifying still a couple of hours away. In walks…

Seeing this legend and his indominable spirit slowly claimed by illness was a harrowing experience for Hamilton. “I went to see him just before he passed. It was really tough to see him. We had been sending videos to each other and had seen him through his biggest dip and he came back and was in a wheelchair and I was really hopeful. And then he had another dip and started to get worse. And that is when I went to see him. And it was still a shock to see your mate in a bed, plugged in, and I’ve been there before. My auntie died of cancer so I had seen it. But it is always a shock. And you could see his spirit, this bright spirit of his still shining, but it was starting to dim a little. And his fighting spirit was starting to dim, which was only natural when you are going through such a long battle. So it just hit me.

“I just so miss talking to the dude, I miss his texts, the videos we shared. I still have them. I’ve kept them and still revisit them. Without his support I probably wouldn’t have made the switch to come to this team and I don’t think this team would have been as successful without his support.

“That’s what he was best at – support and being real. He’d be the one who could go to the board, push them, break their balls. Because he was the bridge. To have someone talking to the board who understands and empathises how difficult it is to deliver weekend after weekend, when you make a mistake. That is where he was such a great pillar for me.

“When he took his hat off [in salute to an achievement in the car] or he goes like this [the finger/thumb gesture indicating something very close to a skirting disaster limit], you knew it was real, that you’d really done something. I miss him a lot.”