After Ferrari launched its SF90, one question comes to mind: is the year that Ferrari topples Mercedes for the 2019 Formula 1 championships? 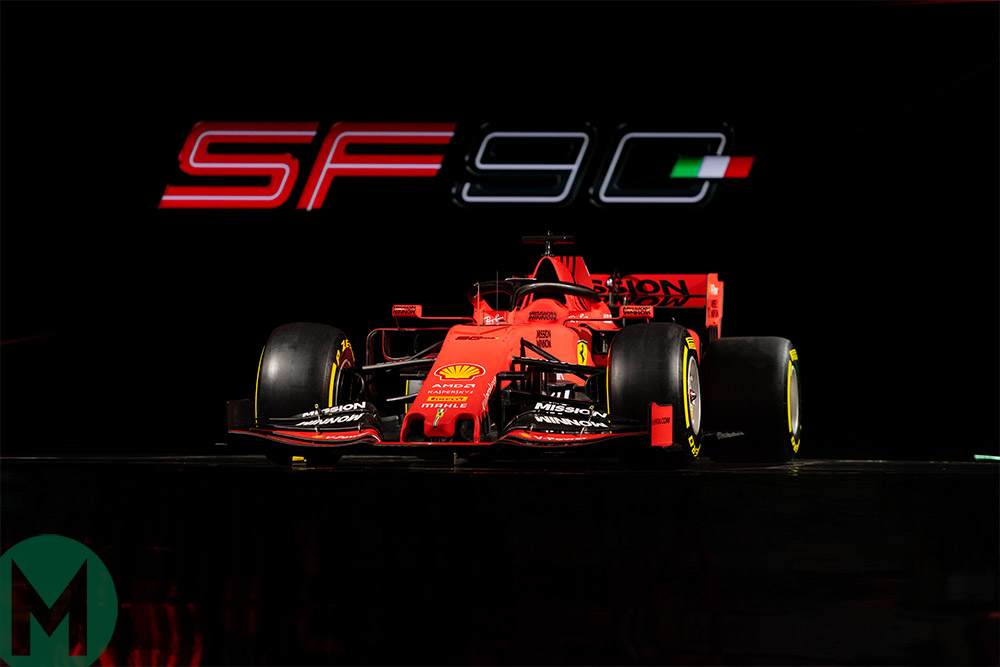 So is this the one? Ferrari, on the back of two near-misses, takes aim at the Formula 1 title with the new SF90, so named to celebrate 90 years since the forming of the Scuderia.

It’s an impressive-looking piece of kit, clearly related to the cutting-edge cars of the last two seasons but striving for yet more.

Quite aside from the visible 2019 regulation changes, it differs from its predecessor with a repacking of the cooling system that has allowed the engine cover to be miniaturised with only the slightest compensating increase in sidepod inlet dimensions.

The rear bodywork features a beautifully sculptured shrink wrap over the mechanical components, with the upper bodywork spilling over into a deep undercut, to give a much more extreme coke-bottle profile viewed from below than would be apparent if looking down from above in plan-view.

The same ingenuity that has put the team at the creative forefront of F1 in the last couple of years is very evident – and there are rumours of further innovation in the rear suspension.

Just like Ferrari, Mercedes has continued ploughing its own furrow – in this case with another long, low-rake car – the W10 – with slimmer sidepods and lots of cunning repackaging of the cooling system. The new regulations have not fundamentally altered the technical direction of either team so it would be no surprise if we saw a continuation of their duel of the last two years. If those seasons are anything to go on, the decisive factor will not be the quality of the car.

Last year, the Ferrari was quicker at more than half the tracks even if Lewis Hamilton’s qualifying performances skewed the stats. It wasn’t the car that won the championship last season: it was the team (Mercedes) and the driver (Hamilton). Usually, it’s the car.

Decoupling Sebastian Vettel’s performance last year from that of the team isn’t so easy. He had the best car but among the worst environments in terms of the operational aspects and the psychological support.

Comparing that performance with someone in a super-slick team that was completely devoted to them isn’t really comparing like for like. Which, as has been discussed here before, ultimately comes down to team leadership.

So with Maurizio Arrivabene gone, can Mattia Binotto provide the final ingredient? A lot depends upon his relationship with Ferrari bosses John Elkann and Louis Camilleri and how empowered he is allowed to be.

But either way, the autocratic style of Arrivabene has been replaced by a more measured, warmer style. That was very much the message given by all three men at the launch. “Serenity will prevail,” insisted Camilleri. “We will work with creativity, talent and transparency.”

Binotto is a 25-year veteran of the Scuderia and has earned huge respect from those around him. He’s not a technical innovator, but a manager with a good technical background. He’s great with people, he’s calm, ambitious but simpatico. “He has great leadership skills,” emphasised Camilleri, “and he knows the Scuderia. He’s a team player and he will make a huge difference at all levels.”

Whatever the corporate struggles may be (and there are continuing rumours about disappointment at the company’s commercial performance in the last 12 months), if Binotto can be left to run the Scuderia on his own terms, we may yet see the potential of the technical group he created authenticated by world titles.

And if he does that, he becomes one of only a handful of team bosses that nine decades of history will readily recall – aside from its legendary founder.