Amid the flurry of nine grands prix in 11 weekends, there have been a few developments in the regulations and as we catch a rare pause for breath before next weekend’s race in Sochi, it’s a good time to catch up on their intent and effect.

The season’s biggest controversy has, of course, been Racing Point’s near carbon copy of last year’s Mercedes W10 and the subsequent protest by Renault regarding the pink car’s brake ducts. Those making the protest did not believe Racing Point’s claim that it had re-created the W10 only by using photographs.

They believed they would have Racing Point bang to rights if it was shown that the brake ducts were identical to those of the Mercedes, as the internals of those could not have been copied from a photograph. That turned out not to be the germane issue. The front ducts were indeed identical – but that was because they had also been used on the Racing Point of last year when brake ducts were non-listed parts (i.e., which could be purchased from other teams).

The W10-copy rear ducts, however, had not been on the 2019 Racing Point and had simply been copied from those purchased (but not used) last year. It was ruled in this case that the front ducts were already in Racing Point’s DNA when the status of brake ducts was changed in the regulations from non-listed to listed, but the rear ducts were not. Hence the fine, the points penalty and the regular post-race reprimand.

But this episode did trigger the FIA into action regarding what would be allowed as from 2021 for any new designs. No longer would it be permitted to simply wholesale copy another car. Previously all that had been forbidden was direct data transfer from one team to another, thereby theoretically leaving the way open for copying by photographic means.

But the governing body intends to close this off from next year. The cars on the starting grid of the season-opening race in Austria this year are considered to be the basis for any further development into ‘21, which cannot be done by replicating whole sections of bodywork from other cars. The wording of this regulation has yet to be defined but the intent has been made clear to the teams. Furthermore, the use of 3D cameras, scanners or any of the clever software currently available which uses images from different perspectives to calculate templates is all banned in the creation of parts. Teams may no longer use these tools in ‘designing’ components or bodywork. 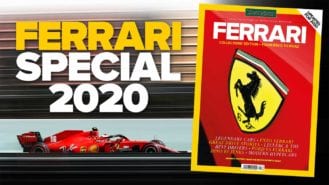 But that’s for next year. For this year, there’s nothing to stop you taking direct inspiration from the parts of another car – and the updated Racing Point raced at Mugello last week featured new front brake ducts and new sidepods, both of which were uncannily similar (though not identical) to those of this year’s Mercedes W11.

Tangentially related to the Racing Point/Mercedes issue is the matter of development tokens for 2021.

As part of the post-pandemic drive to further reduce costs, only three development upgrades may be made to each car next year. This is a complex set of regulations whereby some components are assigned a single token value, others two. But an exception has been made for those customer teams currently using 2019 components (ie Racing Point and AlphaTauri, with their respective Mercedes and Red Bull rear ends) wishing to upgrade to the 2020-spec.

These will not incur the use of any tokens, which has irritated Ferrari, Renault and McLaren. Because the rear ends of the 2020 versions of both the Mercedes and Red Bull are big technological upgrades, with swept-back lower wishbones, the rear ones feeding into the crash structure behind the gearbox, rather than the gearbox itself. This clears a far cleaner airflow path in an extremely aerodynamically productive part of the car.

Ferrari was continuing with its appeal of the FIA’s Racing Point brake duct decision whilst campaigning to have the free token for Racing Point and AlphaTauri removed, and one action seemed implicitly linked to the other. But Ferrari has since dropped the brake duct protest yet the free token remains – so we await to see if there is some other ruling that may have placated Ferrari.

Any hope Ferrari may have about the imposition of a single engine mode helping it looks forlorn. From Monza, the FIA imposed a new Technical Directive that insisted only a single engine mode could be used from the beginning of qualifying to the end of the race. You can choose different modes for different tracks, but can no longer change during qualifying or race, effectively outlawing qually or overtaking modes that involved any changes to ignition timing, fuel flow, oil burn etc.

Because Ferrari was already extremely restricted in this regard (since the pre-season Technical Directives), it hoped that the ruling might bring the others down towards its level. All that appears to have happened is that any engine mileage previously used up by running the more aggressive modes has now been deployed instead – by Mercedes, Renault and Honda – to a stronger baseline mode. Charles Leclerc’s relatively strong qualifying and very poor race performance at Mugello suggests the ruling has simply switched around Ferrari’s strongest and weakest parts of the weekend.