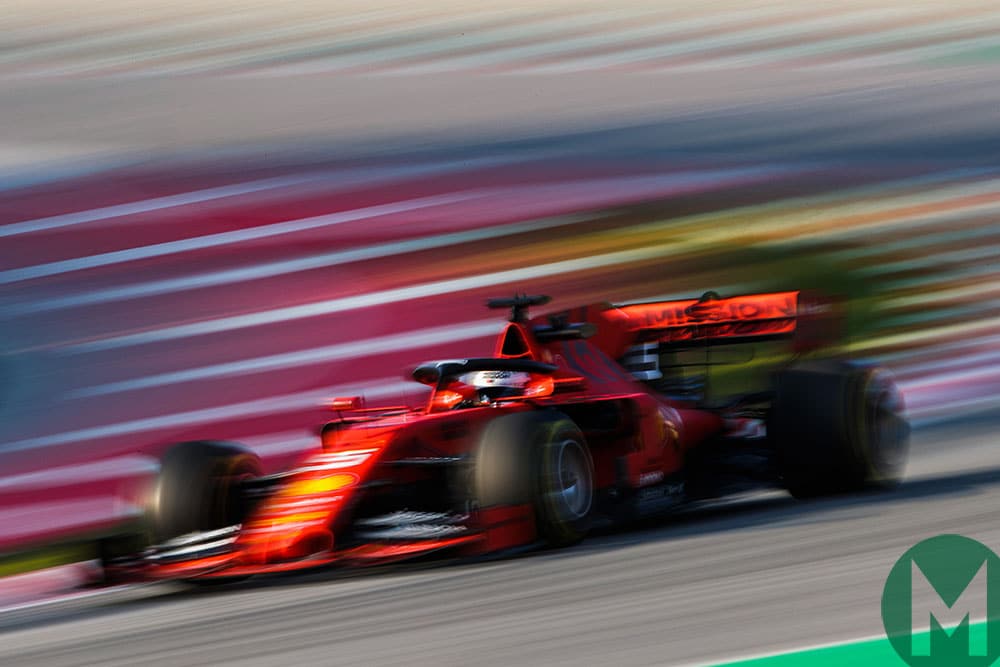 The weather was kind to F1’s first test week, the Barcelona skies clear through the four days, the temperatures pleasantly mild. Even the notorious wind that usually snakes its way down the valley from the Pyrenees early afternoon was not really evident – so giving a rare consistency in track conditions throughout.

As a result, the competitive picture between the new cars was clearer than is usually the case at this stage of the preseason.  As always, however, there are the provisos about comparing cars with unknown fuel loads. Yet still a pattern began to emerge, the Spanish sun shining a light on the initial hierarchy.

You may have seen the headline times that put Nico Hülkenberg’s Renault quickest on the final day ahead of Alex Albon’s Toro Rosso. But these times were set of the softest of the four tyres in use, labelled for the purposes of the test the C5 (roughly equivalent to the old hyper). Pirelli reckons there was a roughly equalled-spaced 0.6sec offset between the C5 and C4 (equivalent to super-soft), the C4 and C3 (the old soft) and the C3 to C2 (the old medium).

When we strip away the tyre offsets, the competitive picture appears to tally very closely with what the teams themselves were reporting – the headline news of which is that Ferrari’s new SF90 hit the ground running as a rocketship, beautifully poised, consistent and reliable. Sebastian Vettel and Charles Leclerc were both delighted with the car, Vettel describing it as the best preseason test he’s ever experienced.

Out on track, it looked as though it allowed them all sorts of liberties with Leclerc in particular often to be found experimenting with how late he could brake, how much kerb he could get away with. It was noticeable how much earlier than anyone else they get on the power, feeling the stability and going with it.

In this way it was joining up the acceleration stretches between, say, the exit of Turn 1 and the beginning of Turn 2, visibly better than anything else. Vettel and Leclerc shared the car on each of the four days and were generally extremely evenly matched for pace – at around 0.4sec clear of the field when account was made for the tyre offsets.

Now, we do not definitively know if this was set with equivalent fuel loads to the following Red Bulls and Mercs. But it would be unusual if it wasn’t. The typical programme for the teams given the beautifully clear track conditions they enjoyed would be initial aero correlation tests (as seen by the various bits of metalwork hanging off cars around the sidepods and wings), followed by a steadily increasing sequence of laps with a reference fuel load and the comparison of various components.

Full-on race simulations, with full race durations and ‘live’ pitstops are usually only attempted in the second week. Likewise full qualifying, low-fuel simulations. There was no evidence of either in this first week. So what we had were a series of multiple lap runs, enough to see the patterns – and with no reason to suppose that anyone would be running an order of magnitude different fuel load to anyone else.

Given all the above, here’s approximately how it looked if we correct all the times to the hardest tyre used (the C3).

Unsurprisingly, it would appear we have the same elite group of top three teams as in the last few seasons. Within that group Mercedes was never entirely happy with the balance of the new W10 and it was visible that it was keeping its drivers busier than the Ferrari.

Two different versions of front suspension were tried but neither gave the car the balance Hamilton and Bottas sought. It would be no surprise to see a much-improved car next week after the boffins have analysed the results of this week.

Red Bull had an untypically reliable opening first week of testing. There was no evidence of any glaring power shortfall from Honda (although everyone’s high power modes will likely only be seen in the qualifying simulations of next week) and it ran reliably in the Red Bull and Toro Rosso. The RB15 appeared responsive and agile, but without the flowing, benign stability of the Ferrari at this stage.

Best of the rest appeared a close-run thing between Renault and Alfa Romeo. The newly-labelled former Sauber team has come up with another highly original car (check out that front wing) and Kimi Räikkönen was reporting that it felt good.

The McLaren time shown above is derived from a lap that Lando Norris did on Tuesday using the hardest tyre. But it wasn’t reflected in anything else the MCL34 did all week, suggesting either that the C2 tyre had less of an offset than Pirelli was expecting or that Norris somehow squeezed a very special lap from it. Generally, the McLaren performed towards the back of that midfield group.

Williams only turned up for the final two days, having not got the FW42 completed in time. The team is clearly in some disarray at the moment. Watch this pace.