It was a race that exploded into life, quite literally in the cases of Lance Stroll and Max Verstappen as Baku once again provided us with a memorable race full of drama.

Sergio Perez claimed his first F1 win with Red Bull, Sebastian Vettel and Pierre Gasly scored their best results of the season, and Mercedes finished with both drivers outside of the points for the first time since the 2012 United States Grand Prix.

A lock-up thanks to some brake magic gone wrong also spelt the end of Lewis Hamilton’s consecutive points-scoring streak.

While the attention was on the front of the pack, there was plenty else going on right up to the chequered flag on Sunday in Baku.

Here are a few things you might have missed from the 2021 Azerbaijan Grand Prix. 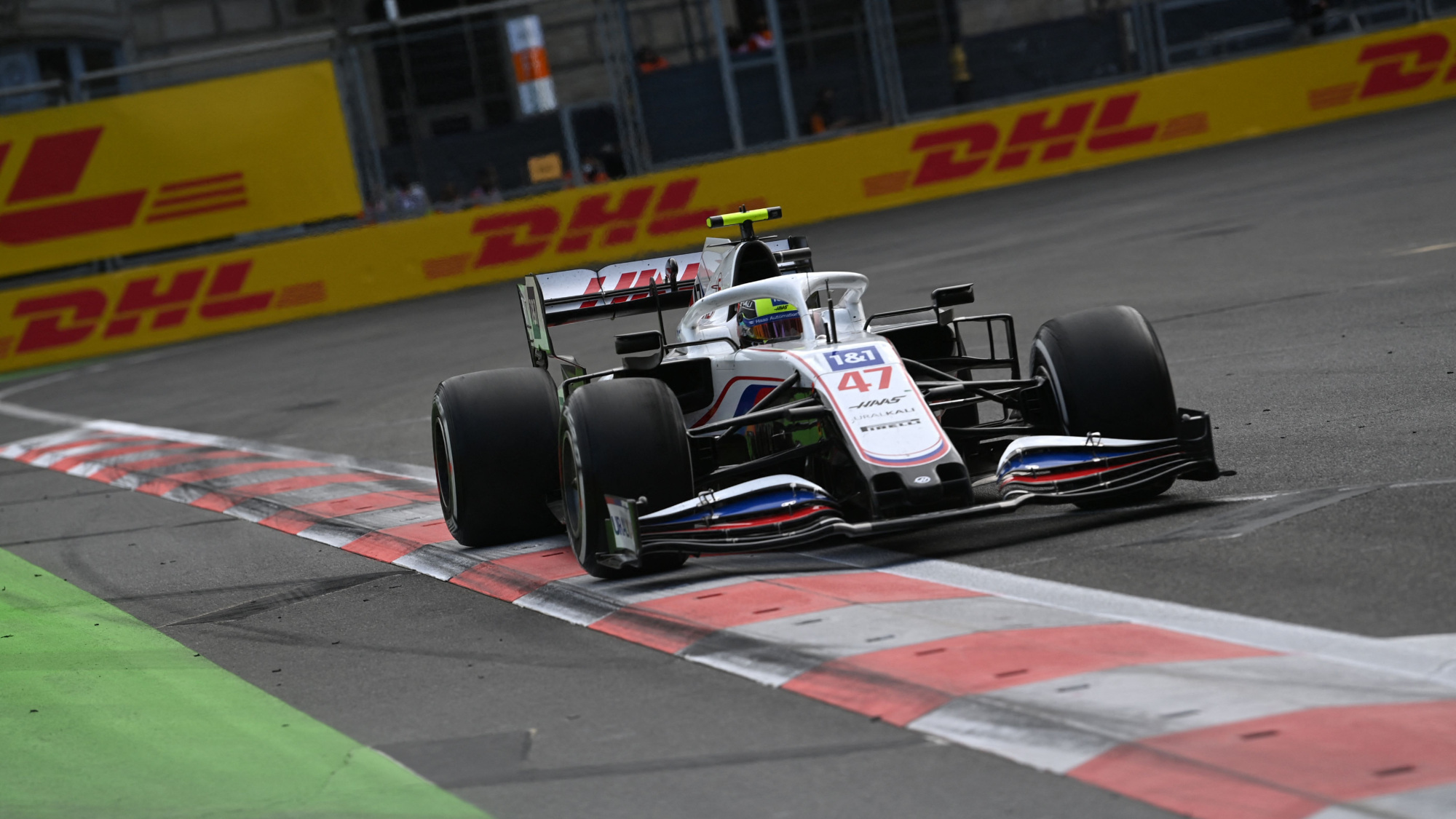 There was drama all the way until the chequered flag in Baku as outside of the points, the two Haas drivers were separated by just 0.074sec across the line, but it could have been even less.

Having weaved their way through the final corners, Mick Schumacher had a tow on Nikita Mazepin ahead and was closing in rapidly. Mazepin though took it upon himself to throw a half-hearted block just as Schumacher drifted to the right, pinching the German close to the barriers and requiring the F2 champion to take evasive action.

Despite the drama, Schumacher got by and claimed the position by a very narrow margin but was less than pleased with his team-mate’s actions.

“What the **** was that? Seriously, honestly? Does he want to kill us?” was posed over his radio immediately afterwards but team principal Gunther Steiner called the incident a misunderstanding and that all had been fine behind closed doors.

“There was a situation on the straight, that was all resolved, and we’ve cleared the air. There was some misunderstanding, but we’re fine and all moving on from it,” he said post-race.

13th and 14th was also good enough to lift Haas back above Williams in the constructors’ standings despite the non-points finish. 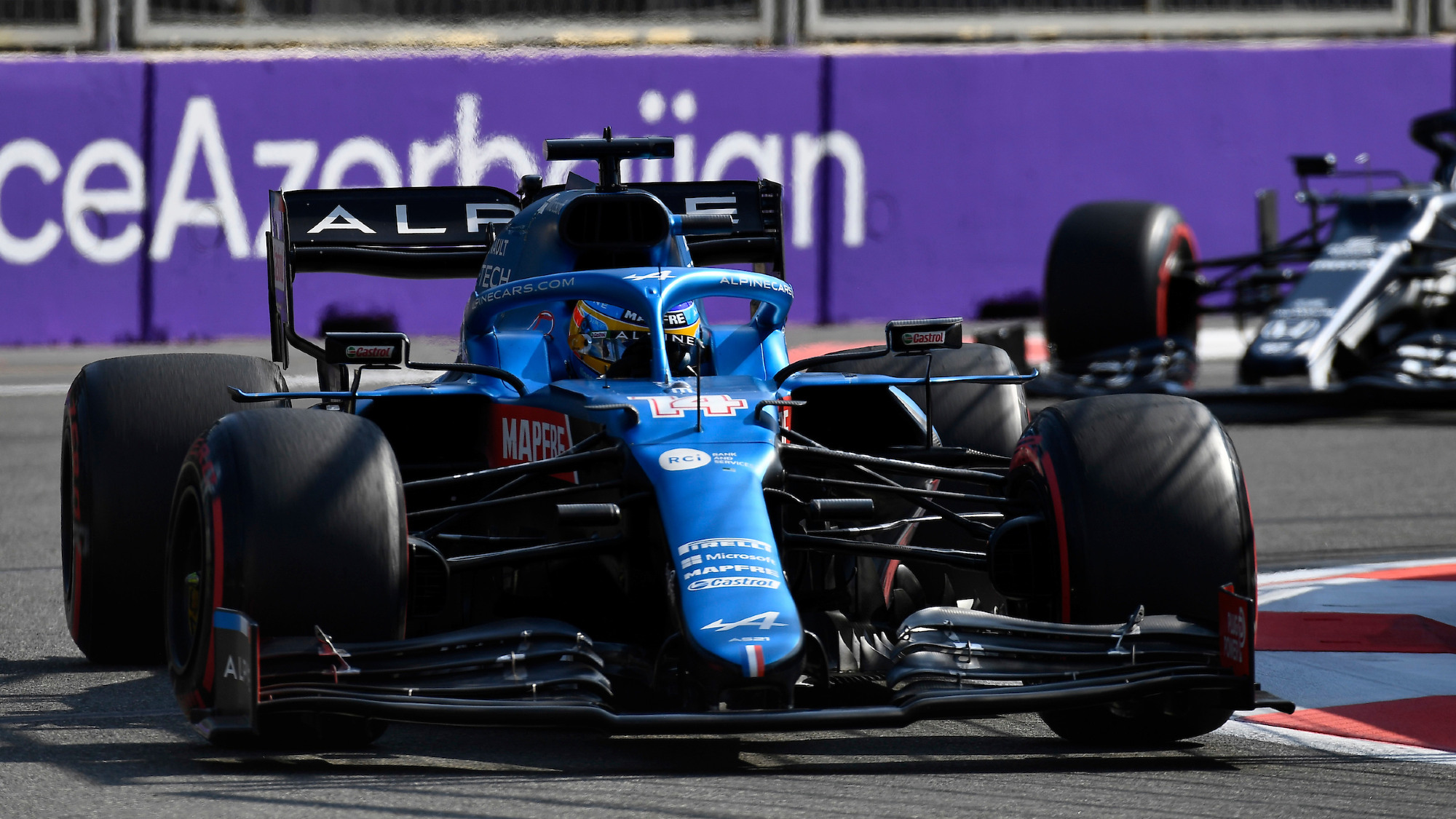 Alonso pulled off several overtakes on the race restart

On the final restart, Fernando Alonso lined up P10 on the grid for a shootout to the finish. By the time he saw the chequered flag, the Spaniard was in sixth after an impressive couple of laps that were typical of what we’ve come to expect from the two-time champion.

As Hamilton ploughed on at the first corner, the Alpine man wasted no time taking advantage of the ensuing chaos. A great initial launch from Daniel Ricciardo and a comparatively poor one from Carlos Sainz in front forced the Ferrari to go defensive, allowing Alonso to seize the inside line at Turn One, gaining three places in the process with Hamilton in the runoff.

Yuki Tsunoda was locked in battle with Lando Norris and attempted a move into Turn Four that didn’t quite come off as the McLaren driver pinched the AlphaTauri to the apex.

This allowed Alonso to sweep to the outside of Tsunoda approaching the Turn Five and Six chicane, run his Alpine down the outside late on the brakes and into a well earned sixth place, one he’d hold onto until the finish.

Aside from the podium finishers, Alonso was the biggest winner on the final restart as he showed off his experience when it counted most.

What is brake magic? 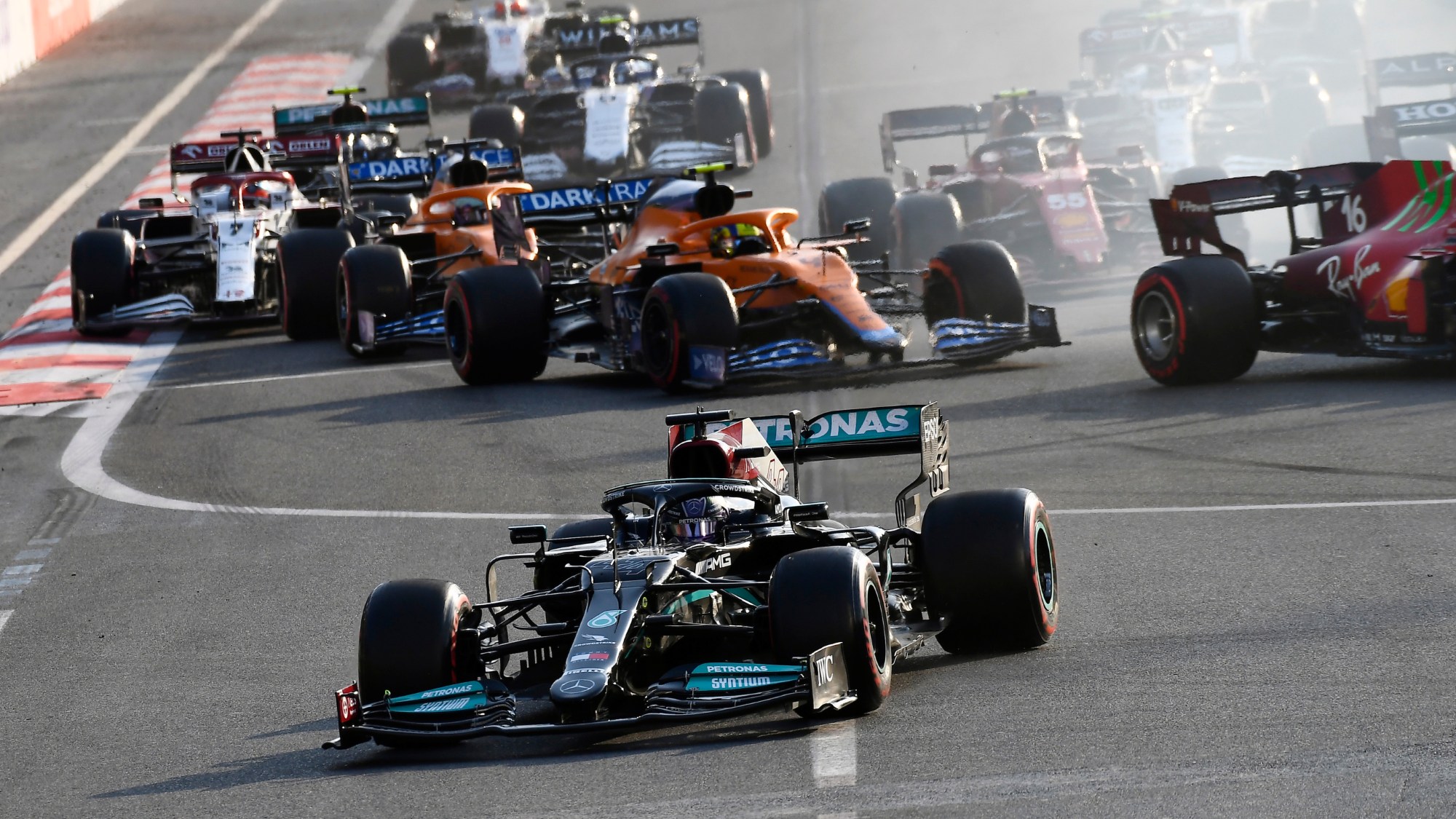 Hamilton knocked the brake magic button back on after the race restart, costing himself the win

It looked to be the perfect restart for Lewis Hamilton as he drew alongside Sergio Perez entering the first corner.

The Mexican’s getaway wasn’t nearly as good as that of the Mercedes driver and it forced him to squeeze Hamilton as much as he could approaching the braking zone. His move to the left though prompted the error that ultimately won him the race. 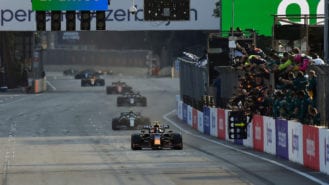 Near misses and bad switches: 2021 Azerbaijan Grand Prix what you missed

There was plenty to keep an eye on throughout the Azerbaijan Grand Prix in the latter stages, so here's a few things you might have missed from a chaotic afternoon

Hamilton makes his race starts with his left hand on top of the steering wheel rather than wrapped round the grip in order to get better control of the clutch to ensure a better launch phase. As Perez jinked to the left, Hamilton brushed a button that controls the brake bias of his car, the switch is called brake magic.

It is a system that has been used by Mercedes for a number of years for race starts and safety car restarts in order to generate better tyre temperature. The ‘magic’ button shifts the brake balance forward to around 90%, warming the brake callipers and through the heat generated, more effectively raise tyre temperatures prior to restarts.

Once Hamilton had touched the switch, he accidentally turned the system back on so when he applied the brakes at the same point as Perez for Turn One, it left him with no chance of making the corner.

Having looked set to take a sizeable points lead over Max Verstappen, it could prove to be a championship-defining error from the seven-time champion.