Being a three-time Formula 1 world champion puts you in a select band. Only 10 have done it.

And, of the 10, one stands apart, but for the wrong reasons. His only mention in discussions of F1 greats seemingly is when citing that statistics don’t necessarily mean greatness.

“I can’t tell you why, but he still doesn’t get the recognition that he really deserved,” says Nelson Piquet’s long-time Brabham team manager Herbie Blash. “And he could have been a four-times or even possibly five-times world champion.”

The consensus is that Piquet impressed at Brabham, and won his first two titles there, where all was laid out for him; then he moved to Williams alongside Nigel Mansell and was ‘found out’. But is this fair? 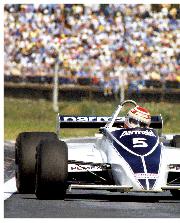 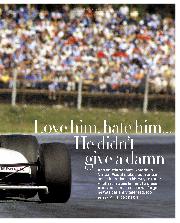 “One of the things that very first impressed me, I got to know Nelson when he was in Formula 3 and we were racing I think it was Paul Ricard and Nelson was basically quicker than anybody else down the straight.

“And what he was doing, he would actually have very loose crotch straps so that literally on the straight he could just slide down the cockpit to make his car more aerodynamic.

“That was the one thing that really impressed me, that he was a thinking driver.

“With Brabham we were possibly taking the rules to the absolute limit and beyond sometimes and of which Nelson was obviously very supportive!

“[Brabham designer] Gordon Murray and Nelson, [were a] bit of a formidable team, at that point similar to Colin Chapman and Jim Clark.”

It is undeniable however that, as intimated, perceptions of Nelson Piquet split into distinct Brabham and post-Brabham periods.

Contemporary ratings of Piquet from the end of 1985, when he left Brabham, are unrecognisable from the driver rated today. That year’s Autocourse Top 10 drivers’ list said “the argument still stands; Nelson Piquet is considered by many to be better than Prost and Senna.” Niki Lauda at the same time rated Piquet as the best driver in the world.

Piquet though, exasperated by Bernie Ecclestone’s reluctance to spend on his retainer, left Brabham for Williams for 1986. And it heralded a hit to his reputation. 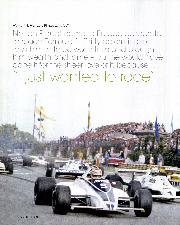 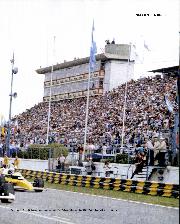 There’s a glimmer of recognition in his eyes as he walks towards me. We first met in 1978 when he came to England with his Formula 3 team, fresh from…

Brabham had been perfect for Piquet. “Yeah, without any doubt,” Blash says on this. “If he’d got the finances from Bernie then I think that he would have gone on to win more world championships [at Brabham], but of course we were actually going through quite a hard time with the BMW [engine].

“Then we were coming up to the BT55, that was a disastrous car, but if Nelson had stayed with us he could have possibly made that car a little more competitive than it was purely because he was very good at working with [BMW engineer] Paul Rosche and the BMW team and Gordon.

“He was very much a team player. He was just very close to the whole team; in the early days he did spent lot of time actually in the factory.

“It was very very sad times [when he left] because it was very much a family team, and the team had stayed together quite a long time. It was like losing one of your very very good friends.”

When Piquet signed for Williams, all expectation was he’d get a clear upper hand on team-mate Mansell. But late in ‘85 Mansell had a couple of breakthrough grand prix victories, and come ‘86 was a top-level performer. Twelve months on, Autocourse instead asked if Piquet was “a myth exploded?”

Yet the Mansell match up wasn’t that simple. Early in 1987 Piquet had a sickening crash at Imola’s Tamburello, and it had a major effect on him. He had trouble concentrating and struggled to sleep for more than two or three hours at a time.

It apparently impacted his driving too. “That was my personal opinion that it did,” Blash notes. “I don’t think there’s any doubts about that.”

The stats back up the point. Before Imola there was little to choose between Piquet and Mansell at Williams on pace and results. But after Imola suddenly Mansell outpaced Piquet in qualifying by more than six tenths of a second on average and dwarfed his wins total.

Piquet also was one who required a team to be built around him. “Oh yeah, even when he was driving with Niki for example as a team-mate [at Brabham in 1979],” Blash recalls, “if there was any other driver that was going to be competitive and if Nelson couldn’t get the whole team on his side then no he was not a happy person.

“And of course at Williams, Mansell was there so there was no way he was going to be ultra-happy there.”

Faced with all this too Piquet dug in for warfare, psychological and otherwise. “When he was with Williams he was doing whatever he could to try and get into the head of Nigel, likewise with Senna,” Blash says. This continued beyond his spell with the team, with notorious comments about Mansell’s wife and Senna’s excuses for defeat, made in early 1988.

Yet it also is far from the case that Piquet was only as good as the situation he was landed in. For example in 1983 he took the first ever drivers’ crown with a turbocharged engine, the BMW. Yet getting to that point was not plain sailing, and Piquet was crucial in his knuckling down.

“All the time he had a competitive car he was he was a fighter. Nelson definitely wasn’t a guy to give up.”

“We went through quite a few occasions like that, especially on the engine side, the BMW was a total disaster,” Blash recalls.

“It looked as though we were going to have a divorce between Brabham and BMW and in Montreal [in 1982], where prior to that Nelson hadn’t qualified in Detroit, and Riccardo Patrese wanted to drive the Ford car, Nelson actually won BMW its first race and Patrese finished second.

“That goes to show the determination from Nelson to make that BMW work after a year of just blowing up engines etc etc.”

In 1985 when Brabham was lumbered with Pirelli tyres, and in ‘87 developing Williams’ active suspension, the story was the same.

“All the time he had a competitive car he was he was a fighter,” Blash says, “Nelson definitely wasn’t a guy to give up.”

After Williams there were two years at Lotus where his reputation sank further. “Obviously with Lotus they didn’t have the car,” Blash notes. And, in that strange F1 way, Piquet’s reputation suffered by association.

But then for 1990 Piquet moved to Benetton and had an Indian Summer, demonstrating that his talent remained. Then though towards the end of ‘91 Michael Schumacher joined him, and Piquet struggled to keep up.

“I’m more than happy to say that he was past his best at that particular point,” Blash concludes. Perhaps history repeated itself too that, just as with Mansell, we didn’t appreciate at the time how good Schumacher was.

Perhaps too it’s time we appreciate how good Piquet was.