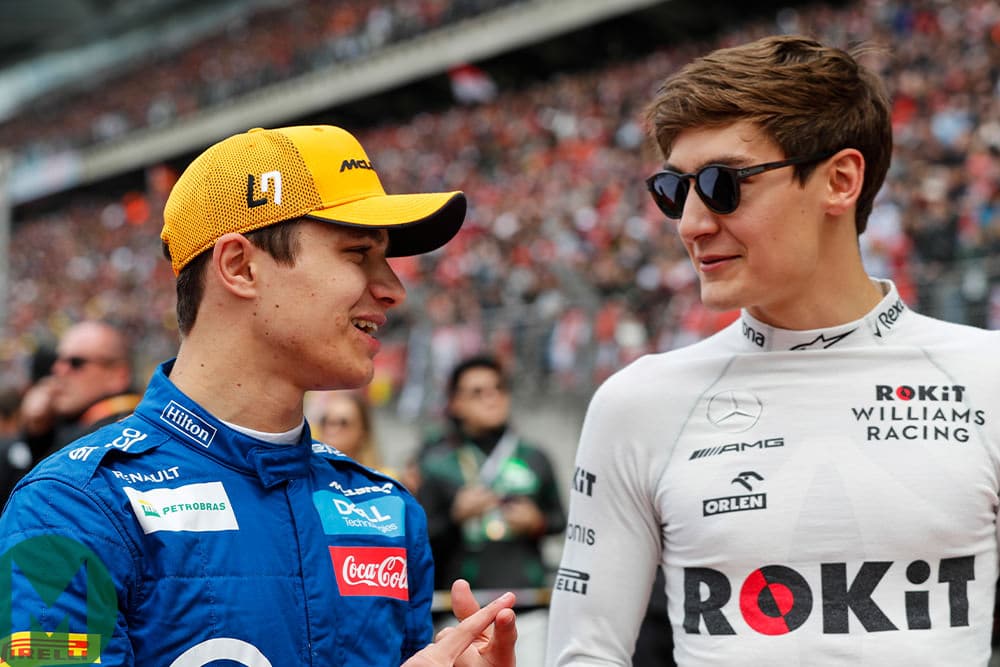 Twelve months ago, the Azerbaijan Formula 1 Grand Prix weekend was a very different proposition for Lando Norris and George Russell.

Two of the hottest properties outside F1 at the time, the pair arrived in Baku with their eyes set firmly on the Formula 2 championship, Norris the early leader after a strong start in Bahrain. Russell had shown his pace in the opening round, too, but reliability issues had left him 29 points behind Norris already.

In Azerbaijan, they were again closely matched in qualifying but this time behind polesitter Alexander Albon, and after a chaotic weekend it was Norris who continued to lead the standings as Russell’s sprint race victory still didn’t move him into the top five.

After that weekend, Russell went on to provide a sublime title campaign and win the championship ahead of Norris and Albon, and all three stepped up to F1 this season. It’s an exciting crop of talent, and, as Albon races under the Thai flag, Norris and Russell constitute the next big British hopes.

Even in vastly different machinery, they are saying and doing the right things so far.

More: Räikkönen vs Giovinazzi? Not quite…

For the reigning F2 champion, the weekend was already off to a tricky start even before he’d sat in a car, with Russell missing part of his Thursday schedule due to an illness that he had been struggling with for around a week. The flare-up meant he missed the main press conference in order to be fully fit for FP1, but then on just his third lap of the opening practice session, things went from bad to worse.

A loose manhole cover on the straight towards Turn Three punched a hole in Russell’s chassis and – aside from giving him a fright – ruled him out of the rest of the day’s running while the team built the spare and had it scrutineered.If anything was going to knock a driver’s confidence, that was it. As talented and as relaxed these rookies seem to be, they are still finding their feet when it comes to the world of Formula 1.

“The biggest takeaway is probably confidence in myself,” Norris said of his first three races. “That’s the thing I probably struggled with the most going to Australia. It was much better going to Bahrain, much more relaxed and enjoying it a lot more.

“I enjoyed Australia but I was so tense, thinking about so many things, I couldn’t enjoy it as much as I wanted to. Didn’t make it as fun as Bahrain or China. I think confidence in knowing I can do a good enough job.

“It’s always a bonus to do it. It’s not like I had to do it or something but if there is an opportunity to do it I need to make the most of it and make sure I am there to maximise that opportunity … it’s good that I’ve done well for people on the outside but also for my own confidence from knowing I can do the job, which is mainly from the job I did in Bahrain. It’s important but it wasn’t the end of the world if it didn’t happen.”

Norris has clearly become more comfortable since the start of the season, and he has the bonus of a competitive car and highly-rated team-mate to show what he can do. Baku was the prime example as he delivered in qualifying – reaching Q3 for the third time in four races – and then drove a mature race that belied his experience of just three previous F1 starts.

In the closing stages, with Carlos Sainz directly behind him, Norris accepted a gamble that ended up costing him points but not the team. A late stop for fresh tyres to try and find a way past Sergio Pérez was worth the risk, and there was no ego at play afterwards.

“I’m happy,” Norris said. “As a team we didn’t win or lose points from where we were before the stop. We just wanted something to see if we could have a bigger advantage over Checo [Pérez] to get ahead as we didn’t have the straight line speed to pass him. Wasn’t a win or a loss in the end, just swapped positions basically. I’m happy with seventh and eighth, good points for the team.”

It’s the right approach, because Norris is in a team that appears to be on the up, even if it’s just a gradual improvement, and it’s a good place for him to be gaining valuable experience.

Sadly the same can’t be said for Russell, but he remains in credit. His performances in F2 are still fresh in the memory, and he’s doing all he possibly can by beating team-mate Robert Kubica on every occasion so far. But for now, his role is different, as he has to rally the troops and show he can help lead a team out of such a difficult situation.

“It was as good as could be really,” Russell said of Baku. “We knew coming into the weekend that it would probably be the hardest weekend of the year for us… I was quite relieved for the weekend to be over. Eyes on Barcelona.

“It’s definitely going to get easier from now on in. I’ve got confidence that we are going to make progress. The team is working extremely hard, we’ve got some quite exciting things in the pipeline. How close that will bring us to the pack we don’t know, but like I said these weekends are definitely making us stronger and I do believe that at some point we will be able to [show more].”

Russell waits patiently for that chance, but all the signs from both rookies after their first four races are that they’ll get plenty more of them.