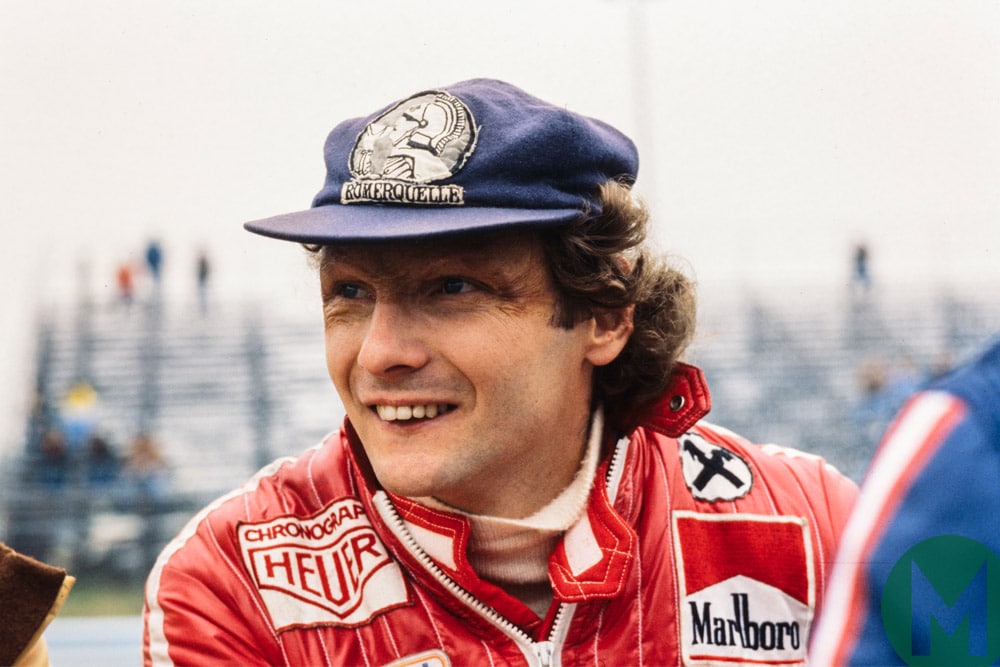 Extraordinary will forever be too weak a description. As a racing driver Niki Lauda was exceptional, as three world titles attest, but as a human being he was arguably even more so. His passing on May 20 will be felt far beyond the sport he graced.

His reputation is that of a cerebral, calculating champion, who understood that winning races was not necessarily the key to securing a bigger prize. In two of his three title seasons – 1977 and 1984 – he scored fewer victories than at least one of the rivals he beat, yet accumulated more points. Such shrewd methodology contrasts sharply with the kind of financial risks the younger Lauda took to secure himself a seat at motor racing’s top table.

Born into a wealthy Viennese family, Lauda gained a taste for matters mechanical while driving tractors around his grandfather Hans’s factory grounds. As a teenager he had the means to purchase a Mini Cooper S, with which he contested local hillclimbs from 1968, and he soon began to taste success in sports and saloon cars – taking the Bosch Racing Team’s Porsche 908 to victory at Diepholz in 1970. That led to an invitation to race for BRT in the 1971 European F2 Championship – and he also made his F1 debut that summer, in an uncompetitive March underwritten by the Austrian GP organisers, who wanted a local driver on their grid.

For 1972 March offered him a dual F1 and F2 programme, which involved a huge bank loan – and the first he tried to secure was turned down… because Lauda’s grandfather, no fan of motor racing, was on the board that needed to approve such deals. Undeterred, Lauda borrowed from elsewhere and pressed on. “If I wanted to get into F1,” he said, “I had no choice…” 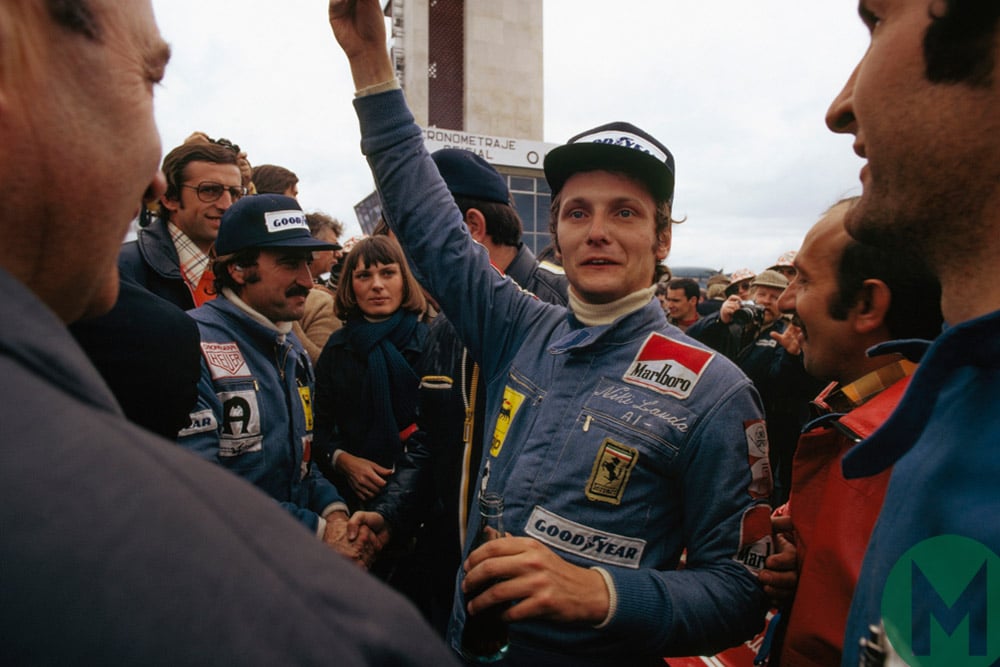 The March 721 was fairly hopeless, but Lauda won that season’s British F2 Championship, finished fifth in its European counterpart and continued to perform well in his occasional sports and saloon outings. Late in the year, with his loan still not repaid, he learned that March would be unable to run him in ’73, but managed to persuade BRM boss Louis Stanley to hire him on the basis of a deferred payment from a non-existent sponsor. His performances during the early part of the campaign – notably running as high as third in Monaco – persuaded Stanley to let him keep the drive for free, so long as he committed to a deal for 1974, and also caught the attention of Enzo Ferrari.

Once he’d been disentangled from his BRM paperwork, he was free to join the Scuderia – and start settling his debts.

Without a world title since John Surtees’s coronation in 1964, Ferrari had been through something of a lean spell – three GP wins in three seasons prior to Lauda’s recruitment – but the cocktail of the Austrian, team manager Luca di Montezemolo and design genius Mauro Forghieri sparked a turnaround early in ’74. Lauda won his fourth race for the team, in Spain, was in title contention prior to a late string of retirements and then dominated proceedings the following season, taking five wins in the new 312T, along with the championship. 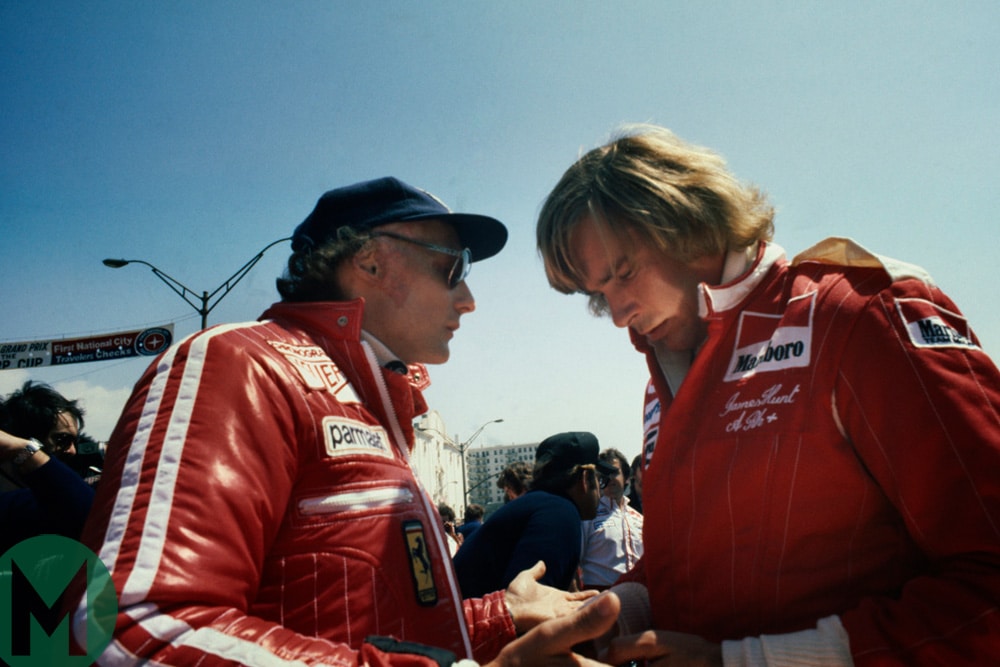 Back-to-back wins at the beginning of 1976 promised more of the same, but this would be the year that forged the Lauda legend. During a season notable for controversies on and off the track, Lauda was grievously injured in a fiery accident during the German GP and subsequently received the last rites… yet six weeks later he was back behind the wheel, finishing fourth at Monza in a Nomex balaclava bloodied by his unhealed wounds.

His temporary absence had allowed James Hunt to reduce his championship deficit and the title distilled to a showdown in Japan, at the foot of Mount Fuji. After a delayed start due to adverse weather, Lauda completed just one lap in the murk before deciding conditions weren’t fit for purpose. Hunt went on to take the third place he needed, but Lauda insisted he never had any regrets about his decision to stop. “As it was starting to get darker, the organisers said, ‘Right, we have to race now because of TV.’ I thought it was idiotic – why hadn’t we started earlier when the light was better, because the rain was no different? This stupidity, because of TV, meant conditions were wholly unacceptable.  And anyway, I didn’t lose the championship because of Fuji – I lost it because I missed three races after my accident…”

One year later he would be champion for a second time, but then quit Ferrari – the wrong decision, he later conceded – for two seasons with Brabham, towards the end of which (during practice for the Canadian GP, to be precise) he decided he’d had enough of motor racing and walked away to focus on building his airline business.

In 1979 Lauda had also won the BMW Procar title for Ron Dennis’s Project 4 and two years later Dennis, by now in charge of McLaren, was making overtures to the double champion about a potential F1 return. Lauda agreed terms for ’82, won the third race of his comeback season, at Long Beach… and from 1984 found himself once again in F1’s quickest car, the TAG turbo-powered McLaren MP4/2, alongside Alain Prost. “F**k me he was fast,” Lauda recalled. “I realised I wasn’t going to beat him in qualifying and decided I had to try something else. So from Friday I worked on race set-ups and on Sunday I was generally in better shape, could look after the tyres and so on.”

Prost won seven races to Lauda’s five, but the Austrian took the title by half a point. He would score one more GP victory, his 25th, at Zandvoort in ’85, but retired at the season’s end to concentrate on his business interests – although he remained a familiar presence in the F1 paddock, where his analytical nous and forthright opinions made him a popular TV pundit.

He accepted a consultancy role with Ferrari during the mid-1990s, had a fruitless management spell with Jaguar Racing from 2001-02 and enjoyed rather greater success after Mercedes appointed him as non-executive chairman of its F1 team in 2012. It was Lauda that did most of the negotiating with Lewis Hamilton that year, while trying to persuade the Englishman to defect from McLaren – another of his legacies, albeit one that remains unfinished.

Niki Lauda remained true to the period in which he evolved as a racing driver. Happy in a comfortable pullover and jeans, he was a refreshing antidote to the occasionally overbearing corporate gloss of modern F1 – and a straight question would ever receive a straight answer.

It’s hard to believe the sport will ever be graced by another quite like him.

He was a great man.

Motor Sport extends its condolences to the family, friends and fans of Niki Lauda