Max Verstappen had a lot of pressure on his shoulders when his home grand prix finally returned to the calendar after a COVID-enforced delay. The weight of expectation from his home fans; a championship lead lost prior to the summer break; and once the lights went out the two-pronged Mercedes attack added up.

And he didn’t show the slightest hint of it even registering.

“I’ve been always very focused, I know I have to focus on the driving, that has been quite straightforward,” Verstappen says. “But of course naturally there are more distractions especially on the grid or when you drive out there’s more of a crowd, but we are professional enough to focus on our job once we are in the car.”

From the first laps that were turned on Friday, Verstappen looked like a man who was already pre-destined to win this race. The huge, vocal support was almost propelling him to times that his rivals couldn’t match.

That’s far too romantic a notion, of course. The Red Bull was simply a quicker car and Verstappen driving it beautifully, evidenced by the fact he still took pole position despite his DRS not working at the end of his final lap. 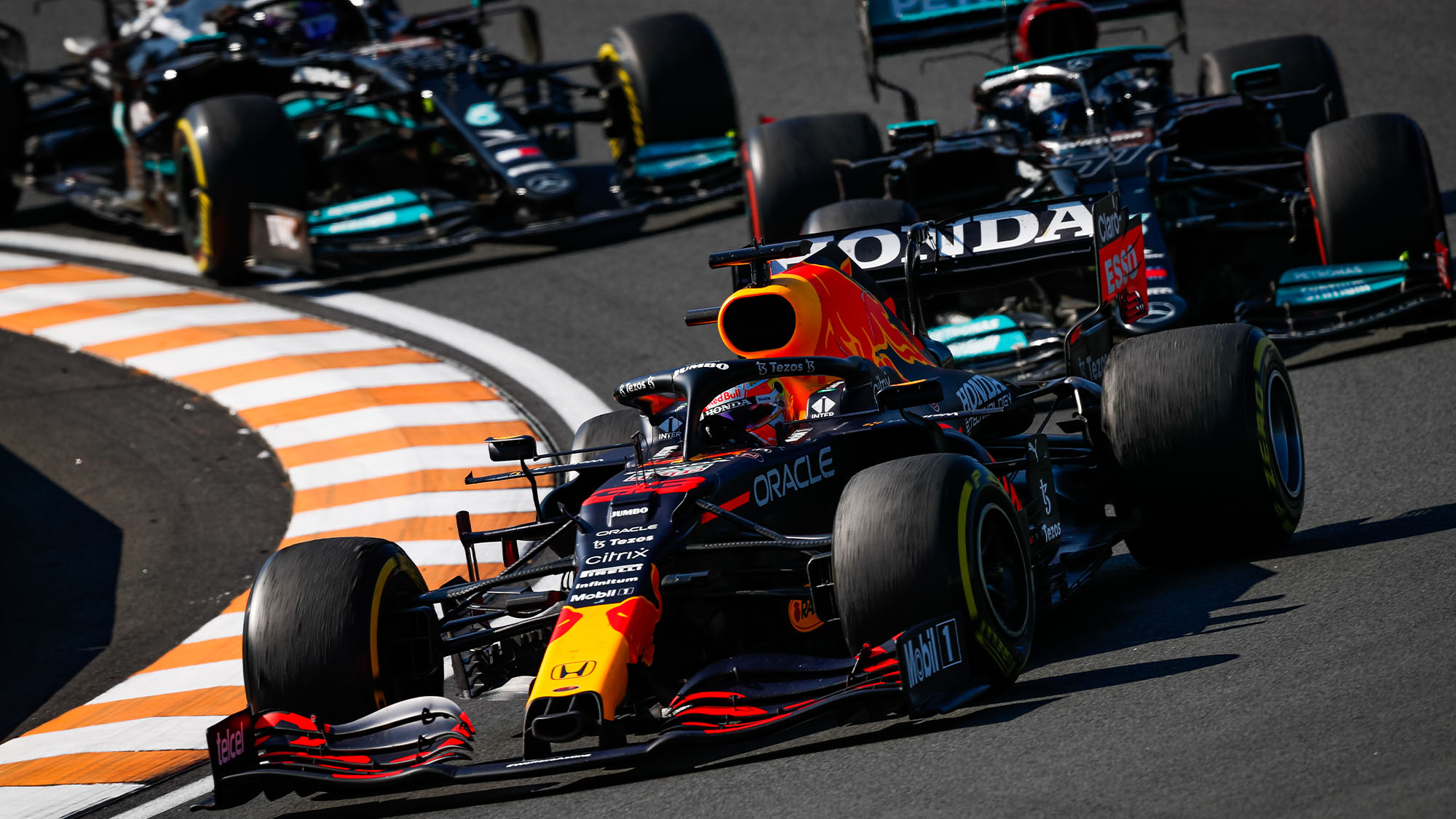 Verstappen converted pole into the lead, always keeping both Mercedes at arm’s length

From the moment the constant party music was finally cut and the lights went out – just about visible through the orange haze created by numerous smoke bombs at a sun-drenched Zandvoort – Verstappen had the race under control. He retained the lead with ease, pulled a gap of 1.7 seconds on the opening lap and then kept Lewis Hamilton out of striking distance.

It was a remarkably clean opening at a track that looked nearly impossible to overtake on, with the narrow and unique opening sector – including the banked Turn 3 – seeing little in the way of drama. Though it was a close-run thing…

George Russell nearly ran into the back of Fernando Alonso, who in turn went round the outside of Esteban Ocon and Antonio Giovinazzi at Turn 3. The Spaniard then so nearly lost the car at the high-speed Turn 6, inadvertently forcing Giovinazzi to take evasive action to avoid a plane crash, before Mick Schumacher similarly had to back out after Haas team-mate Nikita Mazepin blocked him on the pit straight.

From there things settled down, though Sergio Perez continued to make life hard for himself after locking up his hard tyres behind Nikita Mazepin just eight laps into a race he had started from the pit lane due to a power unit change.

“A lot of risk had to be taken, and it was a race really complicated a lot with Nikita at the beginning because I flat-spotted my tyres,” Perez said. “He moved really late under braking and just to avoid him I flat-spot my tyres, I had to come in and basically start again.”

We should be grateful for Perez’s challenge, however, as he provided the majority of the entertainment in terms of overtaking. Cars were cleared on both the inside and outside of Turn 1 and Turn 11, and he rose into the points before his second stop.

But he wasn’t alone in making two stops, as the Mexican’s qualifying woes meant Mercedes could mount an attack on multiple fronts to try and deny Verstappen his fairytale. Having seen the potential of the Red Bull, Hamilton pushed on to stay in touch while Valtteri Bottas conserved his tyres to attempt a one-stop. Hamilton came in on lap 20 to try and undercut Verstappen but a 3.6sec stop – 0.9sec slower than Verstappen – left him out of range. 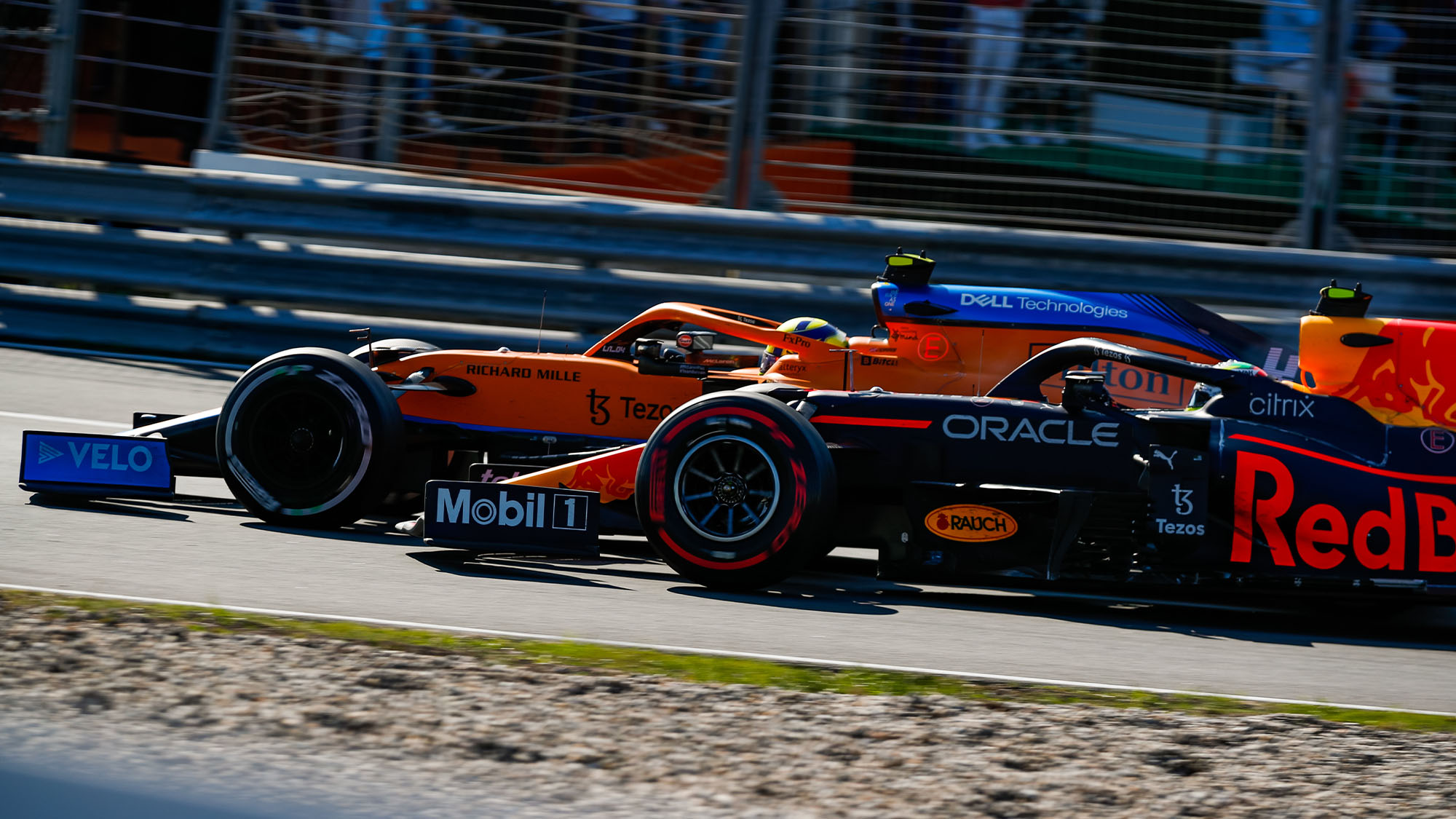 Sergio Perez provided the most entertainment as he climbed the leaderboard, before colliding with Norris

“There wasn’t a lot I could do to answer the lap times he was doing in stint one already, it was very hard to keep up, and I think Max was just managing whereas I was flat out just trying to stay as close as possible,” Hamilton admitted.

That wasn’t his only shot, though. There was still Bottas to factor in, who was now in the lead and potentially a major headache given how tough it could be to overtake.

“It’s going to be absolutely critical to catch and pass if we can,” Verstappen was told on team radio. But Bottas put up little resistance, running slightly deep at Turn 11 to allow the home favourite to follow closely through the final corners and breeze by with DRS, in the sort of meek display under pressure that surely played on Mercedes’ mind when deciding his future.

Alonso recovered from his early scares to chase down Carlos Sainz and snatch sixth, although the other Alpine lost a position late on as Perez got Esteban Ocon for eighth. Lando Norris rounded out the points in tenth but was fortunate to finish after contact that saw the McLaren briefly airborne out of Turn 1 and Perez with damage to his floor after an “unnecessary” collision.

But such scares were far from the leading Red Bull’s mind as Verstappen could soak up the atmosphere some 20 seconds clear of the field after the late Mercedes shenanigans. The situation belied the pressure he had been under, but then Verstappen had never showed any awareness of it until the music started up again after the chequered flag. 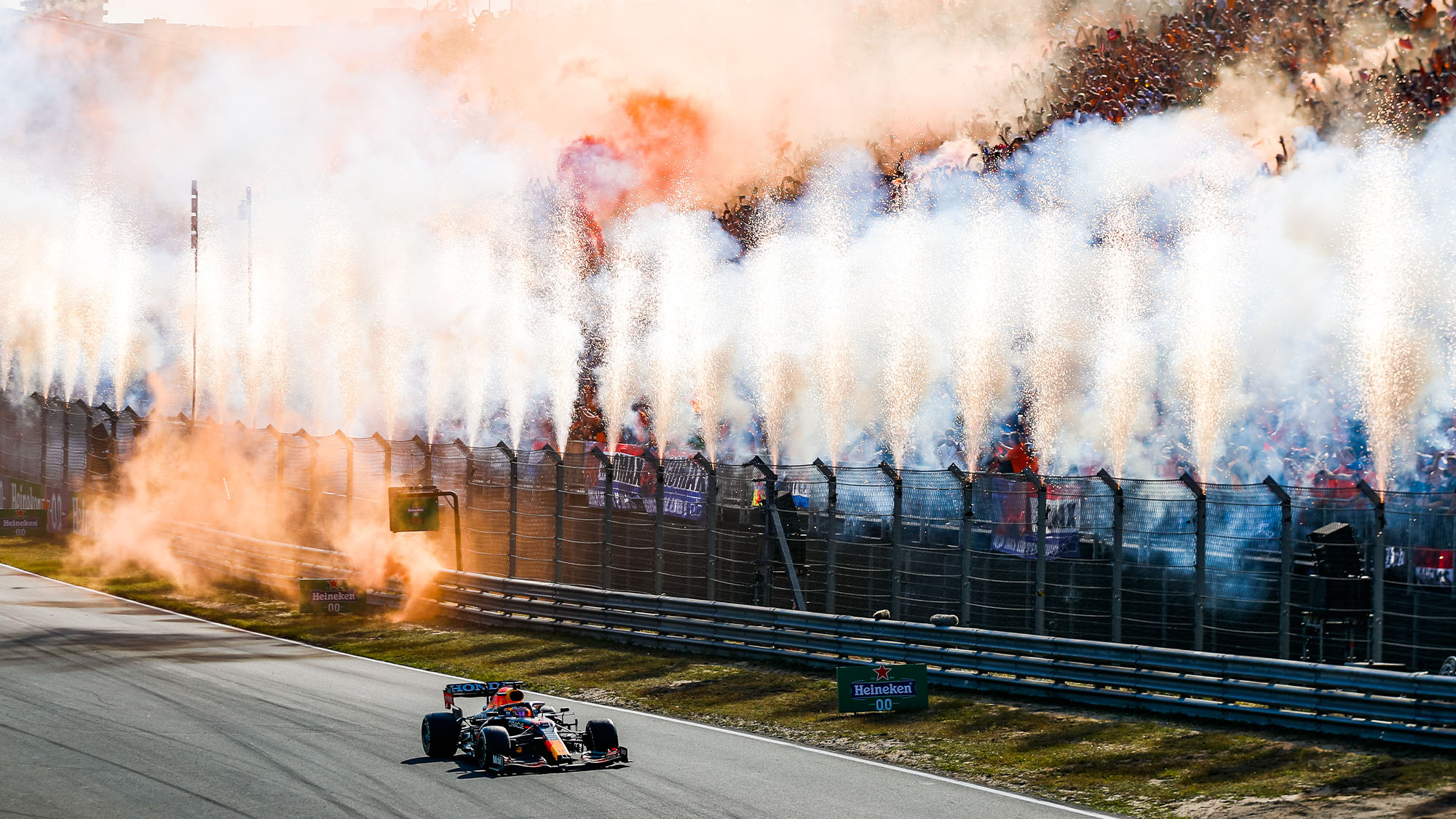 “I know the fans of course have high expectations when you come here they want you to win, but it is never that straightforward before you get here,” the new championship leader said. “You’ve seen this whole year already, Mercedes and us have been really close.

“To deliver at the end of the day, very satisfied yesterday already with pole but to win the race, what was crucial today was the start and then managing that gap so they couldn’t undercut us, but an incredible feeling to win in front of the fans, the [Dutch] King was watching as well with the family, an amazing day.”

Tens of thousands will echo Verstappen’s comments after a hugely successful return for Zandvoort, one that instantly marks it out as a highlight on the calendar.