Patrick Head has warned that Williams is in a fight for survival after years without the technical leadership that it needs.

In the latest Motor Sport podcast, the co-founder of the team says that Williams cannot survive by running at the back of the grid as it has done in the last two seasons, and that it needs to compete in the midfield this year.

Earlier this month, Williams announced that it is looking for additional funding, which may include selling the entire company that Head formed with Frank Williams in 1977.

After a haul of nine constructors’ championships won in the 1980s and 1990s, Head describes the team’s current situation as “sad”.

“You cannot run an F1 commercially finishing tenth out of ten consistently,” he says.

“For this year it’s very important they get back in the hunt. I’m not naive enough to think they will be battling with the top three teams but I hope they will be in amongst what would be called the lower midfield. From there they have to work their way back and upwards. 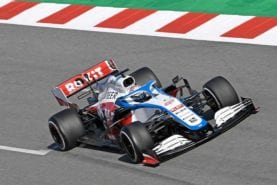 Williams is considering selling the company, including its Formula 1 team, after posting a £13m loss last year and terminating its sponsorship deal with ROKiT. A year spent trailing at…

Head returned to Williams in a short-term consultancy role last season. He praises deputy team principal Claire Williams for the work that she has done in “putting together a significant budget for this year”, despite the results of the past two seasons, and blames a lack of technical leadership for the current woes.

“There are some fantastic and good people there,” he says. “For various reasons, without necessarily wanting to say that the people are bad, they have had a stream of technical leaders, some of whom had skills but have not been appropriate for leading a company like Williams and steadily, they are struggling to stay alive at the moment.

“They need technical leadership there.”

After years of stability and success, Williams has struggled to find a long-term technical director in the past decade. Mike Coughlan had only been in the role for two years when he was replaced by Pat Symonds, mid-way through a 2013 season in which the team scored just five points.

Symonds oversaw a resurgence in its fortunes, as new regulations and a switch to Mercedes engines saw the team finish third in the championship in 2014 and 2015.

He left at the end of 2016 and Paddy Lowe’s term as chief technical officer began, following success at Mercedes.

In 2018, the team slumped to last place in the championship with seven points. Lowe left in 2019, shortly after the new car was late to the first testing session of the season.

Head praised two hirings announced earlier this year, describing them as “good guys”. David Warner has joined from Red Bull as chief designer, along with Jonathan Carter, formerly at Renault, who is deputy chief designer.

Listen to the full podcast below, which includes Head’s recollections of working with Nigel Mansell and Alain Prost, plus a detailed account of the Williams-Honda years.