Racing Point has confirmed that Sergio Perez is in line to return for this weekend’s 70th Anniversary Grand Prix, thanks to a technicality that means he has completed his quarantine period.

The team said in a statement that the Mexican had satisfied Public Health England’s self-isolation measures. He is now awaiting the results of a re-test.

If negative, he would be able to compete in F1’s 70th Anniversary Grand Prix, but Nico Hülkenberg remains at Silverstone and will race again this weekend if Perez cannot.

“Public Health England have confirmed that Sergio Perez’s period of quarantine has been completed,” a team statement read. 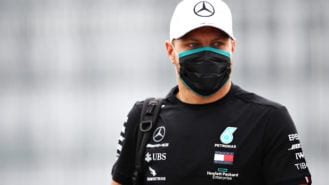 Valtteri Bottas will remain with Mercedes next season after the team confirmed the Finn has signed a new one-year deal for 2021. The 30-year-old has been with Mercedes since 2017,…

“In line with the FIA Code Of Conduct, Sergio requires a verified negative test result for Covid-19 before he can enter the paddock. The testing process is taking place today.

“The team expects to make a decision on who is driving alongside Lance later today or first thing tomorrow morning.”

Perez was tested for coronavirus last Wednesday, ahead of the British Grand Prix. The result was announced the following day as inconclusive and the Mexican driver was re-tested and immediately isolated himself.

As this was happening on Thursday, the British government increased the quarantine period for anyone testing positive for Covid-19 from seven days to ten.

Perez’s positive result ruled him out of last weekend’s race but it has since been unclear whether he would also be forced to miss the second Silverstone Grand Prix because of the quarantine change.

Today’s statement suggests that Perez’s quarantine was seen to officially begin from his inconclusive test, so he beat the cut-off for a seven-day self-isolation rather than ten.

In the wake of Perez’s quarantine, Hülkenberg was lined up and travelled to Silverstone, underwent his own Covid-19 test and had a seat fitting at the Racing Point factory in under 12 hours of Perez’s positive test.

Unfortunately for the German, his Formula 1 return was cut short after an issue on fire-up ahead of last Sunday’s race which the team could not fix in time for him to take the start.