A Formula 1 race without Lewis Hamilton for the first time since 2006, and therefore without this season’s already-crowned drivers’ champion, but in his absence F1 still delivered something special.

While the circumstances were far from ideal and Hamilton is wished a speedy recovery from Covid-19, his absence created a whole new dynamic at Mercedes and a ripple effect across the whole grid. It wasn’t just about George Russell and Valtteri Bottas, or about Jack Aitken stepping in at Williams, but Hamilton has been imperious this year and suddenly Mercedes were vulnerable, with Max Verstappen waiting to pounce.

It resulted in a hugely dramatic night under the lights on Bahrain’s outer circuit.

When the Verstappen threat was eliminated at the fourth corner – an innocent victim as Charles Leclerc hit Sergio Perez, leaving Verstappen nowhere to go except wide into the barrier – suddenly Mercedes looked set for a cruise to victory, with their only headache being the fact Russell had taken the lead from Bottas at the start and the Finn was going to try and fight back hard. 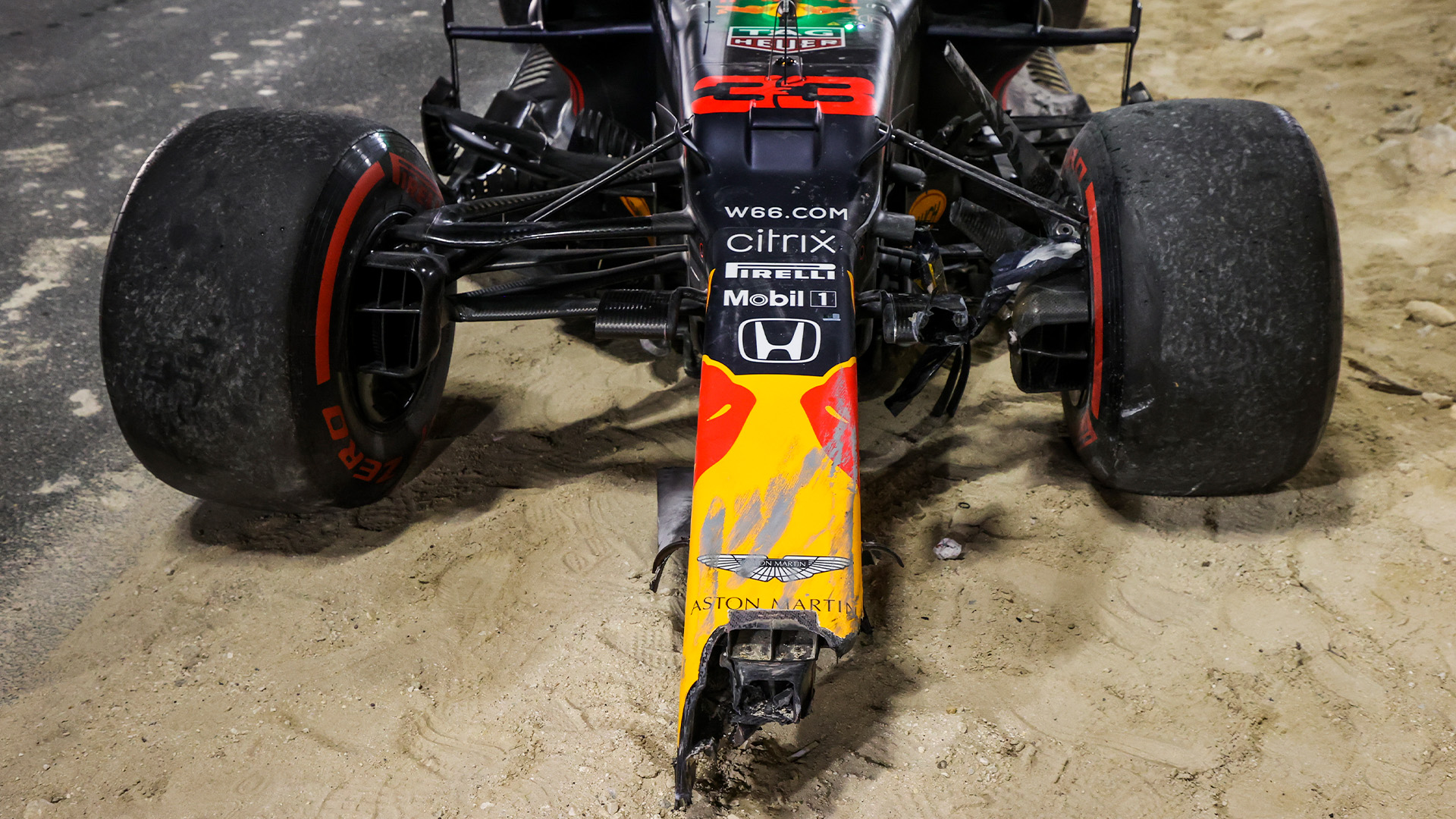 “I have lots of respect for Charles but I don’t understand why guys were being really aggressive.” Verstappen said. “It was like it was the last lap of the race. I know he wants to overtake a car but braking so late on the dirty inside of the track…”

Russell didn’t need to be overly aggressive himself as he got down the inside of Bottas at Turn One, and from then on he looked like he had been in the Mercedes for years. He edged away from the Finn and appeared to have everything under control, even if Bottas started to close the gap on the hard compound tyre after both drivers ran long on the mediums and looked set to comfortably execute a one-stop strategy.

And then, ironically, Russell’s replacement triggered disaster for Mercedes.

Aitken’s Williams team-mate Nicholas Latifi had already retired from a strong position but the debutant was doing an extremely impressive job himself as he closed in on Kevin Magnussen ahead. But Aitken pushed that bit too far, spun out of the final corner and wiped off his front wing.

The safety car was needed so the wing could be recovered safely as there were few gaps on such a short track, and Mercedes called both drivers into the pits for a double stop. The problem was, as the call went to the mechanics that Russell was going to lead Bottas in, Russell himself sent in a radio message that interrupted it, and the wrong tyres ended up on his car.

With some of Bottas’ mediums put on, Russell went back out and the Finn sat stationary for what felt like an age as Mercedes realised the error and replaced his tyres with the same set he’d come in on. 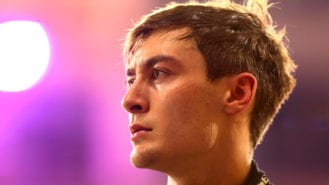 “What’s the feeling when you come into the pits and then you leave it with the same old tyres that you came in and lose positions?” Bottas said. “Obviously, a big mistake from the team that will analyze and learn from. I think that was the main thing. Then it was a nightmare, I was on the old hard tyre, that had already lost a lot of temperature in the pit stop, against the guys that were on fresh medium tyres, so I was like a sitting duck. It was a pretty nightmarish situation.”

Russell was called back in immediately but his saving grace was the field was still behind the safety car, so he was able to rejoin in sixth behind his team-mate, now on the correct tyres.

Still, he would have to charge through the field against some quick cars, and when you looked at the timing screens to work out who had benefited it was… Perez?!

Stopping at the end of the first lap to fit medium tyres and check for damage, Perez rejoined the back of the pack under the initial safety car and then scythed his way into contention. One-stopping from that point on, he switched to hard tyres with 40 laps remaining and had cleared both his team-mate Lance Stroll and Esteban Ocon by the time the Mercedes calamity struck.

“I think after what happened in Imola, when we did the wrong choice under the safety car, we were clear what we wanted to do here,” Perez said. “We were staying out. We were fairly confident I was going to be able to restart on tyres and to be able to go to the end of with good pace.

Russell was on a mission. This had been his race to win and he knew Bottas was on the back foot, so when he brilliantly went round the outside of the other Mercedes at Turn Six, a huge wave of belief hit those watching that he was going to go and win it anyway.

After Bottas, Russell quickly cleared Carlos Sainz, then Stroll, then Ocon. He had Perez in his sights, even if the Racing Point driver was confident he could hold on. But then, another dreaded radio message: Puncture.

“I could feel something a little bit weird with the car but when the call came I really didn’t want to believe it,” Russell said. “I have had races where I have had victories taken away from me. But twice! I just could not believe that.

“I gave it everything I had. I was managing the race from the start. I felt confident, comfortable in the opening laps, just managing the gap to Valtteri.

“Then we had the muddle up in the pit stop. That put us on the back foot. I had to overtake, and then obviously I think we still could’ve still caught Sergio. We had such a tyre advantage; the car was so quick. Gutted but incredibly proud of what we’ve achieved. And happy to have had the opportunity.”

He still charged through to ninth and set the fastest lap to take his first points, but somehow a fairytale win had slipped away. Still, the man profiting deserved his slice of luck.

That Perez is without a seat next year is a travesty, and he was robbed of a podium in the final laps a week ago. This time, he wasn’t to be denied and he cruised home for a maiden victory, one that even Russell said the Mexican deserves given the career he has had to date.

“I’m a bit shocked, to be honest,” Perez admitted. “I don’t find the words. I’m a bit in limbo. As a driver you dream for this time, to be in this position, for so many years. Basically I worked my whole life for a moment like this, so to finally achieve it… it’s difficult to digest. I think it will take a couple of days. But I think it is something incredible.

“Especially coming back from last weekend when it was a very disappointing day for us, when we should have been in the podium… the last couple of races really we should have been on the podium. But we didn’t give up, especially after Lap One. We got knocked out again. I don’t really know what happened, I was already doing the corner and I got hit badly from behind so I thought the race was over again. But we managed to come back.”

It was a win set up by some excellent moves – passing both Ocon and Stroll on track – and it only strengthens his case to replace Alex Albon after the sole remaining Red Bull could only fight to sixth place behind Sainz and Daniel Ricciardo. For once the second Renault on track, Ricciardo was pleased for his team-mate but felt a win slipped away, while Ocon couldn’t hide his own emotions after climbing from 11th to second.

“I cried on the line, that’s how much emotion is going through my mind actually now,” Ocon said. “It’s been a tough season on our side. It hasn’t paid off all the time but we never stopped pushing. We kept working hard, we kept staying motivated. That was very important. At the moment where less and less people are believing in you, it’s important to believe in yourself and today we made it happen and I’m very pleased with it. It’s hard work but it has paid off.

He’s right there. Whether Hamilton is back in Abu Dhabi remains to be seen, and the grid will always be a better place with the most successful driver in history on it, but we’ve now had a glimpse at a parallel universe where he isn’t, and it’s still exciting.