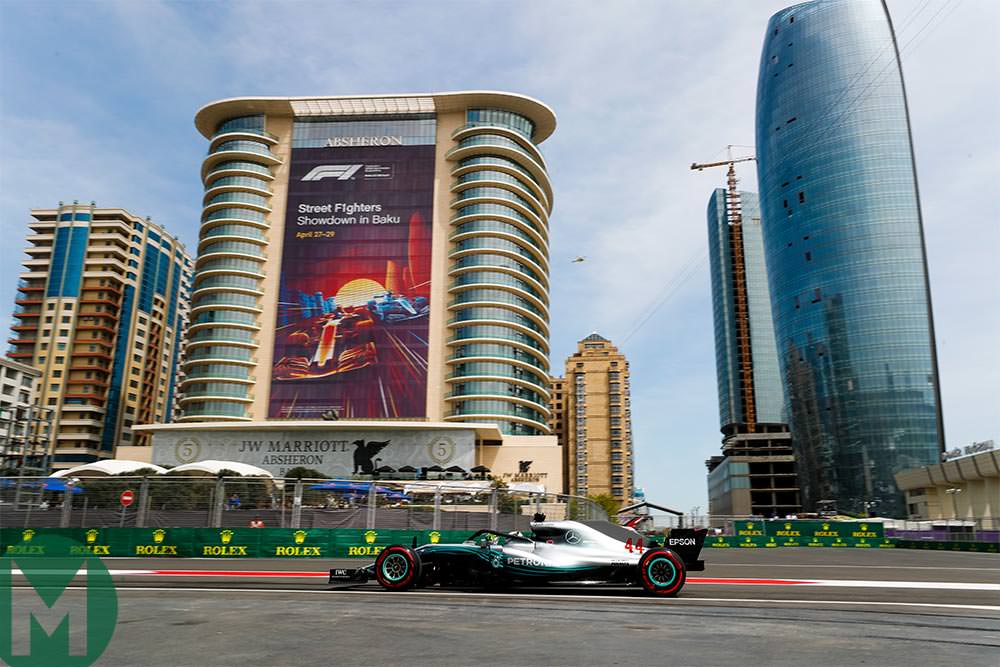 Pirelli has tried to encourage two-stop rather than one-stop strategies this year. In doing so, the sole Formula 1 tyre supplier has made its compound range significantly softer, and the ultrasoft it has brought as its softest tyre for the Azerbaijan Grand Prix is two steps softer than anything that has been run here in the previous two rounds. This looks like having a profound effect on the shape of the race – but probably not in the way originally envisaged when the tyre choices were made.

Unsurprisingly, the ultrasoft has proved a tricky tyre to get the best from – but most teams committed heavily to it in their preseason choices. It has left several of them with only a meagre stock of the tyre that looks more robust, the super-soft. This has shaped the run plans of everyone, in particular Ferrari’s Kimi Räikkönen and Mercedes’ Lewis Hamilton, both of whom came into the second session with just one set of the tyre that they may well be planning to use in Q2 and the first stint of the race, in order to avoid the troublesome ultrasoft.

The rear ultrasofts were giving up after a few as five laps on some cars (notably the Mercedes) but were, at best, only a couple of tenths faster than the much more durable supersofts over a qualifying lap. It would seem logical that all of the Ferrari, Red Bulls and Mercedes will therefore use the supersoft in Q2, in order to have a decently long opening stint. It should then be possible for these fastest teams to run the race with just one stop (assuming no safety cars – never a safe assumption around a street circuit). So, the aggressive tyre choice for Baku looks like having the opposite effect to what was intended. Thus, the law of unintended consequence is set to strike F1 yet again.

That said, this looks an extremely intriguing match-up between the top cars. Daniel Ricciardo has been in scintillating form throughout the weekend to date, his Red Bull fastest in the single lap simulations in both Friday practice sessions. His team-mate Max Verstappen, on the other hand, has continued his 2018 wild run, hitting the wall in the morning and giving it a glancing blow in the afternoon too. His session ended with a possible engine problem too – so there could be grid penalties on the way.

The Ferrari looks generally to have a small edge over Mercedes as the second quickest car, Kimi Räikkönen’s in particular. It has trailed the Red Bull by only the smallest of margins – a deficit that might be expected to be overcome by the Ferrari’s more effective qualifying mode. In the morning both Räikkönen and Sebastian Vettel were struggling badly in keeping the rear ultrasofts alive and were nowhere. After a major set-up change, they were significantly better in the afternoon, but with Vettel still struggling to find an ideal one-lap balance.

At Mercedes, Valtteri Bottas continues to have a small edge over Lewis Hamilton, as often seems to be the case around low-grip tracks such as this. But it looked like this at this stage of the weekend last year – and Hamilton proceeded to pull a pole lap out of nowhere. Generally, the Mercedes was suffering more degradation on the ultra than either the Red Bull or Ferrari in FP2 – but that could turn out to be irrelevant if they run the race on a supersoft/soft combination. The averages shown above reflect the Merc’s rear ultra-tyre appetite and so that 1sec deficit may not be important. Probably of more importance will be the qualifying position – and that looks a close call between all six cars of the top three teams. Once the grid has formed, there would likely be many more strategic nuances to be considered.

Beyond the big three, Force India looks strong – as it traditionally is at this track. It appears to hold a small edge over Renault and Haas, with McLaren a little behind.

The weather forecast is for very strong windy gusts – and that could wreak havoc in the race, throwing all those carefully calculated strategies out the window.