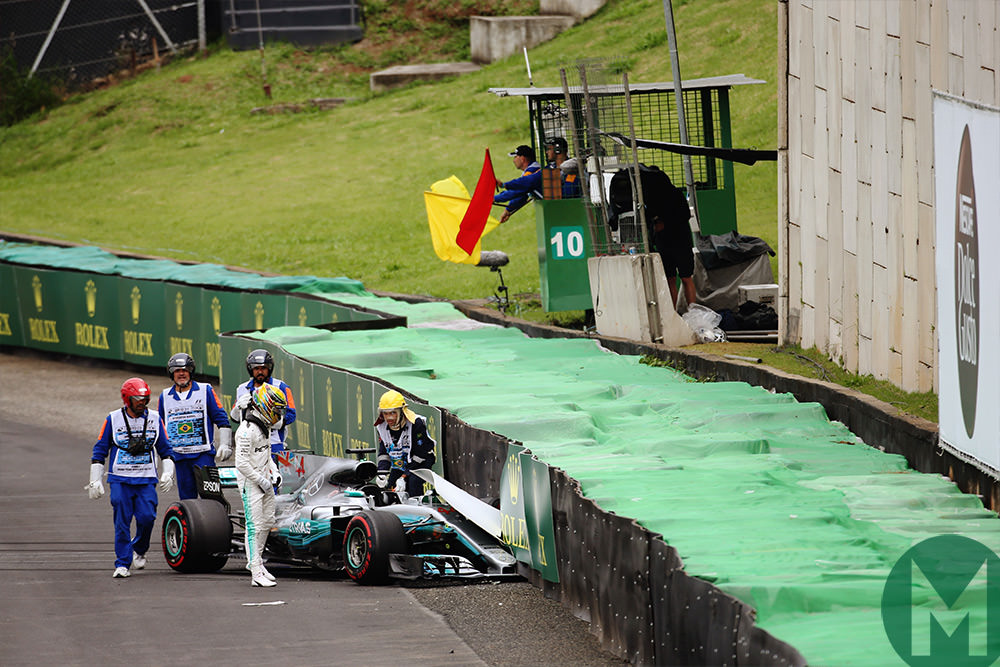 When does a glitch become a dip?

A glitch is when you push too hard, too soon and stick it in the wall.

A dip begins when your main rival – apparently in your pocket – beats you three times on the bounce.

A double-dip is when he extends it to seven the next season.

Lewis Hamilton is not the first Formula 1 world champion to suffer ‘post-title depression’: dropping your level, your car and the ball.

Alberto Ascari had won 11 of 14 GPs on his way to consecutive world championships from 1952-’53 – a sequence ended by a last-corner collision at Monza – when he felt he was being taken for granted by Enzo Ferrari.

Continual success can do that to people.

Wooed by the very ambitious Gianni Lancia for 1954, he would never win again at the highest level.

The pragmatic Jack Brabham would go almost six years without a victory after five in a row in 1960 had secured his second world title with Cooper.

Thereafter the creation and development of his eponymous team took precedence.

His successor – crowned champion in tragic circumstances at Monza in 1961 – was fighting tooth and claw against better handling cars now a match for his Ferrari in terms of power when he overheard his new team manager belittling him over the phone.

Wooed for 1963 by the extremely ambitious ATS – formed of the massed walkout from Ferrari at the end of 1961 – Phil Hill would never win again.

Even Jim Clark’s epic 1965 – six GP victories interrupted only by a groundbreaking win at Indy – ended with a whimper: non-scores in Italy, the United States and Mexico.

And his 1966 campaign was all but written off by Team Lotus boss Colin Chapman in order to concentrate on the Next Big Thing: Lotus 49, with its Ford-Cosworth DFV.

Nuggety Graham Hill worked wonders to revive a Team Lotus – the bereft Chapman in particular – reeling from the loss of Clark and win the 1968 title showdown.

Almost 40, however, and shaded by new team-mate Jochen Rindt’s speed, he ended 1969 broken in body – if not in spirit – and would not win again.

Jackie Stewart swept the first part of that season yet finished it with a collision, a retirement and a fourth. Then boardroom politics – and his determination to remain loyal to Ken Tyrrell – forced him to swap his beloved Matra for an unloved March.

And his 1972 defence would be interrupted by illness caused by a hectic schedule.

Stewart’s successor had youthful vigour on his side when he won three of the first four GPs of 1973. But the speed of new Lotus team-mate Ronnie Peterson – to which Chapman was like most of us in thrall – gradually wore Emerson Fittipaldi down.

The usually smooth Brazilian collided with Jody Scheckter in their battle for the lead at Paul Ricard – when really there was no need – then injured his ankle in a practice crash at Zandvoort.

Realigning with the less mercurial McLaren, he became world champion for a second time the following year.

Workaholic Mario Andretti was like most of us in thrall to Chapman’s genius but had to admit that they had been swept away in 1979 by wind tunnel figures that did compute on the track.

Swept aside by less ambitious/more pragmatic teams, he would not win again after a 1978 title year that ended with him being outshone by Lotus stand-in Jean-Pierre Jarier.

Nor would his successor Jody Scheckter win after Ferrari – its Michelins no longer able to compensate for a fundamental aerodynamic flaw – suffered a spectacular collapse in 1980.

The wildman-turned-businesslike South African reckoned he was driving as well as ever. Maybe so, but his efforts appeared tame compared to those of his team-mate.

One man’s knocks are another’s opportunity.

Having played the perfect wingman in 1979, Gilles Villeneuve grabbed an admittedly damaged Scuderia from a friendly rival reconsidering his future.

Having been rolled over by Michael Schumacher and Benetton in 1995, Damon Hill arrived in Adelaide for the last GP of the year refreshed in mind and body after a holiday in Bali and with a new outlook – having narrowly avoided drowning in shark-infested waters off Perth! He drove his Williams like the world champion he would become in 1996.

And having tossed – when perhaps he should have tipped – a cap at Hamilton at Austin in 2015, Nico Rosberg realised that maybe he was angrier with himself than he was with a team-mate who had twice monstered him from the lead and title race.

With nothing to lose and everything to gain, he reset his mindset and laid the foundations for a successful 2016 campaign with wins in Mexico, Brazil and Abu Dhabi – in 2015.

Hamilton’s startling recovery last Sunday suggests that his Q1 glitch at Interlagos is unlikely to descend into a dip. He’s even alluded to Michael Schumacher’s record – now ‘just’ 29 wins distant.

But can he sustain the necessary level?

Keep a great team with and around you; stay fit, focused and ahead of the technological, tactical and strategic aspects of the game.

But, having learned the hard way from 2016, he is operating now at a height few have attained.

Whereas Valtteri Bottas – even had he won at Interlagos – is not yet at Nico Rosberg’s 2016 level.

Nor has been Vettel recently – until he won at Interlagos.

Vettel knows also the deepest depths of a dip and how the grind of four world titles can do that to a person.

Victory in Abu Dhabi, therefore, would be a powerful end to the beginning of his bid to win a fifth in 2018.

‘Counting’ more for next year than this, it’s ‘double-points’ without the artificiality.