The Azerbaijan Grand Prix had a 2-2 record coming into today’s race. Twice we have seen utter drama and chaos, and twice we have endured borefests. The fifth edition did both in one go.

That’s probably an unfair reflection of how things looked early on, when pole-sitter Charles Leclerc slipped behind Lewis Hamilton but then stuck with the Mercedes, in turn allowing him to hold off Max Verstappen for a few laps. 0.8sec covered the top three and it looked like a fun day was in store.

Then Leclerc lost DRS compared to the very-fast-in-a-straight-line Mercedes, and both Verstappen and Sergio Perez – having made an excellent start to jump to fourth within three corners – quickly swept past.

It only took the first round of pit stops for Red Bull’s clear pace advantage to be displayed, when Hamilton was held in his pit box to allow Pierre Gasly to pass, and Verstappen could clearly take the lead by stopping a lap later. Perez probably should have emerged alongside his team-mate but a slow stop meant he only slotted into second place, and from there on Red Bull looked in control. 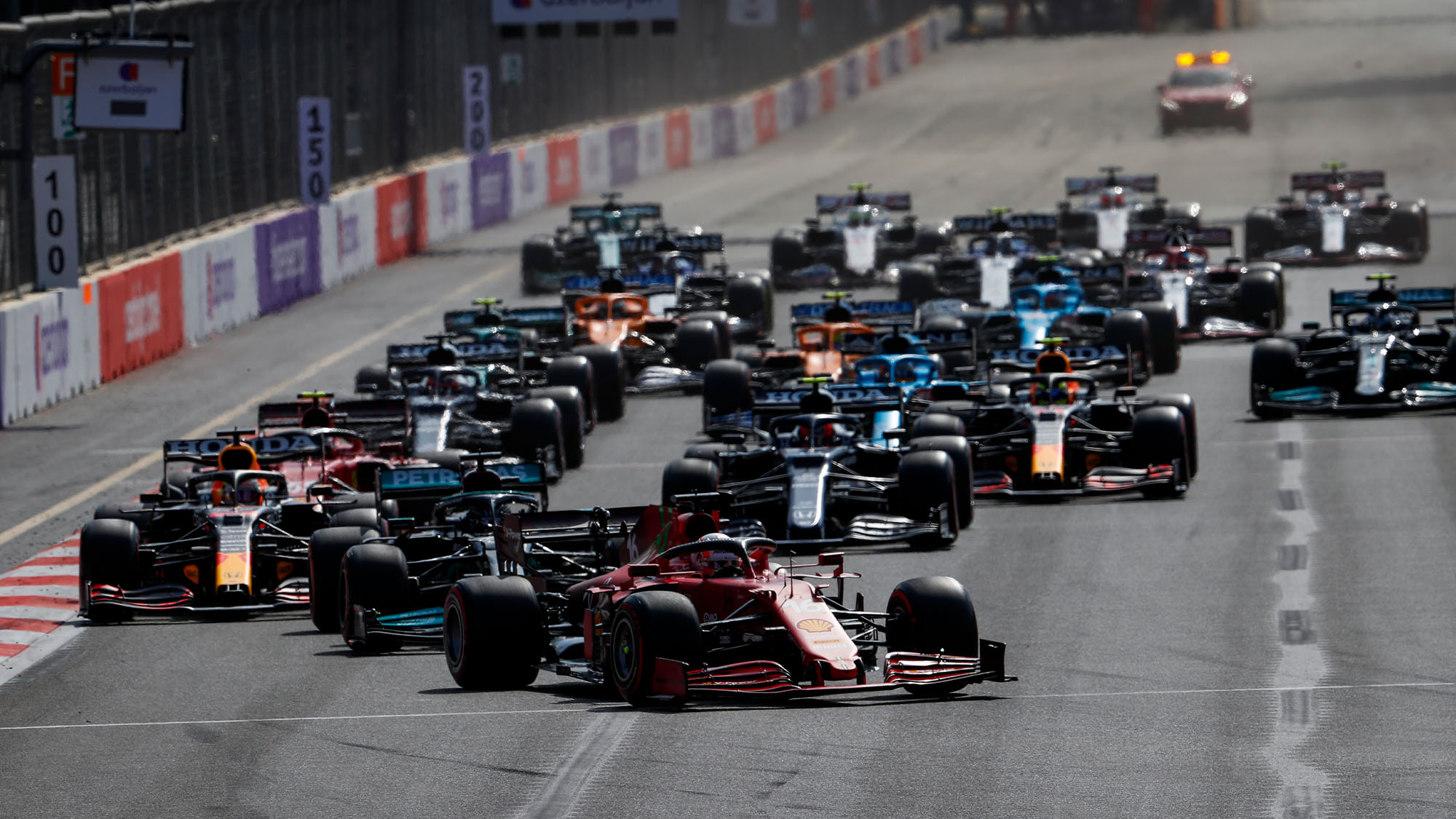 For more than half the race, it seemed like it was going to be one of the quieter Baku events, with the cars having fallen into pace order and looking after their tyres. The main bit of action revolved around Carlos Sainz, who locked up on his out lap on cold hards and went straight on at Turn Eight, reversing quickly but dropping out of the top ten.

But then Lance Stroll – running fourth after being the only driver to start on hard tyres – suffered a left rear tyre failure on the run towards the finish line and crashed heavily.

“I don’t know what happened, I just felt like the rear just let go,” said Stroll of how it felt inside the car. “It was looking quite good so it’s a shame in the end, I think we had good potential today.”

“The tyre just blew off the rim. It’s not a nice impact to have”

The potential was good for both Stroll and team-mate Sebastian Vettel, who had run longer on soft tyres to lead for five laps and had emerged in seventh, becoming sixth after the Canadian’s retirement. After a long safety car period to clear the Aston Martin – during which the pit lane was shut for some time – the race restarted with 15 laps to go and Vettel immediately cleared Leclerc on the exit of Turn One, getting Gasly for fourth place a lap later.

It was the Vettel of old, and so good to see the four-time world champion comfortable with his car, but Gasly was also being hampered by a power unit issue. Still, even that bit of drama had failed to overly spice up the race, aside from Valtteri Bottas getting a poor restart on cold tyres and dropping to 14th place, while Fernando Alonso climbed into the top ten.

Alonso’s charge was helped by pitting for soft tyres, being one of four drivers to come in as the majority were confident Stroll’s failure was not a cause for concern. How wrong they were.

With all eyes on whether Hamilton could stay close enough to Perez to try a move at any point, Verstappen eased away and was just six laps from a comfortable victory when disaster struck and he too suffered a left rear failure at 200mph approaching the finish line. The car wobbled briefly before sliding to the outside of the track and wiping the nose off against the barrier. From nowhere, the leader was out. 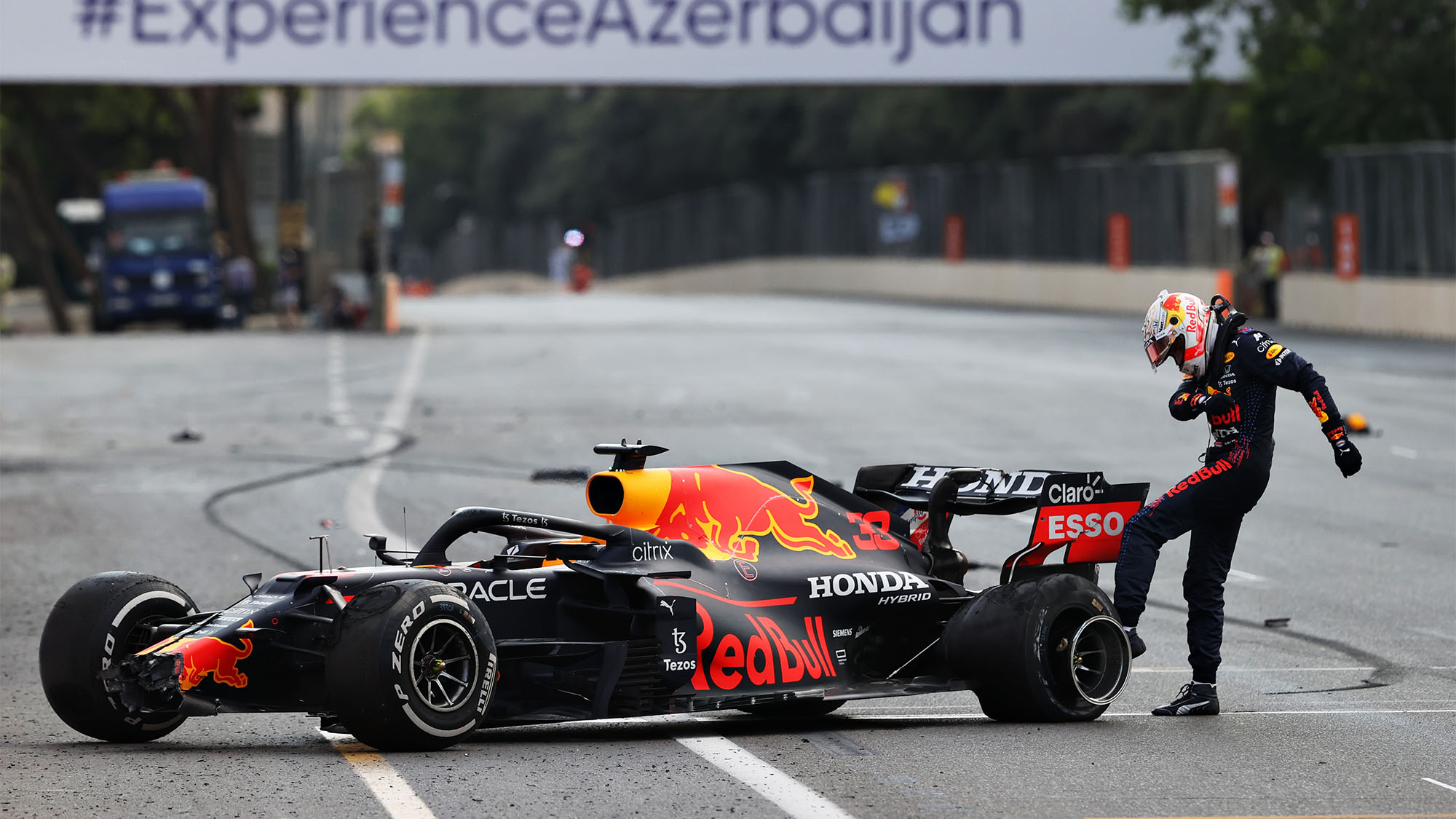 A left-rear tyre failure pitched Verstappen out at 200mph

“I didn’t feel anything up until the moment that I suddenly went to the right,” Verstappen said. “The tyre just blew off the rim. It’s not a nice impact to have. It’s quite a dangerous place to have a tyre blowout at that speed. But all fine with me, the car not so much.

“Up until then, we had a very strong race. I was basically matching the lap times that I had to do behind. We were fully in control. Of course, it’s very disappointing what happened. We lost out on a lot of points, we could have opened up that gap in the championship as well, so to have this happening, especially so close to the end, is very frustrating.”

With the safety car deployed, Red Bull was immediately on the radio to the FIA after the incident. You might have thought it was to avoid a restart given the length of time it took to clear Stroll’s car and the fact there were only five laps remaining, but the team was actually putting Perez’s victory in jeopardy.

“Michael, I know you’re busy but we had zero warning of that failure on our metrics,” sporting director Jonathan Wheatley told Michael Masi. “Not a vibration, nothing. My point is, consider a red flag to allow everyone to change tyres.” 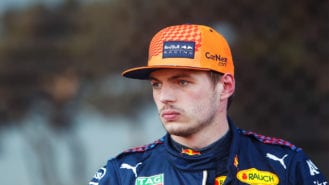 Has Formula 1 ever been better? Consider this: at the end of Q2 on a long, 100sec-plus Baku lap, just three-hundredths of a second covered the top five drivers, in…

Masi agreed, and the race was stopped with three laps remaining. And there would be a restart.

With the whole field on softs – fresh ones for Vettel who was now third on the grid alongside Gasly and behind Hamilton and Perez – a two-lap sprint race was to decide what the previous 49 laps had set up.

“We’ve got to remember this is a marathon, not a sprint,” Hamilton told his team before leaving the pit lane. “Got to be measured, how risky we go.”

George Russell crawled into the pits with a gearbox issue as the grid formed up but the lights came on regardless, and when they went out it was Hamilton who got the better getaway and had a clear lead into Turn One. Then it looked like his radio message came back to bite him as he locked up and sailed straight on into the run-off area.

“I hit some sort of switch that caused only the front brakes to work,” Hamilton explained afterwards. “There’s a button we have to help keep the front brakes up [to temperature] and, as Perez pulled over, I reacted and accidentally [turned] on the switch. It just locked up and I went straight on.” 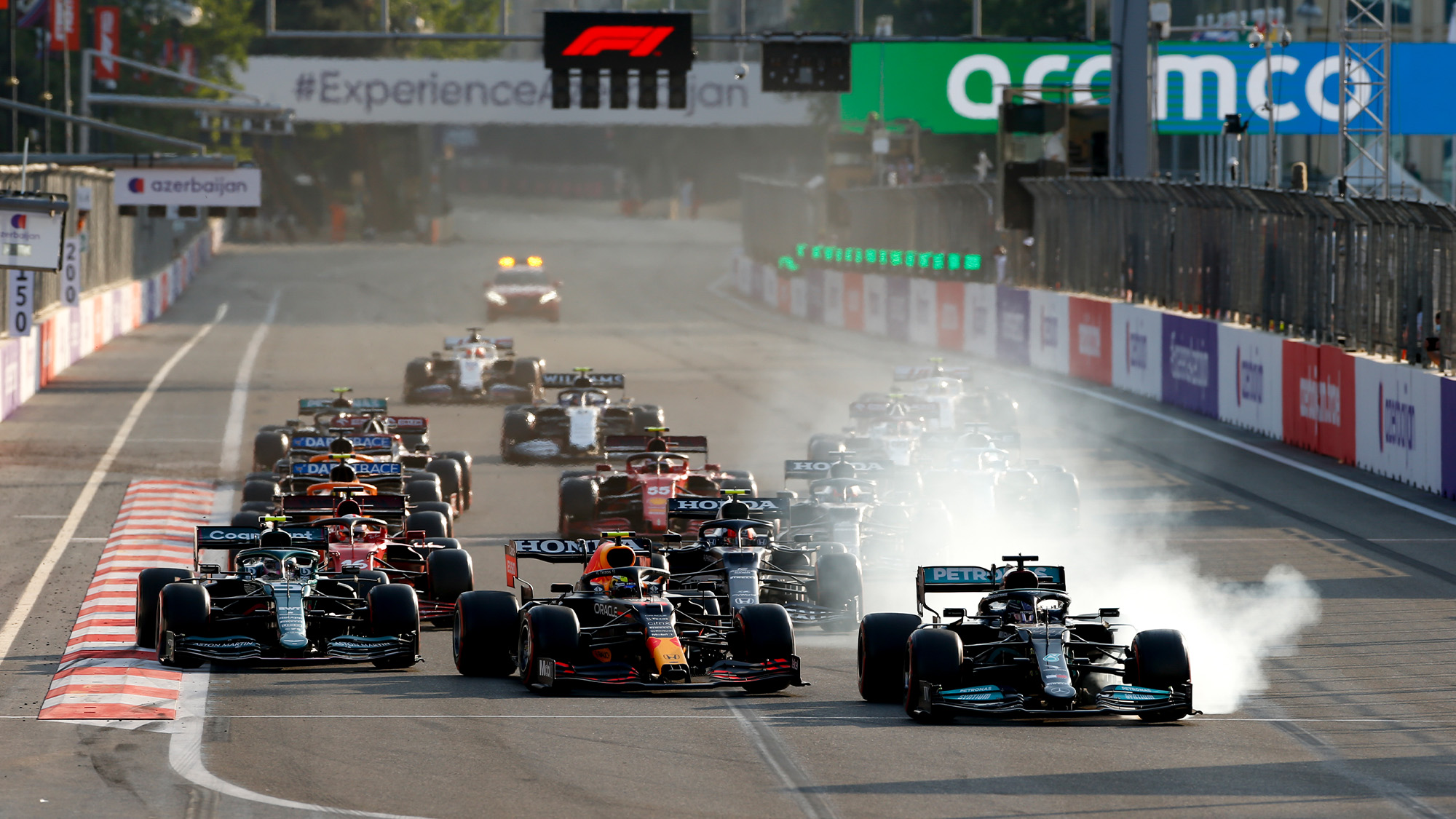 From there, Perez appeared untroubled for the two laps that remained, even if Vettel had fresh tyres behind him. And then he stopped his car shortly after crossing the finish line and it became clear that he too had nearly seen 25 points disappear.

“I am so, so happy for today,” Perez said. “The race, normally Baku is pretty crazy. First of all, I have to say I am very sorry for Max because he did a tremendous race and he really deserved the win. It would have been incredible to get that 1-2 for the team but at the end, it is a fantastic day for us.

“We were close to retiring the car but luckily we managed to finish the race. It was quite difficult all the way until the end.”

It transpired a hydraulics issue had been the cause for concern, but the stoppage was precautionary. It ensured Perez a first win in just his sixth race at Red Bull, and the man who replaced him at his former team scored a first Aston Martin podium in history. 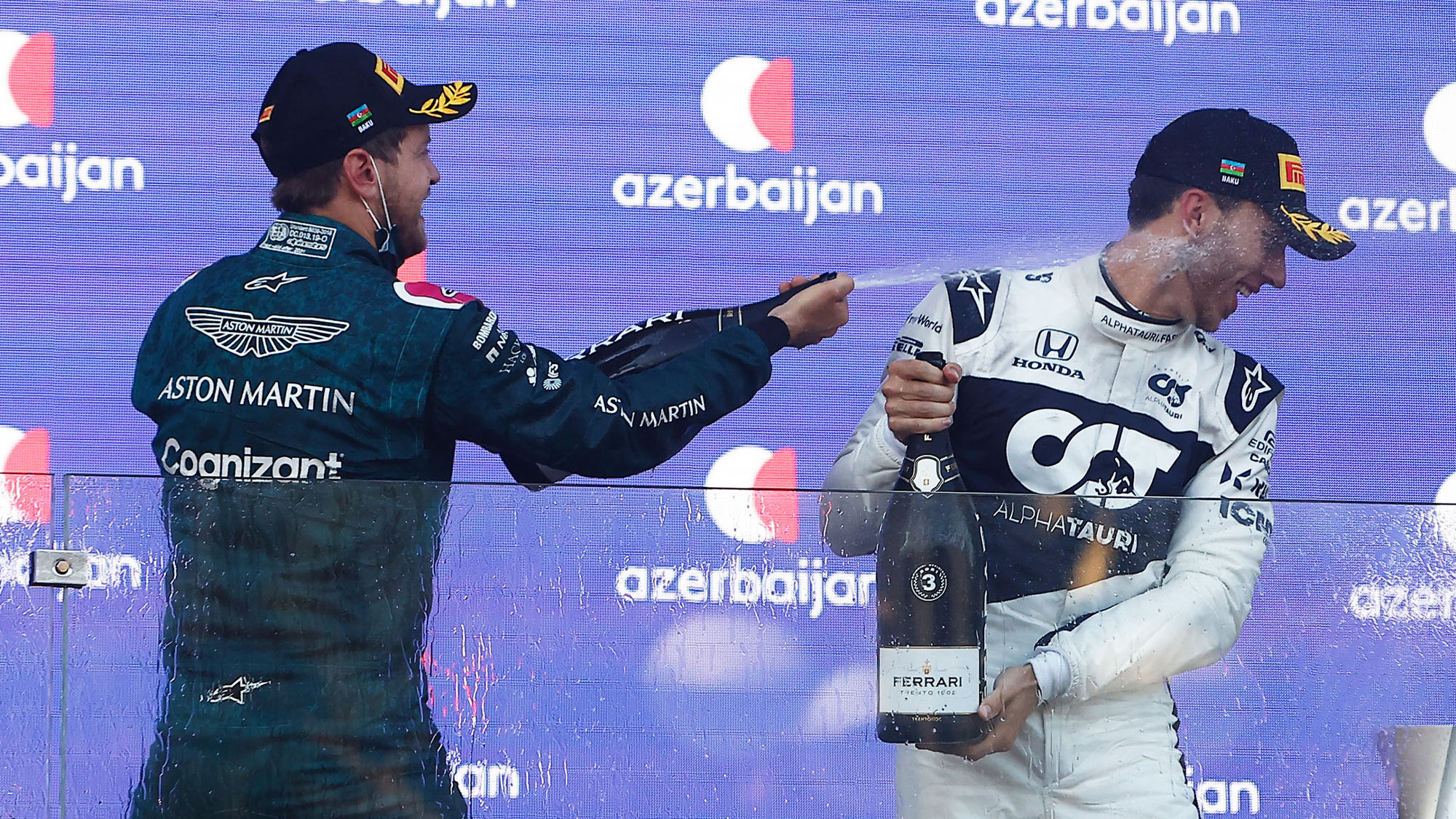 Unfamiliar faces on the podium

“It means a great deal, obviously,” Vettel said. “It was a tough start for us, but it was a great race, we had good pace and that was the key. I had a good start picked up positions straight away, looked after my tyres and as soon as everyone went into the pit I had really good pace to overcut, I think Yuki [Tsunoda], at least.

“And then the restart worked brilliantly for me, got another two positions there. Let’s be honest, we obviously had fresher tyres that helped with warming up and switch on, so a great day and I’m over the moon. 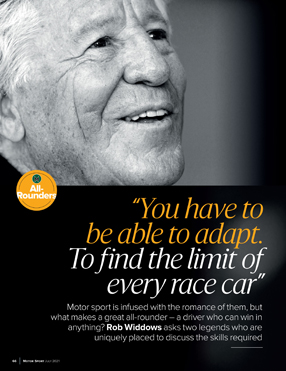 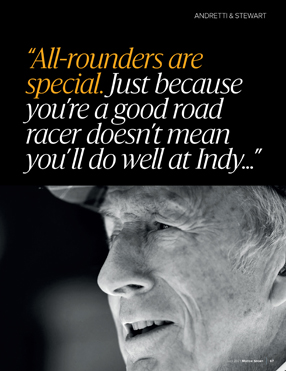 Andretti & Stewart: The talent that makes an all-round driving great

Back in what some like to call the ‘good old days’ racing drivers were freelancers, heroes for hire, hustling a grand prix car round Monte Carlo one weekend and taking…

“It’s a great podium and we didn’t expect that when we came here but even on Friday, even though we were nowhere, I was feeling quite relaxed. Yesterday we didn’t quite get it but today we did.”

The excitement didn’t end with the restart either, as Gasly’s power unit issue saw him struggle on the straights and Leclerc slipstreamed past before the finish of the penultimate lap, only for Gasly to tuck back into the tow and return the favour into Turn One.

“We had to get the elbows out!” Gasly said. “It was a very difficult race for me, from mid-race onwards, with an engine issue, so we were losing quite a lot of power down the straights. Seb managed to pass us in the middle of the race.

“In the last two laps I thought it was going to be very difficult with Charles behind us, but I tried and in every braking I wasn’t sure I was going to be able to stop the car but I had to go for it to get the podium and this feels incredible.” 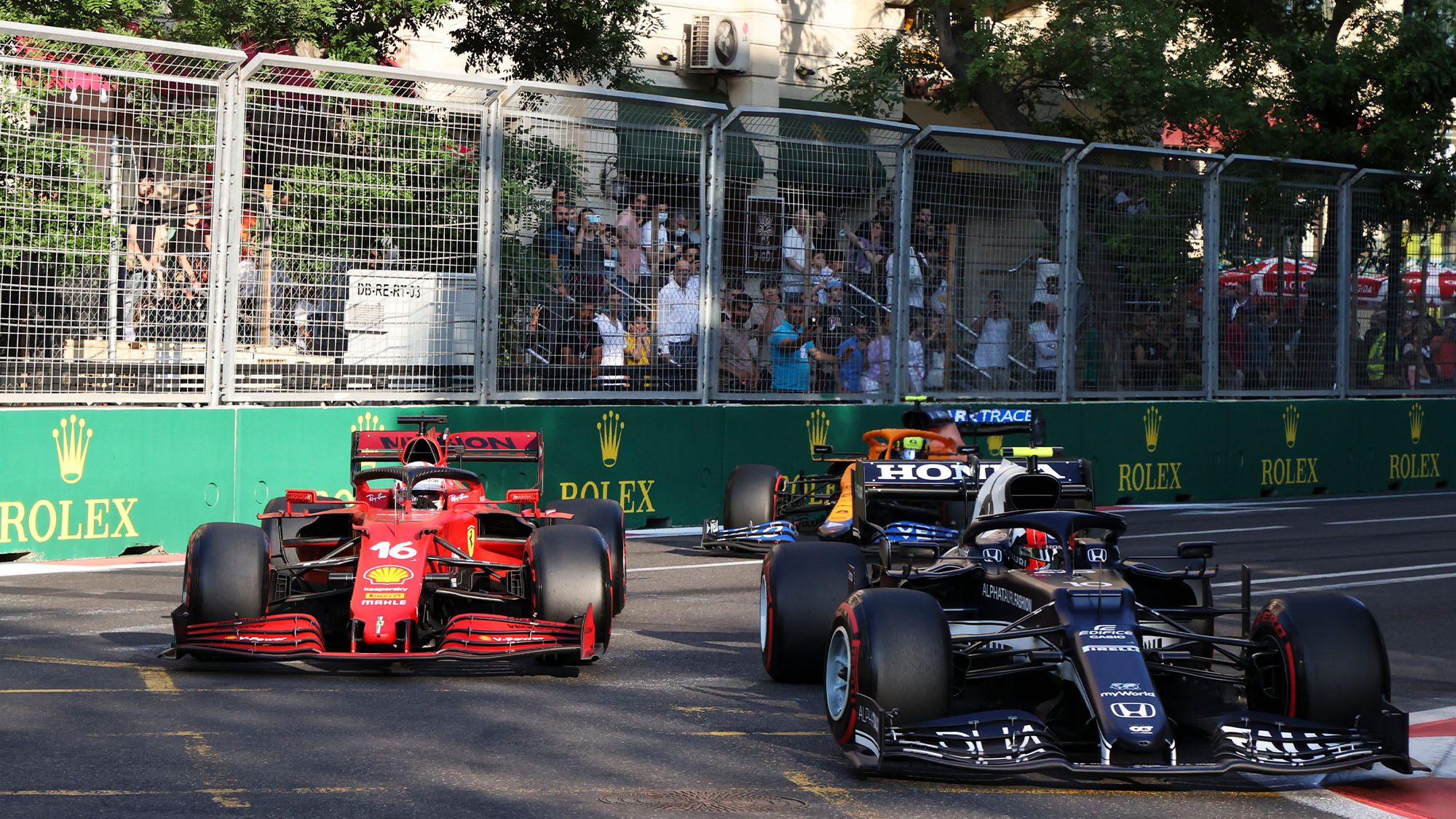 Gasly gets his elbows out in the final laps

It’s strange to say that fourth was still a solid result for Leclerc despite the chaos and his starting position, while Lando Norris rescued a fifth place by overtaking Tsunoda around the outside of Turn Two at the restart. Tsunoda had restarted in sixth after a very strong weekend but was boxed in for the final two laps and lost out to Fernando Alonso, but while that meant the best result for the veteran since his return to F1, seventh was still also Tsunoda’s highest finish in his rookie season.

Sainz, Daniel Ricciardo and Kimi Räikkönen rounded out the points, while the Haas drivers nearly came together on the run to the flag as Nikita Mazepin moved dangerously late in defence against Mick Schumacher, much to his team-mate’s anger.

That there were such strong emotions at the end for two drivers fighting over 13th summed up the whole day, as many will rue missed opportunities or celebrate stunning results. At different points it looked like being a monumental day in the championship battle one way or another, but eventually the two main title protagonists failed to score, and somehow it’s as you were.