Even before news of Mark Webber’s planned departure from Dietrich Mateschitz’s senior squad broke, the current internecine battle at Scuderia Toro Rosso possessed an edge its predecessor never did. @AussieGrit had his feet firmly under Red Bull’s table when Sébastien Buemi and Jaime Alguersuari were parading their wares and so there was never any suggestion that they would be promoted – or any sense that they deserved to be. 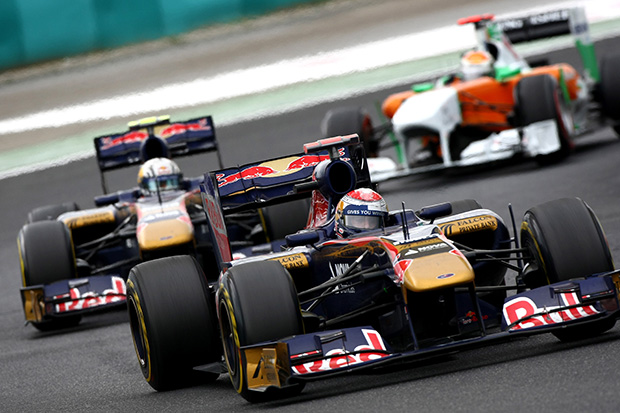 Buemi (24) and Alguersuari (23) are the same ages as their replacements, Daniel Ricciardo and Jean-Eric Vergne, and yet both will be lucky to be awarded another Formula 1 opportunity. That’s despite Alguersuari’s scoring 26 points, courtesy of seven top 10s, in 2011, a total that Vergne (16 points) and Ricciardo (10) had to combine to match last season.

Timing is vital – and so it’s the latter pair who now have 10 Grands Prix to convince their employers that they could do at least as good a job in a (probably) winning car in 2014 as, say, an out-of-contract Kimi Räikkönen.

The younger Vergne has been shadowing Ricciardo throughout his single-seater career. Both finished second in a Formula Renault 2.0 Eurocup before graduating to Formula 3 and winning the British title with Carlin Motorsport – as had Alguersuari (in 2008) – and then finishing runner-up in Formula Renault 3.5. For a few races in 2010 they were team-mates at Tech 1 Racing, and in 2011 they shared the Friday Practice Driver role at Toro Rosso. For much of the time, therefore, they have been lobbing shells over the horizon. Now, as the crux of their careers approaches, it’s strictly hand-to-hand combat.

So which holds the upper?

Over a single lap it is, without question, Ricciardo. The Australian aced his French team-mate 16:4 in qualifying during 2012, and to date this season his advantage is 6:3. On average, he tends to start a row ahead. 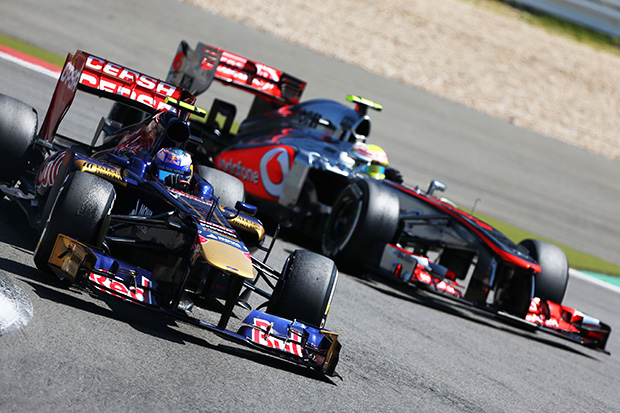 In 2012, Ricciardo gained 49 places above and beyond his grid positions; Vergne gained 72 despite suffering three more retirements. So far this season, Vergne has retired four times and yet gained another 16 places, whereas Ricciardo has retired twice and lost 21.

Like most damned statistics these can be explained in more than one way: either Ricciardo is pushing a car faster than it wants to go and suffers for it as the levels average out over a race distance, or Vergne is underperforming in qualifying and looking better because of it, picking off people he should have started ahead of in the first place.

There is another intriguing pattern. You could barely squeeze a credit card between them in races in 2012: they finished one place apart in China, Bahrain, Spain, Canada, Britain, Germany, Hungary, Belgium and Korea – Vergne finishing 5:4 ahead on this score – and ended up a place apart in the overall standings. This season, stakes raised, steady consistency is not what necessarily catches the eye. Pushing harder and perhaps taking more risks has seen them diverge within the running orders, each scoring their best grid positions and results to date in the process, Vergne’s sixth-place finish in Canada pipping Ricciardo’s seventh in China. 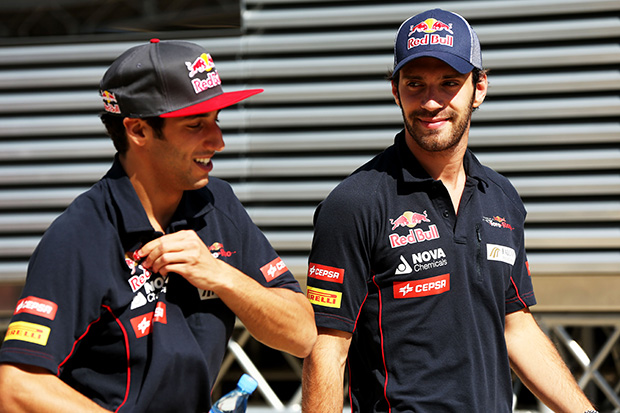 In conclusion, though there’s little between them as packages, its Ricciardo’s outright speed – qualifying, though not as pure a test as it once was, is still most pundits’ barometer of potential – puts him at the front of this micro-queue. Unfortunately for him, he suffers, as does Vergne, in comparison with Vettel’s performances at Toro Rosso, the German’s historic win (in a Newey design admittedly) in the wet at Monza in 2008 marking him out as obviously special.

The chances of Red Bull’s Formula 1 academy ‘spotting’ another golden bull’s eye were always distinctly marginal. Sifting talent is what junior formulae are for. Or used to be. F1 teams today possess sufficient complexity, budget, paranoia and control-freakery to warrant continuing the process under their own auspices.

However, this process began, albeit under different circumstances, with Auto Union and Mercedes-Benz as long ago as the 1930s. The former was desperate to find a capable team-mate for Hans Stuck for the 1935 season. It signed at great expense the established Achille Varzi, but stumbled across Bernd Rosemeyer, a confident, talented chancer with no car racing experience – a bonus as it turned out – who mithered incessantly until he was given an evaluation test at the Nürburgring in November 1934. 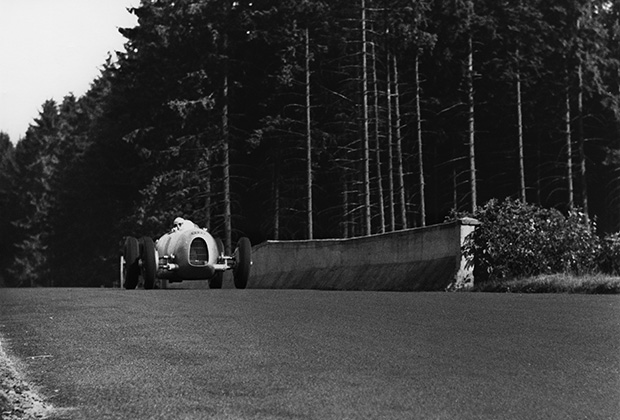 Rosemeyer’s subsequent outstanding success, plus the lack of a junior formula capable of preparing a driver for a quirky 450bhp car on skinny tyres, made AU realise that new talent had to be sought from all areas, some more unusual than others, drawn together and thrown in the deepest of ends. In this way future GP winners Rudolf Hasse and Hermann Paul Müller were discovered – and inexperienced Rudolf Heydel, chosen from the many as ‘the next Rosemeyer’ at the end of 1935, met a sudden and violent end on his first day of official testing at Monza in the February of the following year.

Mercedes-Benz, more grandiose than its necessarily resourceful rival, held a ‘Driver School’ at the ’Ring in October 1936. Almost 30 hopefuls were invited, a dozen or so got their chance behind the wheel of the GP car; Britain’s Dick Seaman and Swiss Christian Kautz, blessed with more experience than their rivals, were selected as the official juniors and inexperienced Hermann Schmitz met his end (in a 500K road car that provided the candidates’ first hurdle).

In the 1960s, Scuderia Ferrari was persuaded by a federation of smaller teams to boost the search for a replacement for deceased Italian champions Alberto Ascari, Eugenio Castellotti and Luigi Musso. The Federazione Italiana Scuderie Mobilistiche (FISA) was thus loaned a 156 ‘Sharknose’, to be driven by Giancarlo Baghetti, winner of the 10-lap Coppa FISA Formula Junior selection race at Monza in December 1960. The Milanese used the car to win his first three F1 races, including the French GP on his World Championship debut. He also set the fastest lap in that season’s Italian GP but ultimately would be found lacking at the highest level. Enzo soon lost interest, and Eugenio Dragoni, the fed’s pushiest, biggest wheel as team manager of ambitious Scuderia Sant Ambroeus, got what he really wanted: a job at Ferrari. 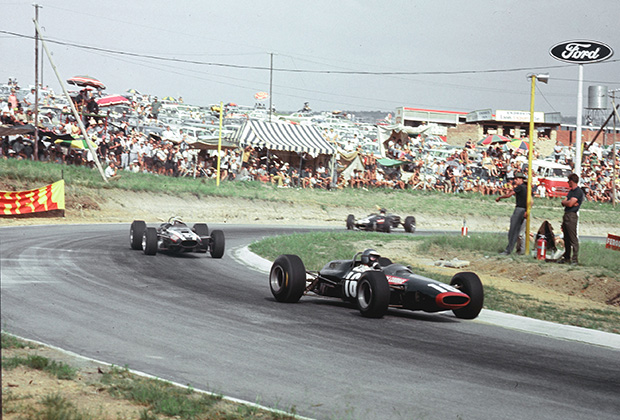 BRM also sought the next F1 generation in the 1960s. It thought enough of Jack Lewis’s talents – and father’s funds – to supply his Ecurie Galloise with a car for 1962 but had insufficient infrastructure and/or will to ensure its speed, preparedness and reliability. The talented Lewis called a halt to the project after just three races and retired for good at the end of the season. And in 1967, Reg Parnell Racing ran a semi-works BRM shared by Piers Courage and Chris Irwin. The former got first dibs, floundered, tried too hard, earned himself a dubious reputation and was snubbed publicly at his home GP, while the latter, more focused, intense and deemed the best of the British young guns, burnished his reputation, particularly at the wheel of the unloved H16. Courage would win over his critics before an untimely death at Zandvoort in 1970, while a thunderous accident in a sports car at the Nürburgring in 1968 would prevent Irwin, gravely injured, from proving the pundits right or wrong.

The carefully nurtured Vettel and Lewis Hamilton apart, finding the next big thing has proved an inexact science. The remaining episodes of Ricciardo versus Vergne will be fascinating, but my guess is that they will neither provide a conclusive answer nor the man most likely. Given the myriad changes pending for 2014, speed with experience will be key. Cue Kimi for his first bit of F1 ‘bull’ since leaving Sauber 12 years ago.