The Brazilian Grand Prix usually throws up something bizarre. But none have come close to the dramatic 2003 race — and its aftermath 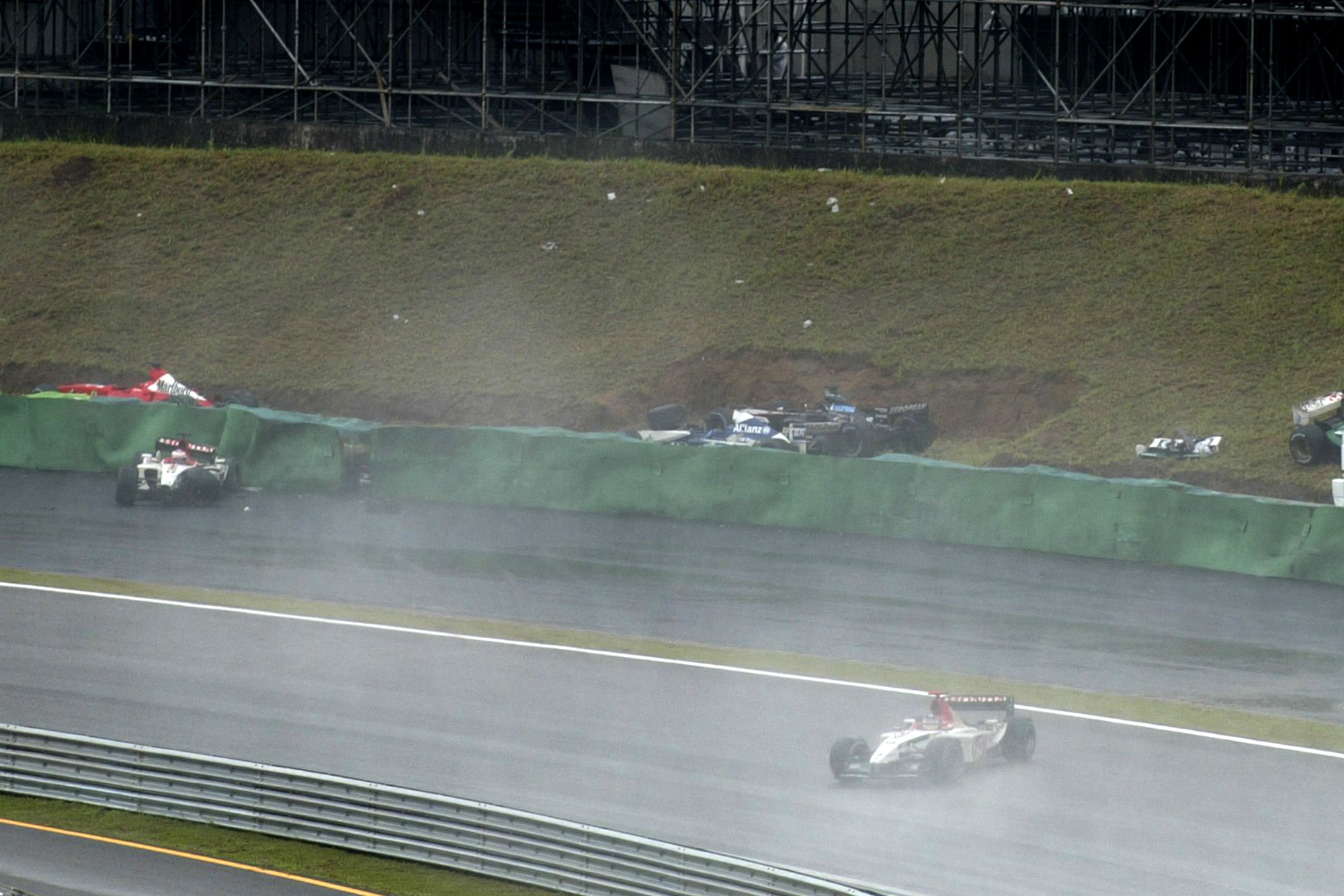 Brazilian Grand Prix host Interlagos has good claim to be modern Formula 1’s Bermuda Triangle. Anything can happen here. Take, for example, the famous sublime-to-the-ridiculous title conclusions there in 2007, ’08 and ’12. Take, further, that qualifying in 2000 was halted repeatedly because advertising hoardings were falling onto the track.

But even those were nothing on the 2003 race, which squeezed a seemingly never-ending supply of Bermuda Triangle goings-on into a single race. Then into the days after.

It was round three that year, and F1 was experiencing an incongruous renaissance. It had just endured a soporific 2002 season of crushing Ferrari and Michael Schumacher domination. FIA president Max Mosley, in response, forced through various new rules on the 2003 season’s eve.

And one way or another he got his desired outcome. “Whether because of Mosley’s new rules, or despite them, this seems to be turning into a vintage season”, Simon Taylor noted for Motor Sport.

“The first three grands prix of 2003 have been dramatic, exciting, unpredictable, and chock-full of good old-fashioned motor racing.”

None were won by Ferrari either. And of those three races, Interlagos’s topped the lot. 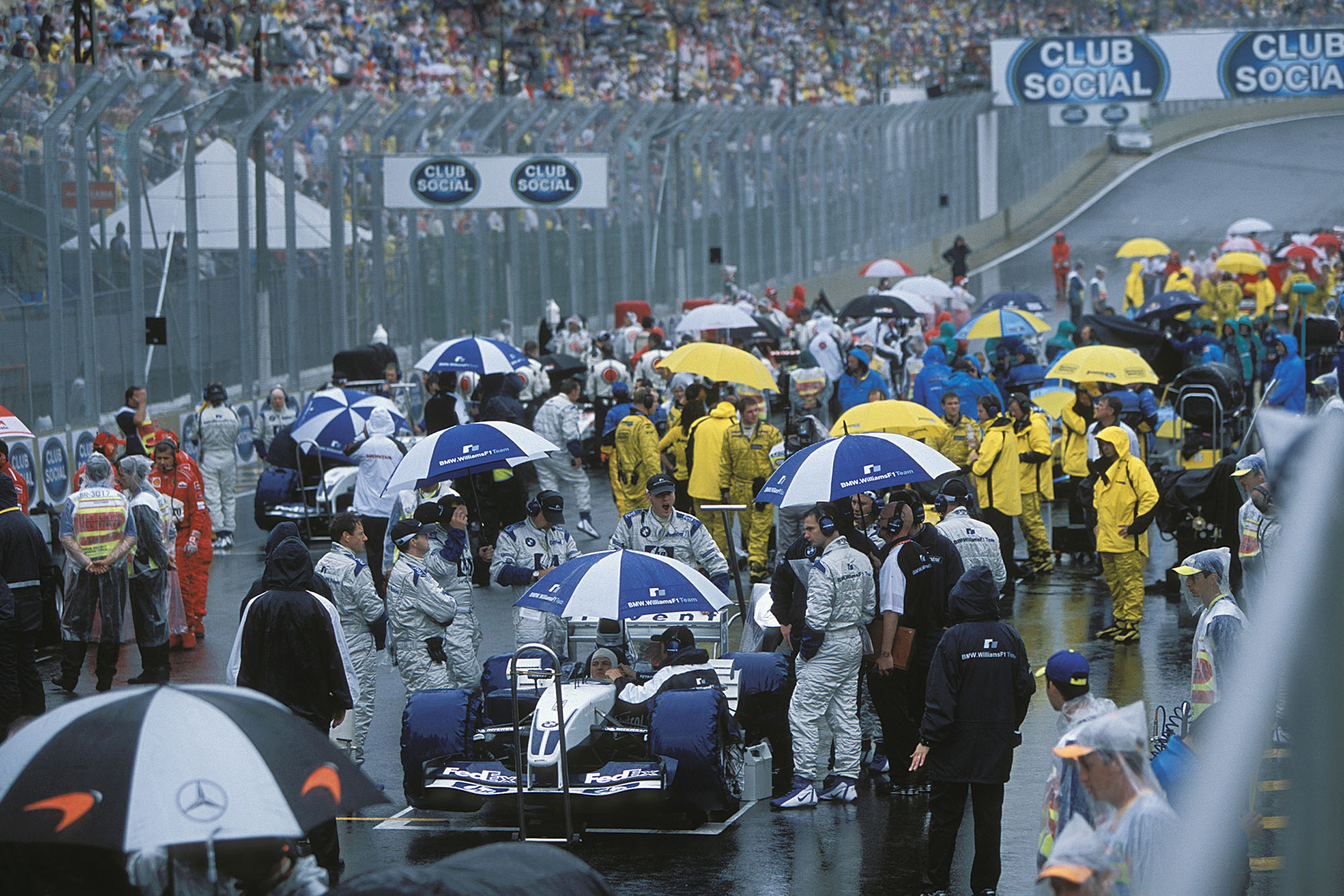 It started on a soaking track – not unusual at Interlagos – and several initial laps behind the safety car. Once all were released we got swift indication of one star of that day, as a rapid young Kimi Räikkönen scampered quickly from fourth place to first and cleared off.

Soon he was followed by McLaren team-mate David Coulthard, and Coulthard acquired the lead after Räikkönen, for some reason, wasn’t pitted with virtually everyone else under a safety car, so fell back to ninth after pitting later. Then he started scampering forward all over again.

Yet by then this race’s main plot point, outstripping even all the others, had been established. The track was now conspicuously drying – apart from at the long Curva do Sol. Somehow rainwater was being funnelled there which created a treacherous and persistent river across the track.

The resultant aquaplaning accounted eventually for six cars, without any respect given to the reputation of their drivers: one of them even was Schumacher, resulting in his first non-finish for nearly two years. 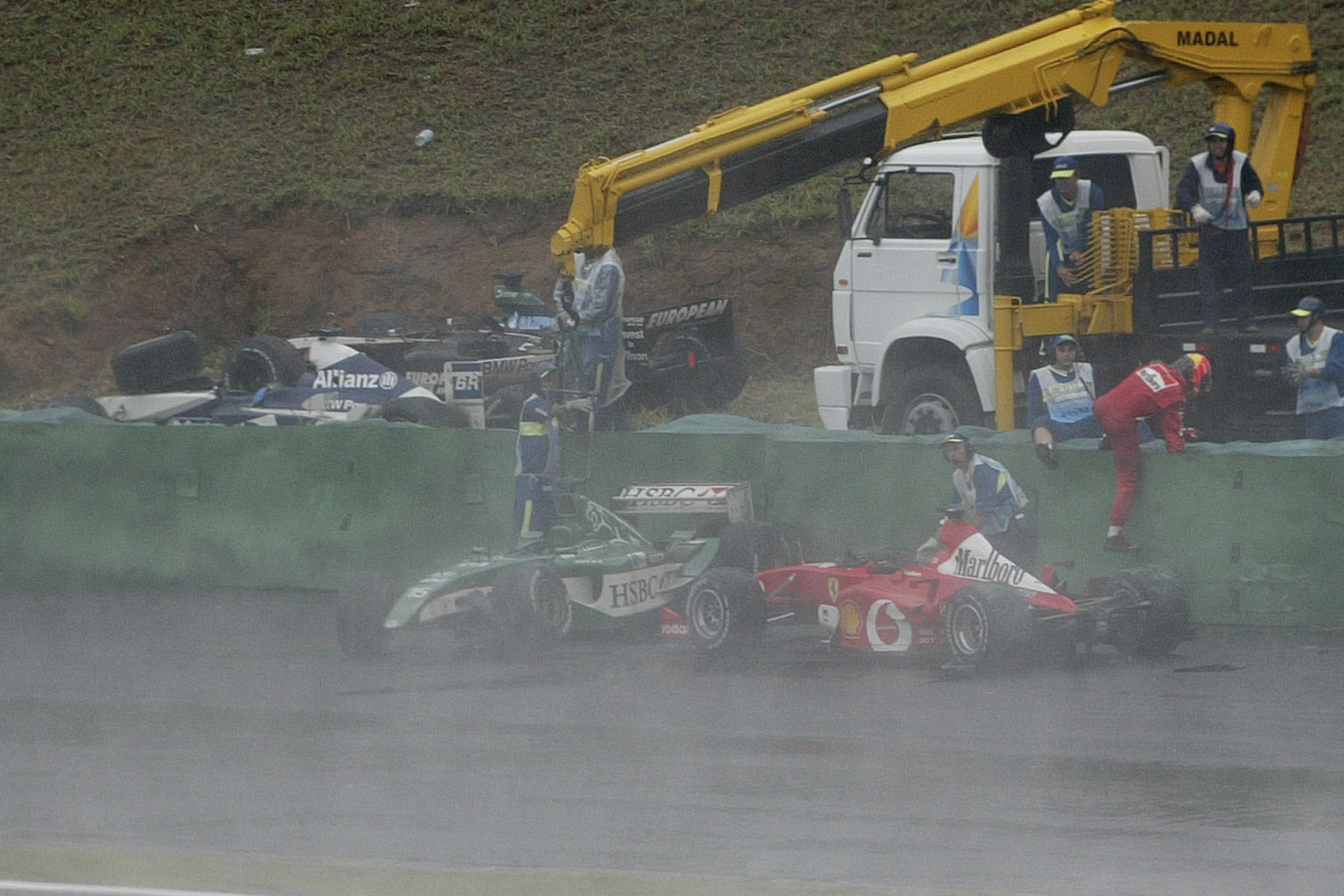 Schumacher was one of the Curva do Sol victims Photo: Motorsport Images

The drying track suited the Bridgestone tyre more than the Michelin, and the Japanese-shod home-favourite Rubens Barrichello shadowed French-shod leader Coulthard, then passed when he ran wide and streaked clear. His legendary foul luck in this race was surely at last to end?

No. Before we knew it his Ferrari rolled to a halt on track. Incredibly, it was out of fuel. And it was his ninth consecutive retirement at his home round.

“He drove a highly-intelligent, controlled race, paced himself perfectly, and stayed calmly on the track when his team leader fell off,” Taylor observed. “This time he’d really got this race won. He wanted it so badly, and just about everyone else wanted it for him too. When did a Ferrari last suffer a fuel system failure, for heaven’s sake?”

Underlining also that early 2003 was a departure from what we’d grown used to, this also was Ferrari’s first no score since the European Grand Prix of late 1999.

Coulthard, therefore, looked set fair. He made his final stop and dropped to fourth, but no worry as those ahead still had to make their final halts.

Yet we never got that far; Coulthard became another of this race’s might-have-beens. Mark Webber in his Jaguar had a spectacular smash in the hemmed-in curving start-finish section, scattering the road with debris. 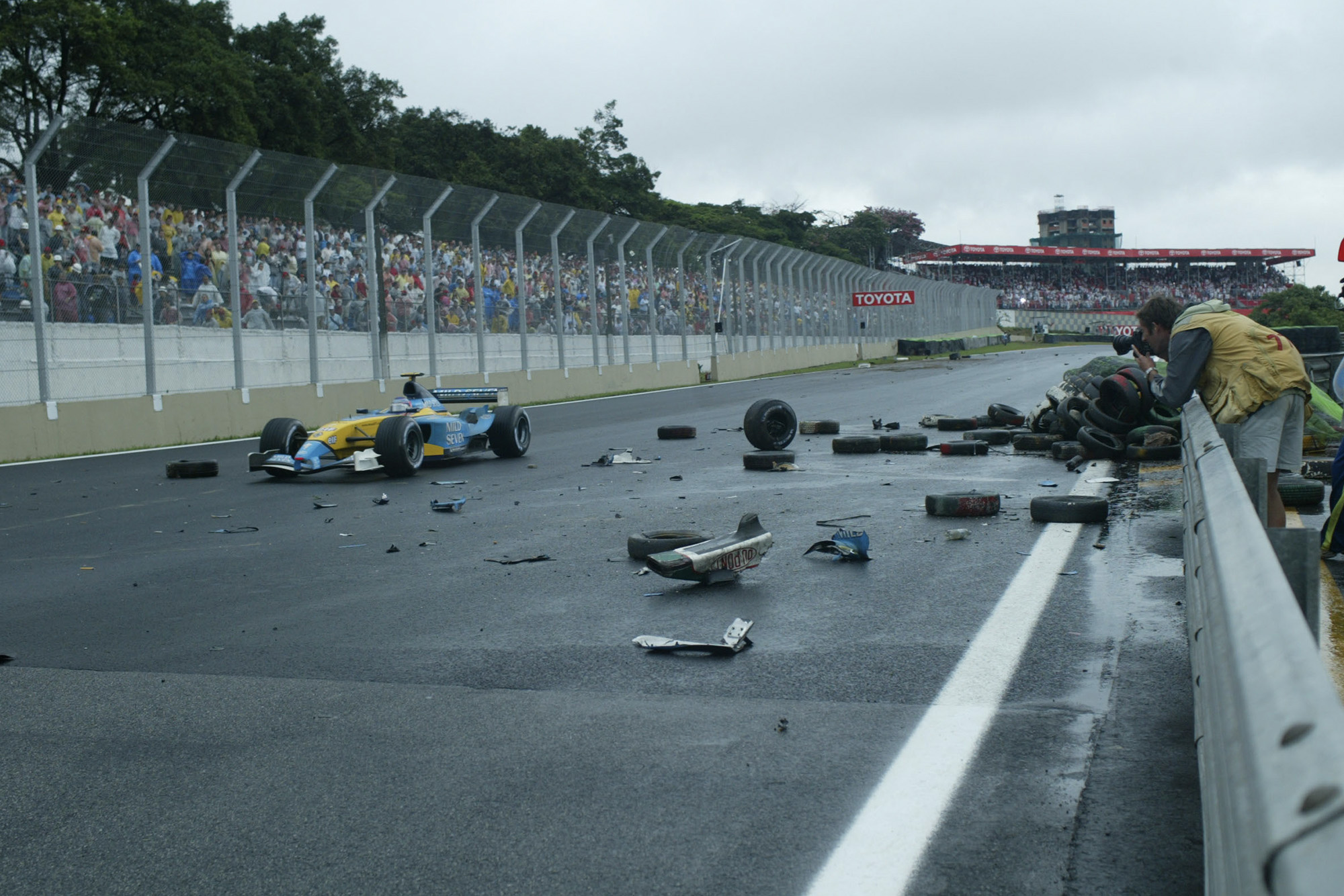 Jarno Trulli driving through the debris of Webber and Alonso Photo: Motorsport Images

Then a young Fernando Alonso, running third, slammed into the debris then into the barriers at both sides of the track. It meant he left the circuit on a stretcher. It ended a fine drive, after a penalty for passing under yellow and pitting twice in two laps when Renault put the wrong tyres on.

He and Räikkönen were another way that 2003 was different. For years we’d asked who’d lead the post-Schumacher generation. Now we knew.

The red flag was brought out and, with more than three-quarters of the race done, that meant a result was declared. But even that was far from straightforward.

Giancarlo Fisichella, driving for the now very cash-strapped Jordan, was another to benefit from his Bridgestones, as well as from typical Jordan smart strategy as he’d pitted under the initial safety car to fill to the brim with fuel. And running ever faster and non-stop since had just got past Räikkönen for first. 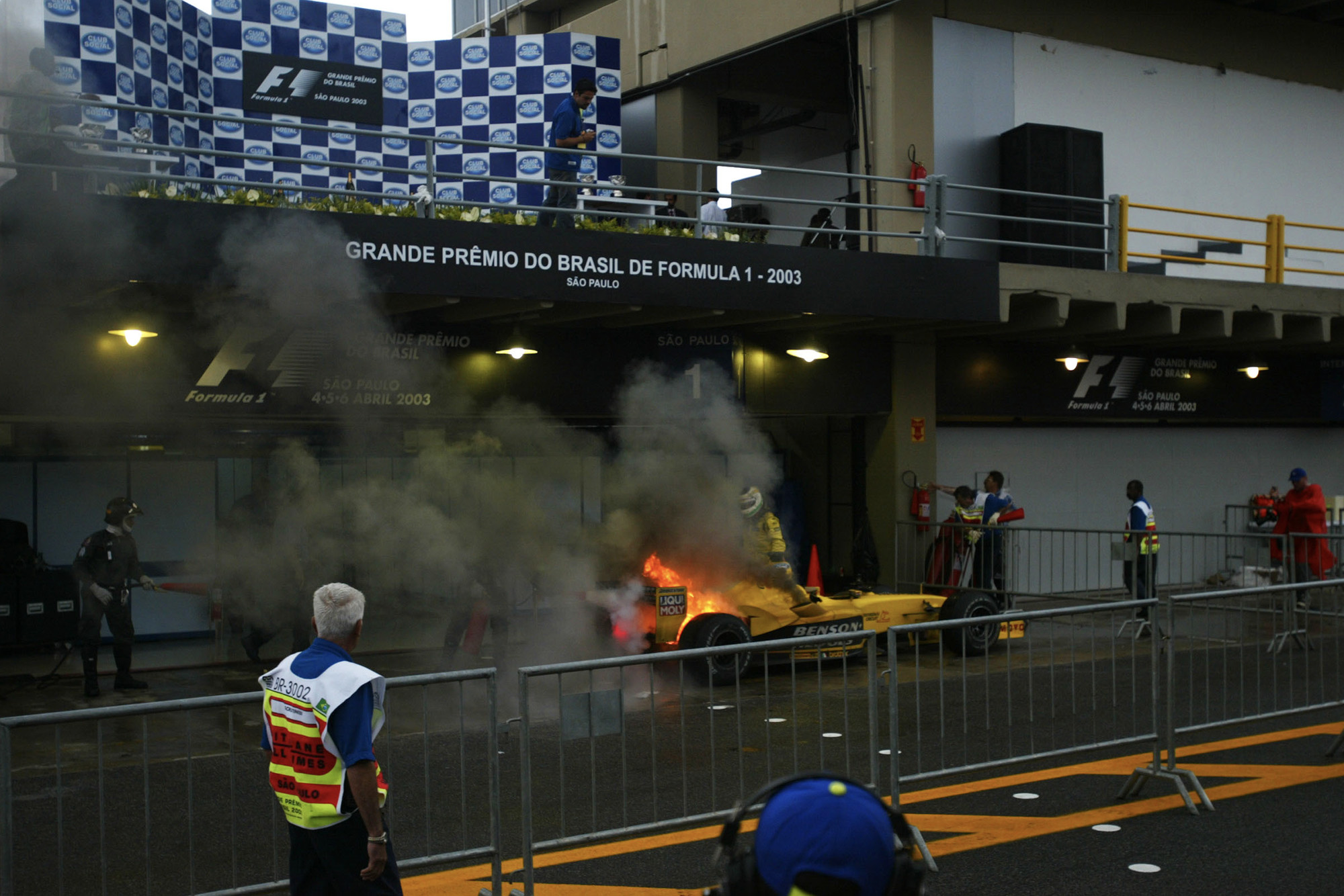 It looked Fisichella would be declared victor, and he celebrated wildly with his team in parc fermé while – keeping with the day’s surrealism – his Jordan caught fire behind him.

No. There was a countback of two laps get the final result, which was taken from lap 53 when Räikkönen was ahead. He therefore stood on the podium’s top step with a glum Fisichella runner-up.

Surely now the end of matters, as all packed up and left?

No. Jordan had evidence that Fisichella had in fact started lap 56 when the race was stopped, meaning the result should be taken from the start of lap 54 when Fisichella led. Some indeed spotted at the time that the timing had clicked to 55 laps completed then, for reasons unknown, back to 54. 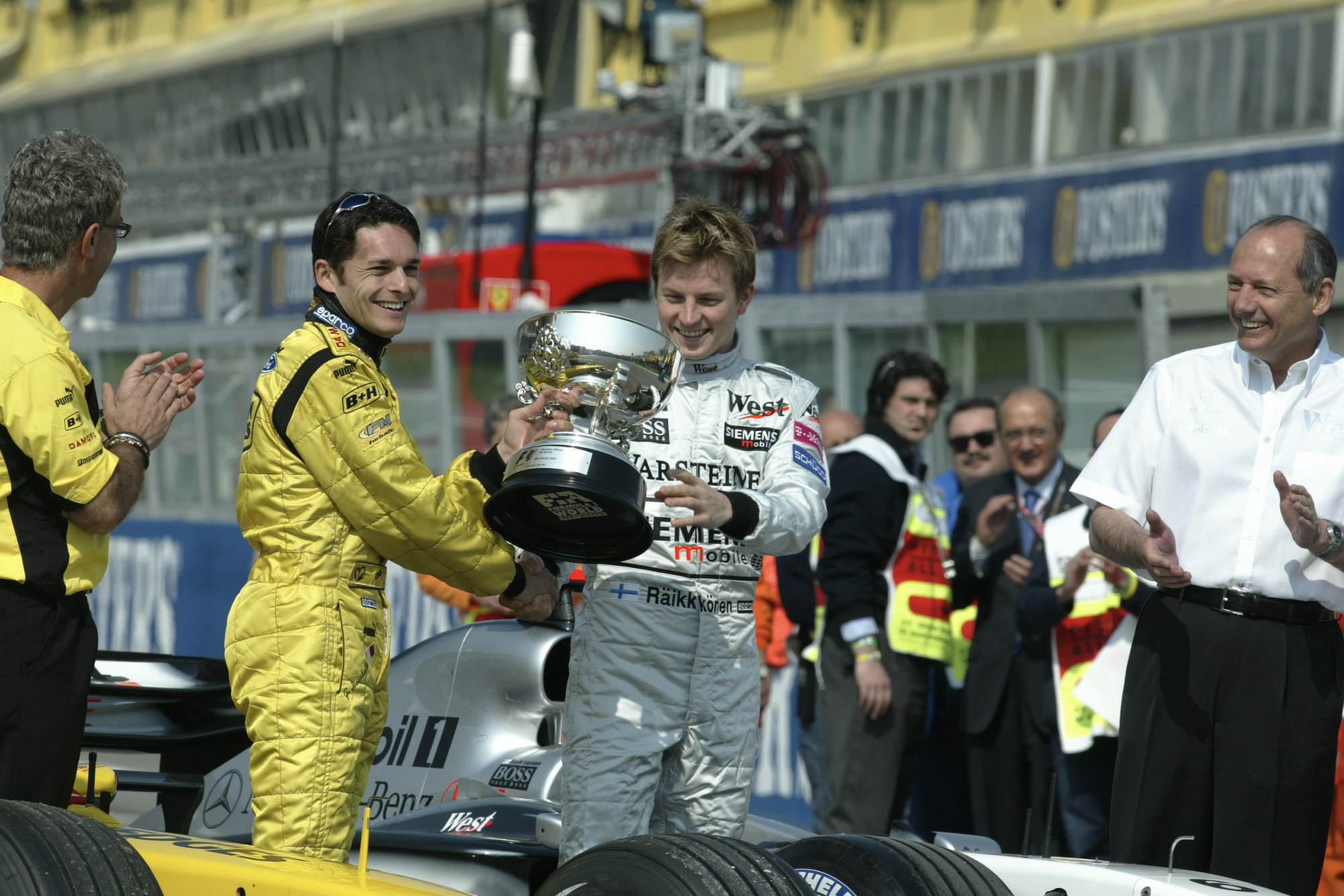 The stewards, after reconvening in Paris, agreed and Fisichella was declared fairy-tale victor after all on the Friday after the race. It was his long-overdue first win, but also Jordan’s last.

And in a sense the 2003 Brazilian Grand Prix ended almost two weeks after it had started, as the victory trophy was passed from Räikkönen to Fisichella in a start-finish line ceremony before practice for the following round at Imola. It’s hard to think there’s ever been an F1 race as bizarre.