A retired Grand Prix driver told me recently that he was struggling to retain much interest in the 2015 season. For one thing, he said, the endless paddock dissension had begun long ago to get on his nerves; for another, he much disliked the penalties imposed for exceeding ‘power unit’ quotas, so that qualifying times and grid order were increasingly at variance; for a third, the Mercedes domination – while unquestionably deserved – was going on a bit. 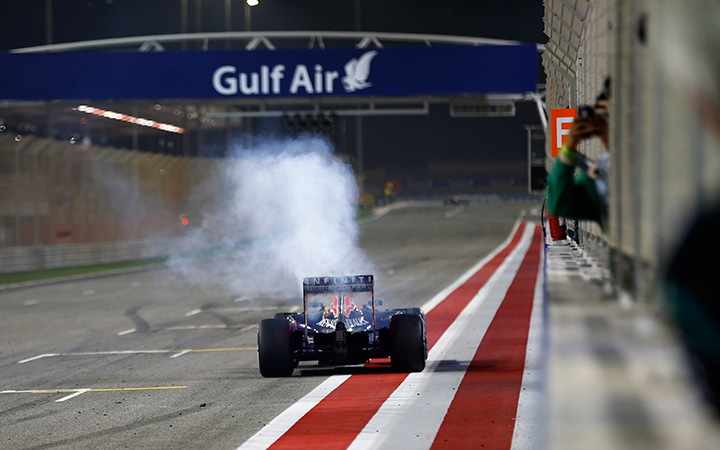 “And if all that weren’t enough,” he said, “you’ve got the best driver playing no part in the races. If Alonso was in this year’s Ferrari, he’d be frightening Hamilton and Rosberg…”

A not uncommon view. After a lacklustre season in 2014, Sebastian Vettel has been rejuvenated by his move to Ferrari, put aside his distaste for ‘hybrid’ Formula 1, and most of the time has driven superbly. To no-one’s great surprise, he has had distinctly the better of Kimi Räikkönen, but he has not annihilated him as Alonso did, and when one remembers some of Fernando’s performances – with a truly awful car – last season, one can only lament that he is not benefiting from Ferrari’s turnaround in 2015. Take a bow, Marco Mattiacci, wherever you are.

As it is, Alonso – grid penalties and all – is languishing towards the back, in company with McLaren-Honda team-mate Jenson Button. Certainly the wretched ‘token’ system is doing Honda no favours in its efforts to develop the engine, to get on terms with Renault, let alone Mercedes and Ferrari, and it doesn’t help, either, that the Japanese company is working with – and learning from – only one team.

All that said, though, it is inescapably the case that Honda is falling way short of expectations. Eight races into the season Button has four World Championship points, Alonso – like the Manor Marussia drivers – not a one.

Fernando may be prodigiously paid by McLaren and Honda, but long ago he reached a point where, as Alain Prost put it, “Your retainer doesn’t mean much any more in terms of money – but it’s still important as an indication of worth…” Alonso need have no worries on that score, but Jacques Villeneuve nailed it when he described Fernando as ‘a racing animal – without competition he would be lost…’

Emphatically he has been without it thus far in 2015, but only once has he allowed his frustration to break surface. In Montréal, running around 13th and struggling to stay with such as Marcus Ericsson, he was asked by the team to save fuel to ‘avoid problems later in the race’, and that was an indignity too far. Already he had ‘big problems’, he animatedly told his race engineer, and didn’t enjoy ‘looking like an amateur’.

That moment apart, Alonso has remained the soul of patience this year, to a degree that has surprised many, myself included. He and Button – together with Eric Boullier – continue to stress their faith in Honda’s ability to come right in the end, and for that the Japanese engineers should be suitably grateful. At Renault they dream of such support.

From the archive: Renault Sport lynchpins talk through the V8 era (2014)

Am I alone, I wonder, in being heartily sick of Dietrich Mateschitz and most of his works? You remember Mateschitz – he’s the guy who in 1984 approached Austrian rookie Gerhard Berger with a view to backing his F1 debut with ATS at the Österreichring. “He said, ‘I want to sponsor you – but I don’t have any money!’” Gerhard laughingly relates. “In the end we did a small deal for something on my helmet…”

In the years since, Mateschitz has solved the money problem, making a fortune from a soft drink many apparently find to their taste, and he has spent part of it on a marketing campaign aimed at ensuring that in no crevice of the world are the words ‘Red Bull’ unknown. When it came to F1, he acquired the Jaguar team, and employed Christian Horner to manage it (alongside his man Helmut Marko).

As well as that, Mateschitz also bought the Minardi team, renaming it Toro Rosso, which has since served as a junior team to Red Bull Racing, fostering the talents of such as Vettel and Daniel Ricciardo. Owning and entering four cars – one fifth of the grid – in each race has done no harm at all to his powerbase in F1. Assuredly he has the ear of Bernie Ecclestone to a greater degree than all save Ferrari.

What’s more, you’d have to say that it all worked out rather well. After beginning quietly in 2005, Red Bull announced the signing of Adrian Newey, whose first car appeared in ’07, also the first year of the team’s association with Renault. At the same time Mark Webber was hired as David Coulthard’s team-mate, and two years later – after winning at Monza – Vettel was promoted from Toro Rosso to replace DC. Early in 2009, at Shanghai, Sebastian scored Red Bull’s first Grand Prix victory.

He was always – very much – the team’s golden boy, particularly in the eyes of Marko, and this led to a frosty relationship with Webber, which was not always easy to manage.

From the archive: Mark Webber sits down for a long chat with Nigel (2014)

For all that, though, the inventive genius of Newey ensured that for several years a Red Bull was the car to have: before he quit F1 at the end of 2013 Mark had won nine Grands Prix – and before he left for Ferrari a year later Sebastian had put an astonishing 38 on the board, to say nothing of four consecutive World Championships. The Red Bull tally currently stands at 50.

Every one of these was achieved with a Renault engine, and you might reasonably have expected that from the long relationship an ethos of ‘win together, lose together’ would have evolved.

Not a bit of it. In the hybrid power unit era Renault have undeniably struggled: such was the inherent ability of Newey’s RB10 in 2014 that, despite a shortage of power, Ricciardo was still able to win three races, but this year the team has gone into free fall, Renault short on power, reliability and driveability, and – with Adrian still involved, but a step removed – Red Bull quite often humbled by its poor relation, Toro Rosso, the only other team to use Renault power units…

It must be said that, as it goes through its time of strife, Red Bull Racing is not the recipient of much sympathy from outside. For one thing, it has never been within the paddock the most popular of outfits, having gained a reputation for arrogance through its glory years; for another, in the eyes of enthusiasts, it has always been regarded very much as a – forgive me – ‘marketing-led’ operation rather than a purist racing team in the manner of Williams or McLaren.

All of this, though, has been compounded – to some degree in 2014, much more so this year – by its extraordinary public vilification of its engine partner. Messrs Horner and Marko have gone on at length about the shortcomings of Renault, and clearly this is the company’s official policy, for periodically Mateschitz himself weighs in, most recently before the Austrian Grand Prix at… the Red Bull Ring.

A few of his choice observations about Renault: “Besides taking our time and money they have destroyed our enjoyment and motivation, because no driver and chassis in this world can compensate for this horsepower deficit.

“In addition, our chances were scuppered by aerodynamic regulations which meant that Adrian Newey could not weave his magic on the front wings.

“Now we have used our fourth engine, which means we are penalised on the grid. How many more things have to happen before we lose all enjoyment?”

Well, boo bloody hoo. There wasn’t much enjoyment for everyone else when Mateschitz’s team won nine on the trot in the second half of 2013.

Red Bull is among the teams in the ill-named F1 Strategy Group, all of whom are there by virtue of having committed to F1 until 2020, but it is a characteristic of the ultra-rich that they believe the rules by which most of us have to live do not apply to them, and in threatening to quit the sport Mateschitz brushed that aside. “Sure, there are contracts for Formula 1 participation – but how many teams have dropped out of F1, despite the contracts? You cannot hold someone if he wants to get out.”

Perhaps it will happen, who knows – and then what next for Red Bull? Test cricket perhaps? A somewhat remote contingency, I accept, but just in case perhaps someone at Lords should be tipped the wink that if something horrid keeps his team from winning, Mateschitz will take his bat and ball home.

In F1, meantime, Honda will rejoice that some teams put a higher value on dignity than others.