Johnny Herbert has called for an in-depth review into how grands prix are run, following the contentious end to this year’s F1 championship and a series of inconsistent stewarding decisions.

The former F1 race winner and TV pundit writes: “This should never have happened and it should never again,” after an unconventional, speeded-up safety car procedure at the end of the Abu Dhabi Grand Prix enabled Max Verstappen to pass Lewis Hamilton on the final lap, even though the Mercedes driver had dominated the rest of the race.

Verstappen had the chance to pit for fresh tyres under the safety car with little risk of losing position — an option not open to Hamilton. The backmarkers between him and Hamilton were then cleared — but not those further back. Rather than circulating for one more lap as usual, the safety car then returned immediately to the pits, giving the Dutchman one lap to win the title.

There were further questions over the stewards’ decisions too after Hamilton escaped a penalty when he ran off track while defending against Verstappen — as the Dutchman did in Brazil — while Verstappen was penalised for overtaking off the circuit at the previous race in Saudi Arabia. 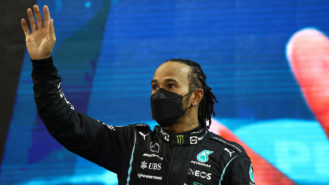 'It's too soon for Lewis Hamilton to quit F1: he deserves an eighth title'

Writing in the February 2022 issue of Motor Sport, available later this month, Herbert says that “every aspect” of how grands prix are operated should be reviewed by the sport’s governing body, the FIA

“This one leaves a bitter taste,” he writes. “Lewis had done absolutely nothing wrong, Red Bull had made the right calls on the strategy. Then it just seemed unfair that Lewis lost it when he had no chance of a fight.

“So what should have happened? The track was clear, but there wasn’t time to let the unlapped cars past. They should have been released to race with the five unlapped cars remaining in between Hamilton and Verstappen. That way it could have been a two-lap shootout, with Max having to pass those cars before he got to Lewis. That’s more racy than giving Max such an advantage.

“What we’ve had this year has been very positive for F1 because it has got people talking about it again, which hasn’t been the case for a long time. We didn’t need the last lap to make it exciting.”

However, Herbert calls Verstappen a “deserving champion” and says that neither driver should take any blame for what unfolded.