On October 23 we have election day for the FIA presidency, and as I write both camps – Todt and Vatanen – reckon they are ahead. 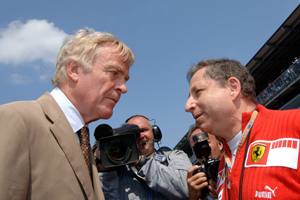 We shouldn’t, probably, be any longer surprised by the actions of the outgoing president, but still there has been shock at Max Mosley’s behaviour in this pre-election period: far from keeping out of the debate, he has made it abundantly clear that he wishes Todt to succeed him.

The theme throughout has been seamless transition from Max to Jean… an undertaking that Todt will strive ‘to continue the great work of President Mosley’.

Vatanen, meantime, has been highly critical of the way in which the FIA has been run these years past, perhaps – being aware of where lie the sympathies of the FIA hierarchy – figuring he had little to lose.

Clearly, though, Ari’s words have registered with some, not least in the Middle East region, most of which is expected to back him. Predictably this has not gone down well – as revealed by a breathtaking letter from Mosley to Prince Feisal of Jordan.

‘It is very unfortunate,’ he wrote, ‘but the campaign run by Ari Vatanen has been marked by untruthful claims, and has now descended to insults such as his recent statements that the FIA is a “stagnant pool” which stinks, and that the entire FIA system is unfair, autocratic and unjust.

‘The more Vatanen criticises the FIA’s policies, and the more insulting and untrue his claims, the more he damages the interests of those associated with him. The FIA membership will naturally assume that his supporters fully endorse his statements.

‘Any thought that, after the election, everyone can unite and work together can now be forgotten. It is not possible to make outrageous and divisive statements like Vatanen’s, and then expect the victims of insults and untruths to forget what has been said.

‘The simple fact,’ Mosley went on, ‘is that Vatanen will lose the election, and lose badly, not least because he chose to denigrate the FIA, and those currently in office, rather than run a constructive and civilised campaign.’

It’s not too difficult to read between the lines here: vote for Vatanen, and you will not be forgiven. I find it astounding that Mosley would commit something like this to print, for the sinister implication is that, after the election, it will be known who voted for Vatanen and who did not – this, despite the fact that, according to the FIA Statutes, the vote must be conducted by secret ballot.

It is particularly remarkable that Mosley should have sent a letter such as this to Prince Feisal, who invited him to the Jordan Rally last year in the immediate aftermath of the News of the World affair, when Max was otherwise short of friends.

Clearly, however, his letter did not have the desired effect, for the prince was understandably outraged. At a motoring conference in Amman on October 1, he responded thus: “Jordan has always maintained a strong relationship with the FIA president, so I am deeply disappointed by the content and the insinuations of his letter, which have raised serious questions as to the credibility of the upcoming and future elections.”

As of now, most believe Todt will win, but there remain many who think it not necessarily a foregone conclusion.

“Actually,” said an insider, “this letter to Prince Feisal suggests to me an insecurity in the Todt/Mosley camp. All the ‘motor sport’ people in the FIA member clubs are supporting them – for all the reasons we know only too well – but the ‘mobility’ clubs are very different. There’s a view that because Formula 1 has the loudest voice that’s what will carry the day, but I’m not sure that’s necessarily the case…”

Stay tuned, as they say.