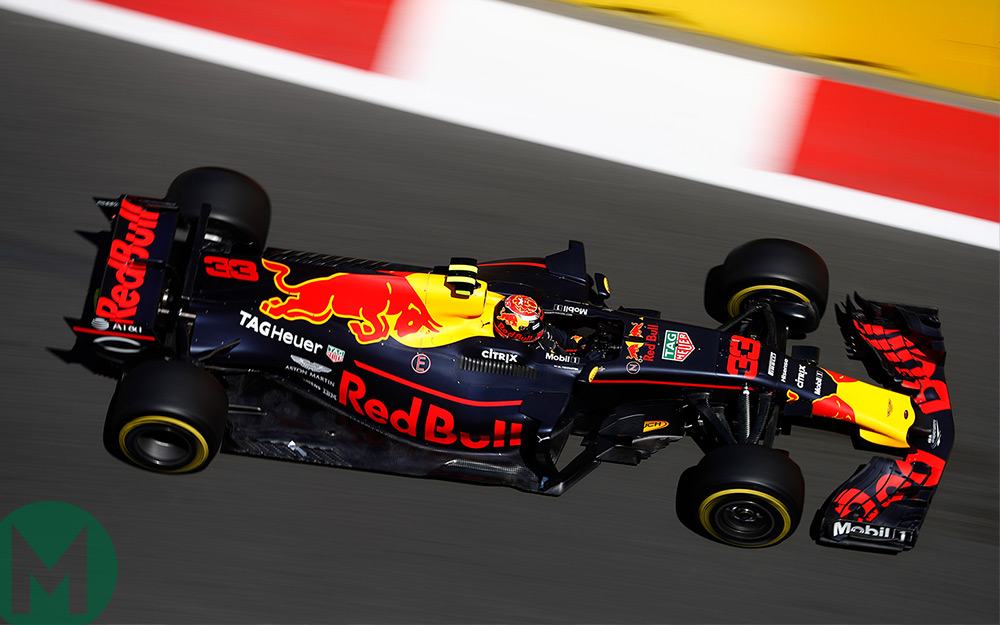 Max Verstappen is arguably Formula 1’s brightest star. He’s exceptionally quick both on a single lap and throughout a race distance, thanks to his beautifully smooth, flowing technique.

Like many of the greats before him, he’s not scared of pushing rules to their limit and is especially aggressive – some say dangerous – during wheel-to-wheel combat.

But what are the secrets of Verstappen’s speed? Why is he so good on those first laps? Is it the naivety of youth and being so fresh out of karts or is there more to it?

As a driver coach, I like to study the minute differences in technique between the F1 drivers. Max is a pleasure to watch and drives with a remarkably smooth and flowing style.

He’s so subtle that when you watch him closely, it’s hard to see exactly when he transitions from a straight line to releasing the brakes and turning towards the apex.

His racing lines are ‘square’, keeping the car in a straight line before corner entry for longer than most other drivers.

This style has positives and negatives; the car’s platform can remain flat for longer, but it means when he arrives at the corner it’s tighter and there is more turning to do.

This technique was most obvious in the rain-soaked 2016 Brazilian Grand Prix, through the final fast left-hander.

Here, Verstappen was turning in late, getting the car’s platform flat early and straightening the corner, meaning he could make the corner shorter and lessen the chance of unwanted oversteer as he crossed the slippery wet rubber.

Lewis Hamilton also drives with this very deliberate approach, while others such as Carlos Sainz drive in a much more aggressive, feel-driven and on-the-limit manner.

In terms of pace advantage over one lap there isn’t much in it, but a squarer style allows a driver more margin for error, slightly more room to make modest mistakes and not lose time.

This in turn opens up more mental capacity to focus on other areas of his racing. That’s why Verstappen is so quick in the wet, so supreme on the first lap and generally a victor in wheel-to-wheel battle.

Onto those fearless first laps. Time after time Verstappen has made serious gains forward, if not necessarily on the race to the first corner, then during the opening lap.

This year’s Chinese Grand Prix is a good if somewhat flattering example. Admittedly he started out of position and it was damp, but moving forward nine positions in one lap is exceptional by any standards.

Just as impressive were his starts behind the safety car at the soaked 2016 Brazilian GP, overtaking Räikkönen late on the brakes into the Senna S and later Rosberg around the outside of turn three, Curva do Sol.

There are, of course, countless dry weather examples of Verstappen progressing confidently – he’s always the driver to watch at the start.

Verstappen’s skill is based on his feel and more importantly confidence on the brakes. Granted, the Red Bull stops very well indeed, but Verstappen perfectly predicts the grip level in a car with sub-optimal tyre temperature and newly full of fuel.

One of his methods is using the green flag lap to great effect. This was again most visible at Brazil last year, before the safety car-controlled start, where he spent those seven laps testing every inch of the track for different grip levels.

In the wet there can be a huge difference in grip levels on and off the rubber embedded in the circuit. The decision for a driver is whether it’s worthwhile going around the outside of the rubber using the higher grip surface, but larger radius.

Surprisingly, he was the only driver exploring the different areas of the circuit to that extreme, braking, turning and accelerating on and off the dry line to piece together a path of greatest adhesion, much like Schumacher would.

What were the other drivers doing? They can all feel the differences in grip levels, so why did Verstappen make most look amateurish?

With F1’s huge downforce levels and modern wet tyres, it’s often no quicker to drive off the rubber in the rain – there’s enough grip on it.

However, a few factors came together in Brazil and the circuit offered the Pirelli tyres so little grip that it was clearly quicker off the dry line.

The established drivers should have known better, it’s disappointing they didn’t, but previous experience had conditioned them and they simply didn’t think to try another strategy. Verstappen’s lack of experience and naivety in this situation actually helped him greatly.

Despite being such a talent, Verstappen is not without his critics. He’s frequently upset some F1’s most experienced drivers with his racecraft and behaviour on track and had the most penalty points of any driver, including Maldonaldo, in 2015.

His defence against Räikkönen at Spa last year was robust, to put it lightly, and triggered a rule change designed to stop drivers moving in the braking zone (which has now been dropped).

Without doubt, some of the defensive moves Verstappen made against Räikkönen and others were dangerous, but he’s clearly highly intelligent and, like Senna and Schumacher before him, he’s willing to push the rules to the absolute limit.

Aside from losing a few front wing endplates, race-ending contact and accidents are a rare occurrence for Verstappen. Until that heavy contact with the wall at Sainte Devote, after he’d expected Grosjean to brake 20 metres later, he’d had a relatively clean start to his maiden F1 season.

Since then he’s only had one DNF due to an accident that was his fault, again on the streets of Monaco. This time in 2016 where he understeered into the outside barrier at Massenet – the third time he’d been in the wall during a challenging weekend.

Most recently, his racing at the Hungarian GP with team-mate Ricciardo was uncharacteristically crude. Verstappen, after getting slowed at the apex of Turn One, thus making a poor exit, had the Australian almost all the way passed.

Verstappen was late on the brakes into the off camber Turn Two, locking his inside front tyre and understeering into directly into Ricciardo’s radiator, ending his team-mate’s race.

This type of incident is uncommon for Verstappen because his racecraft, awareness and general lack of errors means that any contact he may have is really quite controlled.

Some say he’s dangerous, though I don’t think he is – banging wheels in a calculated way and being dangerous are two separate things.

Verstappen simply pushes rules to the limit and has a defiant attitude. He makes F1 exciting, and we must respect his willingness to stretch the boundaries.

There’s no doubt Verstappen, if in a leading car, will become a world champion.

His natural talent and deliberate driving technique allow definitive driving through traffic, which once completely refined will be formidable. He is unquestionably a class act.

Like the greats before him, Max Verstappen is so fast because he doesn’t believe he has any limits. Let’s all hope he stays that way.

Scott Mansell is founder of Driver61.com and a professional racing driver coach, developing drivers throughout single-seater, prototype and GT disciplines.