It seems to me appropriate – with May 1 upon us – to take a break from the current Formula 1 scene, from bickering about not enough noise and too much self-interest, and instead remember that afternoon, 29 years ago, when Ayrton Senna scored the first of his 41 Grand Prix victories. It was, appropriately, what the French like to call une course de mythologie.

It was also, sadly, witnessed by relatively few. In 1985 the price of a grandstand seat at Estoril was about the same as the average weekly wage, and as well as that the weather on race day was atrocious. Only around 10,000 people were able to say they had been there when Senna won for the first time.

What did Senna think?

Many have suggested that Ayrton’s greatest drive was at Donington’s one-off European Grand Prix in 1993, when he went into the first corner in fifth place, yet completed the lap in the lead. Run over the Easter weekend, and in terrible conditions, the race was watched by a meagre crowd, but although Tom Wheatcroft took a bath financially he always said he didn’t care: he had persuaded Bernie Ecclestone to let him put on a race at his beloved circuit, and it would always be remembered for Senna’s virtuosity.

At Imola, the next race, I asked Ayrton if he thought the Donington victory his best to date. He made a face. “No! For sure it was a good one, and not easy – but it wasn’t like Portugal in ’85. At Donington I had a Cosworth, but in Estoril it was the Renault turbo – so much more power! But the biggest difference is that now we have traction control, and then we didn’t…”

If they didn’t agree about much, Senna and Alain Prost were united in their loathing of what were always referred to as ‘gizmos’, and you couldn’t be surprised. As the two greatest of their generation, inevitably they had a distaste for devices – traction control, launch control, even (in ’93) ABS brakes – which necessarily had an ‘equalising’ effect, and thus reduced the impact of genius.

“It’s Villeneuve all over again, isn’t it? A racing driver who’s ahead of his car…”

The previous winter Emerson Fittipaldi had organised a test for Senna in a Penske Indycar at Firebird Raceway, a tiny road circuit near Phoenix, and Ayrton – who ultimately lapped faster than his friend – loved the car. “For sure heavier than an F1 car, and less nimble,” he said, “but very progressive in its handling, and I enjoyed the power. Best of all, driving without computers doing everything…it’s a human’s car…”

If I thought Senna a little too dismissive of his Donington drive in the McLaren, I could understand why Estoril in the Lotus-Renault stood higher in his affections. There may not have been many there to see it, but it was one of those days when one was aware, even as it unfolded, of witnessing a race destined for legend.

I watched it at the first corner with Denis Jenkinson, and remember how exultant he was – rain dripping from his cap, glasses misted up – when Senna took the flag. “It’s Villeneuve all over again, isn’t it?” he beamed. “A racing driver who’s ahead of his car…” 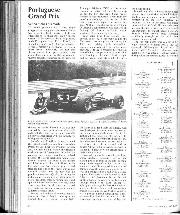 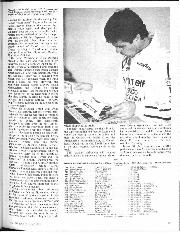 Some time later I mentioned that to Ayrton, and he was much gratified by the comparison with Gilles. “I wasn’t always ahead of the car, though,” he said. “The conditions were so bad that corners were changing, lap to lap, and sometimes the car was driving me…”

Race day morning in Estoril was dry, as practice had been, but by the time of the warm-up the clouds were blackening, and light rain came in at noon. By 1.30 it was pouring down.

Alongside Senna on the front row was Prost’s McLaren, with Keke Rosberg’s Williams and Ayrton’s team-mate, Elio de Angelis, on row two, then Michele Alboreto’s Ferrari and Derek Warwick’s Renault on row three.

After qualifying, Prost, although four tenths slower than Senna, had felt optimistic about his chances. “I didn’t run a lot of boost in qualifying – not much more than we use in the race, actually – so I wasn’t too quick in the straight, but we have a very good set-up for the race.” Sunday’s monsoon put Alain – and everyone else – back to square one, however, and now set-up was a matter of guesswork.

In the modern era conditions such as those at Estoril would inevitably mean a start behind the safety car, then umpteen laps cruising around until it was deemed acceptable to go racing, but back then the safety car hadn’t so much as been thought of. The light went from red to green, and away they went.

After one lap the Lotuses came through 1-2, followed by Prost, Alboreto and Warwick, but if Senna was treading warily, he was doing it way faster than anyone else, capitalising on clear vision as well as his unearthly car control. At the end of the second lap he was three seconds up on de Angelis.

In the spray and murk behind Ayrton, others were having a terrible time, notably Piquet, whose Brabham started in the top 10, but swiftly had a queue forming up behind it.

Even during dry practice Nelson had not been happy: “The track is very dirty off line, and it doesn’t seem to have gained much grip this time – not like last year. Then again, I was on Michelins last year…”

Ah, yes. When Michelin pulled out of F1, at the end of 1984, two of its teams – McLaren and Renault – went with Goodyear, the other two – Brabham and Ligier – with Pirelli. In the wet the difference between the two was even starker: after 16 laps Jacques Laffite parked his Ligier, saying the car was undriveable, the conditions unacceptable, and although Piquet plugged on, making innumerable pit stops – during one of which he alighted from the car, and changed into dry overalls! – eventually he, too, called it a day. “In the car I was cursing Ecclestone,” he said, “for taking Pirelli’s money…”

“The race was like a test session, really,” said Gordon Murray. “No point in getting upset – it was too bad for that…”

The rain, if anything, worsened, and it must be said that Laffite was not alone in his views. After the race Niki Lauda complained loudly about the conditions, and at one point even Senna had gesticulated to officials that they should bring out the red flag.

They didn’t, though, even when Rosberg crashed at the long right-hander before the pit straight, his car bouncing off the guardrail back into the middle of the road, where it came to rest. Keke, his right thumb broken when the steering-wheel flicked back, quickly ran to safety, but there were terrifying moments in the spray as drivers swerved around marshals attempting to remove the beached Williams.

No safety car then, as I said; no facility for continuing the race ‘under yellow’ until the weather improved.

After 30 laps Senna led by more than half a minute, while Prost continued to crowd de Angelis for second place, with Alboreto not far behind them.

By now the rain was heavier than ever, and as Prost came down the pit straight, the McLaren began to twitch, veering left then right before breaking into a spin. Alain could do nothing to keep the car from clouting the wall: “There were deep puddles everywhere, and in the spray it was impossible to see where they were. I was doing close to 300kph, and once you start aquaplaning at that speed, you’re finished…”

Towards the end Alboreto found a way past de Angelis, and Tambay’s Renault also went by the Lotus. “At the end they told me I was third,” said Patrick. “I had no idea – I could have been 13th…”

After 67 of the originally scheduled 69 laps, the two-hour mark was passed, and Senna was given the chequered flag, more than a minute clear of Alboreto. Even before reaching the first turn he had flung off his belts – a penalty-incurring offence in this day and age – and was half out of the car, waving both arms in joy.

It had been a drive for the gods, but later Ayrton’s exuberance gave way to sober reflection. “The big danger,” he said, “was that conditions changed all the time. Sometimes the rain was very heavy, sometimes not. I couldn’t see anything at all behind me. It was difficult even to keep the car in a straight line sometimes, and for sure the race should have been stopped. Once I nearly spun in front of the pits, like Prost…

“People are saying I made no mistakes, but I’ve no idea how many times I went off! One time I had all four wheels on the grass, out of control… but somehow the car came back on the circuit. Everyone said, ‘Fantastic car control’, but it was just luck – and luck, too, that TV missed it!”

By the 1980s Jenks was into his ‘Don’t talk to racing drivers any more – waste of time’ phase, but he had made an exception to his rule with Villeneuve, and was now about to make another. When Senna boarded his flight back to London on the Monday morning – yes, a regular commercial flight – he found himself sitting next to the little man with the beard.

The two had never spoken before, but Ayrton had long read about motor racing, knew all about Jenks, and appreciated the extent of his wisdom and experience. All the way back to Heathrow they chatted animatedly, and by the time the aeroplane touched down, DSJ had a new hero.

He wasn’t there at Imola nine years later, but we talked things through when I got back. “May 1…” he murmured sadly. “We won the Mille Miglia on May 1, and I’ve always associated that date with such happiness. Now this…” There wasn’t much I could say.